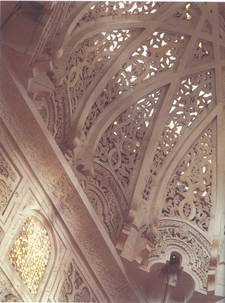 The Great Mosque of Tlemcen as a whole is an architectural masterpiece however, the techniques introduced in the construction of the mihrab dome are the most innovative. It is one of the oldest and best…

Muslims minted their first gold coins when they entered Spain in 711CE. The new coins were modelled in size and design after the Arab-Byzantine but their inscriptions were in Latin. A large star in the…