Muslims ruled in Spain and Portugal over a period of 800 years. When the Christians finally forced out the Muslims and instituted the inquisition they encountered some of the great achievements of Islamic science and civilisation. Today much of this heritage can still be found.

Dr. Ghazanfar is a long-time resident of the U.S.A, born in pre-partitioned India, migrated to Pakistan in 1947 and moved to the USA as a student in 1958; having served as Professor and Chair, Department of Economics, University of Idaho, Moscow, Idaho 83843 (USA), he is presently professor-emeritus (retired, 2002.)

For a Muslim who has some familiarity with Islamic history in the Iberian Peninsula, a visit to this country is almost like a pilgrimage. However, unlike the pilgrimage to Makka, such a visit can be spiritually and emotionally agonizing, for one is overwhelmed by manifestations of European Islam in Spain (Al-Andalus, as it was then known). That was the era of the Golden Age of our civilisation extending from early eighth to late fifteenth century, coincidental with Dark Ages in the rest of Europe, when Al-Andalus was the centre of global civilisation. Its capital Cordoba was Europe’s largest city–the city of books, of patrons of great literary men, scholars and explorers. There existed no separation between science, wisdom, and faith; nor was East separated from the West, nor the Muslim from the Jew or the Christian. It was here that the European Renaissance began and flourished beyond. 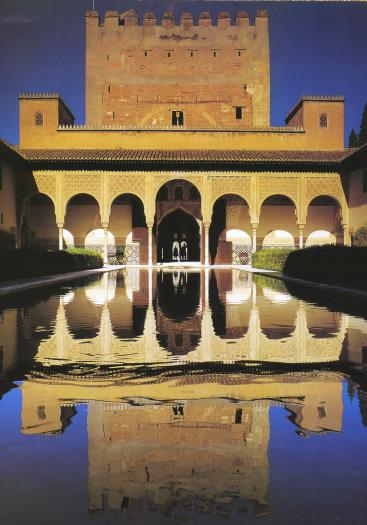 For decades I had longed to visit Spain, not only for its legendary charm and picturesque beauty but, more importantly, to witness the heritage of almost eight hundred years of Islamic presence. In December 1998, I travelled to Spain as a participant in a colloquium, sponsored by the Paris-based International Society for the Study of Arab and Islamic History and Science (in conjunction with Spanish universities). The conference theme pertained to the contributions of Cordoba’s most distinguished intellectual, Ibn Rushd (1126-1198; known as Averroes in the West) in commemoration of the eight hundredth anniversary of his death.

The trip also provided me with an opportunity to experience Spain’s Islamic heritage. Such heritage, indeed, has reminders in every nook and cranny of contemporary Spain, especially in the province of Andalucia. That is where the two most prominent cities of Islam’s legacy are located: Granada (Arabic Gharnata) and Cordoba (Arabic Qurtaba); both are listed as United Nations’ cities of “Heritage of Humanity”. Conveniently these cities are well-maintained by Spanish Government mainly for their huge significance for tourism, notwithstanding the many threats made by Catholic fanaticism to destroy this prestige. Soon after landing in Madrid (Arabic Majrit, a kind of a breeze), I took a night train to Granada, arriving there the next morning.

While such impressive monuments of Islamic history, that one encounters in Spain, represent a tangible legacy of this great civilisation, there are many others that are less tangible for being parts of daily lives which are often taken for granted. Perhaps the most telling example of continuing Islamic influence is the survival of myriad Arabic words and phrases in the Spanish language, such as almirante (al-amir), almohade (al-mohtasub), arroz (al-ruz), guitarra (al-quitara), aceituna (al-zaytuna), and many others. Further, famous words such as “Ole’! Ole’!” during the Flamenco dances and Spanish bullfights, are the unwitting reference to “Allah! Allah!”, while the Spanish/ Portuguese word “Oj’ala'” (God willing) is uttering the distorted version of Arabic “Insha-Allah.”. This is to list a few as there is so much more, including many customs and traditions that are dated from the Islamic past, despite the many attempts of the Inquisition to eradicate them.