Bettany Hughes is an advisor to the Foundation for Science, Technology and Civilisation (FSTC) and member of its consultant network Muslim Heritage Awareness Group (MHAG). Her Youtube films on East/West understanding produced by FSTC were part of the content that won Queen Rania's Youtube first ever Visionary Award. 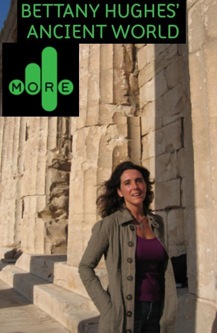 Starting on Wednesday 24th March 2010 at 9pm on More 4, Bettany Hughes, author, academic and broadcaster, presents a seven week season of films about the Ancient World. The series starts with a new documentary about the neglected culture of Alexandria. As part of the documentary, the programme will be exploring the life of the philosopher and mathematician Hypatia (died March 415), a Greek scholar from Alexandria in Egypt, considered the first notable woman in mathematics, who also taught philosophy and astronomy.

Bettany Hughes is an advisor to the Foundation for Science, Technology and Civilisation (FSTC) and member of its consultant network Muslim Heritage Awareness Group (MHAG). Her Youtube films on East/West understanding produced by FSTC were part of the content that won Queen Rania’s Youtube first ever Visionary Award.

Bettany Hughes’ TV and Radio Programmes for Channel 4 and the BBC include Athens – the Truth About Democracy, When the Moors Ruled Europe, and Seven Ages of Britain. Her most recent book Helen of Troy has now been translated into ten languages. She is currently writing a book on Socrates.

She has written and presented a number of documentaries for television including When The Moors Ruled Europe, Helen of Troy and The Spartans for Channel 4. In recognition of her contribution to research, Bettany has been awarded a Research Fellowship at King’s London. Bettany Hughes lectures throughout the world. She has been invited to universities in the US, Australia, Germany, Turkey and Holland to speak on subjects as diverse as Helen of Troy and the origins of female ‘Sophia’ to concepts of Time in the Islamic world. She considers her work in the lecture hall and seminar room amongst the most important, and rewarding she does.

Next year Bettany will be a judge on the international literary Orange Prize and will be starting a major new series for BBC Radio 4. With Bahcesehir University and Lion TV she is producing a landmark 13 part series ‘The River Runs West’ on the story of the collaboration of world civilisations – starting East and working West, working in conjunction with the Civilisation Studies Centre in Istanbul.