In year 642AD, A'mr Ibn Al-Aas laid the foundations of the first and oldest Mosque in Egypt and Africa. Measuring 25 meters long by 15 meters wide it was a simple structure and imitated the Prophet's mosque in Medina.

Under the leadership of A’mr Ibn Al-Aas, the first Muslims reached Egypt on 6th April 641 CE. They camped in a location near to today’s Cairo before entering Alexandria.

Despite its fame as the Greek and Roman capital city of Egypt, they discarded Alexandria in favour of their camp site which they later transformed into a new capital known as Al-Fustat. Historians argued that such a decision was undertaken for safety reasons. Floods from the River Nile were known to regularly hit the city, often cutting it off from the mainland for a number of months.

These risks made A’mr choose a new capital for Muslim Egypt. Nevertheless, one cannot dismiss the desire of the Muslims to set up the new capital to signal the divergence of the new (Muslim) Egypt from the old pagan one. Thus the town was founded in similar manner to other cities such as Kairawan (Tunisia), Basra and Kufa (Iraq), all of which were military camps transformed into cities for the teaching of new Muslims.

In relation to the naming of the new city, Al-Fustat, some orientalists (e.g. Creswell, 1958) linked it to a Byzantine palace called Fassatum that they claimed then existed on the site which the Arabs transformed into Al-Fustat. The real story as told by Muslim chroniclers is related to A’mr’s tent, in Arabic Al- Fustat, which he had set in the centre of the camp.

After deciding on the site, A’mr had it subdivided into plots of land, which he distributed to various tribes of the community. In year 642, he laid, on the site of his tent, the foundations of his mosque which was 25 meters long and 15 meters wide. It is thus considered to be the first and oldest Mosque in Egypt and the whole Africa. It was a simple structure imitating the Prophet’s mosque in Medina, built and covered mainly with mud mixed with grass and had palm tree trunks as supporting columns. The mosque was a single building without a courtyard and had four doors. The first two were opened in the northern wall for public use. The second set of doors were made on the western wall connecting with Dar Al-Imara, the Governor’s headquarters.

A’mr Mosque underwent several modifications and changes introduced by subsequent leaders of Egypt to become one of the most magnificent mosques of Islam. The succession of these changes, some of which started early, completely destroyed the historic building so that it became difficult for historians to build an accurate picture of the original structure. The worst modification to take place was made in 1796 following the collapse of many walls of the mosque while repair works were being carried out on the roof. The person in charge of the repair works, Emir Murad Beck, decided to wholly demolish and rebuild it. His work obscured much of the original design by reducing the number of rows of columns from 7 to 6. He also transferred the position of the arcades (aisles) from originally parallel to the Qibla wall, to intersecting with it. This restoration is also considered to be a disaster for the mosque which lost much of its historic heritage (Creswell (1958), p.181).

The mosque is famously known as Taj al-Jawamie (Crown of Mosques) which shows its significance in the land of Islam and in Africa in particular. It is also named as Masjid Ahl ar-Rayeh (Mosque of the (Islam’s) Banner Bearers), a reference to the many Prophet’s emissaries who brought the Banner of Islam to Egypt and Africa. S.M. Mohammed cited six companions including Abu Thar Al-Ghaffari, Al-Zubeir Ibn Al-Awam, Al-Mukdad, Obada Ibn Al-Samit, Abu-Dardaa, and Abu Bassirah in addition to A’mr himself. All of these are also known to have helped in the building of this mosque. A’mr Mosque is known by a third name, the Jamie’ al-Ateeq (the old Mosque) which records its historicity as the first mosque in Africa and the fourth major mosque after the Prophet’s mosque in Medina and the mosques of Kufa and Basrah.

The original architectural elements that remained from the ancient mosque include a few arched windows, and a few transversal wooden supports that lay above the columns. These wooden supports often have delightful decorations based on the use of floral motifs in the form of wine leaves. The pattern is composed of vine branches, which are interlaced together producing circles filled with five pointed leaves. A partially enclosed column is believed to have been miraculously transported from Makkah and there are some remains of the old minaret. 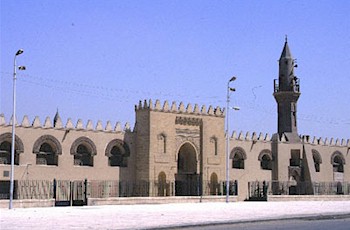