Captain Buzurg ibn Shahriyar, a shipmaster from Khuzistan compiled a collection of stories and accounts of his experiences as a sea farer between 900 and 953. As well as stretching one's imagination, Captain Bazurg's ‘The Book of the Wonders of India' also provides insightful details of the world inhabited by Captain Bazurg and his contemporaries. 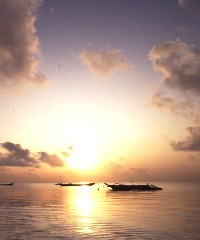 Captain Buzurg Ibn Shahriyar from Ramhormuz (in the Province of Khuzistan) was a shipmaster of the 10th century AD probably from Siraf on the north shore of the Gulf. In approximately AD 953 he completed a collection of sailor’s tales that he had acquired in Siraf, Oman and elsewhere. The locations of these tales range from the Gulf and nearby Arabia and Persia, to as far as India, Malaya, Indonesia, China, and even East Africa. Some of the tales are dated between AD 900 and Ad 953, and are salty stories of trading adventures and escapades, extraordinary profits and utter destitution, mermaids, monkeys, elephants, turtles, giant lobsters and huge birds. Some tales have religious motifs, recalling the deep piety of seafarers of all nations. All these ‘yarns’, as we now call them, belong to the fantasy genre with others such as Sinbad, The One Thousand Nights and a Night, and later, Boccaccio and our own Chaucer.

Siraf was then the most prosperous port in the Middle East. It linked the Abbasid Caliphate of Baghdad with the Tang Empire, and its successors in China, as well as having strong links with several states of distinction in India and the Far East. Dr David Whitehouse’s excavations at Siraf have quite recently revealed some idea of its wealth. His definitive work is eagerly awaited. Al-Ramhormuzi’s Book of the Wonders of India, gives us some idea of the men, and the courage, that produced that wealth. Most of his tales have a solid substratum of fact, the human side of economic history. English translator, Freeman-Grenville points out however,

`Buzurg never states his intention explicitly, nor discusses style. A passing reference at the end of section XX apologises for a digression, and disclaims all intention other than to describe “the wonders of India”. Implicitly, his object is to please, to amuse and to entertain with a fund of stories garnered from other shipmasters and sea-captains, and occasionally from simple sailors. It is good ward-room talk. This is not to say that all the stories are frivolous. On the contrary, his opening tale is one of conversion to Islam, and there are not infrequent references to religion elsewhere. Then there are tales of tragedies at sea, of miraculously profitable voyages, and of total loss. Then there are anecdotes about animals, birds and fish, and the vagaries of foreigners. There are occasional tales about women, some in quite frank language, but never vulgar. Especially touching is section XC ‘A Woman’s Tale’. The subjects are wide-ranging, and Buzurg’s moods reflect every feeling from the sublime to the absurd’.

The following owes to the welcome edition and translation by Freeman-Grenville . This translation begins with al-Ramhormuzi’s account of an Indian monarch’s conversion to Islam.

`WITH regard to India, Abu Muhammad al-Hasan b. Amr b. Hammawayh b. Haram b. Hammawayh al-Najiramy informed me at Basra:

‘I was at al-Mansura in 288/900, and an old man of the town, one of those one can trust, told me that the King of Ra, one of the greatest kings in India, called Mahruk b. Raiq, who lived in a country lying between Upper and Lower Kashmir, wrote in 270/883 to the ruler of al-Mansura, who was called Abdallah b. Umar b. Abd al-Aziz, to ask him for a translation of the law of Islam into the Indian language. So Abdallah sent for a man who happened to be in al-Mansura, an Iraqi by origin, who had a penetrating mind and good intelligence. He was a poet, who had been brought up in the land of the Hindus and knew their different languages. They made known to him the King of Ra’s request. So he wrote a poem which set out what was needful, and sent it to the King of Ra. When it was read to him, he thought it very beautiful, and wrote to Abdallah to send the author to him. He was sent to him, and stayed for three years; and then he returned. Abdallah asked him about the King of Ra; he explained what he was like and how he had left him already a Muslim at heart and in speech, but that it was not possible for him to make the profession of faith in Islam openly, for fear of damaging his position and losing his royal authority. Amongst other things he recounted that [the King] had asked him to explain the Qur’an in the Indian tongue, which he did.

‘When I reached the explanation of the Sura Ya Sin, he said, I translated to him this word of God—to him be glory and power:

“Who will resurrect these dry bones for me? Reply! He who created them in the first place: he knows all creation”.

‘[The King] was then seated on a golden throne encrusted with precious stones and pearls beyond price.

‘I did so. Then he came down from his throne and walked barefoot on the ground, which had been sprinkled with water and was damp. He laid his cheek on the ground and wept until his face was dirty with mud. Then he said to me: “That is he, the lord who is to be adored, the First, the Ancient, whom none resembles”.

‘He had a house built which was reserved for himself, and announced his intention of retiring there to reflect on important matters. He prayed there secretly, without anyone seeing him. He said that on three occasions [the king gave him 600 mann of gold’ .

The next story is that of Said the Weaver:

‘MANY sailors have told me the story of Said the Poor Man from Aden, and told me why his children are rich. All the stories agree with what I am going to say.

‘Said was a poor man, who lived in Aden, and wove baskets and other things from palm leaves. He was constant in attending the mosque, and present at all the prayers. He had three sons who lived much as he did. A sailor friend of his fitted out a ship for Kala. When it was time to leave, he came to him and said:

“Is there anything I can do for you?”

‘Said bought a green jar for half a dirham and some coarse salt for afals, which he put in the jar. He sealed and gave it to the sailor, saying,

“And what shall I buy you?” said the sailor.

“Buy me a blessing, as people say”.

‘The ship sailed and reached Kala. They sold the cargo, and the ship-owner forgot about the jar. But, one day when reloading was already finished and all prepared to go to sea, he saw a man in the market at Kala with a fish on the end of a string calling out:

“Who wants to buy a blessing?”

This made him remember what Said had said.

“What is that?” he said to the man with the fish.

He answered: “It is a kind of fish they call a blessing”.

‘Good Heavens! thought the sailor. Perhaps it is exactly what Said was saying. And he bought it, giving two ounces of salt in exchange. He made the merchant wait, and sent one of his men on board to bring the jar. He gave the man the agreed amount, and had the fish carried to his lodging. They prepared the fish for salting with the rest of the salt. When they drew it, they found many shellfish, and, among them, an oyster shell with a large pearl.

“See the gift that God has sent Said!” cried the captain.

‘The salt fish and the pearl were put on one side, and the sailors set sail. The ship reached Aden safe and sound. The captain gave the pearl to Said, who lived only for a short while after he had received it. After he had died, his youngest son took the pearl, and went to Samara, to the Caliph al-Mutamid. He sold it to him for 100,000 dirhams. It was worth more than double.

The Final story extracted from Al-Ramhormuzi is on Kashmiri diamonds.

`Someone who had been to India told me he had heard it said that the purest, the most beautiful, and the most precious diamonds come from the Kashmir region. There is a valley between two mountains, where a fire burns ceaselessly, night and day, winter and summer. It is there that the diamonds are. Only low-caste Indians risk themselves in this dangerous country. They gather in bands, and reach the entrance to the valley. They kill lean sheep, and cut them up into bits. Then they fling the pieces one after another into the valley, by means of a mangonel that they set in motion. There are many reasons that prevent their access to their valley. First, there is the ever- burning fire; and, in addition, around the fire, there is an uncountable number of snakes and vipers, so that no man can go there and not perish.

‘When the meat is thrown, a great number of vultures falls on it and seizes it. If it falls some distance from the fire, they carry it off. They follow the vulture as it flies. Sometimes a diamond falls from the meat that has been carried off. If the vulture comes down in some place to eat it, they go to there and find diamonds. If the meat falls in the fire, it burns. The vulture that wants to seize a piece too near the fire burns likewise. Sometimes also, by chance, a vulture seizes meat in flight, before it reaches the ground.

‘This is how diamonds are gathered. Most of the people who busy themselves looking for them die from the fire, or from the snakes and vipers. The kings of these countries are very fond of diamonds, and go to great trouble to get them. Those employed in this work are watched carefully, because of the beauty and high price of the stones.’