To celebrate the launch of 1001 Cures; Contributions in Medicine & Healthcare from Muslim Civilisation, Bettany Hughes, Prof. Peter Frankopan, Dr. Aarathi Prasadand Prof. Peter E. Pormann participated in a panel discussion were they discussed the forgotten pioneers and their contributions to medicine and helthcare. Below are some short interview video clips with the panel members as well as the full video of the panel discussion...

To mark the launch of “1001 Cures: Contributions in Medicine & Healthcare From Muslim Civilisation,” a new multi-author book Editor Prof. Peter Pormann, with a foreword by Sir Magdi Yacoub, the Foundation for Science, Technology and Civilisation (FSTC) in partnership with Healthcare Development Holding Company (HDH), held a special event and reception that was hosted at The Royal Society, 6-9 Carlton House Terrace, London SW1Y 5AG from 5:00 to 8:30pm on Wednesday 14 March,.

On the 14th of March 2018, a new publication called 1001 Cures; Contributions in Medicine & Healthcare from Muslim Civilisation was launched at the Royal Society in LondonForgotten pioneers and their contributions to medicine and healthcare were unearthed through a series of exciting panel discusions and activities. Through the discussions, it was revealed just how diverse this healthcare and medical tradition was, one which stretched from Spain to China and included the likes of the African continent, much of the Middle East, the Indian sub-continent, Eastern Europe and Central/East Asia.Pupils from London schools attended morning educational events organised by 1001inventions on Cures from the East. They  witnessed an inspiring live drama show and participated in a range of scientific demonstrations and hands-on workshops that simplified and further engaged the young pupils on health and medical concepts.In the afternoon a panel discussion took place preceding the book launch. The panel consisted of Professor Peter E. Pormann, Dr Aarathi Prasad, Professor Peter Frankopan and Bettany Hughes. The day was ended by giving free copies of the 1001 Cures book to all attendees during a brief book signing by the editor. 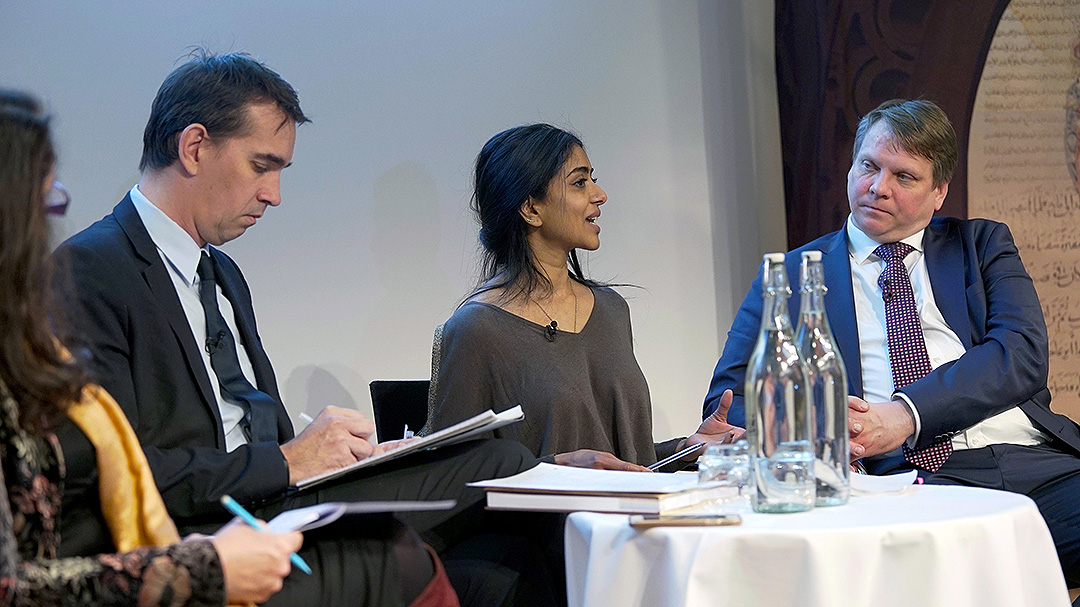 After studying Classics, French, and Islamic Studies in Paris (Sorbonne), Hamburg, and Tübingen, I took an MA in Islamic Studies at the University of Leiden, and an M.Phil. and D.Phil in Classics at the University of Oxford (Corpus Christi College). As an undergraduate, my prime motivation in choosing Classics was to understand ‘our’ Western culture, for surely its two main roots were Graeco-Roman Antiquity and the Judaeo-Christian tradition. Little did I know that a third ‘root’, Islamic culture, is intrinsically linked to our own tradition, a fact conveniently forgotten by ideologues of different persuasions. My teaching and research therefore tries to rectify this misconception by investigating the many contacts between Muslims, Jews, and Christians writing in Greek, Latin, Hebrew, and Arabic, be it in the tenth or the twentieth century. 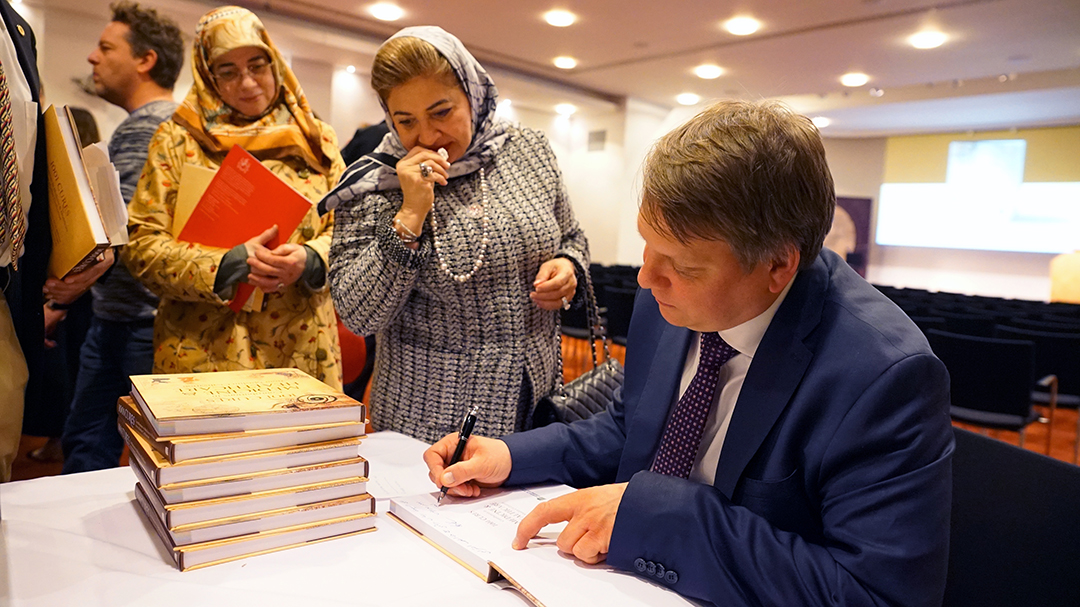 Aarathi is the author of In the Bonesetter’s Waiting Room: travels through Indian medicine (Profile / Hachette, 2016) which was featured as BBC Radio 4 Book of the Week and won the Popular Medicine Award at the BMA Awards 2017; and Like A Virgin: how science is redesigning the rules of sex (Oneworld, 2012, with translations in Dutch, Italian, and Bulgarian). She was a contributing author to What the Future Looks Like: Scientists Predict the Next Great Discoveries―and Reveal How Today’s Breakthroughs Are Already Shaping Our World (Profile, 2017), edited by Professor Jim Al-Khalili; and has written for the Guardian, Prospect, Scientific American, Wired, The Lancet, Vogue, Elle, and other publications.Professor Peter Frankopan

Peter Frankopan is Professor of Global History at Oxford University, where he is also Senior Research Fellow at Worcester College, Oxford and Director of the Oxford Centre for Byzantine Research.He is Scaliger Visiting Professor at Leiden University. He works on the history of the Mediterranean, Russia, the Middle East, Persia/Iran, Central Asia and beyond, and on relations between Christianity and Islam.

Bettany Hughes is an award-winning historian, author and broadcaster, who has devoted the last 25 years to the vibrant communication of the past. Her speciality is ancient and mediaeval history and culture. A Scholar at the University of Oxford, she has taught at the Universities of Oxford and Cambridge and lectured at Cornell, Bristol, UCL, Maastricht, Utrecht and Liverpool and Manchester. She is a Tutor for the University of Cambridge’s Institute of Continuing Education and a Research Fellow of King’s College London. In 2017 she joined New College of the Humanities as Visiting Professor.

Al Firdaus Ensemble based in Granada was founded in 2012 by the English violinist and singer Ali Keeler and includes musicians from England, Spain and Morocco.

The group takes its inspiration from the word Firdaus, which is the Arabic name, of Persian origin, for the most elevated abode in Paradise. The intercultural nature of this name reflects the character of the group in which musicians from different countries and cultural backgrounds are brought together with one purpose. Just as the musicians tune their instruments, so they need to tune their hearts to receive the inspiration of the moment and transmit that to the audience. The traditional Arabic term for this kind of music is sama` which could be translated as “the art of listening”.Here is a clip of their performance durring the 1001 Cures book launch at the Royal Society, where they demonstrated a typical, classical Andalusian musical piece as well as a ‘Celtic’ themed piece, praising the Prophet Muhammed:

A Tribute to Prof Rabie

At the end of the programme, a tribute was given to Professor Rabie El Said Abdel-Halim, eminent expert in urology, poet and well-known historian of Islamic medicine. The tribute was from Prof. Glen Cooper and read out by Dr Sharif Kaf al-Ghazal. Prof.Rabie describes in the introduction of his book (History of Islamic Medicine) how from the start of his career as doctor he was inspired by the sentence of George Sarton that if we do not understand the history of scientific knowledge we will not be able to add to it. Professor Abdel-Halim describes in detail the contributions of the physicians and medical authors of the Islamic civilisation to various fields of medicine, from urology, to anaesthesia, surgery, anatomy, and others. For him, one of the most inspiring lessons we learn from the history of medicine and the history of science is that these disciplines broaden our world viewpoint and outlook to life. A thoughtful study of the history of science is bound to strengthen a unique feeling of brotherhood, unity and universality of mankind. [Interview with Professor Rabie E. Abdel-Halim]

My purpose here is to remember the life and work of Prof. Rabie E. Abdel-Halim, who was a great friend of the Foundation for Science Technology and Civilisation. Dr. Rabie passed away suddenly April 15, 2015…””… The relationship of Islam and healing, as Dr. Rabie taught, is that Islam is concerned with the two-fold healing of the body and mind of a person. That Muslim medical thinkers were concerned to heal the body is obvious from the contributions to medicine that we have been discussing at this Congress. The second part, namely, the healing of the mind, may be less clear to us moderns. Islam aims to heal people’s minds from ignorance or lack of understanding of the pure principles of Islam, which are the essential principles of human existence. (Remember that the Pre-Islamic period in Arabia is called jahiliyya, “[The era of] ignorance”). For some Muslim thinkers, this healing of the minds or psyches involves a systematic organization of the whole body of rational thought, as Ibn Sina sought to do in his Kitāb al-Shifā’, a vast encyclopedia of knowledge…” Prof Glen Cooper

Professor Rabie was not just a colleague but a close friend to the FSTC family and a mentor to the young members of the team. He was noticeably kind, humble and an exemplary true gentleman…” Prof Salim Al-Hassani 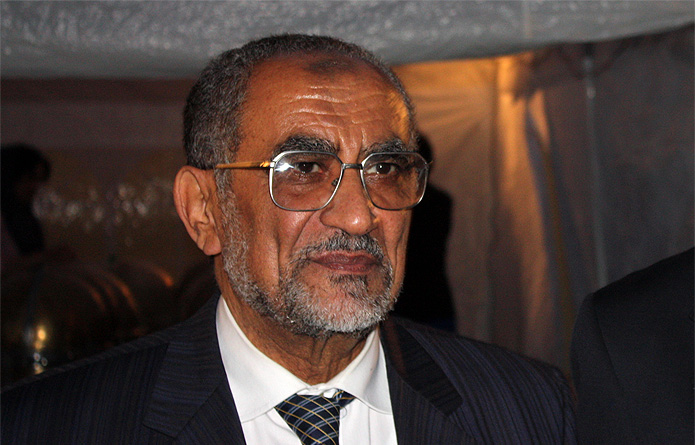 The choice of the title 1001 cures like its predecessor publication 1001 Inventions, reminds us of the famous 1001 Nights or the Arabian Nights. These were allegedly stories to entertain the caliph of Baghdad Harun al-Rasheed who, like his son Al-Mamoon, was a patron of the arts and mathematics. During their period the movement of translation of philosophical, cultural and medical heritage of the antiquities in the Middle East, North Africa and Central Asia in the high middle age. This is demonstrated in this superb volume. It is a substantial contribution to this important point of the history of Medicine and Healthcare. It comes at a time when the world desperately needs intercultural understanding and appreciation. It is an unalloyed pleasure to commend it to you.

1001 Inventions is an award-winning, British based organization that creates international educational campaigns and engaging transmedia productions aiming to raise awareness of the contributions to science, technology and culture from the Golden Age of Muslim Civilisation.1001 Inventions has engaged with over 350 million people across the globe working with a network of international partners, including UNESCO, National Geographic and leading academics to produce interactive exhibits, short films, live shows, books and classroom learning materials that are being used by hundreds of thousands of educators around the world.

About the Royal Society

The Royal Society is the national academy of science in the UK. It is a self-governing Fellowship of many of the world’s most distinguished scientists. A major activity of the Society is identifying and supporting the work of outstanding scientists. The Society supports researchers through its early and senior career schemes, innovation and industry schemes, and other schemes. The Society facilitates interaction and communication among scientists via its discussion meetings, and disseminates scientific advances through its journals.The Society also engages beyond the research community, through independent policy work, the promotion of high quality science education, and communication with the public.

STC is a UK-based research and publishing educational non-religious non-political entity, which was formed in 1999 to popularise, and promote an accurate account of historical contributions from Muslim and other cultures to science, technology and civilisation. It is a non-profit organisation that boasts an international board of trustees, advisors and learned scholars and dignitaries.It brings together a unique online community of Muslims and non-Muslims at www.MuslimHeritage.com, a website dedicated to raising awareness of the contributions of male and female scholars of different faiths from Muslim civilisation. It organises conferences, develops resources, provides lectures, and delivers training courses on a wide variety of topics deriving lessons from the past for building a better future. .