During "The First Regional Conference on the Knowledge Economy" in Jeddah, Saudi Arabia, January 12-13, 2008, attended by over 300 experts and professionals as well as several VIPs, Professor Salim Al-Hassani delivered a key note speech in which he presented the touring exhibition "1001 Inventions" and the work undertaken by the Foundation for Science Technology and Civilisation (FSTC) to promote Muslim Heritage. 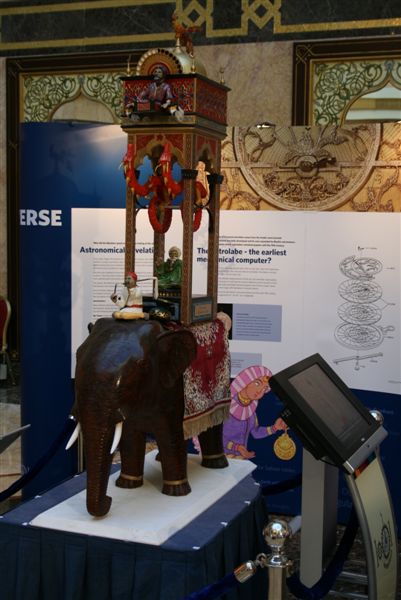 Click here for the video file of the conference.

During “The First Regional Conference on the Knowledge Economy” at Dar Al-Hekma College in Jeddah, Saudi Arabia, from January 12-13, 2008, attended by over 300 experts and professionals as well as several VIPs, Professor Salim Al-Hassani delivered a key note speech in which he presented the touring exhibition “1001 Inventions” and the work undertaken by Foundation for Science Technology and Civilisation (FSTC) to promote Muslim Heritage.

Departing from the fact that the history of science and civilization, as taught by many institutions in the West, often fails to include about 1000 years of Islamic heritage and civilization, Salim Al-Hassani remarks, while speaking at Dar Al-Hekma College in Jeddah on January 14, 2008, that “the Renaissance couldn’t have happened out of nothing (…) In the West, there is total ignorance of the contributions of other civilizations. Did modern civilization really rise from nothing?”

Al-Hassani explained how many Western discoveries are of Muslim origin. He stated that there was a lost age of Muslim innovation and invention that Muslims are not communicating to the West. Further more, that these Muslim contributions are not included in the the history syllabus or textbooks either.

Focussing on a contrroversial issue, that of women in Muslim society, he remarked that during Umar ibn Al-Khattab’s reign in 634 H, Muslim women took the lead in different ways. The Caliph Umar appointed Samra bint Nuhayk Al-Asadiyya as a market inspector in Makkah and Ash-Shifa bint Abdullah as an administrator of the market in Madinah. “Later, Ash-Shifa was appointed as the head of health and safety in Basra,” said Al-Hassani.

Al-Qarawiyyin, a spiritual and educational center that led the Muslim world for over 1200 years, was founded and built in Fez, Morocco, in 859 CE by a young princess, Fatima Al-Fihri, who migrated with her father Mohammed Al-Fihri from Qairawan (Tunisia) to Fez.

“Fatima vowed to spend her entire inheritance on building a mosque suitable for her community. This remarkable story is a typical example shedding some light on the role and contribution of women to Muslim civilization. Such a role is the subject of widely held misconceptions about Islam,” said Al-Hassani.

In 1993, Prince Charles said in a public speech at the Oxford Center of Islamic Studies that if there was much misunderstanding in the West about the nature of Islam, there was also much ignorance about the impact of Western culture and civilization on the Islamic world.

“It is a failure which stems, I think, from the straitjacket of history which we have inherited. The medieval Islamic world, from Central Asia to the shores of the Atlantic, was a world where scholars and men of learning flourished,” said Prince Charles. “But because we have tended to see Islam as the enemy of the West, as an alien culture, society and system of belief, we have tended to ignore or erase its great relevance to our own history.”

Salim Al-Hassani devoted a part of his talk to another topic, that of the best way to acquire science and technology in the modern Muslim world. He noted that the Gulf states were working vigorously toward achieving higher levels of electronic innovation, communication and information technology, the Internet and electronic services in view of the higher levels of incomes generated by soaring oil prices.

But, the interest shown by Muslim countries in all forms of electronic services does not go beyond usage despite the fact that more than three decades have passed since the invention of the (computer) processor. This, in fact, is a disturbing situation. Will the share of the Muslim countries in the IT industry be similar to their share in the traditional industry? Moving from an economy that relies mainly on selling raw materials to one that is knowledge-based is not merely a vision, but a struggle that might take decades to realize.

For Muslim countries to move toward a knowledge economy and benefit from its results that lead to sustainable economic growth and development, they need to face various challenges. They need to have clear strategies to stimulate the knowledge economy through the development of policies and mechanisms. These include giving priority to teaching and training future generations; encouraging innovation and research, especially in modern technology and means of communications; motivating students to learn as a lifelong exercise; providing teaching aids and educational training for teachers; and reviewing the strategies of education from time to time, said Al-Hassani.