Ibn Tulun Mosque is a rare example where Europeans openly admitted its influence on the development of many features of their architecture. Elements such as the pointed arch, the pier, and wall battlements formed the essential ingredients of the birth of Gothic architecture, which led Europe to the Renaissance.

Ibn Tulun Mosque is the oldest, best-preserved mosque in Egypt1. It is named after the Emir Ahmed Ibn Tulun2, a soldier among the troops of Samarra who was promoted to rule Egypt between 868 and 883AD.

Following the tradition of Muslim Caliphs, the first work of Ibn Tulun was to establish a new capital known as Qataia (869 CE) between Cairo and Fustat.

In its centre, he built a palace complex, a hippodrome, and a large mosque which became known by his name. According to the inscription found in the mosque, it was completed in May 879 CE.

Western sources, quoting Al-Maqrizi, claim that the architect of the mosque was an Egyptian Christian who proposed to employ piers as a substitute for the large number of columns necessary to support the roof span of this mosque’s magnitude3. Fikri (1961 CE) dismissed this as another attempt to connect successful Muslim work to Christian origin. He argues that firstly, it is well known that Ibn Tulun lived in Samarra all his youth and he was clearly influenced by its prestige especially its Great Mosque of Al-Mutawakkil (848 CE).

This can be seen in the numerous common features of the two mosques. The first of these is the use of piers constructed of brick, instead of columns, to carry the arcades and the roof. Secondly, is the use of the same materials of construction such as brick and plaster. Thirdly is the spiral shape of the minaret and its location outside the perimeter of the mosque. An Egyptian Christian architect could not have by chance employed these features independently of Samarra. Fikri quoted Al-Maqrizi himself, in the same source, reporting another different story about the circumstances of the construction of the Mosque. He reported that Al-Qudhai narrated that Ibn Tulun asked for advice about: “the construction of a building that would stand the fire if the whole of Egypt was to be consumed by it, and stand a flood if the whole of Egypt was to be submerged by it.” He was told to build with plaster, ash and red brick, and not to erect any columns of marble as they do not stand well against fire. So he built it following their advice and made it and its minaret a copy of Samarra’s mosque.”

The mosque was kept in its original state and most of the works carried out were mainly to restore the damage caused by fire or natural decay. Historical sources indicate that the mosque witnessed the following changes:

The Plan in brief

The mosque has a square shape 162 meters long, making it one of the largest mosques of Cairo (figure 1). It consists of three main sections. The prayer hall (Figure 2) is a rectangle of six aisles running parallel to the Qibla wall. These aisles are divided by five arcades of pointed arches, each one is carried on 16 piers of brick and covered with plaster. On the centre of the Qibla wall, there is the main Mihrab which is a niche of pointed arch flanked on both sides by two attached columns. Four other smaller Mihrabs which were added later appear on the sides of the main mihrab, two on each side.

The courtyard “Sahn” is a square extending south of the prayer hall. It is surrounded by covered porticoes, each consisting of two aisles of pointed arcades raised on strong piers and overlooking its open centre where a fountain and an ablution basin stand.
The third section consists of the extensions, of 11 meters each, along the northern, eastern and western sides of the mosque. These open extensions which ring the mosque on three sides work as buffers between the bustle of the streets and the religious space inside.

The mosque is accessed through a total number of 42 doors, half of which belong to the original mosque. The minaret in its famous spiral shape, in the form of Al-Malwiya of Samarra, was built outside the enclosure wall opposite the Qibla. 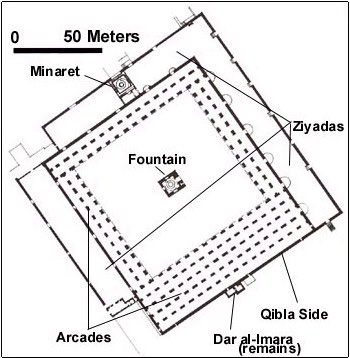 Figure 1. The Mosque plan in details

Mosque Architecture and its contribution

In addition to its historic importance, Ibn Tulun mosque is considered as one of the leading buildings to have a significant impact on the development of architecture beyond the Muslim boundaries. Its architectural richness exceeded the expectations of medieval architects, especially Europeans, henceforth becoming a show case for them to imitate and admire. The main architectural innovations of this mosque can be briefly summarised in the following: 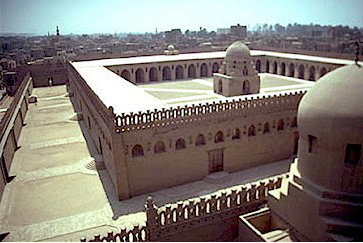 Decorative elements of the Mosque and its contribution

The internal decorative works are found mainly in the frames and crowns of the piers, arches and windows. These are in the form of a band consisting of series of curved lines, flower buds and diamond shapes. On the architrave of arcades and windows, is found a delicate combination of floral and geometrical patterns which show a great similarity to the one developed in Samarra. Such patterns were traced to Sassanian and Hellenic influences. According to Richmond they represent the earliest example of Arabesque, a pattern which became a prominent theme in most Muslim decorative art.

Calligraphy works took the form of decorative strips covering the wooden rail of higher sections of the walls. They also decorate the internal frames of windows and the area above the Mihrab.
The external walls of the Mosque were crowned with curious ornamental battlements in the form of a chain of little human figures (pigmies) defending the roof. Sources indicate that these provisions were also appreciated by Medieval European visitors, becoming later a prototype of Gothic pierced and crested parapets.

Ibn Tulun Mosque is a rare example where Europeans openly admitted its influence on the development of many features of their architecture. Elements such as the pointed arch, the pier, and wall battlements became the essential ingredients of Gothic architecture. This mosque should occupy a prime position in the list of historic and architectural achievements of Muslim civilisation. 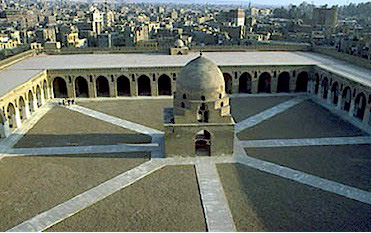 Figure 3. The systematic use of pointed arch clearly appears
in the arcades, windows, and doors.
Source: https://web.mit.edu/4.615/www/images/1018.html

1The oldest mosque of Egypt is the Mosque of Amru Ibn Al-Aas built in Fustat in 642.
2The Tulunids, formed a dynasty that lasted nearly forty years (868-905).
3Reference to one of the stories narrated by Al-Maqrizi who claimed that ibn Tulun was told that the mosque would require some 300 columns to carry the proposed roof span. Such a number would be difficult to collect and transport. Ibn Tulun postponed the construction work to search for an alternative solution. Al-Maqrizi added that one of the Emir’s prisoners, who happened to be a Christian, heard of the incident and came up with the pier idea. The Emir welcomed the suggestion and immediately freed the prisoner, offered him prizes and asked him to build the Mosque.
4Ibid. p.108.
5Although the use of an early version of the pier appeared in Ribat of Sussa (821), Jussaq Al-Khaqani in Samarra (836), then in Great Mosque of Sussa (850) and Abu Dulaf (Samarra 859/60), but in Ibn Tulun it became for the first time a coherent architectural unit of the architectural system of the mosque.