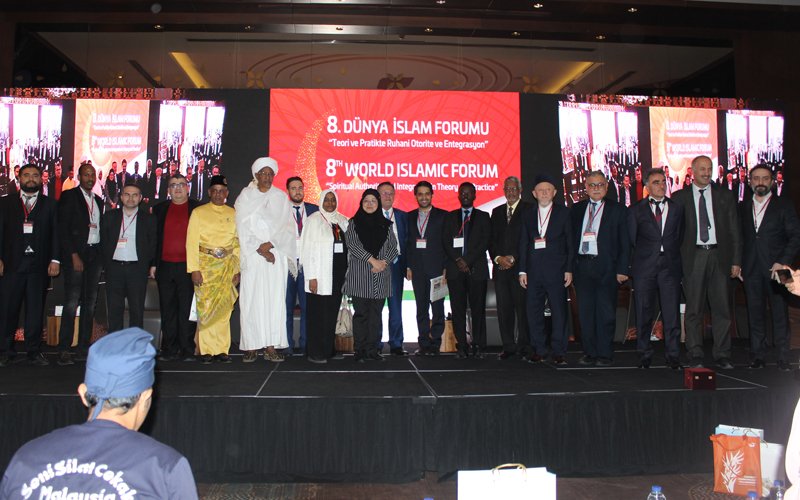 World Muslim Women Summit and Exhibition | WISE 2018 (with the theme of “One Woman – One World | Politics for Building Power and Justice”) took place in Istanbul during 1 – 2 March 2018. Alongside with it, two important events took place at the same venue:  The 8th Meeting of the World Islamic Forum  and the Ceremony of the third Islamic World Istanbul Awards.These conferences were under the auspices of the Think Tank organisation, TASAM, Turkey.

In this event, FSTC’s President, Professor Salim Al-Hassani delivered a keynote lecture on the “Early Women of Science, Technology, Medicine and Management.”The full text of the presentation can be found here. 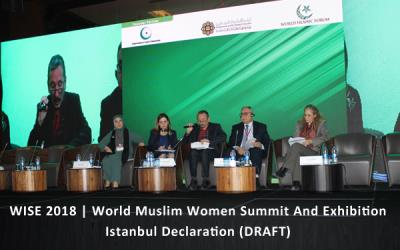 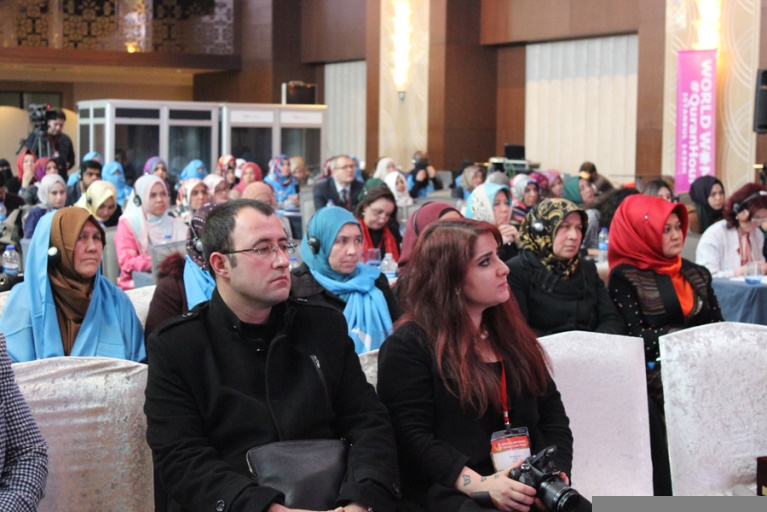 As part of the World Islamic Forum, an Award Ceremony of the third of Islamic World Istanbul was organised to recognise distinguished Muslim scholars and achievers.Professor Salim Al-Hassani was presented with ‘The Culture Award’. 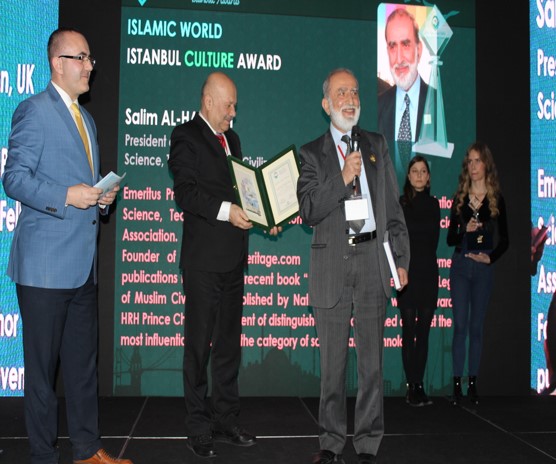 Despite the scarcity of references to the historical role women played in these fields, we endeavoured to unearth significant pieces from various literary genres to build the first synthesis on this important subject. Among the examples we present there are famous ones, such as those of Zubayda who pioneered a most ambitious project of digging wells and building service stations all along the pilgrimage route from Baghdad to Makkah; and also constructing a complex water system to bring water from aquifers to Makkah using underwater canals and aqueducts. Additional examples being that of Dhayfa Khatun who excelled in management and statesmanship alongside Fatima al-Fehri who founded the Qarawiyin mosque – school complex that became the oldest extant university in the world.There are other women of science who are much less known, such as Sutayta who was a mathematician and an expert witness in courts, Lubana of Cordoba whose expertise in mathematics was quoted in numerous historical sources, and the astrolabe maker Al-‘Ijliya (Al-Astrulabi).

From Bangladesh to Pakistan, Kyrgyzstan to Nigeria, Senegal to Turkey, it is not particularly rare in our own times for women in Muslim-majority countries to be appointed and elected to high offices—including heads of state. Nor has it ever been.Stretching back more than 14 centuries to the advent of Islam, women have held positions among many ruling elites, from malikas, or queens, to powerful advisors. Some ascended to rule in their own right; others rose as regents for incapacitated husbands or male successors yet too young for a throne. Some proved insightful administrators, courageous military commanders or both; others differed little from equally flawed male potentates who sowed the seeds of their own downfalls.This six-part series presents some of the most notable historical female leaders of Muslim dynasties, empires and caliphates:

Professor Salim Al-Hassani published in the issue 369 (Spring 2012, p. 10) of Runnymede Bulletin (Spring 2012 Runnymede Bulletin – Sport) a short article on “Sports in Muslim Heritage”. He argues, notably, that while Europe was in the “Dark Ages”, the Islamic world enjoyed a period of high art, science, and sport. During this long period, various forms of Riyadha (sport in Arabic) was widely practiced in the classical Islamic world, and this practice continues intensively in the present.

Fatima al-Fihri, a Muslim woman activist from the annals of history has been reintroduced to inspire future generations.”Last week I mentioned the one-day conference at the University of Derby on Muslim women activists and suggested that Muslim women activists were not a new phenomenon, that indeed Muslim women have been activists since the advent of Islam. At this same conference, a presentation on historical Muslim women activists was given by the Muslim Women’s Historical Heritage (Müslüman Kadının Tarihi Mirası) who are working in conjunction with the Foundation for Science, Technology and Civilization (FSTC) from Britain and the Turkish NGO, IGETEV.FSTC, an NGO which supports activities like the 1001 Muslim Inventions books and exhibitions, Muslim Heritage and Curriculum Enrichment for the Future (CE4tF), has been keen to bring these historical personages, who are missing from the typical curriculum, back into the history classroom and people’s consciousness. In Turkey the MWHH group is concentrating on women with Muslim heritage, they are bringing to light women from the distant past about whom little is known, in the hopes that people will be inspired to find out more. A further aim of this project is to give young people role models from their own culture to whom they can turn.” Zeynep Jane Louise Kandur 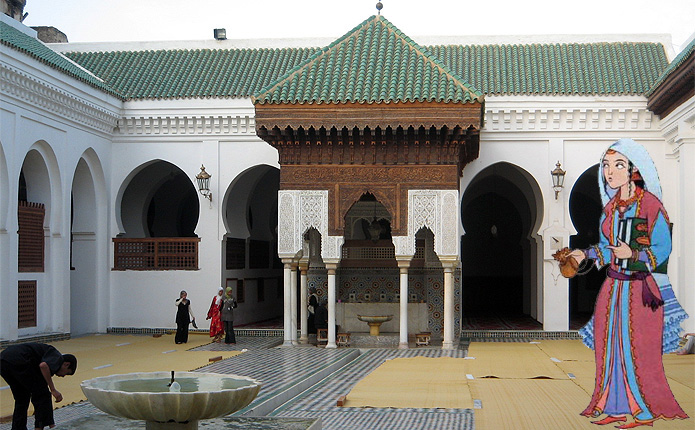 In the history of Islamic civilization, many hospitals were founded by women, either as wives, daughters or mothers of sultans. All health personnel were male at these hospitals. In the Ottoman period, the female patients were treated either at their homes or at the residences of the medical practitioners until the 19th century. This feature somewhat explains the rich varieties of females practicing medicine both in and outside the Ottoman palace. In this article, Professor Nil Sari, provides information on the various medical practices dedicated to female patients under the Ottomans.

The Foundation for Science Technology and Civilisation (FSTC), launched a new course in Istanbul, Turkey. Entitled “Women of Science Medicine and Management in Muslim Heritage”, the course was in collaboration with Insan Gelisimi Ve Toplumsal Egitim Vakfi (iGETEV). The course aimed to focus attention on women who excelled in science, medicine and management within the Muslim Heritage.

This is a review of the book prepared by Hilal Kazan for the Istanbul Greater City Council Cultural Foundation in order to provide a useful and important bio-bibliographic resource on the history of calligraphy of the Muslim Civilization. Written in Turkish and English, the book consists of notices of past and present Muslim female calligraphers, with many priceless examples of masterpieces of calligraphy. It emphasises also the importance of the activities of female calligraphers in the Muslim civilization at various places. The book reviewed in the following article is a unique work on the subject.

The English aristocrat and writer Lady Mary Wortley Montagu (1689-1762) is today remembered particularly for her letters from Turkey, an early example of a secular work by a Western woman about the Muslim Orient. When Lady Mary was in the Ottoman Empire, she discovered the local practice of variolation, the inoculation against smallpox. Unlike Jenner’s later vaccination, which used cowpox, variolation used a small measure of smallpox itself. Lady Mary, who had suffered from the disease, encouraged her own children to be inoculated while in Turkey. On her return to London, she enthusiastically promoted the procedure, but encountered a great deal of resistance. However, her example certainly popularized the practice of inoculation with smallpox in British high society. The numbers inoculated remained small, and medical effort throughout the 18th century was concentrated on reducing the risks and side-effects of the inoculation process.

International Women’s DayTo celebrate Women’s Day on 8th March, no way is better than reproducing a collection of articles written by FSTC scholars and associates on the achievements of women in Muslim Heritage in various fields. We focused in our work on this topic of contributions made by women in science, technology, medicine, social care, management and patronage. 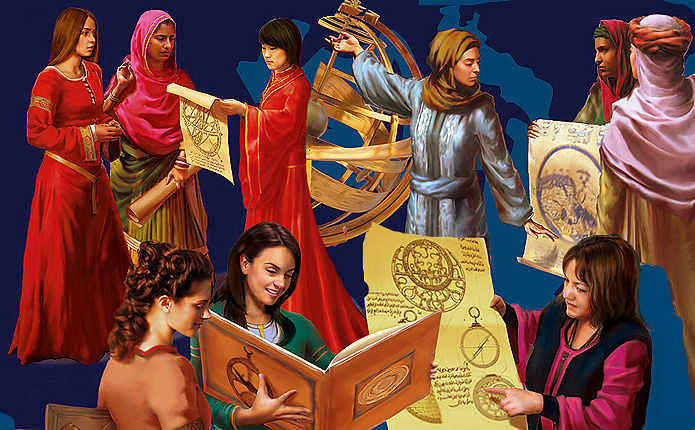