On 2 February 2009 Professor Salim Al-Hassani, Chairman of the FSTC was given homage by Sheikh Abdul Maqsood Khoja at the Al-Ithnainiya Literary Forum in Jeddah, Saudi Arabia. 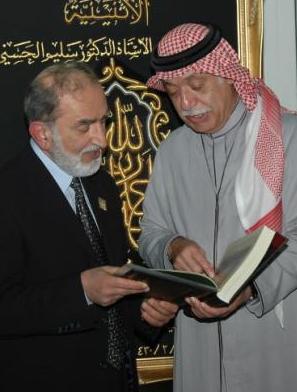 For more details visit the website of the Al-Ithnainiya Literary Forum: Homage to Professor Salim Al-Hassani (in Arabic).

The Ithnaineyah Forum in its meaning and content is a way of appreciation to some influential and original Arab innovators and to express deep recognition of their contribution to their nations and societies. The Forum values their enrichment of the intellectual, scientific and literary Arabic scene with their various endowments.

The work carried out by the Forum is described as follows by its founder, Sheikh Abdul Maqsood Khoja:

“In my endeavours to reflect the high value attributed by our society to those pioneers in literature, I launched the Ithnaineyah since 1982 as a weekly Forum that gathers intellectuals every Monday (Ithnain) evening at my house in Jeddah to express our appreciation as mentioned above.

The results of these meetings had piled through time a large number of video clips. A lot of friends noted that it will be valuable to make them available in text for those who want to read and trace the outcome of these various meetings that represent more or less in a way or another a kind of an Encyclopaedia, as so called by some interested readers. No doubt the idea was great, so I did my best to convert all the cassettes into books. Now I am really satisfied to bring forth for Arabic readers around the world through this site which can be considered as a first hand data source.

However, the building of the site will continue together with the issuance of new books in this series. Through this series of 18 books you can review our activities from the very beginning till now. I believe that this series give some assistance to researchers, students and concerned readers to study some of the main leading intellectuals during this period.

Of course we are in the process of inviting more of our outstanding innovators to have the honour of building bridges with them for the benefit of Arabic Literature”. (Source: The website of Al-Ithinainiya Literary Forum).