by The Editorial Team Published on: 26th February 2013

Muhammad ibn Muhammad ibn Hasan al-Tusi (born in 18 February 1201 in Tus, Khorasan – died on 26 June 1274 in Baghdad), better known as Nasir al-Din al-Tusi, was a Muslim Persian scholar and prolific writer in different fields of science and philosophy. He was an astronomer, mathematician, physicist, philosopher, and theologian. 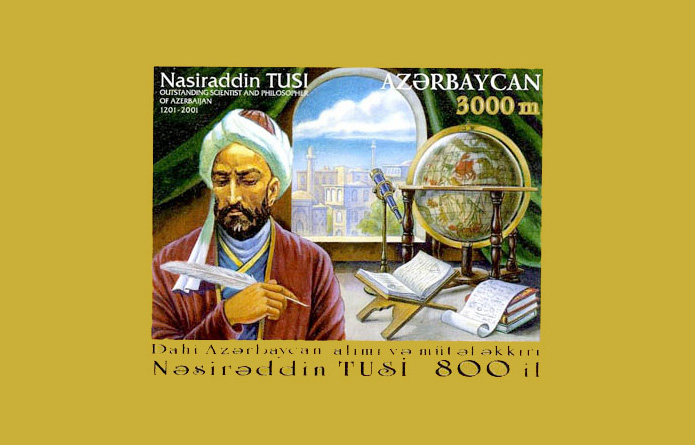 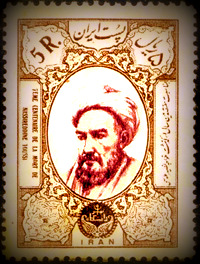 Muhammad ibn Muhammad ibn Hasan al-Tūsī (born in 18 February 1201 in Tūs, Khorasan – died on 26 June 1274 in Baghdad), better known as Nasīr al-Dīn al-Tūsī, was a Muslim Persian scholar and prolific writer in different fields of science and philosophy. He was an astronomer, mathematician, physicist, philosopher, and theologian.

Al-Tūsī wrote over 150 works, in Arabic and Persian, that dealt with mathematical sciences, philosophy, and the religious sciences (fiqh, kalām, and Sufism). By his prolific oeuvre, the wide diffusion of his works and their influence, he acquired the honorific titles of khwāja (distinguished scholar and teacher), ustādh al-bashar (teacher of mankind), and al-mu’allim al-thālith (the third teacher, after Aristotle and Al-Fārābī). In addition, Al-Tūsī was the director of the Islamic major astronomical observatory of Marāgha (northern Iran).

Al-Tūsī was born into a family of learned scholars. His father and his uncles encouraged him to pursue the Islamic religious sciences as well as the the rational sciences. He studied philosophy and mathematics in his native town Tūs, but eventually traveled to Nīshāpūr (after 1213) in order to continue his education in sciences, medicine, and philosophy. He studied the works of Ibn Sīnā, who became an important formative influence. Al-Tūsī then traveled to Iraq where his studies included legal theory; in Mosul (sometime between 1223 and 1232), one of his teachers was Kamāl al-Dīn ibn Yūnus (died 1242), a legal scholar who was also renowned for his expertise in astronomy and mathematics.

In the early 1230s, after completing his education, Tūsī found patrons at the Ismā’īlī courts in eastern Iran. He eventually relocated to Alamūt, the Ismā’īlī capital, and witnessed its fall to the Mongols in 1256. Al-Tūsī then served under the Mongols as an advisor to their leader Hūlāgū, becoming court astrologer as well as minister of religious endowments (awqāf). In his new position, Al-Tūsī convinced Hūlāgū to found an astronomical observatory and he oversaw the construction of this major scientific institution and its instruments in Marāgha, the Mongol headquarters in Azerbaijan, and he became its first director until his death in 1274. The Marāgha Observatory also comprised a library and school. It was one of the most ambitious scientific institutions established up to that time and may be considered the first full-scale observatory. It attracted many famous and talented scientists and students from the Islamic world and even from as far away as China. The observatory lasted only about 50 years. However, even after its activity stopped, the scientific legacy of Maragha observatory had repercussions from China to Europe for centuries to come. Indeed, it is said that Ulugh Beg’s childhood memory of visiting the remnants of the Marāgha Observatory as a youth contributed to his decision to build the Samarqand Observatory. Mughal observatories in India, such as those built by Jai Singh in the 18th century, clearly show the influence of these earlier observatories, and it has been suggested that Tycho Brahe in late 16th century Europe might have been influenced by them as well. In 1274 Tūsī left Marāgha with a group of his students for Baghdad, where he died soon after.

Al-Tūsī’s writings are both synthetic and original. His recensions (tahārīr) of Greek and early Islamic scientific works, which included his original commentaries, became the standard in a variety of disciplines. These works included Euclid’s Elements, Ptolemy’s Almagest, and the so called mutawassitāt (the “Intermediate Books” that were to be studied between Euclid’s Elements and Ptolemy’s Almagest) with treatises by Euclid, Theodosius, Hypsicles, Autolycus, Aristarchus, Archimedes, Menelaus, Thābit ibn Qurra, and the Banū Mūsā. In mathematics, Al-Tūsī published a sophisticated “proof” of Euclid’s parallels postulate that was important for the development of non-Euclidian geometry, and he treated trigonometry as a discipline independent of astronomy, which was in many ways similar to what was accomplished later in Europe by Johann Müller (Regiomontanus). Other important and influential works include books on logic, ethics, and a famous commentary on a philosophical work of Ibn Sīnā.

Nasīr al-Dīn al-Tūsī’s major scientific writings in astronomy, including Al-Tadhkira fī ‘ilm al-hay’a, in which he endeavoured to reform Ptolemaic astronomy, had an enormous influence upon late medieval Islamic astronomy as well as the work of early-modern European astronomers, including Copernicus.

Al-Tūsī wrote several treatises on practical astronomy (taqwīm), instruments, astrology, and cosmography/theoretical astronomy (‘ilm al-hay’a). He also compiled a major astronomical handbook (in Persian) entitled Zīj-i Īlkhānī for his Mongol patrons in Marāgha. Virtually all these works were the subject of commentaries and supercommentaries, and many of his Persian works were translated into Arabic. They were influential for later generations, some still being used into the 20th century.

In planetary theory, Al-Tūsī sought to reform the Ptolemaic system by correcting its inconsistencies, in particular its violations of the fundamental principle of uniform circular motion for heavenly bodies. For this purpose, he especially set forth an astronomical device (known among the historians as the Tūsī-couple) that consisted of two circles, the smaller of which was, internally, tangent to the other that was twice as large. The smaller rotated twice as fast as the larger and in the opposite direction. Wit this device, Al-Tūsī proved that a given point on the smaller sphere would oscillate along a straight line. By incorporating this device into his lunar and planetary models, Al-Tūsī reproduced Ptolemaic accuracy while preserving uniform circular motion, a condition reconciling astronomy with the prevalent natural philosophy. A second version of this device could produce (approximately) oscillation on a great circle arc, allowing Al-Tūsī to deal with irregularities in Ptolemy’s latitude theories and lunar model.

Al-Tūsī disclosed these models in several of his works, mainly in his famous Arabic treatise Al-Tadhkira fī ‘ilm al-hay’a (Memoir on astronomy). His models were of major significance in the history of astronomy. First, they produced models that adhered to both physical and mathematical requirements; the two versions of the Tūsī couple, from the perspective of mathematical astronomy, allowed for a separation of the effect of distance of the planet from its speed (which had been tied together in the Ptolemaic models). Al-Tūsī was thus able, for example, to circumvent Ptolemy’s reliance on a circular motion to produce a rectilinear, latitudinal effect. Second, these new models were greatly instrumental for Al-Tusi’s successors in Islamic astronomy, such as his student Qutb al-Dīn al-Shīrāzī and Ibn al-Shātir (14th century) as well as the work of early-modern European astronomers such as Copernicus. Their influence crossed the borders of astronomy written in Arabic or Persian and they are found in Sanskrit and Byzantine texts.

Al-Tūsī also influenced his astronomical and cosmological successors with his discussion of the Earth’s motion. Although he remained committed to a geocentric universe, Al-Tūsī criticized Ptolemy’s reliance on observational proofs to demonstrate the Earth’s stasis, noting that such proofs were not decisive. Recent research has revealed a striking similarity between Al-Tūsī’s arguments and those of Copernicus.

Editorial Board, The: Video Stream of George Saliba’s Lecture.

FSTC Research Team: A New Book by George Saliba: Islamic Science and the Making of the European Renaissance.

Rosenfeld, B. A. and Ekmeleddin Ihsanoglu (2003). Mathematicians, Astronomers, and Other Scholars of Islamic Civilization and Their Works (7th–19th c.). Istanbul: IRCICA, pp. 211–219.

Saliba, G. (2000). “Whose Science is Arabic Science in Renaissance Europe?” Online at: here and here.

Saliba, G. (2000). “Objections to Greek Astronomy in Islamic Times and their Relationship to the Work of Copernicus.” History of Physics Newsletter vol. 3-n°1: pp. 7-8.

Saliba, G. (2007). Islamic Science and the Making of the European Renaissance. Cambridge, Mass.: MIT Press, Series “Transformations: Studies in the History of Science and Technology”. See a review of the book at: here.