Ulugh Beg was a Timurid ruler as well as an astronomer, mathematician. His primary interest was in the sciences and intellectual matters. He built an observatory at Samarkand. In his observations he discovered a number of errors in the computations of the 2nd-century Alexandrian astronomer Ptolemy. Ulugh Beg was also notable for his work in astronomy-related mathematics, such as trigonometry and spherical geometry. He built the great Ulugh Beg Observatory in Samarkand, which was considered by scholars to have been one of the finest observatories in the Islamic world at the time and the largest in Central Asia. 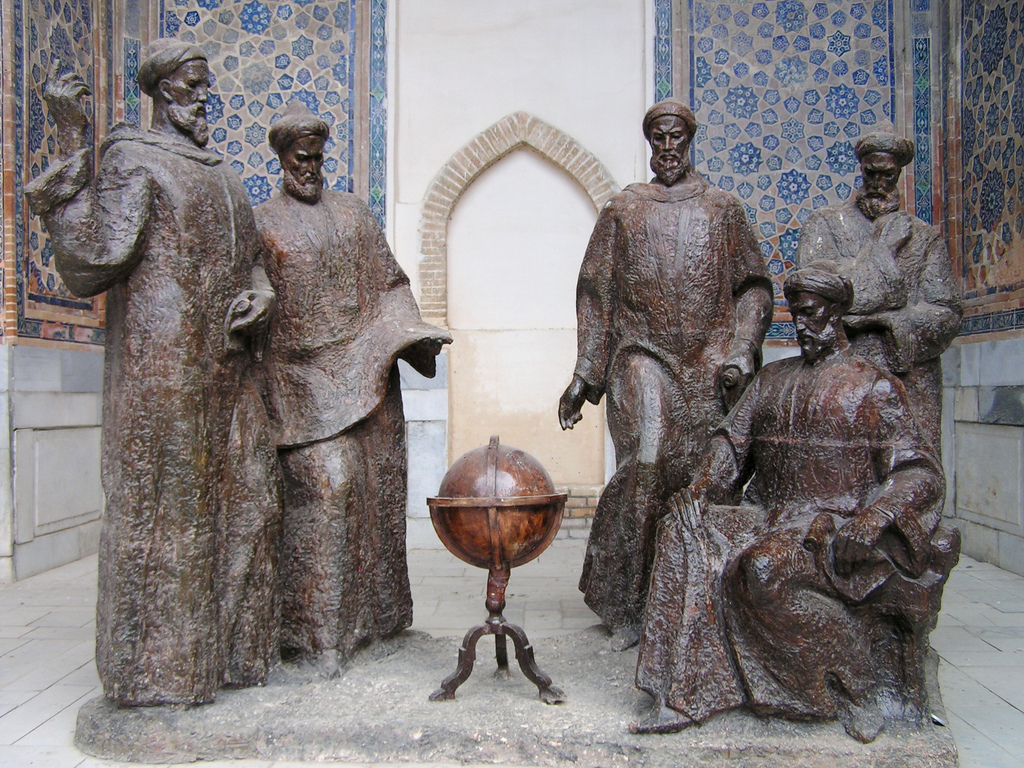 Died near Samarqand (Uzbekistan) on 27 October 1449

Muhammad Taraghāy ibn Shāhrukh ibn Tīmūr better known as Ulugh Beg (Sultāniyya (Iran) on 22 March 1394 and died near Samarqand (Uzbekistan) on 27 October 1449) was a Timurid ruler as well as an astronomer, mathematician. Ulūgh Beg was the grandson of the Asian conqueror Timur (Tamerlane). His primary interest was in the sciences and intellectual matters. Under his brief rule the Timurid dynasty reached its cultural peak. His father, Shāh Rokh, captured the city of Samarkand and gave it to Ulūgh Beg, who made it a centre of Muslim culture. There he wrote poetry and history and studied the Qur?ān. His greatest interest was astronomy, and he built an observatory (begun in 1428) at Samarkand. In his observations he discovered a number of errors in the computations of the 2nd-century Alexandrian astronomer Ptolemy, whose figures were still being used.

Ulugh Beg was also notable for his work in astronomy-related mathematics, such as trigonometry and spherical geometry. He built the great Ulugh Beg Observatory in Samarkand, which was considered by scholars to have been one of the finest observatories in the Islamic world at the time and the largest in Central Asia. He also build the Ulugh Beg Madrasah (1417–1420) in Samarkand and Bukhara, transforming the cities into cultural center of learning in Central Asia.

In a long and detailed article on Astronomical Observatories in the Classical Islamic Culture, FSTC Research Team devoted a section to The Legacy of Ulugh Beg that we reproduce to celebrate the anniversary of this great scholar.

In a noteworthy article by Kevin Krisciunas (University of Notre Dame, Department of Physics) on The Legacy of Ulugh Beg, the author presents an outline on the subject of Muslim observatories and especially the work performed in Samarqand observatory [1].

Krisciunas reminds us that Ulugh Beg is to be remembered not for his princely role, but for his role as patron of astronomy, an astronomer and observatory builder. His distinction was that he was one of the first to advocate and build permanently mounted astronomical instruments. The importance of his observatory is further enhanced by the large number of astronomers, between sixty and seventy, involved in observation and seminars. Of crucial importance, too, is that observations were carried on a systematic basis forlengthy periods of time, as from 1420 to 1437. The reason, as Krisciunas makes clear, why observations are not completed in one year but instead require ten or fifteen years, is:

“The situation is such that there are certain conditions suited to the determination of matters pertaining to the planets, and it is necessary to observe them when these conditions obtain. It is necessary, e.g., to have two eclipses in both of which the eclipsed parts are equal and to the same side, and both these eclipses have to take place near the same node. Likewise, another pair of eclipses conforming to other specifications is needed, and still other cases of a similar nature are required. It is necessary to observe Mercury at a time when it is at its maximum morning elongation and once at its maximum evening elongation, with the addition of certain other conditions, and a similar situation exists for the other planets.

“Now, all these circumstances do not obtain within a single year, so that observations cannot be made in one year. I is necessary to wait until the required circumstances obtain and then if there is cloud at the awaited time, the opportunity will be lost and gone for another year or two until the like of it occurs once more. In this manner, there is a need for ten or fifteen years. One might add that because it takes Saturn 29 years to return to the same position amongst the stars (that being its period of revolution about the Sun), a period of 29 years might have been the projected length of the Samarkand programme of observations.”

In his article, Krisciunas, although recognising the crucial role of Islamic observation, still finds sources of disagreement with the notion that the Samarqand observatory exerted decisive influence on Europe. Actually, the legacy of this scientific institution was indeed not transmitted to the West, where a thriving scientific tradition was being developed as a result of earlier contacts with Arabic science. It remains true, however, that the work of Ulugh Beg and his colleagues had an important impact on another Islamic team of scholars, those who worked in Istanbul in late 16th century under the leadership of Taqi al-Din ibn Ma’ruf. Now, the similarity of Taqi al-Din’s astronomical instruments with those of Tycho Brahe is amazing, and should stand as a strong evidence that the Danish astronomer certainly knew in a way or another of the achievements of his Muslim colleagues, at least in the field of astronomical instrumentation [2]. 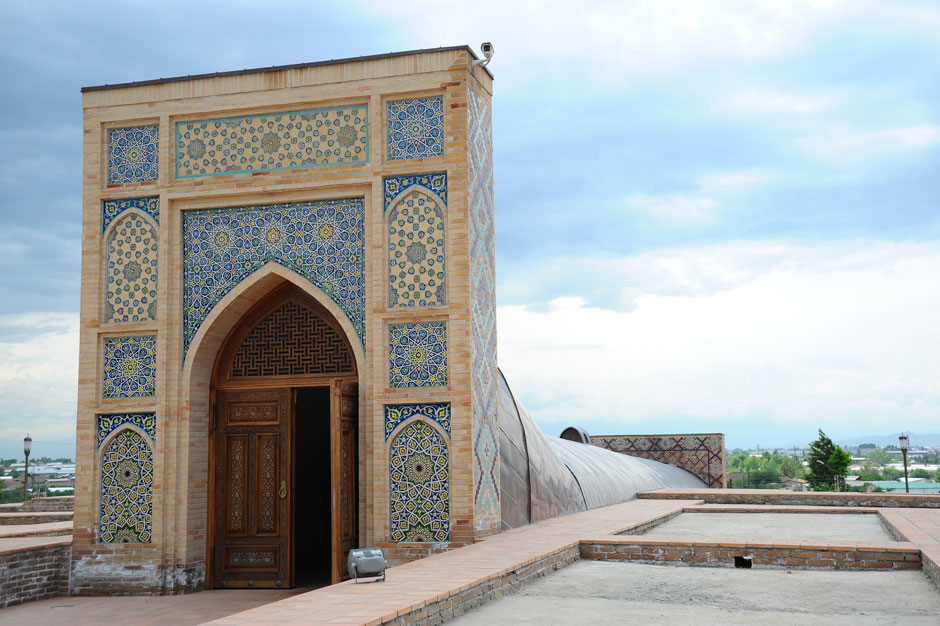 “The Samarkand observatory consisted of a monumental cylindrical building of a height of 30 meters and a diameter of 46, with a huge marble sextant, the “Sextant of Fakhri”, of a radius of about 40 meters, allowing a very high precision in the astronomical measurements during the passage of the Sun, the Moon or the planets along the meridian. This arch of 60° included staircases on each side to allow the assistants carrying out the measurements to move.” (Source)

[1] Kevin Krisciunas, “The Legacy of Ulugh Beg”, Bulletin of the Association for the Advancement of Central Asian Research, vol. 5, no. 1, Spring 1992, pp. 3-6. Reprinted in in Central Asian Monuments, edited by Hasan B. Paksoy, Istanbul: Isis Press, 1992, pp. 95-103 (for an online version click here). See also by the same author: “The accuracy of the measurements in Ulugh Beg’s star catalogue”, Bulletin of the American Astronomical Society, vol. 24, no. 4, 1992, 1166-7; “A more complete analysis of the errors in Ulugh Beg’s star catalogue”, Journal for the History of Astronomy, vol. 24, November 1993, pp. 269-280; and “Observatories”, Encyclopedia of Astronomy and Astrophysics, Institute of Physics Publishing, 1999 (available on The astrophysics preprint server: arXiv:astro-ph/9902030.

[2] This issue is studied by Sevim Tekeli, The Instruments of Istanbul Observatory (published on www.MuslimHeritage.com, 8 June 2008). See also Aydin Sayili, Observatories In Islam and Salim Aydüz, Ottoman Contributions to Science and Technology: Examples from Geography and Astronomy.

What Islam Did For Us

President of FSTC at AINAC in Abu Dhabi

Representing Islam and Muslims in the Media: An Academic Debate