The article analyses the mathematical contents of four texts by Nasir al-Din al-Tusi (1201-1274), one of the most original and prolific scientists of the classical Islamic tradition. These four texts on mathematics are: Al-Tusi's Tahrir (Exposition) of Euclid's Elements, the text Shakl al-Qatta', The Risala al-Shafiya in which Al-Tusi made a substantial contribution to solve the classical problem of parallel lines, and finally the treatise of artithmetic Jami' al-hisab. 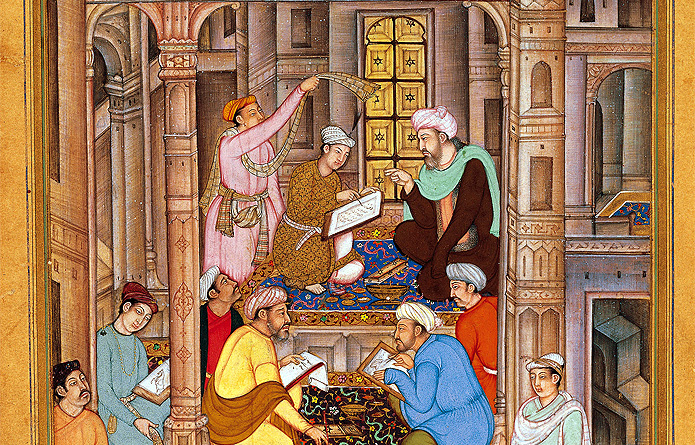 by A. Babayev and V. F. Medzlumbeyova*

4. The treatise of arithmetic Jami’ al-hisab

This work was supported by the Science Development Foundation, The President of the Republic of Azerbaijan-Grant, EIF-2011-1(3)-82/19/1.

The bibliographic work of G.P. Matvievskaya and B.A. Rosenfeld[1] contains the titles and storage locations of 29 manuscripts of Nasir al-Din Abu Jafar Muhammad ibn Hasan Abu Bakr al-Tusi (1201-1274: see more on his life and work in Nasir al-Din al-Tusi): 4 on mathematics, 22 on astronomy, as well as 4 in physics, 5 in logic and philosophy, and one manuscript in economics, music, mineralogy, and poetry. We will focus hereafter on the four mathematical works of Al-Tusi.

In the fifties of the last century, Azerbaijani researchers H. Zarinazade and G. Mammadbeyli translated the second version of the Exposition into Azerbaijani language, but for various reasons they did not finish the work of editing and publishing. Finally, in 2001, this work has been completed by A. Guliyev, E. Babaev and A. Babaev.[2]

The style of Al-Tusi’s Tahrir of Euclid’s Elements is characterized by citing the text of Euclid and producing comments on them, starting with the words: “I’m talking about.” In this process, Al-Tusi gives different proofs of the theorems than those produced by in the the Euclidean text.

The study of Al-Tusi’s comments, in terms of geometric concepts, terminology and demonstrations of theorems leads us to the conclusion that, at the time of writing the Tahrir, the nature and conception of of geometry has changed.

This is indicated by the following postulates, which Al-Tusi formulates before the Euclidean ones:

1. “Point, line, plane and surface by the most important way exist, and a circle exists.”

4. “No matter how the point is, we can assume the line passing through this point.”

5. “Any point, line segment and a planar surface on the applicability of its similarity.”

1. “Through a straight line can be drawn a plane.”

2. “Through a straight line and a point lying outside of it can be drawn (only one) plane.”

3. “Two straight lines do not include space.”

As it is known, up to the 15th century, the number “one” (the unit) was not considered as a number, because it was presented as a quantitative expression of the monad, and the number was defined aa a set of units (in the Greek tradition). Numerical characteristic of the units are not detected. In his commentary on the VIIth book of the Elements, Al-Tusi wrote:

“I say, the number is called something that takes place in a row of account. By this definition, the “unit” should be a number.”[4]

So, the property of the numbers (starting with one) is to be in the row of the account (i.e., to be a characteristic of factoring in one-to-one correspondence).

The work of Nasir al-Din al-Tusi Treatise on the Complete Quadrilateral (Shakl al-Qatta’)[5] is in essence the first mathematical work on trigonometry as a distinct science. Until Al-Tusi, trigonometry was considered as part of astronomy. In this treatise, Al-Tusi introduced the concept of the polar triangle and gives the calculations for it. In addition, he developed the theory of ratios of Eudoxus for incommensurable quantities and introduced the numerical characteristic of one ratio (the “measure” of ratio).

This treatise was known to European scholars, particularly to Regiomontanus (15th century), and in 1952 it was translated into Russian by G.D. Mammadbeyli and B.A.Rozenfeld.

V.N. Molodshy,[6]referring to the Shakl al-Qatta’, wrote: “In the 13th century, Azerbaijani astronomer and mathematician Nasir al-Din al-Tusi defined the concept of a positive real number, just like Newton (i.e., Al-Tusi defined that 400 years before Newton).” We must recall that the number in Newton’s definition is the relation of one quantity to another of the same kind, taken as a unit.

The new in Al-Tusi’s discovery in this work is that we could trace how he developed the notion of “measure” of ratio, what led him to the extension of the notion of rational number.

The development of the theme of parallel lines was ongoing for two thousand years. The theory of parallels was substantially advanced in the works of the 9th-14th-centuries scholars of the Islamic world. Al-Tusi’s treatise on parallels is called Al-Risala al-shafiya ‘an al-shak fi al-khutut mutawaziyya (Treatise healing the doubt about the parallel lines). This is a very known work of Al-Tusi. The new in the investigation of this treatise is the possibility to study the Tusi view on axioms and postulates, because this logical problem was reduced to the question of “Y Postulate”. The translation into Russian of the treatise, carried by B. A. Rosenfeld and A. P. Yushkevich, was published in The Historico-Mathematical Investigation.”[7]

In this treatise, in addition to his theory of parallel, Al-Tusi produced also some of the results of ‘Umar al-Khayyam, Al-Hassan ibn al-Haytham and others.

4. The treatise of arithmetic Jami’ al-hisab

The treatise of Nasir al-Din al-Tusi The Collection of Arithmetic (Jami’ al-hisab bi-‘l-Takht wa-‘l-turab) was written in 1265. A fragment of this treatise (the 11th section of the first part) was translated into Russian in the 1960’s by S. A. Akhmedov and B. A. Rosenfeld.[8] The treatise was translated in full into Azerbaijani by scholars of the National Academy of Sciences of Azerbaijan A. Amirahmedov, E. Mamedov and A.Babayev (the author of this paper), from Tashkent and St. Petersburg manuscripts, and was published in 2008.[9]

Then the treatise was translated into Russian and completed with Azerbaijani translation, but verified against  the Arabic original by the scientific workers of the Institute of Mathematics and Mechanics of the National Academy of Sciences of Azerbaijan A. A. Babaev, E. M. Mamedov, and V. F. Medzhlumbekova.[10]

Let us explain, first of all, the name of the treatise. In the East, a board covered with dust was used, from antiquity to the Middle Ages, as a means of calculation. On this board, with the pointy sticks (as a handle) arithmetic operations are recorded. Intermediate results were erased and replaced by others, so as to define the algorithmic character of the arithmetic operations. Thus a set of algorithms turned the board into a kind of computing device. Thus the Collection text was an excellent textbook lacking of methodological omissions.

In the study of the treatise we found marvelous facts, previously unknown and changing the dating of some mathematical statements. Thus, in the 8th section, Part 1, Al-Tusi puts the table to denote the degrees (Table 1). In this table the letter designations of degrees are given. We compared this table with the table of Chapter 11 of John Wallis’ The Historical and Practical Treatise on Algebra (Table 2).[11]

In Table 1 r, l, b are the last letters of the Arabic words judhur (root), mal (square), ka’b (cube) respectively. Outred’s letters q, c are the first letters of words Quadratum, Cubus (square and cube). The designation A is not correlated with any word. 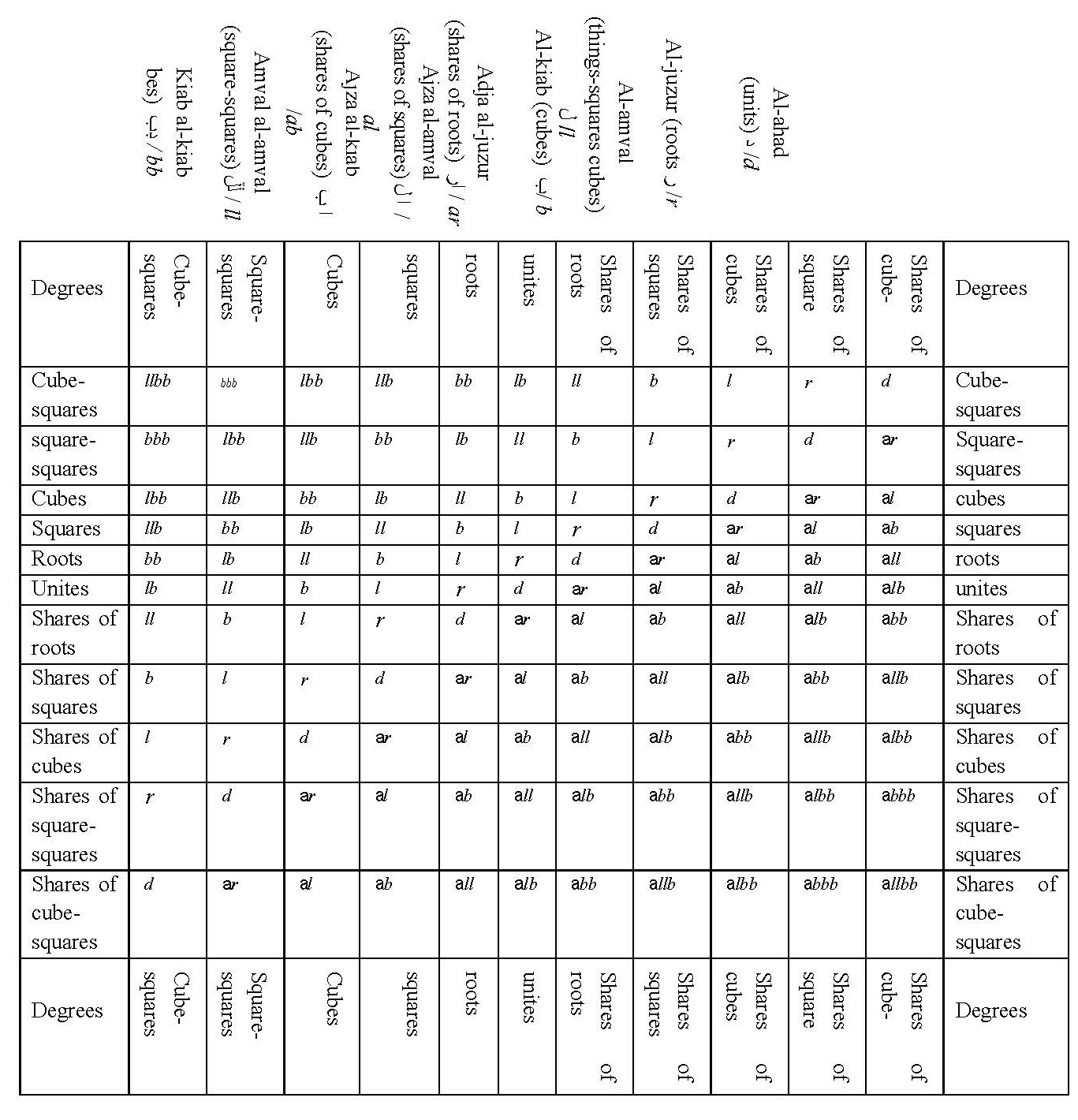 Table 2: The table from Wallis work 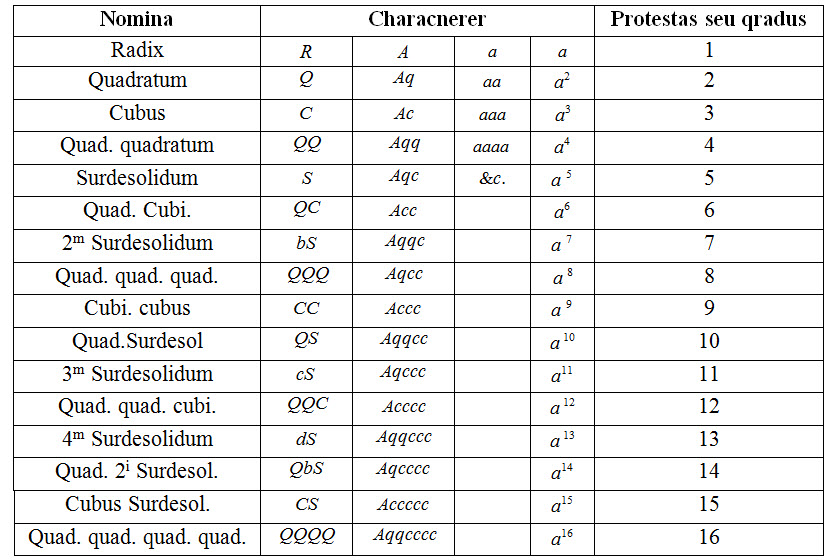 Taking into consideration the fact that the Arabic words are written from right to left, the principle of designation of Al-Tusi and Outred are the same. In the Tusi’s table there are the designations of “negative” power – the sheaves of degrees.

Note that it is not known any use of such symbols, not only by the predecessors of Al-Tusi, but also by Arab mathematicians of the later period. For example, there is nothing like it in the famous work The Key to Arithmetic” of Al-Kashi, who lived two centuries later.

Table 3: The table of the comparison (Tusi-Outred) 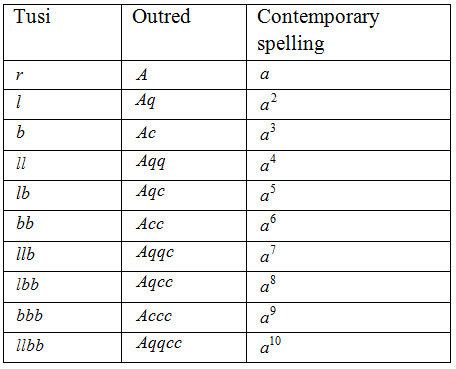 Another impressive fact is Al-Tusi’s remark about the “criterion” in the first part of the 12th chapter of his treatise. Here we present a validation of the results of arithmetic operations with the help of this “criterion.” The method of “criterions” involves comparing the remainders, obtained by dividing by 9, 7, 11, etc. of the result of operation on digits of terms of arithmetic action and of number of the resulting of arithmetic operation. These remainders are called “criterions”. In the case of the division by 9 (“criterion” on 9) this operation on digits is the summation of the digits of the number. This method was known to the Greeks and to the Indians.

It was thought that the coincidence of those “criterions” of the initial numbers and of the result is the necessary and sufficient condition for conviction in the correctness of the calculation. This is indicated in the works of such great medieval mathematicians as Abu ‘l-Hasan ibn Ahmad al-Nasawi (10th century)[12] and Ahmad ibn al-Banna (13th-14th centuries).[13] However, this condition is necessary, but not sufficient. In the history of mathematics the first indication of insufficiency of that condition dates back to the 15th century.

In the twelfth chapter of the Collection, Nasir al-Din al-Tusi wrote:

Thus, the assertion that the condition of coincidence of criterions is insufficient appeared in the 11th century.[14]

In the 3rd section, there is a table compiled for the binomial coefficients and algorithm to determine them. Although it is believed that the author of the table of the binomial coefficients (triangle of Pascal) was a famous French mathematician and physicist Blaise Pascal (1623-1662). In support of this, we give a quote from the Encyclopædia of Mathematics published in 1998 in Moscow: “to calculate the binomial coefficients, Pascal developed a method (“Pascal’s triangle”).[16] However, such table is found in the work of al-Samaw’al (12th century).[17]

The scientific work of Al-Tusi is an invaluable source for the study of mathematical thought in the Eastern Middle Ages and for rethinking of many mathematical ideas. The works of Al-Tusi as well as those of his great predecessors – Ibn Sina, al-Khwarizmi, ‘Umar al-Khayyam, etc. – refute the perception among some researchers that the mathematics of the Eastern Middle Ages was purely practical, and that there was a regression in mathematical theoretical thought in comparison with the Ancient period.

[1] G. P. Matviyevskaya, B. A. Rosenfeld, Mathematicians and Astronomers of Medieval Islam and their Works (VIII-XVII centuries), vol. 2, Moscow 1983.

[3] S. A. Yanovski, “About the Axioms”, Historico-Mathematical Investigations. Moscow, No XIII, 1959.

[5] Al-Tusi, The Treatise on the complete quadrilateral (Shyaklul Gita). Baku 1952. See also the reprint of this text in A Collection of mathematical and astronomical Treatises as revised by Nasiraddin al-Tusi, Frankfurt: Institute for the History of Arabic-Islamic Science, 1998, pp. 363-434.

[6] V. N. Molodshy, Foundations of the number’s doctrine in the XVIII and early XIX century. Moscow 1963.

[8] Al-Tusi, “Collection of arithmetic with the help of the board and the dust, 1st part,” Historico-mathematical investigations, Moscow 1999.

[11] T. A. Tokareva, “On the John Wallis historical and practical treatise on algebra”, Historical-mathematical investigations, No. XXVII, Moskow 1983.

[15] Omar Khayyam, “On the evidence of problems of algebra and almukabaly,” Historical-mathematical investigations, No. 6, Moscow 1953.

[17] B. A. Rosenfeld, “Algebraic treatise of al-Samaw’al,” Historical-mathematical investigations, No XX, 1975.

*Institute Mathematics and Mechanics of the National Academy of Sciences of Azerbaijan.