by The Editorial Team Published on: 1st September 2009 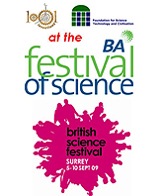 The British Science Festival is one of Europe’s largest science festivals, taking place each September. The Festival is in a different location in the UK each year, bringing to the public the latest in science, technology and engineering.

This year, the British Science Festival will be hosted by the University of Surrey from 5- 10 September 2009 with events taking place in Guildford and various venues across Surrey. The week long programme of events features debates, workshops, talks, plays, films, excursions and field trips, hands-on activities and more. There’ll be something for everyone from families and schoolchildren to practising scientists and local businesses.

Among the activities organised during the Festival, three sessions were dedicated to debates centred on the scientific and technological legacy of the Islamic civilisation and its impact on our world. These sessions are organised by the Foundation for Science, Technology and Civilisation (FSTC) and will be animated by key members and associates among the experts and specialists working with the Foundation.

The three sessions are:

Copernicus and the Astronomy of Medieval Islam

Event summary:
One of the most important and famous revolutions in the history of science was Copernicus’ confirmation of the heliocentric model of our solar system. Join Jim Al-Khalili and guest speakers to find out how Copernicus would not have achieved what he did without knowledge of the work of much earlier Islamic scholars as is evident in his writing and diagrams.
Audience level: For all adults
Event Category: History, heritage and religion
Keyword:History of science, Muslim Heritage.
Venue: LT L, University of Surrey

07/09/2009
10:00 – 10:05 Welcome and overview of the session by Professor Jim Al-Khalili OBE – University of Surrey and Vice President of British Science Association

One fascinating, yet neglected, area of science is that of its cultural roots. This important aspect of science impinges on all areas of social cohesion, cultural convergence, even World peace. After reviewing the gap in Science taught in schools, this talk will describe some of the virtual 3D reconstructions of many complex medieval machines from Arabic manuscripts.

Arabs started their contribution to astronomy by making it a science in its own right. Having inherited astronomy and astrology as one product from the Greek they made a clear distinction between the two. They rejected any astronomical model that did not match observations; they utilised Math and applied it skilfully in astronomy and developed and introduced sophisticated observational instruments

Copernicus is often hailed as the father of modern astronomy. But long before the telescopes, Islamic scholars, virtually unknown in the west, made huge advances using incredibly accurate measurement and rigorous mathematics. This talk will describe how a different version of history has recently been uncovered during the making of the BBC4 series “Science and Islam”.

Standing on the Shoulders of Giants: Celebrating Muslim Heritage in our World

To be held at LT D (Griffiths), University of Surrey.
The session is organised by The Foundation for Science, Technology and Civilisation and 1001 Inventions Ltd. on 8 September 2009 (start time: 13:30 – end time: 15:30); sponsored by ASE and QCA.

Event Summary:
After the Roman Empire, there was an extraordinary blossoming of scientific activity radiating from Baghdad and along a glittering crescent through North Africa, Spain and into Southern Italy for about a thousand years after 600 CE. Join us to showcase some of the fascinating innovations of this period and explore their relevance in today’s world.
Audience level: For All adults
Event Category: History, heritage and religion
Keyword: Culture, History, Curriculum Enrichment, Engagement
Venue: LT D (Griffiths), University of Surrey

A golden age of civilization, from 600 and 1600 CE, will unfold, as you discover medieval Muslims who were trailblazers in fields as diverse as medicine and mechanics, cartography and chemistry, education and engineering, architecture and astronomy. No area was too obscure to miss the scrutiny of enquiry backed up by rigid scientific experimentation.

The ASE has been working with FSTC with support from QCA to develop, trial and evaluate teaching materials to help teachers with this new part of the Programme of Study. The project aims to enrich the KS3 curriculum and to inspire, challenge, include and support all learners aged KS3 through the production of innovative exemplar materials relevant to science and history.

Prepare to embark on a voyage of discovery through a thousand years of science and technology and get a glimpse into the lives of the medieval pioneers whose ingenious inventions have helped create our world today.

They say seeing is believing. We rely on Optics everyday. Virtually unknown physicists Al-Kindi, Ibn al-Haytham, and Kamalu-Din Al-Farisi have played crucial roles in developing this science. All three have paved the way to modern Optics by laying a solid foundation of clear physical picture supported with a mathematical rigour that astonishes even today.

Event Summary:
A fun, facilitated family workshop. Join us to create artistic replicas based on past inventions. Also see a mini exhibition, giving you a fascinating insight into the not-so Dark Ages… Come and light up a page in history.
Audience level: Families (with children aged 12 & under)
Event Category: History, heritage and religion
Keyword: Science
Venue: LT A, University of Surrey

Themes of the festival:

Announcement of FSTC activities in The British Science Festival 2009 on the website of 1001 Inventions.