The famous scientist Ibn al-Haytham (‘Alhazen') has rightly been credited with many advances in optics and vision science, but recent spurious claims that he is the ‘founder of psychophysics' rest upon unsupported assertions, a conflation of psychophysics with the wider discipline of psychology, and semantic arguments over what it is to ‘found' a school of thought.

This article was first published in Perception vol. 37(4), 2008: pp. 636 – 638 (electronic version: Abstract and Full-text PDF ). We are grateful to the author Dr. Craig Aaen-Stockdale for accepting that we republish it and to Pion Ltd, London, the publisher of Perception, for granting us permission to reproduce it on our web portal.

Ibn al-Haytham or ‘Alhazen’ (965-1039 CE) outlined many of the principles of optics and visual perception, anticipating sometimes by centuries their re-discovery by ‘Western’ scholars. His Book of Optics (Sabra 1989), written between 1011 and 1021 while under house arrest in Cairo, pioneered the psychology of perception and argued that vision occurred in the brain, rather than the eyes. He made important contributions to the study of peripheral vision and ditched the emission theory. Ibn al-Haytham’s contributions to optics, visual perception, and the scientific method (Steffens 2006) have been recognised only retroactively and have remained largely unknown to European academia.

An encouraging revisionist trend in Western (European and American) scholarship is giving long-overdue and rightful acknowledgment to non-European scholars, especially those of the “Islamic Golden Age” of the 8th to 13th centuries. Unfortunately, there is a fine line between belated revision of the history of science to correct Western bias, and boosterism [1].

Ibn al-Haytham is credited with many discoveries in binocularity, but he translated, and was therefore very familiar with, the work of Ptolemy (83-161) on this subject. Although he corrected some of Ptolemy’s errors (Sabra 1966), one of those corrections was unnecessary (Howard and Wade 1996), and Wade (1998) argues that “remarkably little’ (page 237) was added to Ptolemy’s account of binocular vision until the 17th century. Ibn al-Haytham is credited with the discovery of what came to be known as Hering’s law of equal innervation (Howard 1996), but Aristotle (384-322 BC) had previously remarked upon this, and Ptolemy had even taken a stab at a functional explanation (Wade 1998). Euclid (300-275 BC), Lucretius (99-55 BC), and Ptolemy had remarked upon induced motion, although Ibn al-Haytham was the first to utilise the now-standard example of the moon behind clouds. Scholarly types take stabs at explaining things that they don’t quite understand and therefore science generally proceeds incrementally. All of which makes it difficult to pin down the moment of “discovery” or determine the “discoverer.” 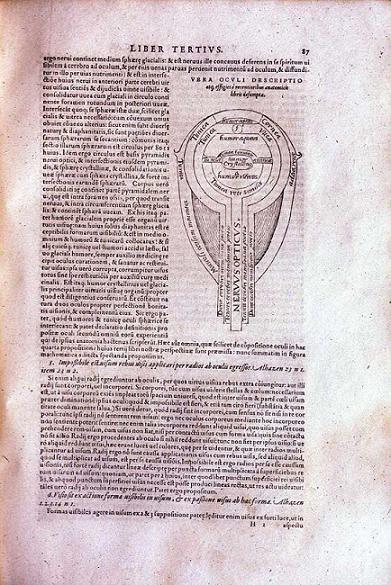 Figure 2: Diagram of the eye from Risner’s edition of Opticae thesaurus. Alhazeni Arabis libri septem Opticae thesaurus… (Basilea, 1572), the first edition of the Latin translation of Ibn al-Haytham’s Kitab al-manazir, the most important and most influential Arabic treatise on physics, that exercised profound influence on Western science in the 16th and 17th centuries. Sarton calls Ibn al-Haytham “the greatest Muslim physicist and one of the greatest students of optics of all times.” (Source). See Dr. Muhammad Abdul Jabbar Beg, The Origins of Islamic Science, section 9 Medicine.(Archived)

Khaleefa (1999), however, made the eyebrow-raising claim that Ibn al-Haytham should be considered the “founder” of both experimental psychology and psychophysics. Both these claims have been repeated incessantly on the internet (a minute’s Googling or a glance at Wikipedia will verify this) but the propagators of this claim only provide Khaleefa’s paper as evidence. Does his argument stack up? Should we consider Ibn al-Haytham to be the founder of psychophysics and experimental psychology?

The arguments presented by Khaleefa for Ibn al-Hayman’s adherence to (and advancement of) the scientific method and his important contributions to the study of vision (and experimental psychology) are quite cogent, and have been made by others (eg Howard 1996; Steffens 2006) but his paper oversteps those bounds.

Khaleefa asserts that Ibn al-Haytham is also the true “founder” of psychophysics, but his arguments on this point are much weaker. They revolve around the semantics of what it is to “found” a movement or field, and a misunderstanding of psychophysics.

On the matter of what it is to “found” a field of study, Khaleefa quotes the rather cynical definition of E G Boring (1950) from his History of Experimental Psychology [2], but then rejects this definition in favour of his own:

“It is our conclusion that Ibn al-Haytham deserves the full title of Founder of Psychophysics as well as Founder of Experimental Psychology. The Book of Optics by Ibn al-Haytham in the first half of the eleventh century, and not the Elements of Psychophysics by Fechner in the nineteenth century, marks the official “founding” of psychology because it provides not only new concepts and theories, but new methods of measurement in psychology‘ (Khaleefa 1999, page 23; italics mine).

The terms “psychophysics” and “psychology” are conflated both in the course of this paragraph and throughout the article. Psychophysics is not psychology as anybody who has attempted to teach it to psychology undergraduates will testify. Psychophysics is “the scientific study of the relation between stimulus and sensation’ (Gescheider 1997, page ix) or, as Bruce et al (1996) put it: “The analysis of perceptual processes by studying the effect on a subject’s experience or behaviour of systematically varying the properties of a stimulus along one or more physical dimensions.’ Fechner (1860) provided a battery of techniques designed to measure that relationship. Khaleefa’s confusion of the two disciplines is clear: 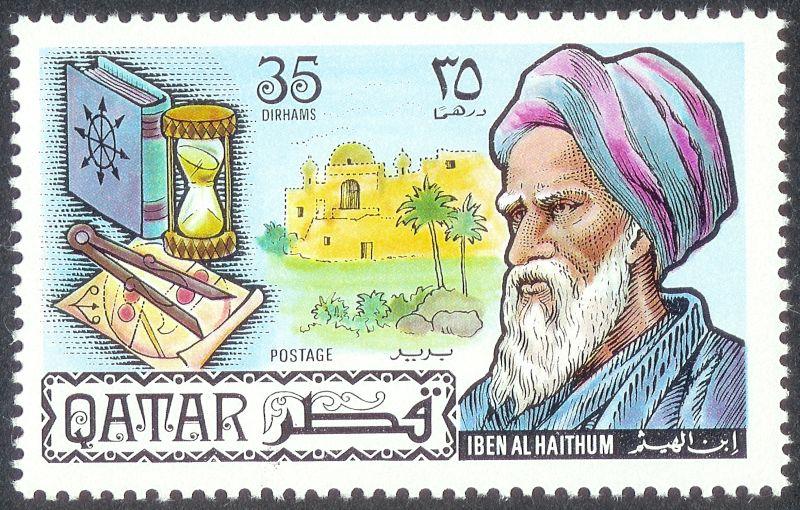 “The area into which psychologists study the link between variation in physical dimension and psychological dimension is called psychophysics, and the methodology used to describe this link is termed experimental psychology‘ (Khaleefa 1999, page 9, italics in original).

Psychophysics is a set of statistical, mathematical, and methodological tools for relating stimulus to perception. It is both the field of study and the tools to investigate it. There is no indication in the available sources (e.g. Sabra 1966, 1989) that Ibn al-Haytham used psychophysics in the sense of making quantitative judgments as a function of stimulus variables, although he certainly made qualitative judgments of a variety of psychological phenomena such as the moon illusion or induced motion.

Khaleefa argues: “If Ibn al-Haytham had lived for another ten years, he may have written an eighth and ninth chapter of The Book of Optics titled “Psychophysics and Experimental Psychology’ (page 22). Indeed, Ibn al-Haytham “may have” done so, but crucially, he didn’t. Weber, Fechner, and Wundt, among others, did.

In final support of his thesis, Khaleefa quotes Taha (1990): “It can safely be said that Ibn al-Haytham is the founder of the psychology of vision (page 273) [and] modern psychophysics (page 262).’

This composite of two statements, the page numbers of which are out of order, is a bold conclusion and I would love to read the argument that leads up to it. Unfortunately, this source (Taha 1990) is a book review from The Arab Journal of Psychiatry, and despite repeated e-mails and inter-library loan requests I have so far only been able to obtain the abstract. 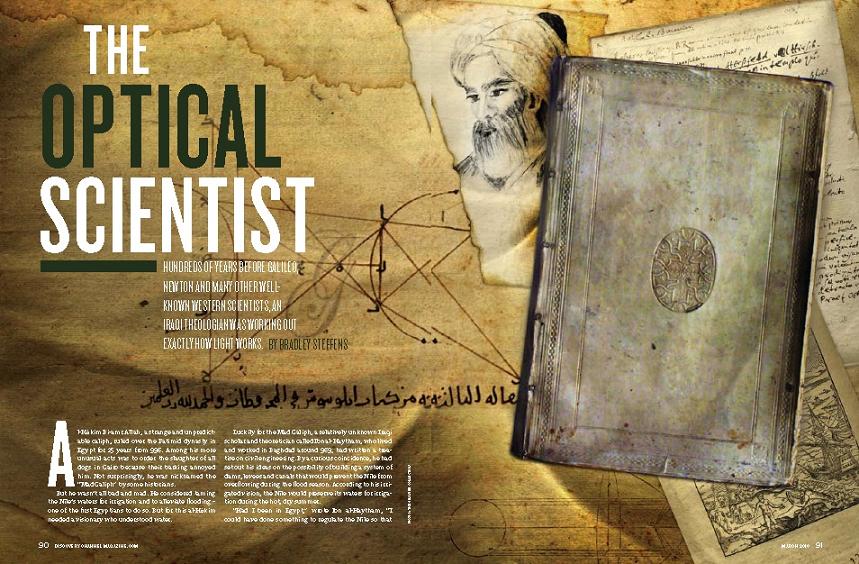 Curiously, Taha also claims that al-Haytham ‘‘was able to identify the eye layers with great precision and … identified the neural components of the visual system including the retina, the optic path and the optic chiasma’. However, Howard (1996) reports that “Alhazen’s ideas of visual anatomy were derived from the Greeks, and in particular from Galen, since dissection was not allowed in Arabic lands’. I can only assume that Taha has read Ibn al-Haytham’s work as if it was entirely original.

We have much for which we have long neglected to thank al-Haytham and other Muslim scholars of what is referred to as the “Islamic Golden Age [3].” For example, we have Thabit ibn Qurra al-Harrani (836- 901) to thank for suggesting occlusion of the good eye as a treatment for amblyopia (Loudon and Simonsz 2005), a procedure that remains the standard to this day. However, there is a difference between giving non-Western scientists their dues and the boosterism evident in some sources.

Thanks to Behzad Mansouri for information pertaining to Thabit ibn Qurrah ibn Marwan al-Harrani. Thanks also to Ian Howard, Nick Wade, and Anna Aaen-Stockdale for their comments.

[1] “Boosterism” is a term applied to the practice of inflating the importance of a subject. It was rampant in the 1950s, when mediocre US towns and business interests produced infomercials to sell themselves to the outside world, a practice brilliantly satirised in The Simpsons cartoon with the short films Springfield: a City on the Grow! and The World Without Zinc!

[2] “When the central ideas are all born, some promoter takes them in hand, organizes them, adding whatever else seems to be essential, publishes and advertises them [and] insists upon them’ (Boring 1950, page 194).

[3] A term beloved of Orientalists (Said 1979), since it defines the achievements of scholars and scientists in Muslim lands (and the scientists and scholars themselves) in terms of their religion rather than their research.