Possibly the earliest hospital in Islam was a mobile dispensary following the Muslim armies, dating from the time of Prophet Mohammed (PBUH). By the 12th century, the hospital had become a very advanced institution. 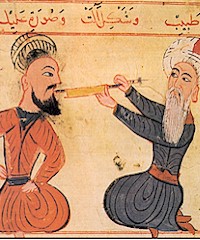 Possibly the earliest hospital in Islam was a mobile dispensary following the Muslim armies, dating from the time of Prophet Mohammed (PBUH); a tradition which remained throughout the centuries of Islamic Civilisation.

Decades elapsed, before the first hospital building was built in Damascus in 706 by Al-Walid, the Umayyad Caliph. It was to cater for all sorts of patients (including the blind and even lepers). Its equipment, staff and organisation, served as a model for other hospitals to follow.

Caliphs Harun al-Rashid and Al-Mansur both had hospitals built in Baghdad.’ In Cairo, the first hospital was established at al-Fustat by Ibn Tulun, governor of the city in 872.

By the 12th century, the hospital had become a very advanced institution; witness al-Nuri hospital, built in 1156 by Nur al-Din Zangi, a hospital where patients were well fed, and cared for, and where there was a large library for teaching. In Cairo, in 1285, Sultan Qalaun al-Mansur built the largest of all hospitals, described by Durant: (see reference below)

`Within a spacious quadrangular enclosure four buildings rose around a courtyard adorned with arcades and cooled with fountains and brooks. There were separate wards for diverse diseases and for convalescents; laboratories, a dispensary, out-patient clinics, diet kitchens, baths, a library, a chapel, a lecture hall, and particularly pleasant accommodations for the insane. Treatment was given gratis to men and women, rich and poor, slave and free; and a sum of money was disbursed to each convalescent on his departure, so that he need not at once return to work. The sleepless were provided with soft music, professional story-tellers, and perhaps books of history.’