British Prime Minister David Cameron, who arrived in Jeddah on November 6h, 2012, paid a historic visit to Dar Al-Hekma College in Jeddah, in the frame of his visit to the Kingdom of Saudi Arabia. 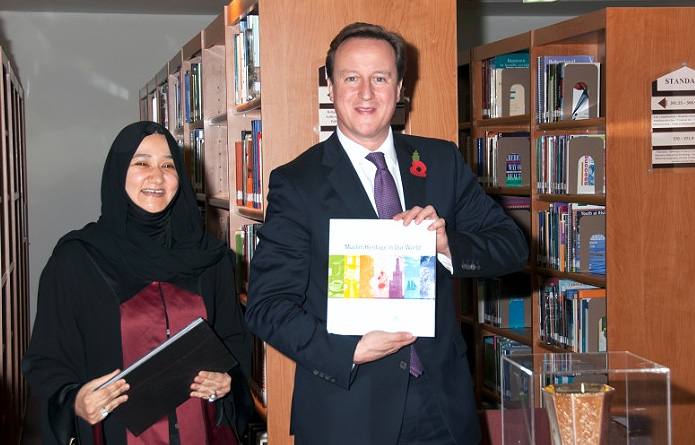 British Prime Minister David Cameron, who arrived in Jeddah on November 6h, 2012, paid a historic visit to Dar Al-Hekma College in Jeddah, in the frame of his visit to the Kingdom of Saudi Arabia.

During this visit, Mr David Cameron has expressed his admiration for Dar Al-Hekma College’s achievements and accomplishments, and its role in educating and empowering women in Saudi Arabia and the region.

One of the highlights of David Cameron’s visit to the college was the round table conference with selected students from the law program, and a few alumnae members. “It was an inspirational session with a fascinating group of ladies, who will clearly do amazing things for the Kingdom and our world,” he said at the end of the conference.

The Prime Minister was welcomed at the college by the Dean, Dr. Suhair Hassan Al-Qurashi, herself graduate of Cambridge University, members of the Board of Trustees, senior management, students and the faculty.

“It brings us great pleasure and pride to host British Prime Minister David Cameron at our campus,” said Dr Al-Qurashi. “His visit signifies his support for our college’s vision of a bright future for our graduates excelling in their fields, as we also help raise the bar for higher education in the Kingdom. In order to achieve our long term objectives of excellence in higher education we are looking forward to further expanding our partnerships with eminent educational institutions in the UK. Among its various academic programs, Dar Al-Hekma has the distinction of offering one of the best legal studies program for women in the Kingdom, which has been developed in consultation with academics and professionals trained under the British Legal system and with advice from City University in London.”

Dar Al-Hekma College is a private, non-profit institution of higher education established in 1999 as a private college for women in Jeddah, Saudi Arabia. The College offers bachelor’s degree programs in the School of Business, Law and Diplomacy, Design and Architecture, and Education and Allied Sciences; and an MBA program at the graduate level. The College is nationally accredited as a non-profit institution of higher education under the Ministry of Higher Education in the Kingdom of Saudi Arabia.

During this historic visit, UK Prime Minister was presented with a copy of “1001 Inventions: Discover Muslim Heritage in Our World”, published in several editions by the Foundation for Science, Technology and Civilisation (FSTC) since 2006. FSTC has close relationship with Dar Al-Hekma College in Jeddah. The college runs a course module entitled The Golden Millenium which uses the 1001 Inventions book and muslimheritage.com as a main resource.

This is the second time a British Prime Minister poses with the “1001 Inventions” book. The first was PM Tony Blair when he was presented on 27th September 2006 with he book by HRH Prince Mohammed bin Nawaf, the Saudi Amabassdor at the United Kingdom.

Tony Blair had gratefully accepted a copy of the acclaimed book. His endorsement took place at a special ceremony at the Labour Party political conference in Manchester in the UK when Blair hosted all Arab and Islamic Ambassadors on the sidelines of the conference. The subject of Muslim heritage in our world came up high on the discussion.

The 1001 Inventions initiative has received recognition from industry leaders, statesmen and academics from around the world. In 2011, 1001 Inventions was declared the World’s Best Touring Exhibition by the Museums and Heritage Excellence Awards in London. The exhibition’s introductory film “Library of Secrets“, starring Sir Ben Kinglsey, has been downloaded more than 20 million times and won more than 20 industry awards including “Best Film” recognition in Cannes, Los Angeles and at the New York Film Festival. In 2010, 1001 Inventions was presented with the Google-sponsored Science and Technology Award by HRH Princess Badiya bint El Hassan at the Mosaic Talent Awards.