by The Editorial Team Published on: 30th July 2008

The first stone was laid on July 16, 2008 at the Louvre's new Arts of Islam gallery. With this initiative, France's famous Museum is readying to receive its groundbreaking Islamic section that will showcase the world's most comprehensive Islamic art collection. 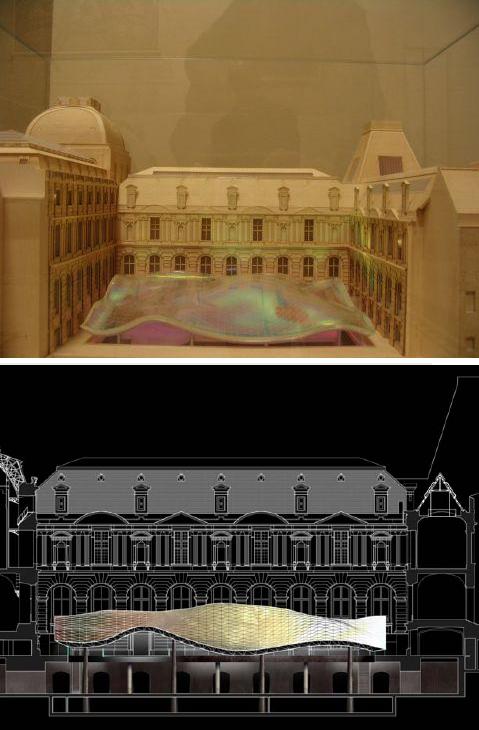 The first stone was laid on July 16, 2008 at the Louvre’s new Arts of Islam gallery, the first major modern architectural addition to the museum since its glass pyramid in the 1980s. French President Nicolas Sarkozy and Prince Alwaleed bin Talal of Saudi Arabia, a major donor for the project, took part in the ceremony to start work on the addition, which includes a shimmering glass wave hanging over a 19th-century courtyard, La Cour Visconti. The project’s architects say it resembles a flying Muslim scarfhead, a cloud or a flying carpet. The wing is scheduled to open in 2010. Afther the completion of the enlargement works, the total surface of the Department of Islamic Arts at the Louvre will be 6545 m2 on three stories. The wing will display a vast collection of Islamic art from the 7th to the 19th century and from across three continents.

At the groundbreaking ceremony, President Sarkozy spoke of the need for dialogue between the West and the Middle East. This gallery “will be the chance for all French and foreign visitors to the Louvre to see that Islam is progress, science, refinement, modernity, and that fanaticism in the name of Islam is to flout Islam,” he said. He added that the new section will reflect the breadth of inspiration and creativity of the Islamic art and the beauty of Islam.

The gallery’s construction, which will cost $100 million, will be led by French architect Rudy Ricciotti and Italian colleague Mario Bellini. The light-filled ground level, under the wave, will host sturdier artworks, while a second underground level will shelter delicate items such as manuscripts and carpets.

Islamic Art in the Louvre

The Department of Islamic Art is currently closed, but scheduled to reopen in 2010 in a new gallery in the Cour Visconti. Several thousand objects will be on display, reflecting the breadth of inspiration and creativity of the Islamic lands over thirteen centuries and three continents.

The Department of Islamic Art, the youngest of the museum’s eight departments, was created in 2003. Its origins can be traced back to the Islamic section created in 1890 within the Department of Decorative Arts by two curators: Gaston Migeon and Emile Molinier. The latter opened a first room devoted to the Islamic collection in 1893. The bequest of the baronne Delort de Gléon in 1912 enriched the section with prestigious objects from her husband’s collection. Her endowment led to the creation of the Salle Delort de Gléon in 1922 in the Pavillon de l’Horloge. After World War II, the Far Eastern works were transferred to the Musée Guimet, and the Islamic section was incorporated into the Department of Near Eastern Antiquities; the objects were exhibited in the Salle de la Chapelle of the Pavillon de l’Horloge. A small group of works was subsequently exhibited in two rooms at the end of the installation of the Department of Near Eastern Antiquities. The Richelieu wing, formerly occupied by the Ministry of Finance, was transformed into a new exhibition area, inaugurated in 1993, making it possible to exhibit a larger number of works from the Islamic collection. The display was situated on the lower ground floor. In late 2007, a new exhibition space in the Cour Visconti will be opened, which means that the Department of Islamic Art will be based near the rooms devoted to late Antiquity in the Mediterranean region.

The Creation of the Collection

The history of the collection reflects both history in the broadest sense and the history of artistic taste. Certain objects illustrate the centuries-old relationship between France and the Islamic world. A certain mystery still surrounds the fragments of the shroud of Saint Josse (a piece of 10th-century Iranian cloth), which entered the Louvre in 1922. A king of England, who was very close to two of the most eminent members of the First Crusade, presented the cloth (before 1134) to the abbey of Saint-Josse, where it was used to wrap the relics of the saint of the same name. The precious cloth was transferred to the Louvre some seven centuries later. The “Baptistery of Saint Louis,” which belonged (probably as early as the 14th century) to the treasury of the Sainte-Chapelle in the Château de Vincennes, was transferred to the Louvre in 1832 on the orders of Louis-Philippe, as indicated by its inventory number (LP). An Ottoman cup which had belonged to Louis XIV featured in the inventory of the Musées Royaux (MR) after the fall of Napoléon.

Donors played a key role in the growth of the collections, particularly in the late 19th and early 20th centuries. Among the works thus acquired are those whose inventory numbers begin with the letters K or R, corresponding to the initials of some of the museum’s great collectors and patrons: Raymond Koechlin and Salomon de Rothschild and his wife.

At present, the department exhibits over a thousand works produced in Islamic countries over a period of over thirteen centuries. Every year the collection is enriched by new items in the form of purchases or gifts. The current installation is essentially chronological, providing an overview of different kinds of items produced since the beginning of Islam in the 7th century. This approach, although coherent, is largely a consequence of the limited exhibition space available. The existing installation will be replaced by a completely new one in the Cour Visconti, based on the juxtaposition of various cultures and artworks dating from a given period. The Maghreb, which is largely absent at present (for historical reasons relating to the creation of the collection), will be better represented.

The objects on display in the galleries are mostly luxury items that were made for the rich and powerful. The installation starts with a room devoted to the ancient Iranian city of Susa, where teams from the Louvre have conducted a many excavations since the 19th century. The installation highlights both the homogeneity of Islamic art (which makes it instantly recognizable) and its extraordinary creativity with regard to common themes—a creativity expressed throughout the centuries in the various geographical, cultural, and political entities of the Islamic world.

An exceptional model of the universe

Among the rarest pieces in the collection of Islamic art in the Louvre, a celestial globe occupies an exceptional status. This is the oldest globe known from the eastern part of the Islamic world. According to the inscription, the globe was made by Yûnus Ibn al-Husayn al-Asturlabî, an otherwise unknown astronomer or instrument maker. The globe comprises all of the constellations mentioned in the Almagest, the great book of astronomy by Ptolemy written in Greek in Alexandria in the 2nd century CE. But their coordinates were modified on the globe according to the time elapsed between the calculations of Ptolemy and the year 540 H/1144-45 CE.

No functional celestial globe has come down to us that predates the coming of Islam. This celestial globe is a three-dimensional model of the universe, and is the third-oldest globe from the Islamic world. Only two others, created by an Andalusian astronomer, are older, and this is the oldest known globe from the eastern part of the Islamic world.

The globe differs from its Andalusian predecessors by the use of an alphanumeric system of notation (abjad) for numbering the stars within each of the 120 Ptolemaic constellations. Each of the 1,025 stars depicted is represented by a dot of inlaid silver, a technique that was unknown in the West. The diameter of the point varies depending on the magnitude of the star. The two hemispheres that make up the globe are joined along the Milky Way. The globe represents the final celestial sphere, that of fixed stars, showing thus a very precise version of the catalogue of stars incorporated in Ptolemy’s Almagest. The difference between Islamic globes and what we know about ancient globes lies in the fact that Islamic globes represented the constellation from the front, instead of from the back.

An astrolabist who was also an artist

Scientifically, this globe is exceptionally precise. It was created by a master astronomer who was capable, as the inscription engraved in the vicinity of the South Pole indicates, of recalculating astronomical calculations: “This globe comprises all of the constellations mentioned in the Almagest, after modification according to the time elapsed between the calculations of Ptolemy and year 540 of the Hejira: that is, fifteen degrees and eighteen minutes. Created by Yûnus Ibn al-Husayn al-Asturlabî in the year 539”. The iconography of the constellations faithfully follows the model presented in the Kitab suwar al-kawakib (Book on the Constellations of Fixed Stars) by ‘Abd al-Rahman al-Sufi, a well-known astronomer from the 10th century. In addition to its remarkable scientific precision, the work is equally captivating due the quality of the engraving. Many of the clothed figures, including Cassiopeia, feature drapery comparable to figures in manuscripts. Their sinuous and stylized folds are characteristic of the art of the book that continued to develop into the mid-13th century, and even beyond, in the Arab part of the Islamic world.

The following works discuss items and themes related to the Louvre collection of Islamic art:

“Science for All” Report Released