In which era were classification of animals, world maps, medical knowledge of the body, the invention of trebuchet and other scientific, technological and cultural advances developed? One might assume that such advances were most likely to have taken place in Greek or Renaissance times. However, last week's "Incredible Inventions and Extraordinary Experiments: Islamic Science Activity Day" at the University of Cambridge helped revise perceptions of when such developments took place. 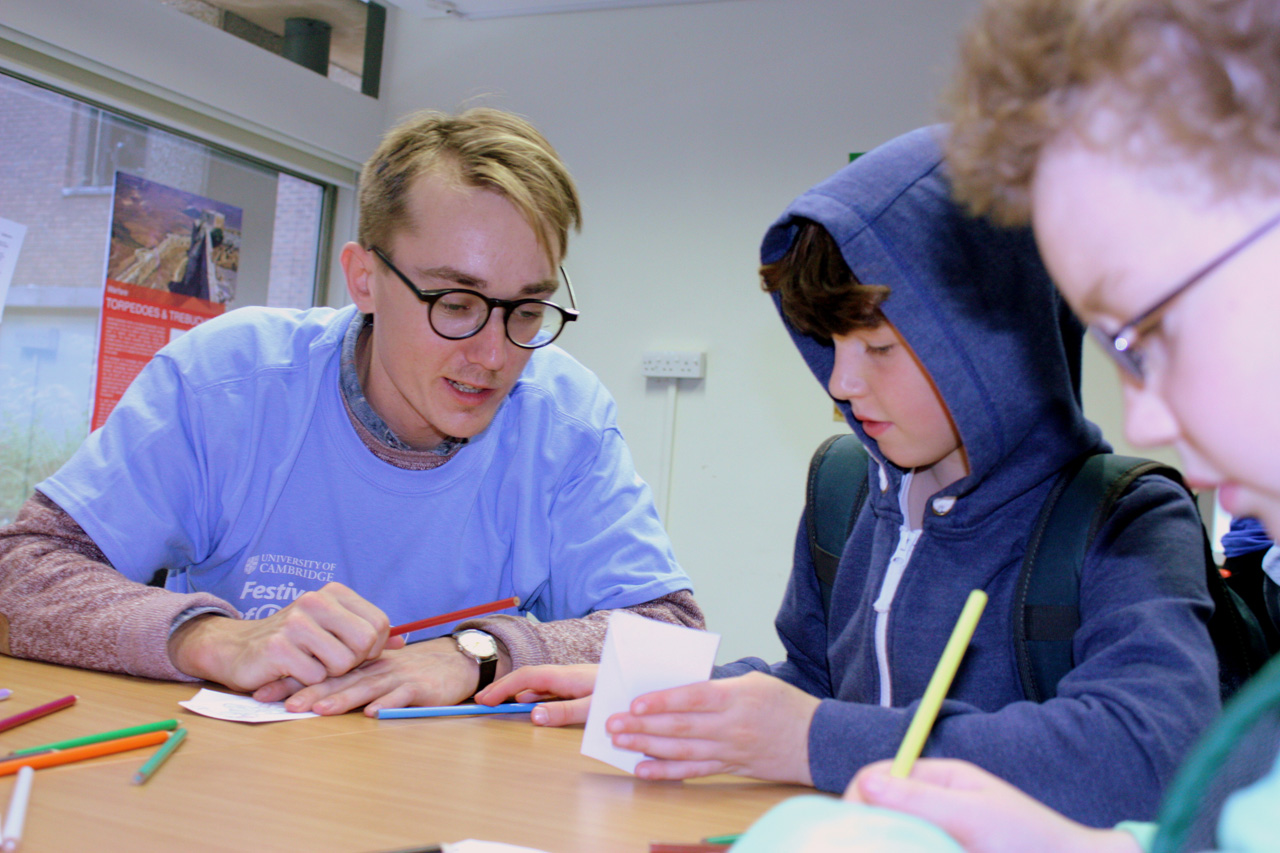 Attendees colouring in soldier targets for the trebuchet 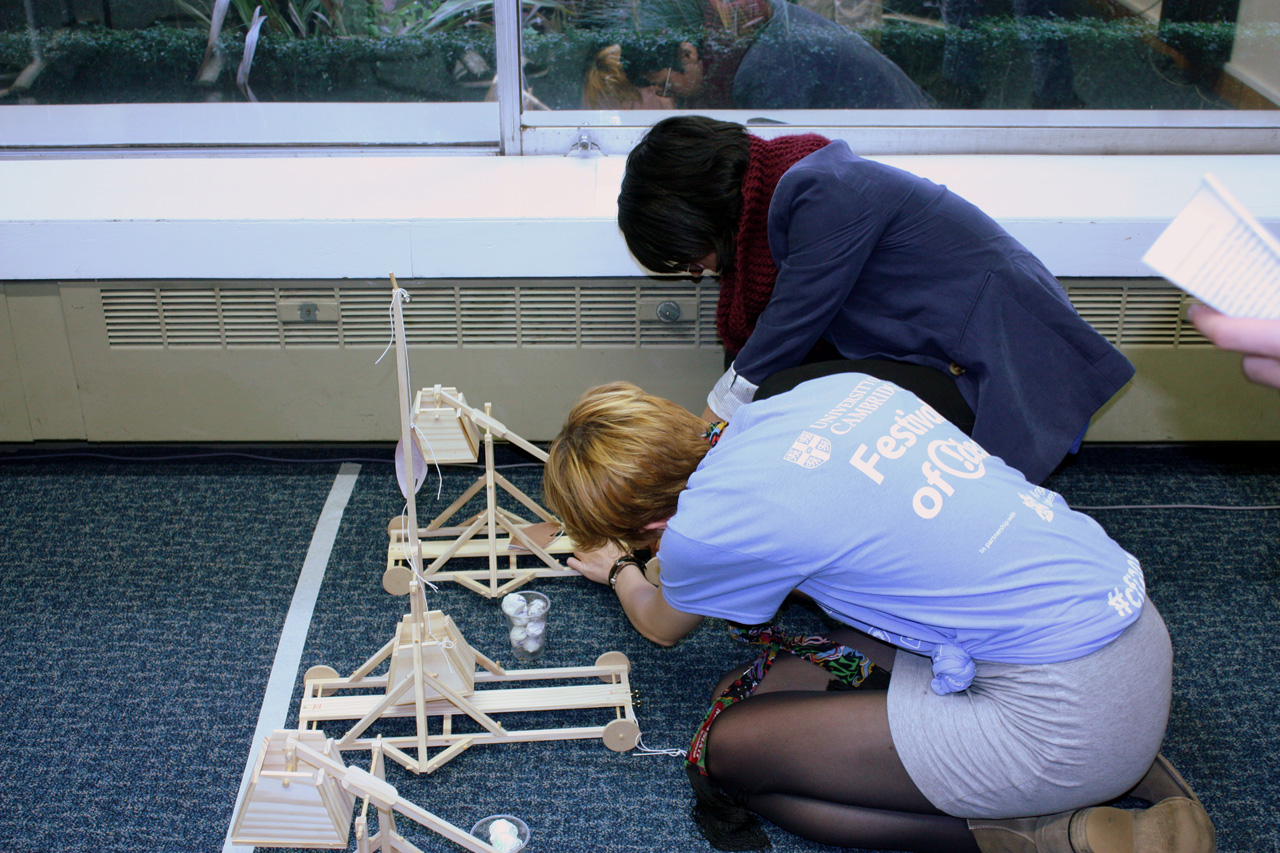 A volunteer demonstrating how the trebuchet works

During the afternoon, illustrated manuscripts were brought to life by hands-on activities and model devices. From anatomy to siege weapons, visitors were able to discover the scientific heritage and some major contributions in the fields of  medicine, physics, education and mathematics, made by scientists in the Muslim civilisation that went on to shape our world.”(Source).

In which era were classification of animals, world maps, medical knowledge of the body, the invention of the trebuchet and other scientific, technological and cultural advances developed ? One might assume that such advances were most likely to have taken place in Greek or Renaissance times. However, last week’s “Incredible Inventions and Extraordinary Experiments: Islamic Science Activity Day” at the University of Cambridge helped revise perceptions of when such developments took place.

This fun-packed event proved popular with all ages and backgrounds and there was high attendance throughout the afternoon. Subject specific manuscripts and activities relating to these four fields captured the spirit of excitement that spurred great scientific thinkers of the past to inspire an equally harmonious and stimulating future.

From re-enacting the military science behind the trebuchet, configuring the knowledge about the body, from the classification of animals to drawing a modern map, the “Incredible Inventions and Extraordinary Experiments” one day exhibition not only seemed informative and engaging but also, highly entertaining for those who attended. 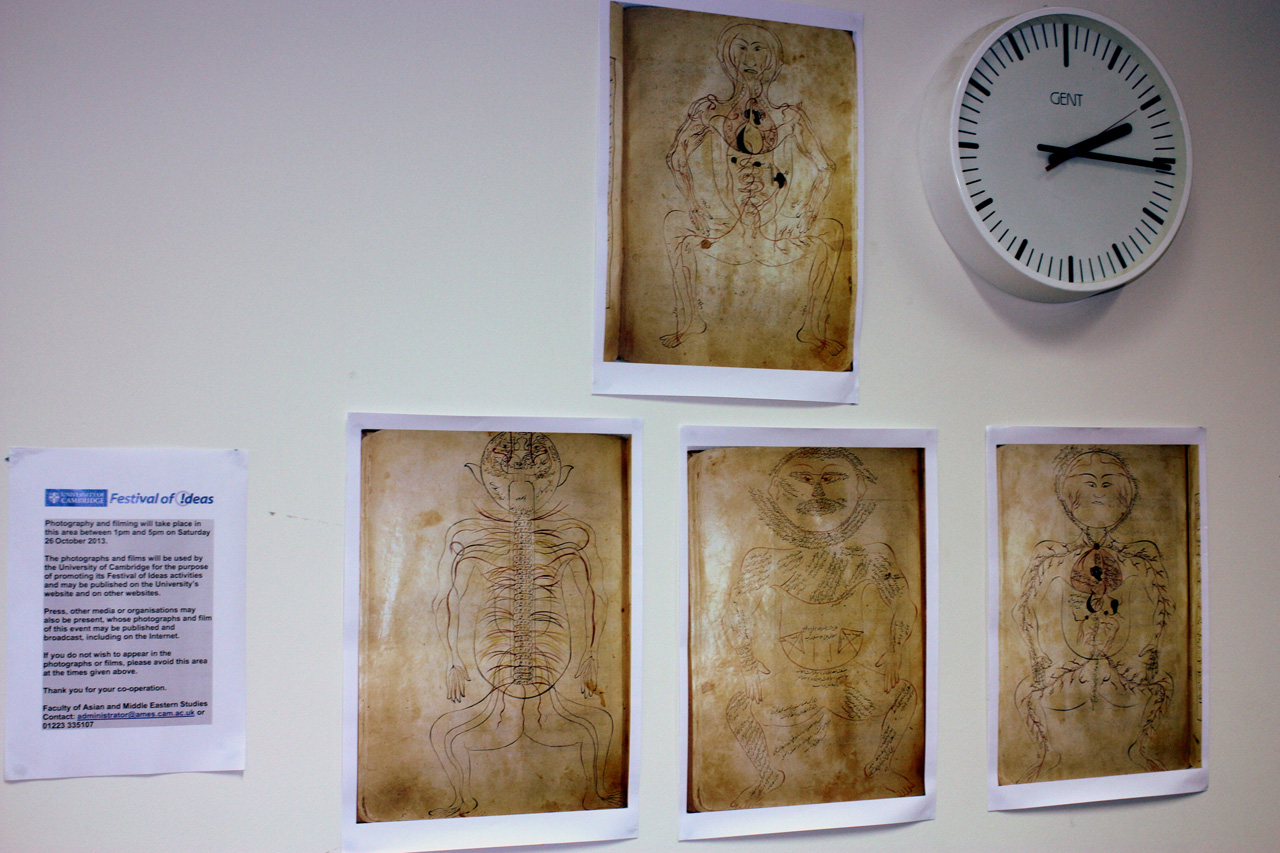 By recognising the great works of scholars such as Mansur Ibn Ilyas, a 14th century Persian Physician, and zoologist Zakariya al-Qazwini, attendee’s not only expressed their curiosity and appreciation, they also thanked Elspeth Carruthers*, the exhibition’s founder and arranger.

What is more, some of the attendees were led to question why these manuscripts are not as accessible as those of other European scientists, for example Galileo. Science within Muslim civilisation, as well as in other cultures, contributed to promote scientific advancement, and hence deserves to be accounted for in all narratives of science history and made accessible to the public. 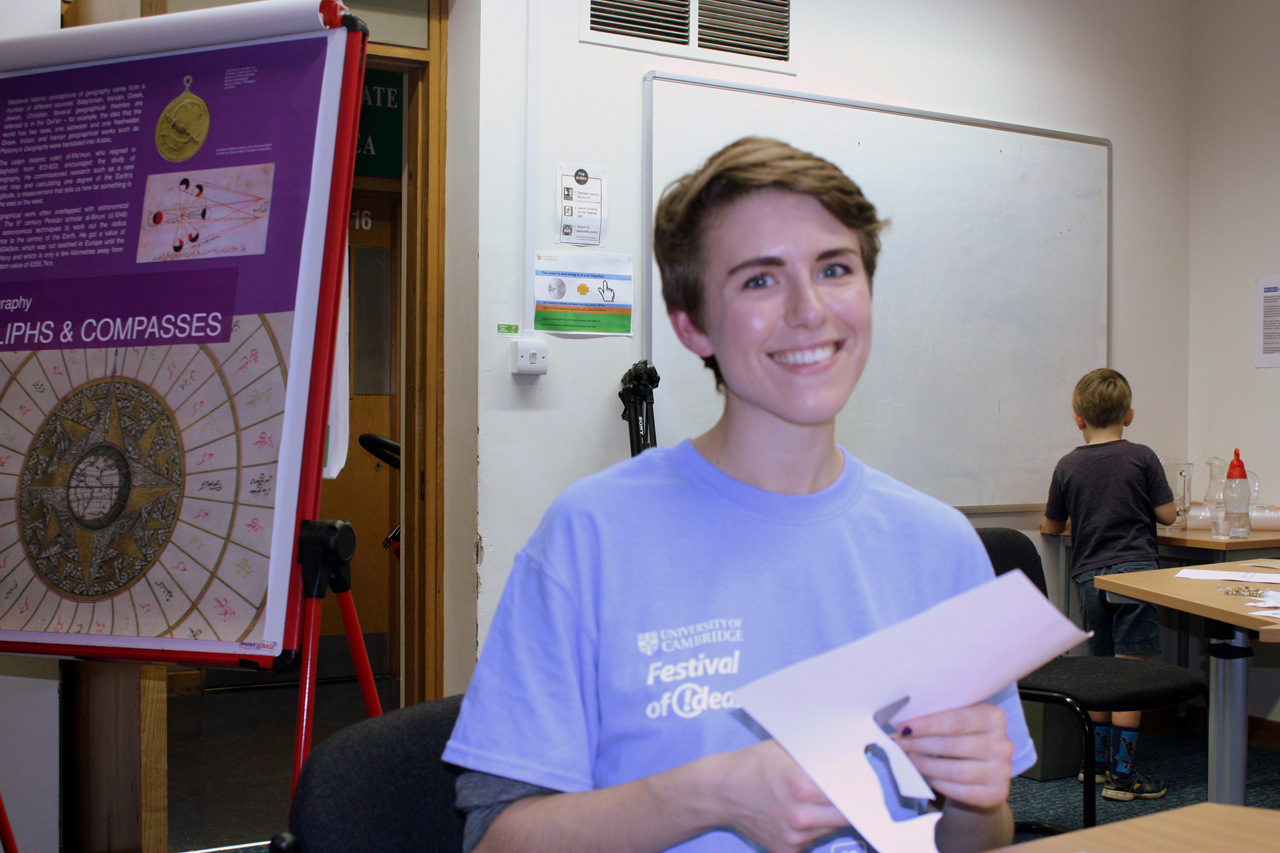 Elspeth Carruthers, University of Cambridge BA Graduate in Arabic, MA student in Arabic Literature at SOAS and founder of the exhibition described this as one of her driving motivations behind studying Arabic. In a statement to MuslimHeritage.com, Elspeth said that she “undertook Arabic at university because it was something different to what I knew and what I am left with is the ability to not only engage with people that I have never had the opportunity to engage with in the past, but also support the promotion of fascinating and inspiring works such as those mentioned in the exhibition. This is not to say that current knowledge regarding the Muslim civilisation is not important, rather it is to say they are incomplete. In continuing and developing exhibitions such as today’s, I hope to facilitate a less skewed vision on this rich region.” 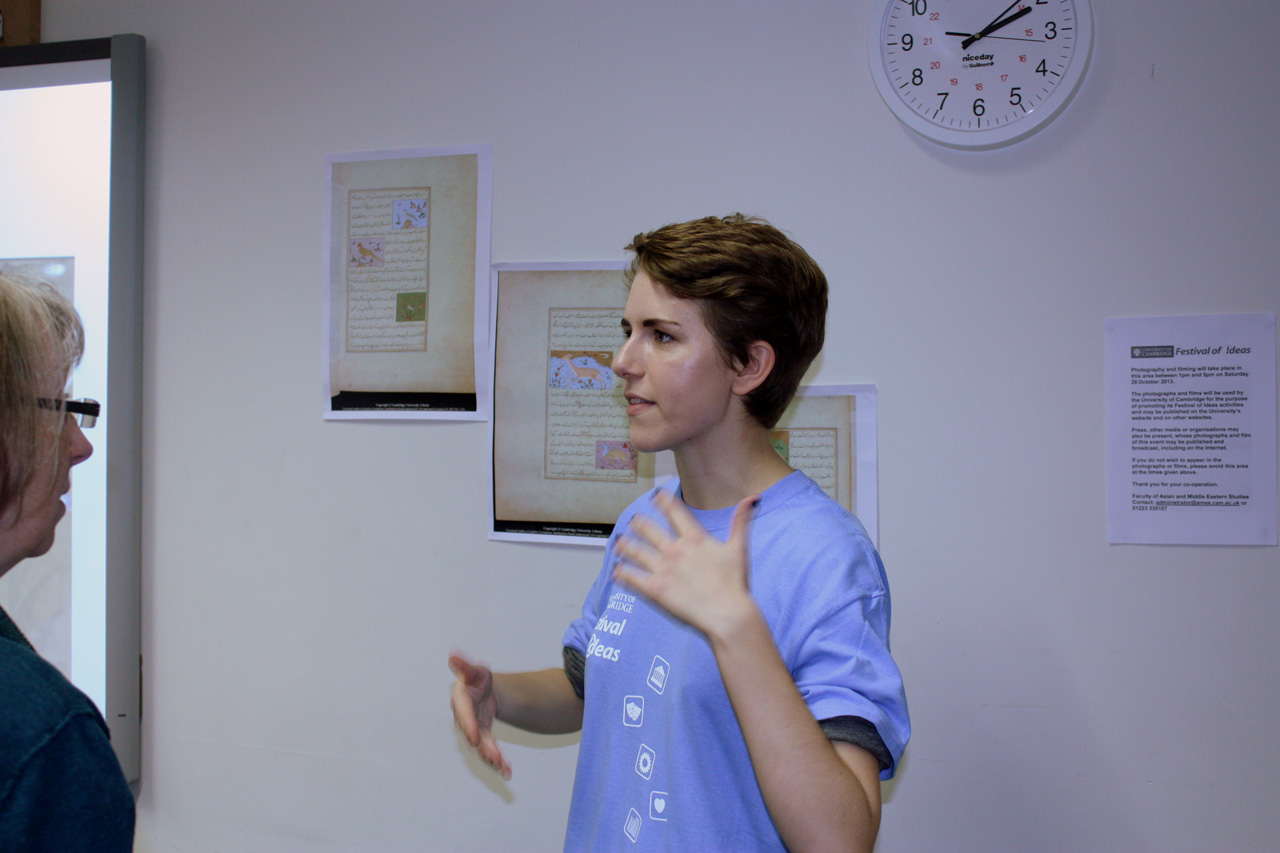 Elspeth described the exhibition as fitting well with this year’s “Frontiers” theme for the University of Cambridge’s ‘Festival of Ideas’ as it portrayed the transfer of knowledge developed and added to by scientists living in the Muslim world. Further, it breaks down barriers by offering the rigour of academic thought whilst making this carefully examined information accessible, interactive and engaging for the general public. FSTC welcomes such initiatives which promote the rich and sometimes forgotten scientific, technological and cultural legacy produced during the classical age of the history of the Islamic world, also known as the “Golden Age of Science” in the Muslim civilisation. Globalisation is not a new phenomenon and one only needs to view the content of such manuscripts and books from the Golden Age of Science in order to come to this realisation. 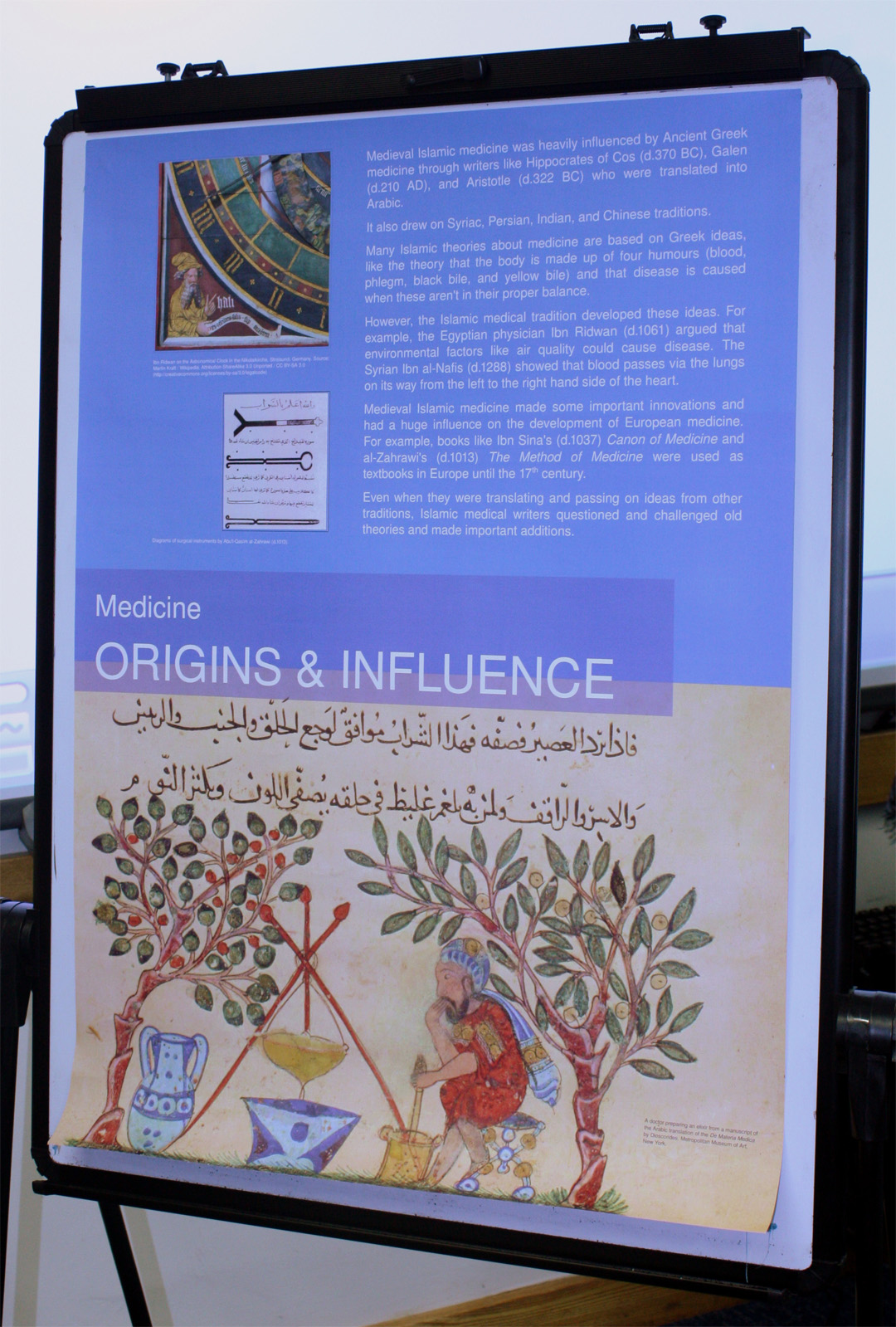 *Elspeth is a University of Cambridge BA Graduate in Arabic who is currently undertaking her MA in Arabic Literature at the School of Oriental and African Studies at the University of London.