As a means to explore ancient civilisations contributions to modern civilisation, the National Geographic Society, The Foundation for Science, Technology and Civilisation (FSTC) and supporting organisations attended the “Dialogue of Civilisations International Symposium” held in Turkey this May, 2014. 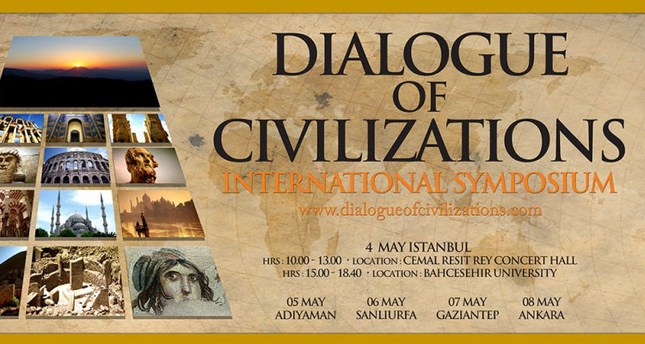 The symposium was hosted by National Geographic and the Civilisation Studies Centre (Medam) at Bahçeşehir University in Istanbul, both long term associates of FSTC and 1001 Inventions. Experts who specialise in cultures of the ancient Maya, Egypt, Mesopotamia, Indus Valley, China and the Islamic world delivered presentations throughout the course of the week whilst visiting some of the most extraordinary archaeological sites within Turkey and the world. Kick-starting from the admiration and exploration of architectural wonders such as the Blue Mosque (Sultan Ahmet Camii) in İstanbul, the tour preceded on to uncover archaeological feats in Adıyaman, Şanlıurfa, Balıklıgöl, Harran, Gaziantep and Ankara.

Whilst overlooking the formidable statues built under Antiochos during Greek civilisation, exploring the striking mosaics in Göbekli and unfinished sculptures dating back to the Hittite empire, much can be learnt from these ancient civilisations. Including, Antiochos’s tolerance towards diverse backgrounds and beliefs by promoting new rituals; The preservation of ancient temples such as those at Göbekli Tepe and how far reaching our civilisations are; How ancient gods from the Hittite empire stood between craft and nature, past and present.

These messages throughout the conference resounded with that of FSTC and its affiliates – to celebrate and continue building upon the rich contributions of science, technology and civilisation inherited by previous civilisations. The recognition and preservation of their strong foundations will help create a culture of collaboration over competition, and enhancement over detraction.

President of FSTC and Chief Editor of 1001 Inventions, Professor Salim al-Hassani, drew the symposium to a close by highlighting the invaluable contributions that were made by all civilisations and cultures, especially those of the Muslim World.  Professor Al-Hassani demonstrated how these have subsequently helped shape modern society. It is true to say that modern advancements may well not have taken place without the knowledge inherited by ancient civilisations such as that of the Greek or Roman contribution, however, such advancements are equally bound to those of the Chinese, Indian and Muslim contributions.

One essential way in which Professor Al-Hassani envisions creating a similar ambiance is by introducing these contributions in the school curricula. It is most unfortunate that most science subjects only give names of European inventors and ignore thousands of male and female scientists over a period of a thousand years; usually referred to as the Dark Ages or Medieval Ages. If we were to enhance the dialogue of civilisations, if we were to create an environment of collaborations and respect between cultures, we must recognise the contributions made by all cultures.  Professor Al-Hassani subsequently presented various 3D animations of machines and devices recreated from the manuscripts of great engineers and scientists who originated around the locality of Gaziantep, Şanlıurfa, Diyarbakır, Adıyaman, where the conference delegates toured.

FSTC welcomes such initiatives taken by National Geographic and its network organisations in creating and promoting appreciation and cooperation in this increasingly interconnected world.

In the media and press

Prof. Bekir Karlığa
Prof. Karliga is a professor of Islamic philosophy. He is also the Alliance of Civilizations Chariman of The National Coordination Commitee in Turkey. He has taught for more than 30 years in Marmara University Faculty of Theology.

Prof. Salim Al Hassani
Prof. Hassani is an honorary professorial fellow at the school of languages, linguistics and cultures, Faculty of Humanities at the University of Manchester. He is chairman of the Foundation of Science, Technology and Civilisation, founder of the academic portal and chief editor of the 1001 inventions: Enduring Legacy of Muslim Civilisations book.

Prof. Charles Burnett
Prof. Burnett is a professor of the history of Islamic influences in Europe at the Warburg Institute, University of London. He received his PhD from Cambridge University. His work has centred on the transmission of Arabic science and philosophy to Western Europe, which he has documented by editing and translating several texts that were translated from Arabic into Latin.

Prof. Kenan Gürsoy
Prof. Gürsoy is currently the ambassador of Turkey in the Vatican. He received his PhD in philosophy from Atatürk University. He taught at Ankara University and Galatasaray University. His research area includes history of philosophy, systematic philosophy and logic.

Prof. Heath W. Lowry
Prof. Lowry is a professor of history and the coordinator of Ottoman History Research Center of Bahcesehir University. He received his PhD from the University of California at Los Angeles. Previously, he was the chairman of the department of Near Eastern studies of Princeton University. He specialises in Ottoman history in the Balkans.

Prof. Ralph H. Salmi
Prof. Salmi is a professor of political science at the California State University, San Bernardino and also served as the director of Center for Islamic and Middle Eastern Studies at this university. His research area includes Middle Eastern studies, Islamic studies and conflict resolution.

Prof. Elizabeth F. Carter
Prof. Carter is a professor of archeology at UCLA Cotsen Institute of Archaeology. She obtained a PhD from The University of Chicago. Her research area includes Bronze Age urban sites in Turkey, mainly in the southeast.

Prof. Mark Kenoyer
Prof. Kenoyer is a professor at the department of anthropology at the University of Wisconsin, Madison. He has a PhD in South Asian studies from the University of California, Berkley. His research interests include the archaeology of early urbanism and state level society, ethnoarchaeology and Indus Valley civilization. He has been excavating at Harappa, Pakistan since 1986.

Prof. Salima Ikram
Prof. Ikram is a professor of Egyptology and head of Egyptology Unit of The American University in Cairo. She has a PhD from Cambridge University. She has directed the Animal Mummy Project, co-directed the Predynastic Gallery Project and is co-director of the North Kharga Oasis Survey.

Prof. Takeshi Inomata
Prof. Inomata is a professor at the School of Anthropology of The University of Arizona. He has a PhD from Vanderbilt University. His research area includes archaeology, complex societies, Mesoamerica, households and political organisation in prehispanic Maya society. He has worked at the Maya sites of Aguateca and Ceibal in Guatemala.

Prof. Abdullah Ekinci
Prof. Ekinci is a professor of medieval history at the department of history at Harran University. He received his PhD in history from Fırat University. His research area includes movements of thought, history of cities and institutions in the Middle East and ancient cities in southeastern Turkey.

Prof. Klaus Schmidt
Prof. Schmidt is a professor of archeology at Deutsches Archäologisches Institut. He has been leading excavations at Göbeklitepe since 1996. Göbeklitepe is the site where the oldest temple of the world is claimed to be found.

Prof. Kutalmış Görkay
Prof. Görkay is a professor at the department of archaeology of Ankara University. He received his PhD in classical archaeology from the same university. He did research in Münster University and Oxford University. His research area includes Anatolian archaeology, especially ancient sitesi in Ankara and West Turkey. He is also an expert of ancient Zeugma site.

Prof. Li Liu
Prof. Liu is professor in Chinese archaeology at Stanford University East Asian languages and cultures department. She has a PhD in Anthropology from Harvard University. Her research area includes archaeology of early China, ritual practice in ancient China and cultural interaction between China and other parts of the Old World.

Prof. Richard Hansen
Dr. Hansen is an affiliate research assistant professor in the department of anthropology at Idaho State University. He has a PhD in archaeology from UCLA. He is a specialist on the early Maya and is the director of the Mirador Basin Project in northern Guatemala. He is also the founder and president of the Foundation for Anthropological Research and Environmental Studies.

Dr. Burhan Köroğlu
Dr Köroğlu is the director of Bahcesehir University Civilization Studies Center. He earned his PhD in Islamic philosophy from Marmara University Faculty of Theology and taught at the same faculty. He also worked for research centres in various Middle Eastern countries. He specialises in history of Islamic philosophy and Neoplatonism.

Dr. İbrahim Kalın
Dr Kalan is currently the advisor to the Prime Minister of Turkey. He got his PhD in comparative philosophy from George Washington University. He was the coordinator of Foundation for Political, Economic and Social Research.

Dr. Fabio Amador
Dr Amador is an associate research professor of anthropology at Columbian College of Arts and Sciences. He is also an archaeologist with a research focus in ceramic analysis, identity and sociocultural complexity in Southeastern Mesoamerica and the Northern Maya Lowlands. His research area also includes underwater, maritime and nautical archaeology.

Dr. Augusta McMahon
Dr McMahon is a lecturer at Cambridge University division of archaeology. She has a PhD in Mesopotamian Archaeology from the University of Chicago. She has excavated in Iraq, Syria, Turkey and Yemen and has been a member of the Archaeology Division since 1995.

Dr. Ling Qin
Dr Qin is an associated professor at school of archaeology, Peking University. He specialises in Neolithic China. He has research projects in Zhejiang about Liangzhu culture’s jades, in Yunnan and Guangdong about early subsistence strategy.

Dr. Rakesh Tewari
Dr Tewari is the former director of the State Archaeology Department of Government of Uttar Pradesh, India. He has a PhD in ancient history from Avadh University. He has more than 35 years of experience in field archaeology in Uttar Pradesh, Uttaranchal, Jharkhand, Chhatisgarh, Madhya Pradesh, Maharashtra and south India.

Dr. Oswaldo Chinchilla
Dr Chinchilla is an assistant professor of anthropology at Yale University. He has a PhD from Vanderbilt University. He is an expert on the Mayan civilisation and has conducted a documentary research on the pre-Columbian peoples of Guatemala. He also focuses on Mesoamerican religion and iconography.

Dr. Renee F. Friedman
Dr Friedman is the current director of the Hierakonpolis Expedition, the largest site of the predynastic period still extant and accessible anywhere in the Nile Valley. She has a PhD in Egyptian Archaeology from the University of California, Berkeley. She is also the Heagy Research Curator in the department of Ancient Egypt and Sudan at the British Museum.