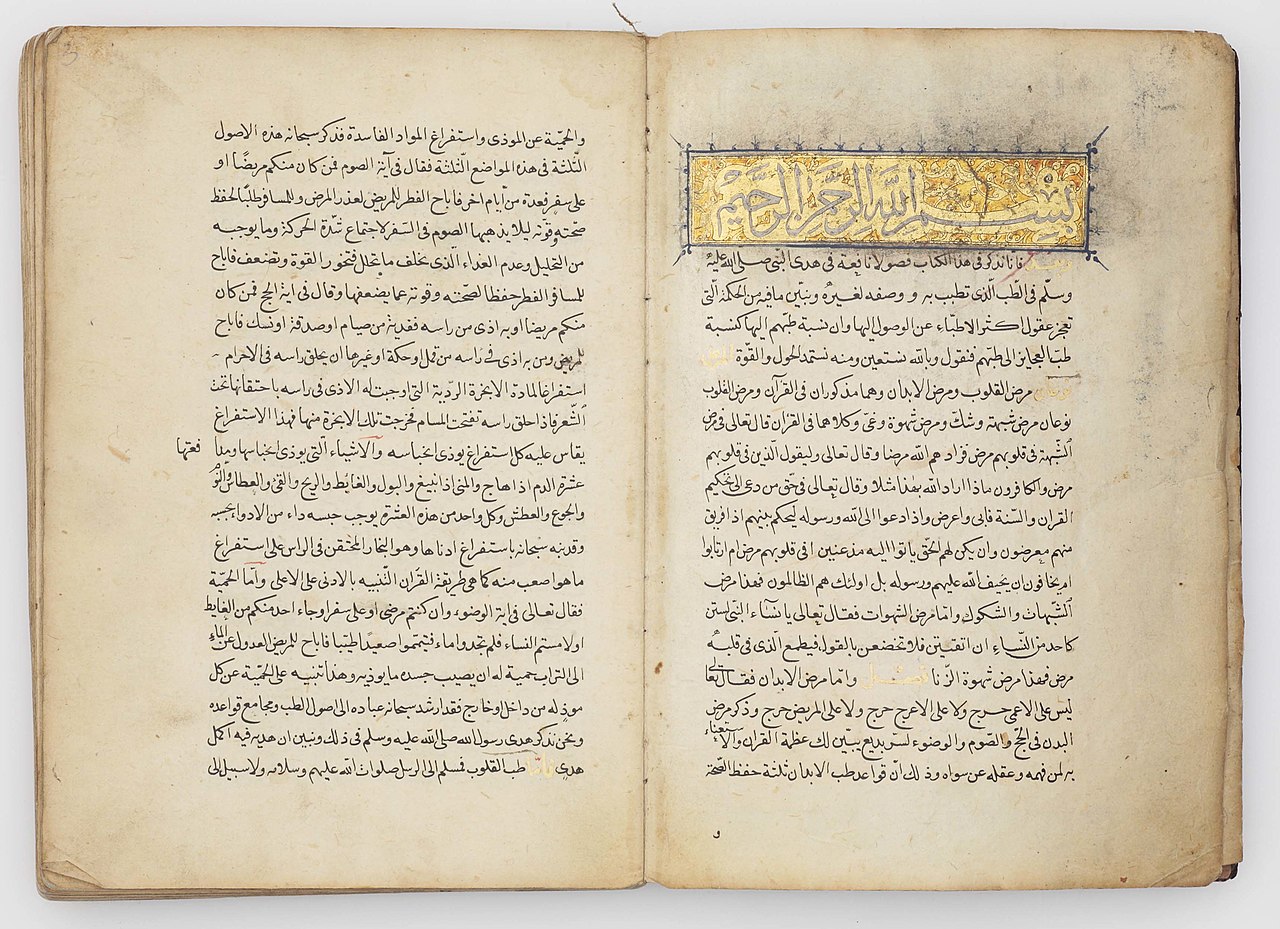 The importance of this text appears due to the mentioned synonyms of the simple medicaments, this point has great value as many substances’ names differed according to either to the variation of geographical area or the different dialects in the Arab World parts, and that was the main reason of authoring this text as the author (Taqī al-Dīn) himself stated (see below), therefore, it looks a valuable and largely unknown text that will be of interest to many historians of medicine. Anyway, only three copies are recorded (until now) over the world of this alphabetical pharmaco-botanical dictionary

To speak about the author of this book Taqī al-Dīn Muḥammad ibn maʿrūf al-Shāmī (known as Taqī al-Dīn), he lived in the 16th century (1526–1585 AD) was better known for his astronomical writings, and was active in Istanbul at the Ottoman court. He was the founder and the director of the Istanbul Observatory and worked in the fields of mathematics, astronomy, optics, and mechanics. He made various astronomical instruments and was the first astronomer to use an automatic–mechanical clock for his astronomical observations. Furthermore, he advanced the arithmetic of decimal fractions and used them in the calculation of astronomical tables. (Hockey et al. 2014, 1122). In this entry in the Biographical Encyclopedia of Astronomers, İhsan Fazlıoğlu provides more details about the biography of Taqī al-Dīn. Fazlıoğlu states that Taqī al-Dīn wrote only one medical book, without giving the title of the work (Ibid, 1123).

The second folio in a copy of a pharmaco-botanical dictionary by a writer better known for his astronomical writings, Taqī al-Dīn Muḥammad ibn Ma‘rūf al-Shamī al-Asadī (d. 1585/993). The title Kitāb Tarjumān al-aṭibbā’ wa-lisān al-alibbā’ fī mufradat al-ṭibb has been added at the top by a later reader. The first folio of this manuscript was apparently damaged and has been replaced by a much more recent copy. (Source: https://www.nlm.nih.gov) – Archived Link

Kaḥḥālah refers to him also as an astronomical observer but without mentioning this book or even discussing if he was a physician or possessed medical knowledge (Kaḥḥālah 1993, 3:727). The same can be said about Al-Ziriklī, who only lists the books by Taqī al-Dīn on astronomy (Al-Ziriklī 2002, 7:105). Previously, Ḥājjī Khalīfah in his encyclopedia Kashf al-Ẓunūn had not mentioned this book either.

However, while al-Baghdādī did not talk about this text in his encyclopedia Iyḍāḥ al-maknūn, he listed the author and the work in his second encyclopedia Hadīyat al-ʿārifīn. Here, al-Baghdādī states that Taqī al-Dīn was a famous physician who authored a book on simple and compound drugs, Tarjumān al-aṭibbāʾ. He referred to him as al-Shāmī (the Syrian/Damascene) without giving more information about his biography (Al-Baghdādī 1951, 2:257).

Taqī al-Dīn starts the dictionary with an explanation of the reason for writing it; he says:

“When I was young, I read medical books and I needed to know some names of simple or compound drugs. Moreover, I found many differences between the books in [their ways of] telling the names, with some mentioning the Arabic names, others the Persian or Greek ones. In addition, there was confusion about the names for the same simple drug, so my soul desired to distinguish these names and clarify the true one of each of them. Therefore, I started, whenever I found a synonym or the correction of a name, writing it down and keeping it in my notebook until I realized that it was time to put all of these into one volume, the purpose of which is not to identify the name but to tell the synonyms. And then I added some medical uses and some alternative drugs, in addition to mentioning some of their weights to be used in therapies.”

However, before starting with the names, Taqī al-Dīn states that he arranges the book alphabetically according to the first and second letters of the name in each entry (in contrast with the common practice in Arabic dictionaries to sort entries by the last root consonant). First listing the names starting with the letter Hamzah/Alif and proceeding until the letter Yāʾ. The system Taqī al-Dīn uses is to give the main name of the drug and its synonyms, adding medical uses only in some entries. In addition, he includes some names of compound drugs.

The first observation is that this lexicon is not meant for identifying the simple drugs like Ibn al-Bayṭār’s (d. 1248 AD) encyclopedia al-Jāmiʿ or other similar books; notably, this lexicon focuses on the synonyms for the names of simple drugs, so it could be considered a glossary of synonyms.

Although the main purpose of this book is to provide the synonyms of simple drugs used in the history of Arabic medicine, occasionally Taqī al-Dīn mentions more details for some of these simples. Three interesting examples will be highlighted:

– When speaking about the Arabian jasmine (Jasminum sambac), Taqī al-Dīn makes an interesting point about the historical diffusion of this species, saying that this kind of rose arrived in the Ottoman lands during his lifetime (i.e., the 16th century), though he does not mention from where it came and who brought it.

– About the Safsaf willow (Salix mucronata), Taqī al-Dīn says that it could be used for bladder stone; where the deceased grand vizier Ḳara Muṣṭafa Pāshā (d. 1583 AD) had always advised people to use this plant for treating bladder stone.

– In the entry on Coriander (Coriandrum sativum), Taqī al-Dīn recounts a personal experience: He had felt severe pain in his left-hand due to a substance flowing from the head. He tried to heal the complaint with hot oils without getting any benefit, until he met the great teacher Saʿdī Bāshā (fl. 1534 AD) who ordered Taqī al-Dīn to add coriander to his diet, in addition to taking one spoonful of that drug daily, and he was cured within one week after the encounter.

It is understandable considering that Taqī al-Dīn was not a practical healer or a physician, but his interest was only reading medical books, as becomes clear from an analysis of the quotations and sources of information Taqī al-Dīn uses. In relation to the huge number of entries, direct citations are generally rare. However, the following points regarding the sources seem relevant:

– Taqī al-Dīn criticizes Ibn Jazlah (d. 1100 AD, the author of the Minhāj al-Bayān) when speaking about the thorny broom (Calicotome spinose). Ibn Jazlah claims that this substance is the root of spikenard (Aralia racemosa). Again, Taqī al-Dīn’s quote from Ibn Jazlah’s book can be confirmed as correct. Moreover, the criticism of Taqī al-Dīn is also justified, because many Arabic sources on simple drugs claim that the thorny broom is not the root of spikenard, even if some people might misidentify it as was the case with Ibn Jazlah.

While the number of quotations in this book is small, Taqī al-Dīn mentions Ibn al-Kutubī (d. 1353 AD) many times. Indeed, Taqī al-Dīn cites a book by Ibn al-Kutubī entitled Mā lā yasaʿu al-tabīb jahluh (What a physician cannot afford to ignore), written as a summary of Ibn al-Bayṭār’s authoritative al-Jāmiʿ. Some quotations contain criticisms of Ibn al-Kutubī, but when compared to Ibn al-Kutubī’s text, it turns out that Taqī al-Dīn’s quotations are sometimes erroneous. However, in some quotations, Taqī al-Dīn discusses information from Ibn al-Kutubī, especially on the issue of synonyms for some alien, imported simples. For instance, Taqī al-Dīn says that Ṭālīsfir denotes the leaves of the Indian olive and that Ibn al-Kutubī denies this. However, it is important to state that this synonym created confusion among authors of books on simple drugs. While al-Majūsī (d. 930 AD) states that the term refers to the leaves of the Indian olive, Ibn Juljul (d. 994 AD) relates it to the European ash (Fraxinus excelsior), while al-Ghāfiqī (d. ca. 1165 AD) identifies it as nutmeg (Myristica fragrans). However, all Arabic sources on simple drugs mention that it is a simple drug imported from India.

Although it seems an interesting book, especially as it gives the synonyms of simple drugs that were used in Arabic medicine, the number of copies of this book is very limited. A search in the catalogues of the main libraries holding Arabic manuscripts worldwide only identified three copies (see below).

To conclude this review, I would say: despite the importance of this book to identifying a wide variety of synonyms of simple medicaments were used in the history of medicine, unfortunately, it is still unedited yet, and this paper might be a call for researchers worldwide to prepare a critical edition of this importance pharmaco-botanical dictionary.