During the Cheltenham Science Festival from 6 - 11 June 2017, a panel on “The Story of Math” took place. Professors Mona Siddiqui, Mohamed El-Gomati, Marcus du Sautoy and Dr Amira Bennison took part in the conversation with Professor Siddiqui opening the panel discussion. Professor Siddiqui is a Professor of Islamic and Interreligious Studies at the University of Edinburgh. Professor Siddiqui explained the importance of why such a panel should take place due to the current political, social and economic climate between the Muslim and non-Muslim populous.

The Cheltenham Science Festival took place between 6 – 11 June 2017, headlining was one panel discussion on “The Story of Math”. Professors Mona Siddiqui, Mohamed El-Gomati, Marcus du Sautoy and Dr Amira Bennison took part in the conversation with Professor Siddiqui opening the panel discussion. Professor Siddiqui is a Professor of Islamic and Interreligious Studies at the University of Edinburgh[1]. Professor Siddiqui explained the importance of why such a panel should take place due to the current political, social and economic climate between the Muslim and non-Muslim populous. Professor Mona Siddiqui concluded that “sharing examples of ‘The Story of Mathematics’ in different Civilisations – including that of Muslim Civilisation –  demonstrates the interconnectivity of cultures.”

Professor Siddiqui’s address was followed by a short statement from by Dr Amira Bennison. Dr Amira Bennison is Deputy-Chair of the Faculty of Oriental Studies at the University of Cambridge[2]. Dr Bennison discussed the daily activities in Baghdad during the Abbasid regime. She touched upon the Bayt al-Hikmah (House of Wisdom) and mentioned the works of Banu Musa and Thabit ibn Qurra who were renowned for their pursuit of knowledge in engineering and mathematics. She further explained how the research culture of that age shaped some of the reasons why it was named “The Golden Age”. Moreover, that well educated individuals would have a good aspect of several disciplines which produced “Renaissance like gentlemen” and educated women. Although women were not written about as much due to what seems to be less preservation of such texts, Dr Bennison highlighted that there clearly were women who accomplished similar feats but perhaps more in literary fields than in science. Additionally, women educators would tend to teach women as male educators would tend to teach men. Women scribes however were renowned in Cordoba. “The importance of education was stressed to all at that time” she concluded, “particularly when it came to basic numeracy and literacy”.

Following Dr Bennison’s talk, Professor Mohamed El-Gomati, OBE, Chairman of the Foundation for Science, Technology and Civilisation UK[3] commenced his presentation. He remarked that in reality the Golden Age stretched between 750 CE – 1600 CE, not just between 950 CE – 1100 CE as it is sometimes alluded. Professor Gomati outlined that some of the factors, which shaped this period included financial and economic stability as well as the influx of migrants to Baghdad. What is more, there did not appear to be any clash between religion and science, in fact that free thinking was promoted. “Migrants were welcomed to Baghdad and paid handsomely – they were given gold in exchange of translations” he outlined. Scholars, such as the Banu Musa amongst others, were said to have developed upon translated knowledge that the Greek, Chinese and Indian civilisations contributed to. In example, Archimedes is said to have proposed mirrors to burn ships, in the late 10th century, Ibn Al-Sahl is believed to have attempted to explore this claim and in doing so developed the law of refraction, which we refer to today as Snell’s law. Similar to this, in the early 11th century Ibn al-Haytham explored optic contributions made by Greek and earlier scholars. Professor El-Gomati stated how “the scholars would do this for the good of all”. This is in contrast to how centres of learning now function. In example, at present, commercialisation and patenting of ideas and inventions is often expected. This appears to have converted Universities interest more on businesses instead of being purely places of knowledge sharing.

Additional reasons underlying why Professor El-Gomati believes the sciences flourished include physics and maths being intertwined and the fact that people did not see the “boundaries” that are placed on or classify sciences today. For example, in the 1600s CE all sciences were referred to as “natural philosophy”. What is interesting to note here is that it was Ibn al-Haytham who was the first to ‘mathematicise’ science, starting such a trend in his work in Physics. Another scholar, Al-Khwarizimi combined both abstract and applications in his treatment of mathematics. For example, Algebra, from al-jabr, is similar to a math formula composition. Jabir ibn Hayyan was said to compose chemical formulas without providing a detailed textual explanation, hence some of his works being referred to as “jibberish” or “gibberish” by those who could not follow his analysis; a word commonly used today to describe things one is unable to understand or make sense of. During the Questions and Answer session, one member of the audience asked about the role of women during Muslim Civilisation, Professor El-Gomati mentioned the Health and Safety officer, Al-Shifa bint Abdullah in the 7th century, astrolabe maker Maryam al-Astrulabi who worked in the court of Sayf al-Dawla during the 10th century. Other famous women of science included Fatima al-Fihriyya, a woman who is said to have established the Qarawiyyin Mosque School Complex in 854 CE that became the first university in the world and which still operates to date.  Moreover, many of the books written paid homage to women, Professor El-Gomati highlighted. 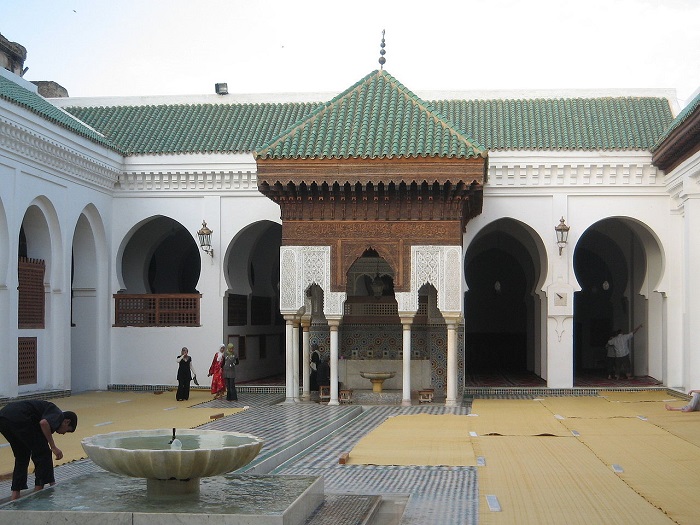 The concluding talk was delivered by Professor Marcus du Sautoy, FRS, OBE. Professor Du Sautoy is the Charles Simonyi Professor for the Public Understanding of Science at the Oxford University, a chair he holds jointly at the Department of Continuing Education and the Mathematical Institute[4]. Professor Du Sautoy believes that the story of maths began with taxation in Ancient Egypt and Ancient Babylon. He holds that as the Ancient Egyptians and Ancient Babylonians built up their lands, they also began taxing them with concepts such as “pi” originating from places like the River Nile as things had to be taxed outside of the circle. His BBC television series, “The Story of Maths”, further explored this topic by revisiting Ancient Greek, Egypt, Babylonian times etc. One thing that struck Professor Du Sautoy was the gap in history such as the mathematics which originated from the East, namely that of the Muslim, Chinese and Indian contribution. He explained how trade routes took these ideas from one place to another and eventually winded up in Europe. For example, numerals which Professor Du Sautoy clarified were not just Arabic numerals, but rather Indian-Arabic numerals. “The creation of the number zero originated from Indian culture but Arabs picked it up as they derived from a culture which was not scared of the cosmos, the infinite etc.” Professor Du Sautoy remarked. He continued to mention how the Babylonians developed a “cryptic crossword” like language of math but scholars such as Al-Khwarizmi from Muslim Civilisation helped understand it. He finished with, “We should celebrate the stories of math which helps make math more interesting and brings them to life. We should breakdown the boundaries of science as science is interconnected. A new language through graphics and images has emerged which has changed our ways of thinking. The elite during Fibonacci’s time worried of societal progress e.g. the working class in Florence learning math, when maths and science are taught in a fluid way, their tools can empower others.”

You may view the full proceedings of the session at: https://www.youtube.com/watch?v=O0r4egTtNAg

[1] She is also Assistant Principal Religion and Society, Dean International and the Middle East at the University.

[2] She is also a Senior Lecturer in Middle Eastern and Islamic Studies.

[3] He became a Professor of Electronics at York, in 1997. His interests extend to history of physics with particular emphasis on history of optics within Muslim civilisation.