The author of one of the earliest surgical books was Serafeddin Sabuncuoglu. In 1465, he wrote a surgical book in Turkish which contained not only pictures or miniatures of paediatric surgical procedures, but there were also many important and major new contributions to the surgical literature.

The author of one of the earliest surgical books was Serafeddin Sabuncuoglu, who was born in one of the ancient cities of Central Anatolia. In 1465, he wrote a surgical book in Turkish. The aim of this study was to investigate the details of this book and compare it with the old classics. It was observed that the book of Sabuncuoglu not only contained pictures or miniatures of paediatric surgical procedures, but that there were many important and major new contributions to the surgical literature originally described by Sabuncuoglu himself. He based his contributions and techniques on previously designed and described procedures, moreover, developing and nourishing the culture of paediatric surgery in that era. Thus an extraordinary combination of Greek, Roman, Arabic, and Turkish paediatric surgery influenced the development of European paediatric surgery.

Despite the rapid growth and dissemination of paediatric surgical knowledge, the historical aspect of paediatric surgery has still not been systematically explored. The author of one of the earliest surgical textbooks was Serafeddin Sabuncuoglu, who was born in Amasya in the Northern part of Central Anatolia and practiced in an Amasya hospital for 14 years. In 1465, he wrote his original textbook. Cerrahiye-i Ilhaniye, in Turkish, describing surgical techniques, incisions and instruments. This book also contained many miniature drawings concerning the operative procedures. Some parts of this textbook include theoretical and practical points about paediatric surgery.[1]

In 1983, during the meeting of the Greek Association of Paediatric Surgeons in Chios, Montagnani of Rome it was declared that Sabuncuoglu had only made a faithful translation of Abû Kâsim Al-Zahravî’s[2] (Albucasis) Textbook of Surgery, the only additions being the miniatures designed by the surgical techniques.[3] In earlier times, there had been only two or three sources as reference books on surgery. Abû Kâsim Al-Zahravî’s book was one of these source books.[4] Even minor additions to such a book were an important step for surgical literature. To investigate the differences and original aspects of Sabuncuoglu’s textbook, we explored it and compared it with Zahravî’s original text and translation of ancient surgical textbooks.

There are three original, handwritten copies of Sabuncuoglu’s book. Two of these copies are in Istanbul, in the Istanbul National Library of Fatih and Capa Medical History Department of Istanbul University. The third is in the Paris National Library.[5] Cerrahiye-i Ilhaniye comprises four major parts: Cauterisation Techniques: General Surgery including Paediatric and Plastic Surgery; Orthopaedics; and Medical Preparations innovated by Sabuncuoglu.” The three different manuscripts of the book were translated into the modern Turkish language and compared with Zahravî’s textbook and other ancient surgical textbooks. Sabuncuoglu’s special contributions and original remarks were investigated.

The surgical modifications, special contributions, and original remarks of Sabuncuoglu were as follows.

On the Cure of Hydrocephalus (Chapter 2)

Sabuncuoglu’s instruments for incision and operation are modified forms of Zahravî’s and ancient physicians’ instruments. The scalpel he illustrates (Fig 1) for the incision is wider and has a sharp, pointed end. Instead of a cross-type incision, he used a special type (reversed T) incision just as Zahravî did.

Sabuncuoglu was one of the earliest surgeons to use different drainage techniques and materials for neurosurgical procedures in paediatric cases. He stressed the danger of haemorrhage during neurosurgical operations and believed that contact of cerebrospinal fluid and blood was associated with a fatal outcome.

On the Incising of Ligament “Ribat” Below the Tongue. Which is an Impediment to Speech (Short Fraenulum) (Chapter 34)

Sabuncuoglu uses the same term “Ribat’ as Zahravî to describe short fraenulum. He used a special lenticular cautery called “adesi daglagu” (Fig 2). He advocated a long postoperative drainage period for the prevention of haematoma and infection.

In treatment of imperforate urinary meatus, a fine scalpel called a “mibza” was used (Fig 3). It differed from Zahravî’s scalpel in that it was straighter. Sabuncuoglu used a tin sound with an intact lumen in paediatric urologic procedures in the postoperative period. Galen and Zahravî used leaden sounds with obliterated lumen.[6] However, Sabuncuoglu recommended a different method, which was to use a sound with a canal in it (like a tube) so that the patient can urinate through it. In the treatment of urethral stenosis, Sabuncuoglu used a solid tin dilating tube and removed the tube after the dilating procedure.

In Sabuncuoglu’s manuscript, the description and classification of hypospadias was more informative. In particular, the localization of urethral meatus was described in detail.

Sabuncuoglu describes the use of bent scissors rather than the straight ones of Zahravî. He advises circumcision of the preputium by a single cut. For the correction of erroneous circumcisions performed by unqualified people practicing surgery, different repair methods are described by Sabuncuoglu.

On the Treatment of Hermaphroditism (Chapter 70)

Centuries earlier, Paulus of Aegina and Zahravî had already described genital ambiguities but Sabuncuoglu made a detailed description and classification of the subject. He commented on the appearance of the perineal region and clitoris.

On the Treatment of Unperformed Female Pudenda (Chapter 72)

Sabuncuoglu was the first to describe the classical position for gynaecologic examination. During manual division of the synechia between the two labiae, he covered the thumbs with special gauze to make the manipulation easy and not hurt the child. He recommended an oiled vaginal tampon for prevention of adhesions and recurrence. Paulus of Aegina provided the source for this anomaly. Celsus and Soraneus recommended using forceps and specula for this examination. For these types of procedures, Sabuncuoglu mentioned the importance of female physicians rather than the midwives favoured by Zahravî. Sabuncuoglu illustrated a “tabîbe” female physician operating on a patient.

Sabuncuoglu studied this subject under the title “yarligan” and “yincilmek” and used the special terms “artuk parmak” and “bitevi parmak.” In the treatment of a superfluous finger arising at the root of a finger, Sabuncuoglu advised a twisting manoeuvre for amputation (a special technique). After the division of webbed fingers, special gauze soaked in rose oil was put between the fingers to prevent adhesions and recurrence. Sabuncuoglu was the first to advise placing a wooden splint under the palmer side after hand surgery for immobilization to enhance wound healing.

On the Treatment of Intestinal Hernia (Chapter 65)

Sabuncuoglu commented that hernias could be bilateral. He also gave a detailed description of the aetiology, classification, and clinical types of inguinal hernias. He described a special drainage procedure for the scrotal pouch and a cauterisation technique for the drainage incision.

In high anorectal atresia, Sabuncuoglu stressed intervention by a master surgeon rather than an inexperienced midwife to decrease the risks related with the levator muscle complex. Zahravî and Paul of Aegina described this anomaly and gave some details of the procedure.

It was observed that the book of Serafeddin Sabuncuoglu, as described by others,[7] [8]contains not only pictures or miniatures of surgical and paediatric surgical procedures but also many important and major new contributions to the surgical literature first described by Sabuncuoglu himself.[9] This historic book could also be accepted as the first paediatric surgical atlas. Its colourful, descriptive pictures of various operations and surgical instruments make it a significant piece of work. This important textbook combines knowledge of Greek. Roman. Arabic, and Turkish surgery and nourishes the basic concepts with Sabuncuoglu’s original contributions on surgical procedures, postoperative care, and surgical instruments. Thus Greek, Roman, Arabic, and Turkish surgery combined extraordinarily and influenced the development of European surgery. 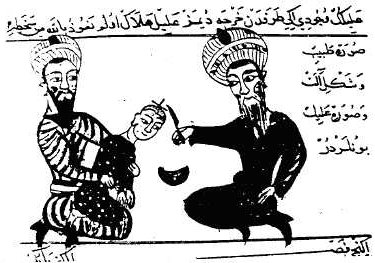 Fig 1. Incision and evacuation of hydrocephalus. Note the reversed T-type incision and wide and sharp pointed scalpel (no. 79, f. 48b; reprinted with permission from the Fatih National Library, Istanbul, Turkey). 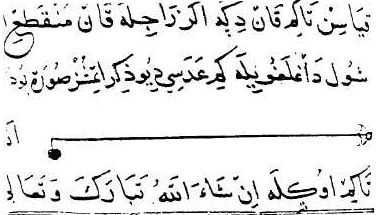 Fig 2. Special lenticular cautery for the treatment of short frenulum (f. 72a; reprinted with permission from the Fatih National Library, Istanbul, Turkey). 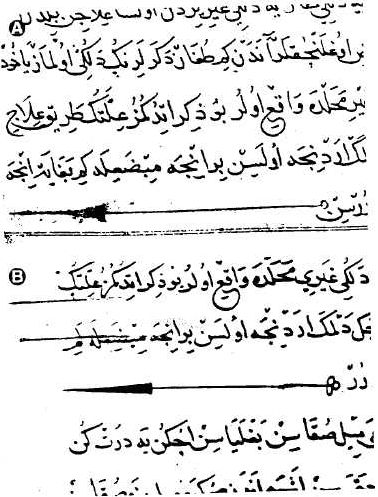 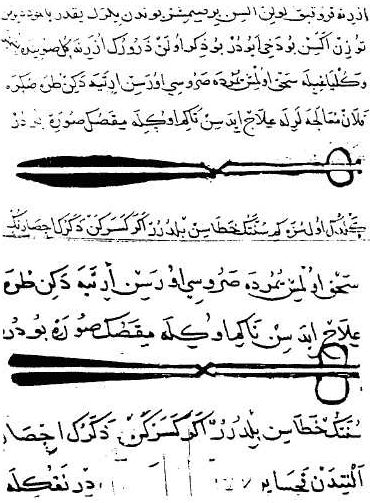 * From the Departments of Paediatric Surgery and History of Medicine. Cerrahpasa Medical Faculty. University of Istanbul. Istanbul. Turkey.