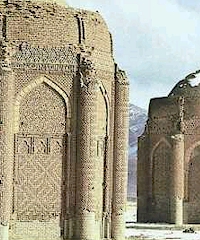 Under the Seljuk patronage the mausoleum saw considerable development. This type of building evolved from early funerary monuments which were first erected to honour the Umayyad rulers in the 8th century. However, under the Seljuks it took a new dimension hosting the remains of important people not only rulers but also religious scholars. Their spread was particularly due to the expansion of Sufism which was widely practised in Persia as well as Anatolia and Asia Minor. Seljuk mausoleums display great diversity of forms involving the octagonal, cylindrical (also called tower) and square shapes topped with a dome (mainly Persia) or conical roof (especially in Anatolia). These monuments can be found freestanding in cemeteries, or attached to particular buildings connected with the deceased such as mosques or Madrassas. Here, architecture reached its highest refinement and beauty. Due to the religious, social or political importance of the people buried in these tombs, the mausoleums were often highly decorated with symbolic designs depicting paradise awaiting the soul of the founder, and large amount of calligraphic inscriptions from the Quran connected with death and paradise, and sometimes the good works and the guided life of the deceased were also expressed.

In central Asia and Persia, the earliest Seljuk tombs were cylindrical or tower type which seems to be derived from earlier tower tombs of the area especially the celebrated Gunbad-i-Qabus at Gurgan, Iran (1007). This monument was built for Shams Al-Maali Qabus (978-1012), consisting of a cylinder supported by 10 buttresses planned by rotating a square five times within the circle (Hoag, 1987, p.92), and had a conical roof (figure 12).

Such features appeared also in Tughril tomb at Rayy, (1139-1140 near Tahran) with the latter having more muqarnas decoration and more impressive Pishtag doorway. As for the square mausoleums, historians established that the Seljuks derived this type from existing examples especially the tomb of Ismail, the Samanid ruler at Bukhara. This was built, according to an inscription found before 943 with a square plan supported by semi circular buttresses at corners and a domed roof with dog teeth décor and four small projections (dome lets) were planted at the corners of the roof (figure 13). However, the tomb is famous for its brick decoration which exceeded in quality and richness those found in the Abbasid Baghdad Gate at Raqqa (775) and the Great Mosque of Samarra. Examples derived from this tomb include the Gunbad-i-Surkh (1147-1148) at Maragha (west Persia) which developed similar square plan, semi-circular corner buttresses and domed roof as well as the tomb of Sultan Sanjar at Merv (around 1157).

Octagonal and cylindrical shapes topped with conical roof were the most popular in Anatolia. Among the examples in Anatolia is the decagonal mausoleum of Kilic Arslan II which was built in the centre of the courtyard of Ala al-Din mosque in Konya between 1192/1193. The other famous octagonal mausoleum with twelve sides is the Doner Kumbet tomb built for Princess Shah Jihan Khatun around 1275. It consists of two storeys, the lower floor is the burial space while the upper floor is a prayer room. The most important feature of the building is its baroque style ornaments which decorate the exterior of the first floor. An example of the square tombs “turbe” in Turkish, is the Mahperi Khwand Khatun built at the complex “Kulliye” she founded in 1238 at Kayseri.