The Tinmal mosque was built by the first Almohad caliph, ʿAbd al-Muʾmin, around 1148 next to the tomb of the mahdī Ibn Tūmart, the founder of the Almohad creed (d. 1130). The official pilgrimages (ziyāra) to Tinmal became important ideological actions of the Almohad caliphs. The religious significance and the unique architectural features of the Tinmal mosque (like the minaret’s location) but also common features with other Almohad mosques (like the orientation of the qibla) can be best explained as related with the Almohad doctrine or ʿaqīda, based on a return to the Prophet’s model and to the origins of Islam. It is in this sense that the mosque and the tomb were used to legitimatize the Almohad caliphate as a new Hijaz. Two holy copies of the Qurʾan, one renowned as an ʿUthmān’s muṣḥaf and another one of Ibn Tūmart, were relics preserved somewhere inside the mosque of Tinmal. 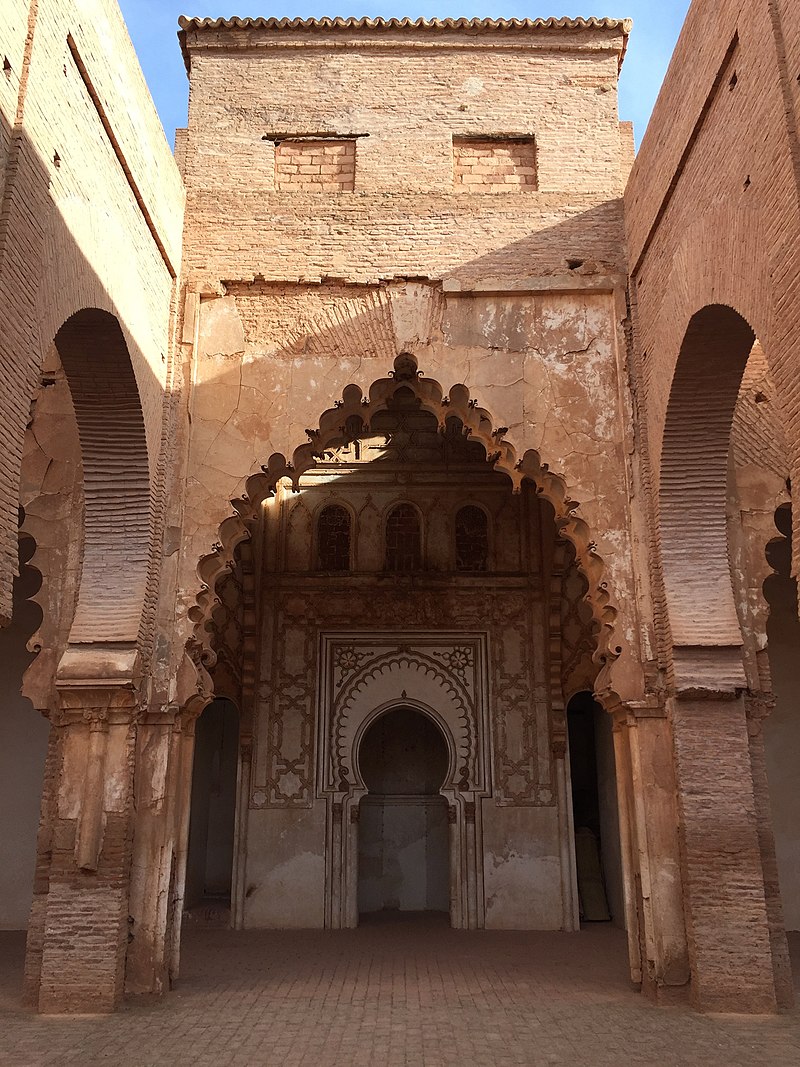 Interior of the mosque (Source)

The mosque of Tinmal shares many characteristics with the family of Almohad mosques, such as the qibla’s orientation to the south, the muqarnas domes, the decoration, as well as the wide central aisle in the axis of the qibla. But this monument shows also formal and functional features that distinguish it from others. Particularly interesting are the perfect measurements and proportions of the building, the positioning of the minaret above the mihrab, or the fact that it was an important centre for pilgrimage associated with the tomb of the founder of the Almohad movement. Hence, although it is obvious that the main reference for the Almohads was the art of the Umayyad caliphs of Cordoba, their mosques did include novel formal elements. This is why, to the Umayyad political legacy, which they claimed as part of their legitimisation process as caliphs of the Maghreb and al-Andalus, we should add the Almohad main ideological and religious principles, their doctrine or ʿaqida. More specifically, this paper will mainly be focused on the following aspects: the motivation behind the pilgrimage, the architectural features, as well as the minaret and its relics.

The need to return Islam to the purity, austerity and virtues of Mohammed’s time was used as a justification for the new Unitarian dogma ‘revealed’ by Ibn Tūmart, the mahdī or messiah. Accordingly, Ibn Tūmart’s moral reform was based on a return to the Prophet’s model, with the Qurʾan and the Sunna as the only sources for moral inspiration and law. His dogma was founded on the tawḥīd or the divine uniqueness and unity, which gave its name to its followers, al-muwaḥḥidūn or the Unitarians. As studied by Fletcher and Fromherz, Ibn Tūmart’s teaching assigns an important role to reason in theology, so that reason becomes a source of religious doctrine along with the Qurʾan and the hadith.

Ibn Khaldūn (1332–1406) says that Muhammad Ibn Tūmart (died ca. 1130), a Berber from the Atlas Mountains, was born “into a family of remarkable piety” and was very eager to learn; he read the Qurʾan, visited the mosques and, before setting off for the East, spent some time in Cordoba, one of the great centres of learning. He set sail for Alexandria and, from there, undertook the pilgrimage to Mecca. He later travelled to Baghdad, where he acquired a high level of knowledge from the best wise men and became familiar with the teachings of al-Ghazzālī. In 1121–22, on his return from Mecca, Ibn Tūmart retreated to the Atlas Mountains, first to his birthplace of Ījīlīz, and later to Tinmal, which became the Almohad capital until the conquest of Marrakesh in 1147. 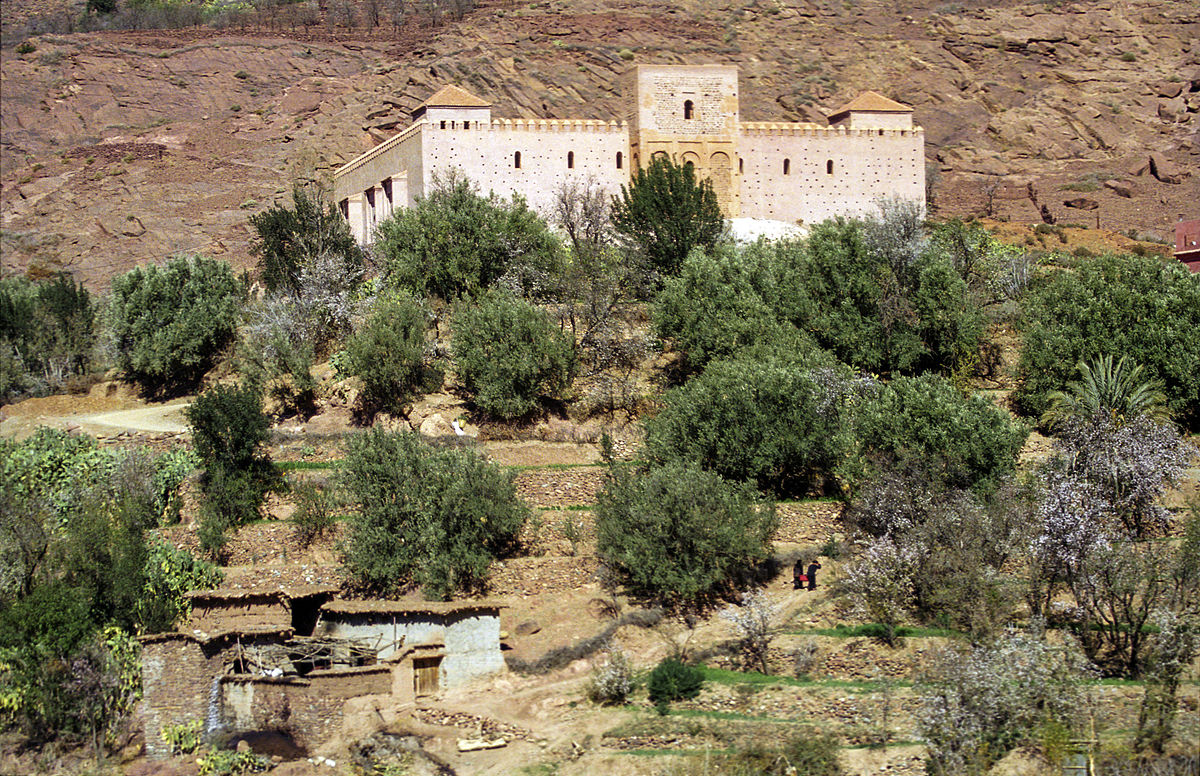 In order to carry out his task of restoring the world to righteousness, Ibn Tūmart proclaimed himself imām maʿṣūm (impeccable imam) and mahdī, meaning Messiah or guide sent by God. As M. Fierro’s studies show, the idea of an imamate, or messianic leader who would head the Muslim community, stemmed from the prophetic model and the first caliphate.4 Almohad Mahdism portrayed itself as the end of the ancient era and the start of the new, by returning to the text revealed to the Prophet and to the origins of Islam. ʿAbd al-Muʾmin and his successors built the Almohad Empire on these ideological pillars.

In their writings, chroniclers and ideologues of the Almohad movement laid down clear analogies between the mahdī Ibn Tūmart and the prophet Muhammad, thus exalting the proclaimed return to the prophet’s original teaching. In al-Baydaq’s Memories, a rich source for information on the history of the beginnings of the Almohad movement, this parallel is clearly shown according to Bombrun. Al-Baydaq, who was close to ʿAbd al-Muʾmin and therefore well-informed, explained how the return to Islam’s roots was achieved. To this end, al-Aydaq makes constant associations between the figure of the mahdī and the prophet Muhammad, as well as between ʿAbd al-Muʾmin, his successor and first Almohad caliph, and the Rightly Guided Caliphs (rāshidūn). He also draws links between the actions of the Almohads and the ‘founding acts’ of Islam, such as between the hijra and Ibn Tūmart’s journey from Marrakesh to Ījīlīz and on to Tinmal; between the prophet’s proclamation and that of Ibn Tūmart as Messiah in Tinmal, with the oath of loyalty from their followers; between the preaching of both; between the unification of the tribes and constitution of the umma (community of believers); or between their death and the veneration-peregrination (ziyāra) to their tomb. These analogies are also seen in the systematic use of the taṣliya and other religious prayers dedicated to the Prophet; and in the hagiographies of the mahdī, which closely follow the model of the Life of the Prophet (sīra). In this reasoning, and this is important, Tinmal often appears as a new Mecca or, better, a new Medina (Madīnat al-Nabī)

His successors thought of themselves as continuing Ibn Tūmart’s mission, but at the same time, they had to justify the full adoption of the caliphal title (commander of the believers, amīr al-muʾminīn) and ensure that it became a dynastic title. ʿAbd al-Muʾmin acceded to power two years after the mahdī’s death in 1132, a fact which, for some researchers, certainly shows the difficulties he faced in succeeding Ibn Tūmart as head of the Unitarian movement... 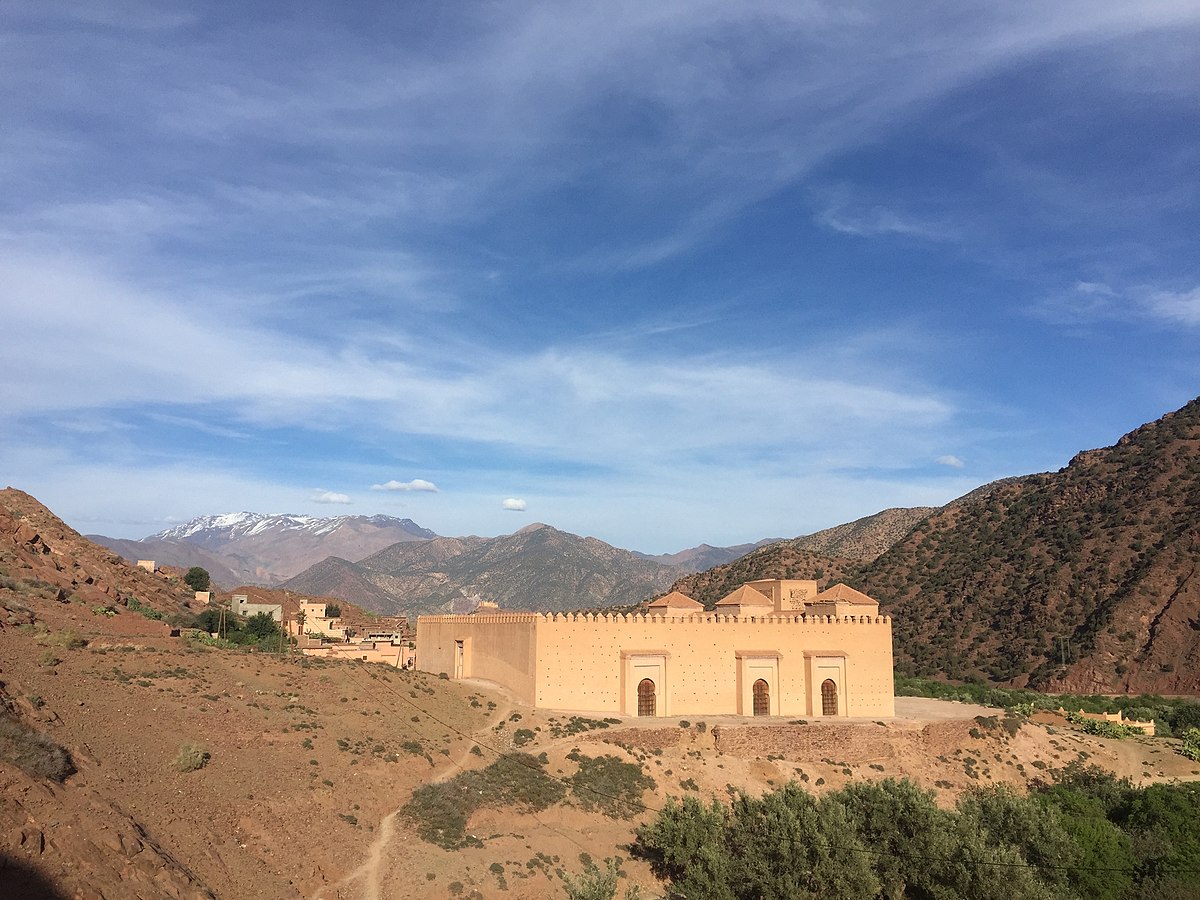 View of the mosque’s exterior, seen from the northwest (Source)