On December 12, 2011, The heritage of science in Arabic poetry was celebrated by FSTC and 1001 Inventions in Abu Dhabi in a special event under the general theme of Poetry and Science in Islamic Civilization. The poems of medieval Islamic physicians and scientists were presented.

It is known that poetry was a fundamental tool of creation in the classical Arab culture before and after Islam. In poetry, Arabs expressed all aspects of their lives and mirrored their emotions, ideas and ethics. After the advent of Islam, poetry reflected the new faith and its effect on the hearts and senses of the Arab people. The British organization that is devoted to promoting Muslim Heritage on all fronts, The Foundation for Science Technology and Civilization (FSTC) turned recently its attention to the Arabic poems with scientific content in the context of the festivities of the exhibition “1001 Inventions” which was opened in Abu Dhabi (UAE) on November 18th, 2011 (Figure 1). The exhibition is a bilingual version (Arabic- English) of the flagship projects of FSTC, the famous touring exhibition “1001 Inventions”. On the evening of Thursday December 22nd 2011, FSTC organized an event under the general theme of Poetry and Science in Islamic Civilization (Figure 2). On this well attended unique occasion, the poems of medieval Islamic physicians and scientists were presented. 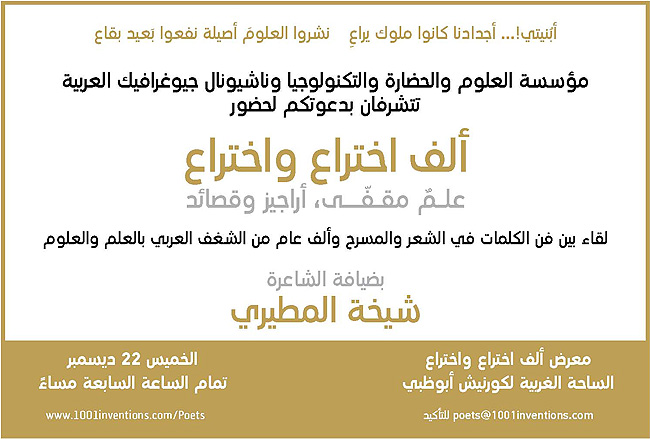 The Flyer for the Science and Poetry event of the exhibition.

Their originality was highlighted and their content was brought again to life in the form of theatrical plays that were performed by Emirati youth. The actors began by the scientific poems of the prince of physicians Ibn sina (980-1037), then the poem of the Andalusian scholar Umayya b. abi al-Salt (11th century) and the famous Moroccan mathematician of Marrakesh Ibn al-Yasamin (d. 1204) and finally the Lion of Seas Ibn Majid (1421-1509). 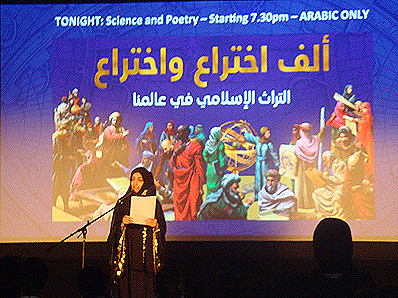 Sheikha Al Mutairy giving the opening speech of the Science and Poetry event.

This wonderful evening turned out to be a great celebration in which heritage, science and poetry intermingled. The Emirati poet Sheikha al-Matiri, a young up and coming poet, was the master of ceremonies for the evening (Figure 3).

In this Abu Dhabi poetry night, “1001 Inventions” and FSTC unveiled one thousand years old poetry on science from Muslim Civilisation. The evening event, presented by the Emirati young poet Sheikha al-Matiri and organised for students and adults only, was held at the “1001 Inventions” exhibition at the Abu Dhabi Corniche (Gate 12) from 7pm till 9pm on 22nd December 2011. 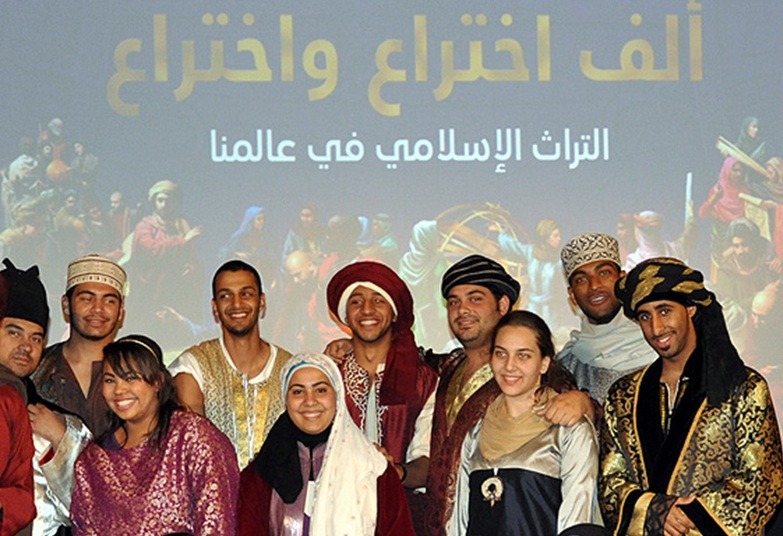 View of the team of performers who participated in the event “Science and Poetry” in Abu Dhabi. (Source).

See the announcement of this event on http://www.1001inventions.com/poets.

Organised in association with: 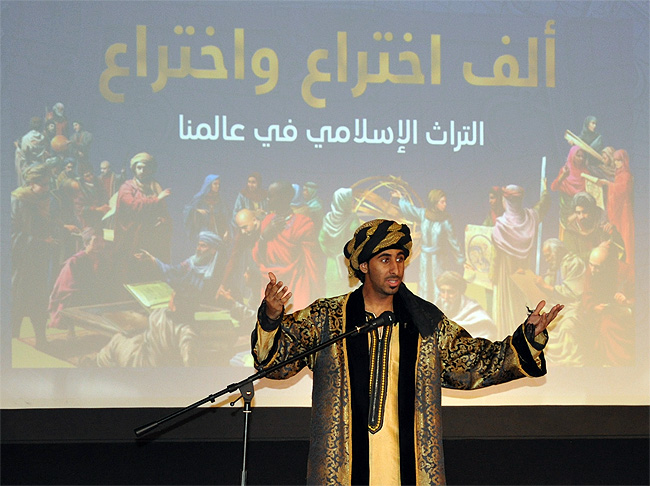 One of the performers who participated in the event “Science and Poetry” in Abu Dhabi. (Source).

Ibn Sina (Avicenna) (980-1037) is one of the foremost philosophers of the golden age of Islamic tradition that also includes al-Farabi and Ibn Rushd. He is also known as al-Sheikh al-Rais (Leader among the wise men) a title that was given to him by his students. His philosophical works were one of the main targets of al-Ghazali’s attack on philosophical influences in Islam. In the west he is also known as the “Prince of Physicians” for his famous medical text Al-Qanun fi al-tib (The Canon in Medicine). In Latin translations, his works influenced many Christian philosophers, most notably Thomas Aquinas.

Abu Muhammed Abdallah ibn Mohammed ibn Hajjaj a-Adrini (died 1204) was a Moroccan mathematician. His place of birth is unknown, but he received his education in Sevilla, Spain.

His most important work is Talqih al-afkar bi-rushum huruf al-ghubar (Fertilization of Thoughts with the Help of Dust Letters (Hindu Numerals)). It is a book of two hundred folios about (among other things) the science of calculation and geometry. He also wrote three poems (urjuza), one on algebra, one on irrational quadratic numbers and one on the method of false position.

View of the team of performers who participated in the event “Science and Poetry” in Abu Dhabi. (Source).

Ahmad ibn Mājid was an Arab navigator and cartographer born in 1421 in Julphar, which is now Ras al-Khaymah in the United Arab Emirates. He was raised with a family famous for seafaring. It is said that he was able to navigate ships at the age of 17. He was so famous that he was known as the first Arab seaman. The exact date is not known, but ibn Majid probably died in 1500. He became famous in the West as the navigator who has been associated with helping Vasco da Gama find his way from Africa to India. He was the author of nearly forty works of poetry and prose.

His most important work was Kitab al-Fawa’id fi Usul ‘Ilm al-Bahr wa ‘l-Qawa’id (Book of Useful Information on the Principles and Rules of Navigation), written in 1490. It is a navigation encyclopaedia, describing the history and basic principles of navigation, lunar mansions, rhomb lines, the difference between coastal and open-sea sailing, the locations of ports from East Africa to Indonesia, star positions, accounts of the monsoon and other seasonal winds, typhoons and other topics for professional navigators. He drew from his own experience and that of his father, also a famous navigator, and the lore of generations of Indian Ocean sailors. He grew very famous and was fondly called Shihab al-Din (The Shooting Star) for his fearlessness, strength and experience as a sailor who excelled in the art of navigation.

Abu al-Salt, Umayya ibn ‘Abd al-‘Azīz ibn Abī al-Salt al-Dānī al-Andalusī, known in Latin as Albuzale (born in Denia, Muslim Spain, circa 1068 and died in Bejaïa, Algeria, on 23 October 1134), was an accomplished, though not innovative, astronomer whose most important works dealt with instruments. These were read both in the Islamic world and in Europe. He may further be considered a polymath, having also written works in medicine, philosophy, music, history, and literature.

Abū al-Salt’s most important works on astronomy are: (1) Risāla fī al-‘amal bi-‘l-asturlāb (On the construction and use of the astrolabe); (2) Sifat ‘amal safīha jāmi’a taqawwama bi-hā jamī’ al-kawākib al-sab’a (Description of the construction and Use of a Single Plate with which the totality of the motions of the seven planets can be calculated). In this work, he describes the last, and least interesting, of the three known Andalusian equatoria, which may have been the link with the eastern Islamic instruments of this kind; however, it does seem that Abū Ja’far al-Khāzin had already described an equatorium in 10th-century Khurāsān; (3) Kitāb al-wajīz fī ‘ilm al-hay’a (Brief treatise on cosmology); (4) a compendium of astronomy that was strongly criticized by Abū ‘Abd Allāh of Aleppo, one of the most important astronomers of the court of al-Afdal; (5) Ajwiba ‘an masā’il su’ila ‘anha fa-ajāba or Ajwiba ‘an masā’il fī al-kawn wa-‘l-tabī’a wa-‘l-hisāb (Solution to the questions posed, or answer to questions on cosmology, physics, and arithmetic); and, according to Ibn Khaldūn, an Ikhtisār (Summary) of Ptolemy’s Almagest.