The idea behind hospitals in the Muslim world a thousand years ago was to provide a range of facilities from treatments to convalescence, asylum, and retirement homes. They looked after all kinds of people, rich and poor because Muslims are honour-bound to provide treatment for the sick, whoever they may be. Figure 1. Great Mosque and Hospital of Divriği, Located in modern-day Turkey, the 13th-century Divrigi Hospital was  uilt alongside a mosque, and the two are a UNESCO World Heritage site. (Source). Original Photo by Umut Özdemir (Source)

Editorial Note: This short article is extracted from the book “1001 Inventions: The Enduring Legacy of Muslim Civilization Reference (4th Edition) Annotated”, published in 2018. There are related articles such as Music therapy and mental health, Four medieval hospitals from Syria and Islamic roots of the hospital. The present article was first published in 1001 Inventions website. 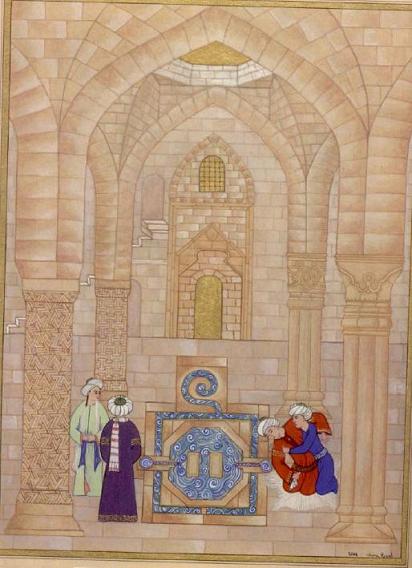 The idea behind hospitals in the Muslim world a thousand years ago was to provide a range of facilities from treatments to convalescence, asylum, and retirement homes. They looked after all kinds of people, rich and poor, because Muslims are honour-bound to provide treatment for the sick, whoever they may be.

These hospitals were funded by charitable religious endowments, called waqf, though money from the state coffers was also used for the maintenance of some hospitals. It was partly due to this funding that they quickly became strong scientiﬁc institutions and an integral part of city life.[1]

Before the Muslims, the Greeks had temples of healing. In these, health care was based more on the idea of a miraculous cure rather than on scientiﬁc analysis and practice. A Greek Byzantine charitable institution, the xenodocheion (literally travellers’ hostel or inn), came closest to being a hospital where care was given to the lepers, invalids, and the poor. Although we have insufficient information on early hospitals in Ancient Egypt, Mesopotamia, China, Persia, and India, it will not be surprising if we discover that patients in these cultures received some form of formal treatment in dedicated parts of buildings. 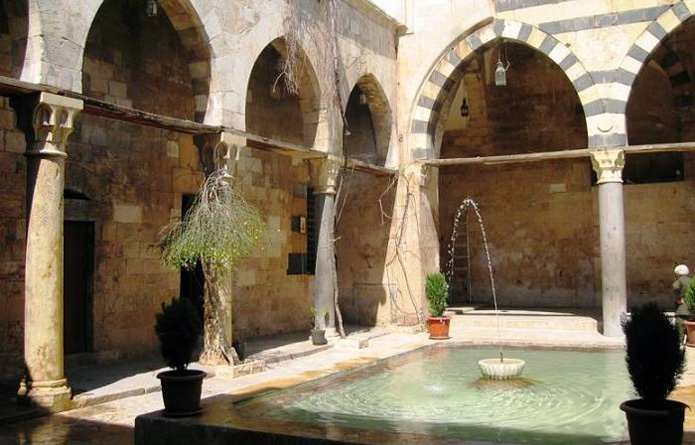 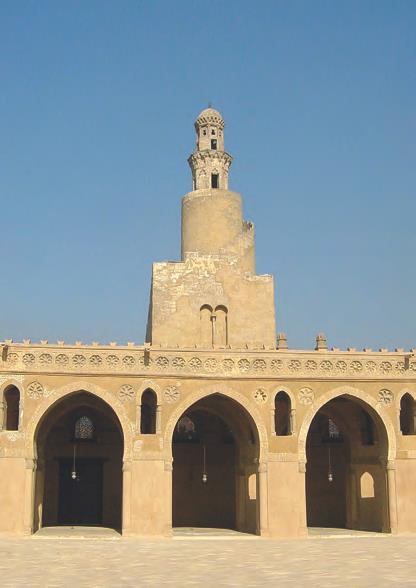 Possibly the earliest hospital in Islam was a mobile dispensary following the Islamic armies, dating from the time of the Prophet, a tradition that lasted throughout the centuries of Islamic glory.[2] But the ﬁrst organised hospital was built in Cairo between 872 and 874.

The Ahmad ibn Tulun Hospital treated and gave medicine to all patients free of charge. With two bathhouses, one for men and one for women, a rich library, and a psychiatric wing, it was quite an advanced institution.[3] Patients deposited their street clothes and their valuables with the hospital authorities for safekeeping before donning special ward clothes and being assigned to their beds.[4]

Other important hospitals included a large Baghdadi Hospital, built in 982, with a staff of 24 physicians. Twelfth-century Damascus had an even larger hospital, the Nuri Hospital.[5]

Here, medical instruction was given and druggists, barbers, and orthopaedists, as well as oculists and physicians, were, according to manuals composed in the 13th century, examined by “market inspectors” on the basis of some set texts.

These hospitals dealt with other ailments, not just the body. A ninth-century Baghdad hospital, where the medical scholar Al-Razi worked, had a ward exclusively for the mentally ill. From these early institutions, hospitals spread all over the Muslim world, reaching Andalusia in Spain, Sicily, and North Africa.

The ninth-century Al-Qayrawan hospital was a state-of-the-art institute, with well-organised halls including waiting rooms for visitors, female nurses from Sudan, a mosque for patients to pray and study, regular physicians and teams of Fuqaha al-Badan, a group of scholars who practised medicine and whose medical services included bloodletting, bone setting, and cauterisation. It also had a special ward for lepers called Dar al-Judhama, built near the Al-Qayrawan hospital, at a time when elsewhere leprosy was deemed an untreatable sign of evil. It was ﬁnanced by the state treasury, and by other people who gave generously to boost hospital income so that the best care could be provided.[6] By the 13th century, Cairo had three hospitals; the most famous was the Al-Mansuri Hospital.[7] When the 13th-century Mamluk ruler of Egypt, Al-Mansur Qalawun (sultan 1279-1290), was still a prince, he fell ill with renal colic during a military expedition in Syria. The treatment he received in the Nuri Hospital of Damascus was so good that he vowed to found a similar institution as soon as he ascended to the throne. True to his word, he built the Al-Mansuri Hospital of Cairo and said,:

I hereby devote these waqfs for the beneﬁt of my equals and my inferiors, for the soldier and the prince, the large and the small, the free and the slave, for men and women.”Al-Mansur Qalawun [8] 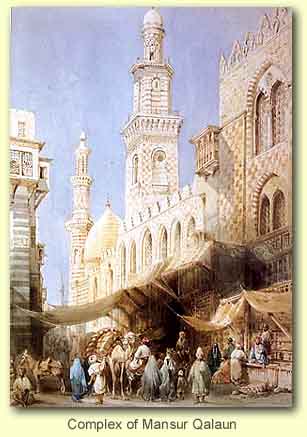 Figure 6. The caption is in the image

The 1284 Al-Mansuri was built with four entrances, each having a fountain in the center. The Mamluk sultan Qalawun made sure it was properly staffed with physicians and fully equipped for the care of the sick. He appointed male and female attendants to serve patients who were housed in separate wards. Beds had mattresses and specialized areas were maintained. Running water was provided in all areas of the hospital. In one part of the building the physician-in-chief was given a room for teaching and lecturing. There were no restrictions to the number of patients who could be treated, and the in-house dispensary provided medicines for patients to take home.[9]

Hospitals of the Muslim world were managed efficiently. For example, Ibn Jubayr, a 12th-century traveler, praised the way in which the Al-Nuri Hospital managed the welfare of patients. He said:

The new one [the Nuri Hospital] is the most frequented and largest of the two [hospitals in Damascus], and its daily budget is about 15 dinar. It has an overseer in whose hands is the maintenance of registers giving the names of the patients and the expenditures for the required medicaments, foodstuffs, and similar things. The physicians come early in the morning to examine the ill and to order the preparation of beneﬁcial drugs and foods as are suitable for each patient.” Ibn Jubayr

Ibn Jubayr also noted one or more hospitals in every city in the majority of the places he passed through, which prompted him to say that hospitals were one of “the ﬁnest proofs of the glory of Islam.” 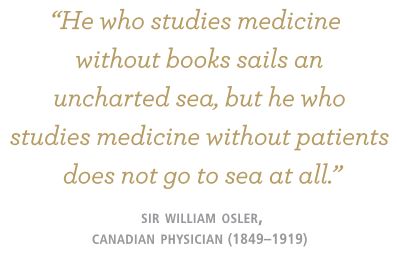 Teaching hospitals were the foundation of training for new medical students, just as they often are today. Eight hundred years ago, these teaching hospitals provided practical and theoretical lessons for students.[10]

Teaching was done both in groups and on a one-to-one basis just like today. Lectures were held in a large hall at the hospital and the subject matter was usually a reading from a medical manuscript by the so-called reading-out physician. After the reading, the chief physician or surgeon asked and answered questions of the students.[11]

Many students studied texts with well-known physicians, and since paper was plentiful in the Muslim world, manuscripts that have written on them “for personal own use” have been preserved. In Europe these same texts were scarce and seldom owned by the student. 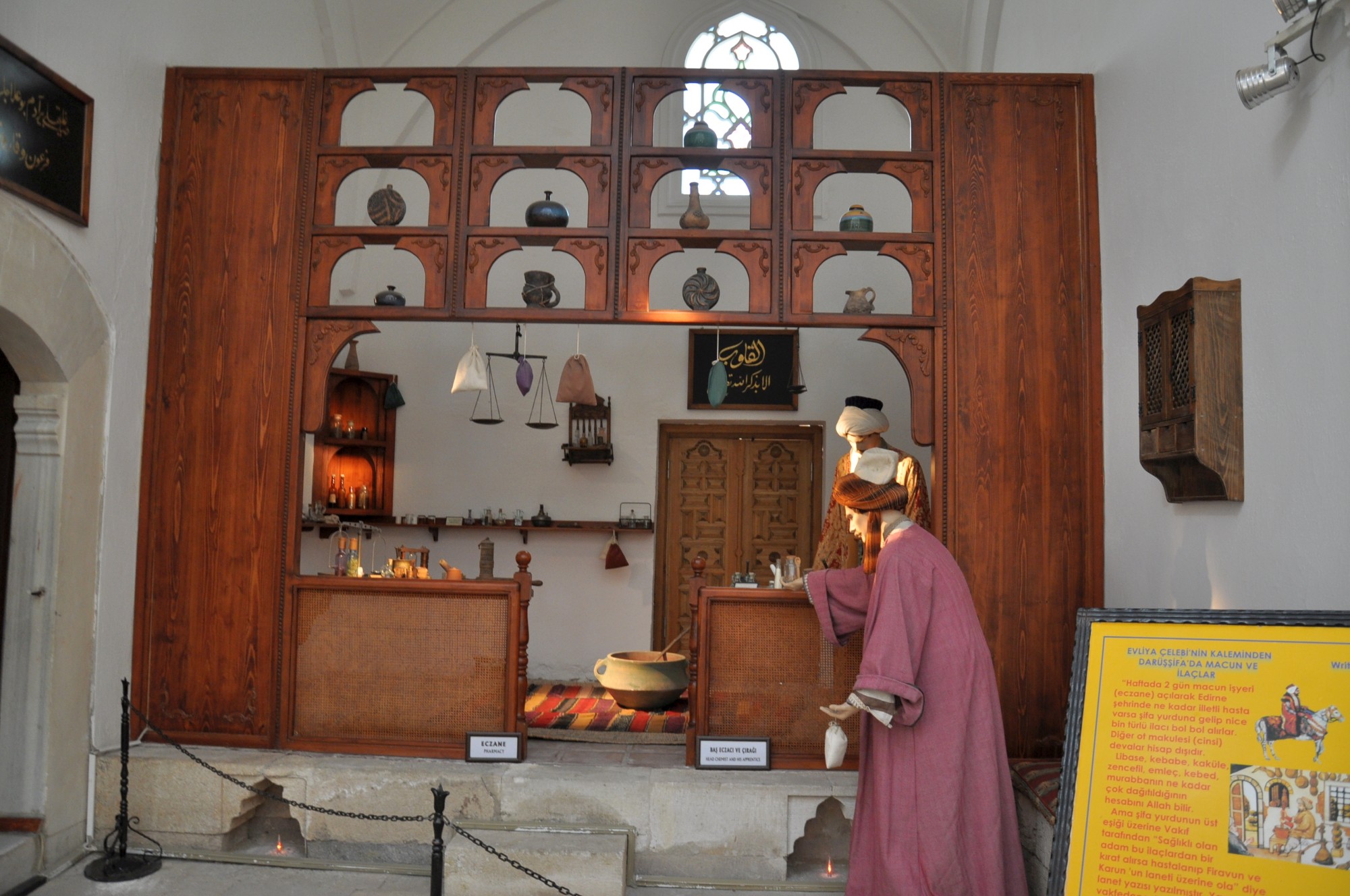 Bedside teaching, another part of medical training with groups of students following the attending physician or surgeon on his ward rounds, was seen as very important. More advanced students observed the doctor taking the history of and examining patients and also making prescriptions for them in the outpatient department of the hospital.[12]

One of these medical schools was in the Al-Nuri hospital in Damascus. Under the direction of the physician Abu al-Majid al-Bahili, the 12th-century ruler Nur al-Din ibn Zangi (1118-1174) founded the hospital. It was named after him, and he equipped it with supplies of food and medication, while also donating a large number of medical books, which were housed in a special hall.[13] 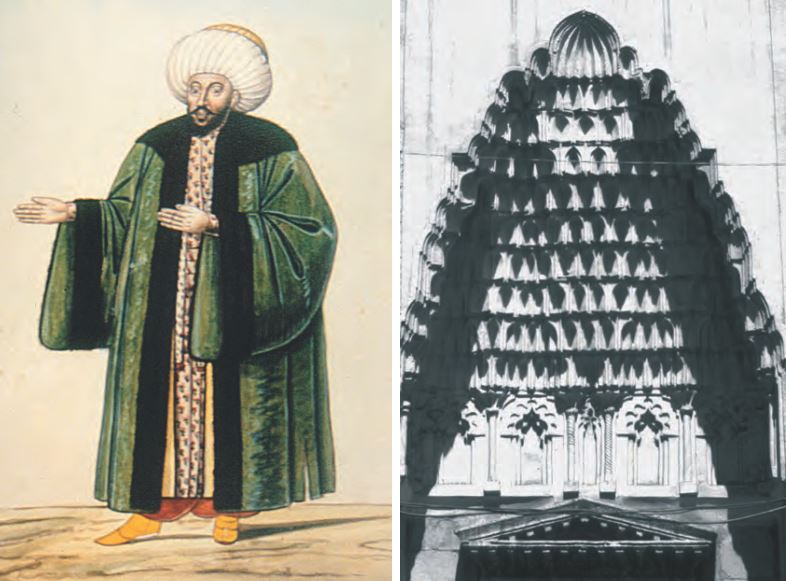 The hospitals in the East were admired by the Crusaders, who later developed similar institutions.[15]

Get the full story from 1001 Inventions: The Enduring Legacy of Muslim Civilization Reference (4th  Edition) Annotated.

Figure 9. A few scenes by İnci Özen from the Dar al-Shifa of Anbar bin Abdullah Hospital during the Seljuk reign in Turkey. The figure is depicting the gate and the music therapy by the physicians (Source: Ottoman Music Therapy by Nil Sari)