In Muslim Spain, Andalusia, in the city of Cordoba lived the famous physician and surgeon, Al-Zahrawi (936-1013 CE), Latinized as Albucassis.

He wrote a monumental work, a medical encyclopaedia entitled Al-Tasreef, in 30 volumes, which was translated into Latin and used as the main medical textbook in most Universities of Europe from the 12th-17th century. This book influenced many authors in both the East and in Europe.

In the 19th volume of Al-Tasreef a chapter was devoted completely to cosmetics and is the first original Muslim work in cosmetology.

Zahrawi’s contribution to medicated cosmetics include under-arm deodorants, hair removing sticks and hand lotions. Hair dyes are mentioned turning blond hair to black and hair care is included, even for correcting kinky or curly hair. He even mentioned the benefits of suntan lotions, describing their ingredients in detail.

For bad breath resulting from eating onions and garlic he suggested cinnamon, nutmeg, cardamom and chewing on coriander leaves. Another remedy for bad breath was fried cheese in olive oil seasoned with powdered cloves.

In the book he also included methods for strengthening the gums and bleaching the teeth.

Zahrawi considered cosmetics a definite branch of medication (Adwiyat Al-Zinah). He deals with perfumes, scented aromatics and incense. There were perfumed stocks rolled and pressed into special moulds, perhaps the earliest antecedents of present day lipsticks and solid deodorants. He used oily substances called Adhan for medication and beautification. There are many Hadiths of the Prophet (pbuh) which refer to cleanliness, management of dress, and care of hair and body. On this basis Zahrawi described the care and beautification of hair, skin, teeth and other parts of the body, all within the boundaries of Islam. 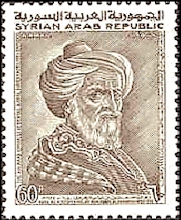 Towards the medicaments, he recommend “Ghawali and Lafayfe” for epileptic fits and “Muthallaathat”, prepared from camphor, musk and honey, in fact very

much like Vicks Vapour Rub, for the treatment of cold relief. Other utilities which we tend to consider as part of the twentieth century but which were present in Muslim Spain and which are described by Zahrawi include nasal sprays, mouth washes and hand creams.

Zahrawi even suggested keeping clothes in an incense-filled nook so that they would have a pleasant fragrance for the wearer. These days the same is achieved by detergents and washing powders and conditioners such as “Lenor”.

The tradition of taking flowers to the sick in hospital is not a recent social trend because Zahrawi advocated this custom a thousand years ago.

There is a street in Cordoba in tribute to Al-Zahrawi named “Calle Albucasis” – the street of Abul Qasim or Al-Zahrawi. House number 6 is preserved today by the Spanish Tourist Board. A bronze plaque, awarded in January 1977 reads: “This was the house where lived Abul-Qasim.”