The terms Algebra and Algorithm are familiar to all of us but how many have heard of their originator Muhammad al-Khwarizmi. In Geography he revised and corrected Ptolemy’s view and produced the first map of the known world in 830 CE. He worked on measuring the volume and circumference of the earth, and contributed to work related to clocks, sundials and astrolabes.

His full name is Abu Abdallah Muhammad ibn Musa Al-Khwarizmi. The last-mentioned name (his nisba) refers to his birthplace, Khwarizm, modern Khiva, south of the Aral Sea. He was born around 780 in the town of Kath part of Khwarizm. Kath is now buried in the sand. He died around 850. He was summoned to Baghdad by Caliph Al-Ma’mun and appointed court astronomer. From the title of his work, Hisab Al-Jabr wal Muqabalah (Book of Calculations, Restoration and Reduction), Algebra (Al-Jabr) derived its name.

Algebra symbolises the debt of Western culture to Muslim mathematics. Ironically, when it first entered the English language it was used as a term for the setting of broken bones, and even sometimes for the fractures themselves. This reflects the original literal meaning of the Arabic word “Jabr,” ‘reuniting of broken bones,’ from the verb jabara (to reunite). The anatomical connotations of this meaning were adopted when the word was borrowed, as algebra, into Spanish, Italian and Medieval Latin from one or other of which English acquired it. In Arabic, however, it had long been applied to the solving of algebraic equations (the full Arabic expression was ‘Ilm al-jabr wa’-l-muqabalah’, literally ‘the science of reunion and equations,’ and the mathematician Al-Khwarizmi used al-jabr as the title of his treatise on algebra.

In the twelfth century Gerard of Cremona and Robert of Chester translated the algebra of Al-Khwarizmi into Latin. Mathematicians used it all over the world until the sixteenth century.

A Latin translation of a Muslim arithmetic text was discovered in 1857 CE at the University of Cambridge library. Entitled ‘Algoritimi de Numero Indorum‘, the work opens with the words: ‘Spoken has Algoritimi. Let us give deserved praise to God, our Leader and Defender’.

It is believed that this is a copy of Al-Khwarizmi’s arithmetic text, which was translated into Latin in the twelfth century by Adelard of Bath, an English scholar. Al-Khwarizmi gave his name to the history of mathematics in the form of Algorism (the old name for arithmetic).

Al-Khwarizmi was a mathematician, astronomer and geographer. He was perhaps one of the greatest mathematicians who ever lived, as he was the founder of several branches and basic concepts of mathematics. In the words of Phillip Hitti:

“He influenced mathematical thought to a greater extent than any other mediaeval writer.”

His work on algebra was outstanding, as he not only initiated the subject in a systematic form but he also developed it to the extent of giving analytical solutions of linear and quadratic equations, which established him as the founder of Algebra.

Hisab Al-jabr wal-muqabala contains analytical solutions of linear and quadratic equations and its author may be called one of the founders of analysis or algebra as distinct from geometry. He also gives geometrical solutions (with figures) of quadratic equations, for example x2 + 1Ox = 39, an equation often repeated by later writers. The Liber ysagogarum Alchorismi in artem astronomicam a magistro A. [Adelard of Bath] compositus deals with arithmetic, geometry, music, and astronomy; it is possibly a summary of Al-Khwarzmi’s teachings rather than an original work.

His astronomical and trigonometric tables, revised by Maslama Al-Majriti (second half of tenth century), were translated into Latin as early as l126 by Adelard of Bath. They contained the first Muslim tables and contained not simply the sine function but also the tangent (Maslama’s interpolation).

His arithmetic synthesised Greek and Hindu knowledge and also contained his own contribution of fundamental importance to mathematics and science. Thus, he explained the use of zero, a numeral of fundamental importance developed by the Arabs. Similarly, he developed the decimal system so that the overall system of numerals, ‘algorithm’ or ‘algorizm’ is named after him. In addition to introducing the Indian system of numerals (now generally known as Arabic numerals), he developed at length several arithmetical procedures, including operations on fractions. It was through his work that the system of numerals was first introduced to the Arabs and later to Europe, through its translations into European languages.

He developed in detail trigonometric tables containing the sine functions, which were probably extrapolated to tangent functions by Maslama.

He also perfected the geometric representation of conic sections and developed the calculus of two errors, which practically led him to the concept of differentiation. He is also reported to have collaborated in the degree measurements ordered by Al-Mamun which were aimed at measuring of volume and circumference of the earth.

Several of his books were translated into Latin in the early 12th century. In fact, his book on arithmetic, Kitab Al-Jam’a wal- Tafriq bi-‘l-Hisab Al-Hindi, was lost in Arabic but survived in a Latin translation. His astronomical tables were also translated into European languages and later, into Chinese. His geographical work Kitab Surat-Al-Ard, (The Form of the Earth) together with its maps, was also translated. In addition, he wrote a book on the Jewish calendar Istikhraj Tarikh Al-Yahud, and two books on the astrolabe. He also wrote Kitab Al-Tarikh and his book on sun-dials was entitled Kitab Al-Rukhamat, but both of these have been lost.

A Servant of God

Al-Khwarizmi emphasised that he wrote his algebra book to serve the practical needs of the people concerning the matters of inheritance, legacies, partition, law suits and commerce. He considered his work as worship to God. 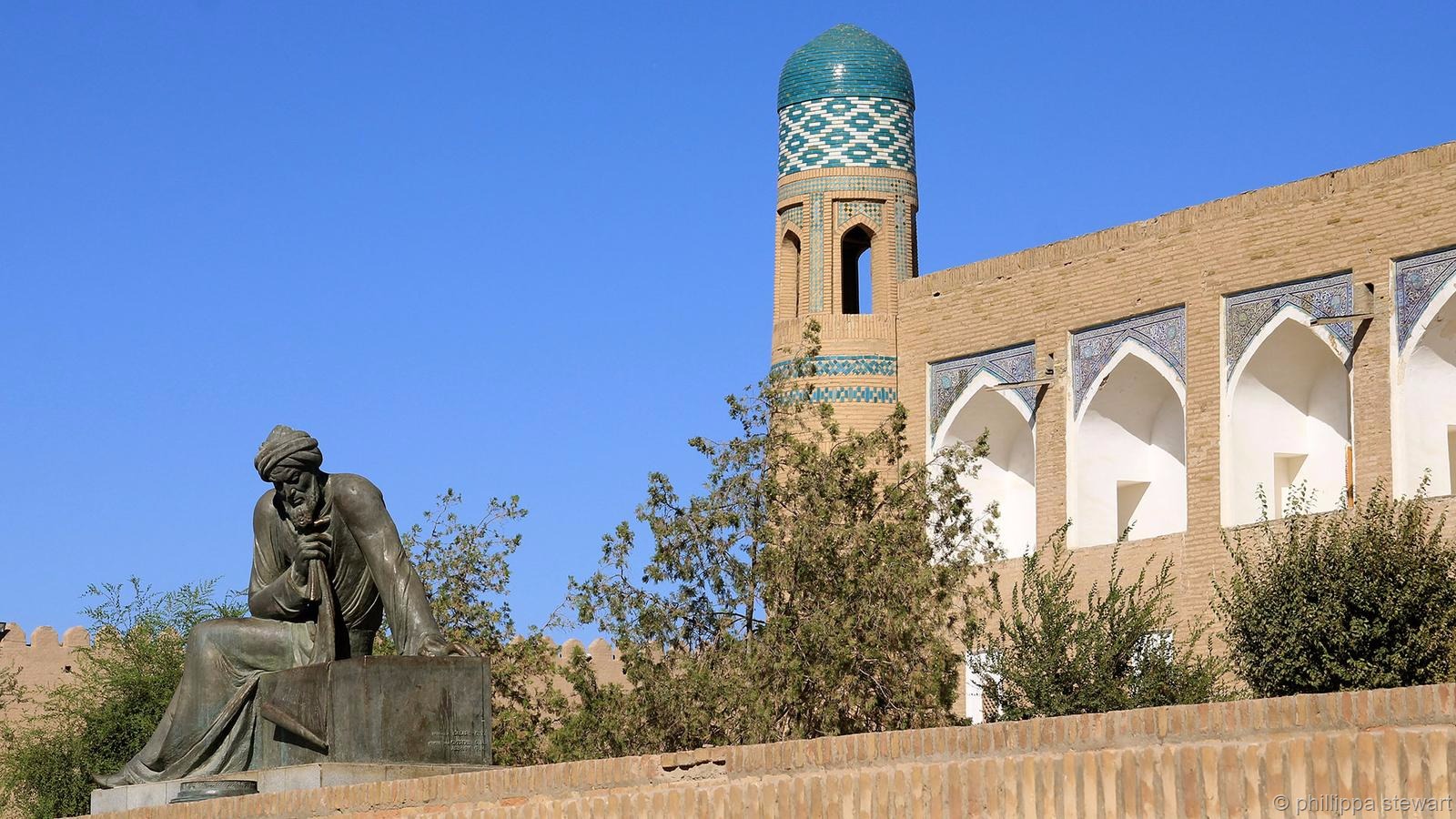 Modern statue of al-Khwarizmi at Khiva, in Uzbekistan. Photo by Phillippa Stewart (Source)