Islamic Art as a Means of Cultural Exchange

With the expansion of Islam over a vast area of land, Muslim artists started to develop the traits they had borrowed from other civilisations, and created their own styles, motifs and fashion which conformed to the teachings of their own religion, thus shaping their own aesthetics. 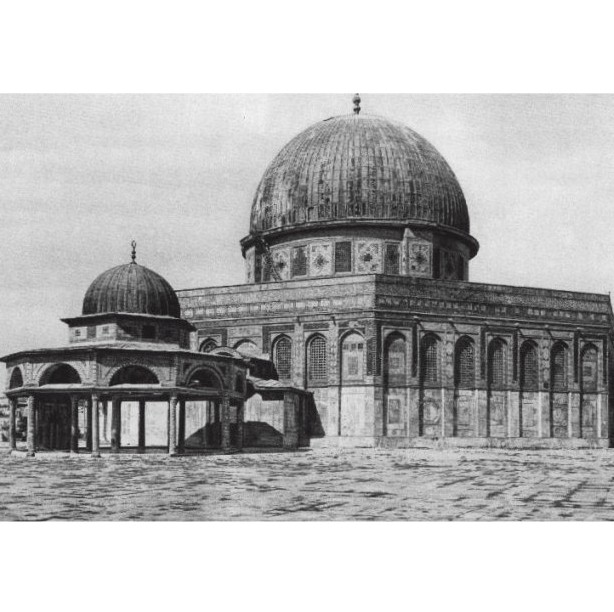 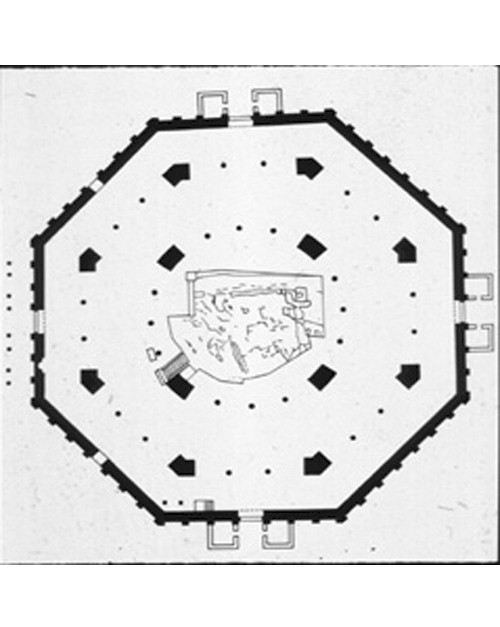 Islamic art began as a catalyst for trends and styles borrowed from local Byzantine, Hellenistic, Coptic, and Sassanian artistic traditions. Yet, not long after, Muslim artists succeeded in developing most of the traits they had borrowed and created their own styles, motifs and fashion which conformed to the teachings of their own religion, thus shaping their own aesthetics.

With the expansion of Islam over a vast area of land, the Arabs came into contact with different civilisations including Greco-Roman, Christian, Buddhist and Chinese. They also encountered indigenous artistic traditions that belonged to various cultures and societies such as those of the Berbers, African peoples, Slavs, Turks, Goths, among others. From these diverse local practices the Muslims chose what suited their beliefs and taste. This selection process, respected regional variety, integrating and uniting this variety within the larger framework of Islamic civilisation which stems basically from Islam as a faith and a way of life. After Islamic art matured and created its own styles, the inter-cultural exchange continued without having a deleterious effect on Islamic aesthetics.

The dissimilar cultural encounters, which were synthesised inside the Muslim consciousness, left their mark on Islamic art and created its most distinguishing trait: “unity within diversity” or “diversity within unity”. Following are three examples that demonstrate the extent of borrowed influences Muslims adopted in their religious monuments without apology or remorse.

Since antiquity, Jerusalem had been an important religious centre for both Jews and Christians, housing monuments such as the Church of the Holy Sepulcher and other churches and temples. When the Muslims took Jerusalem they needed a place where they could congregate for worship and wanted to build a monument that would testify to the glory of the new faith and witness the start of a new era. The Umayyad Caliph, Abd al-Malik Ibn Marwan (685-705), selected a site that had a religious significance for his co-religionists. It was the Holy Rock from which the Prophet Muhammad, accompanied by the Archangel Gabriel, journeyed to Heaven on a stairway of light to be instructed by God, and returned before dawn to Mecca. On this rock, that had absolutely no trace of any ruins to attest to former habitation, Abd al-Malik built the first religious monument in Islam (685-691). The Dome of the Rock (front figure), built by Byzantine and Arab architects and workers who benefited from the Byzantine style and interpreted it within the philosophical framework of the new faith mixing Greek traditions with Arab taste, became the third holiest shrine in Islam after Mecca and Madina. 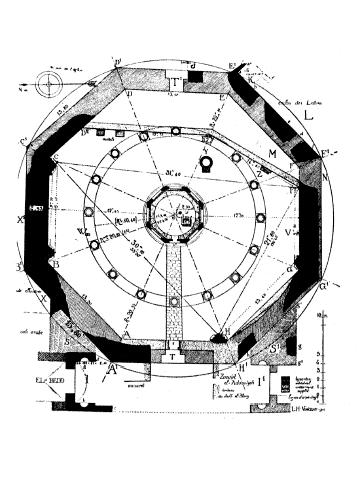 The octagonal plan of the Dome of the Rock (top figure) taken from Byzantine church plans is similar to that of the Church of the Ascension on the Mount of Olives (middle figure) and San Vitale in Ravenna whose circle circumscribing the building has the same diameter as the Dome of the Rock. However, the Muslim monument has a dome that is more important as a sign to be noticed from a distance than as a visible focus of an interior architectural composition. And alone among them it has no focus toward which one is directed. Only around which one may proceed. The whole geometry of the building’s construction creates a visually magnetic shell for something sacred but avoids clarifying the liturgical usage and in this respect, it disconnects itself from the whole liturgical tradition of Christian churches and baptisteries. Following the local trends in Syria, Jordan and Palestine, the columns, internal and exterior surfaces of the dome and the drum were all covered in green, blue and gold mosaics, mother of pearl and small coloured marble squares. The piers and beams were covered with brass sheets and beaten bronze in the form of a band of grape bunches and vine leaves, which make up one of the early patterns of Islamic decoration, inspired by Christian decorative forms.

The golden age of Islamic civilisation (900-1200) occurred in Baghdad, Damascus, Cairo, and Cordoba, among other centres; in liberal and open-minded societies where the intellectual atmosphere grew to a great extent, independent of the religious authorities. When the West began its Renaissance, the Islamic world was passing through a period of stagnation and did not even try to learn from or catch up with Europe’s Ages of Reformation, Enlightenment, or the Industrial Revolution. Instead, the Christian (Armenians, Greeks and others) and Jewish minorities acted as intermediaries between the Islamic world and the West and through them it made limited progress in science and technology. In addition there was the Mongol invasion and other invasions from Central Asia, the deterioration in agriculture and the discovery of a new maritime route around the Cape of Good Hope that caused the decline of the Arab Mediterranean region. All these factors brought about political instability and encouraged religious factionalism and fanaticism.

During the Age of Enlightenment when science was separated from religion after the French Revolution, Western concepts of equality and governance became palatable to the Muslims. Napoleon’s invasion of Egypt (1798-99), albeit lasting a brief period, opened the door to European hegemony over Islamic lands, introduced European knowledge and later gave an incentive to leaders such as Muhammad Ali of Egypt to invite Western experts to help in the development of the country and simultaneously, send students on scholarships to Europe. What took place then was a rapid and widespread movement of Western technology into the Middle East between the second quarter of the 19th century and 1914.

Figure (top). Plan of the Dome of the Rock, Jerusalem Source: T. Burckhardt, The Art of Islam, Language and Meaning, London: The World of Islam, 1976.

Figure (bottom). Plan of the Church of the Ascention in Jerusalem Source: O. Grabar, The Shape of the Holy: Early Jerusalem, New Jersey: Princeton Univ. Press, 1996.

Beauty and Aesthetics in Islam

Islamic Art as a Means of Cultural Exchange