As part of a policy to unify the various regions under Islamic rule, Caliph Abd al-Malik ibn Marwan introduced the first Umayyad gold coins in 691CE. Within a short period of time, Islamic Coins replaced all Sassanian and Byzantine coins in Muslim lands.

During the early years of their reign, the Umayyads continued to use silver Sassanian coins in Iran and Iraq, and gold and copper Byzantine coins in Syria and Egypt (figure 1).

As part of his policy to unify the various regions under Islamic rule, Abd al-Malik ibn Marwan (685-705CE) introduced the first Umayyad gold coins at a time of discord between the Umayyads and Byzantines over the merits of Islam and Christianity. The early coins were struck either in 691 or 692; the Byzantine emperor was angry and refused to accept the new Arab gold currency, renewing the war between the Arabs and the Byzantines.

The new Islamic currency that was first coin to carry an Arabic inscription was called a dinar and was similar, in both size and weight, to the Byzantine solidus. On the obverse, there were three standing figures of unknown identities, as on the Byzantine coin, which had on its obverse the figures of Heracles, Heraclias Constantine, and Heraclonas; on the reverse, the Byzantine cross was replaced by a column placed on three steps topped with a sphere. In the margin surrounding the design the testimony of Islam was written in Arabic: “In the name of God, there is no deity but God; He is One; Muhammad is the messenger of God.”

The new Arab-Byzantine coin stressed the unity of God to counter the Christian Trinitarian doctrine, and made no mention of the caliph.

The Byzantine emperor Justinian II responded to this challenge by striking a new solidus with the head of Christ on the obverse and on the reverse an image of himself robed and holding a cross. 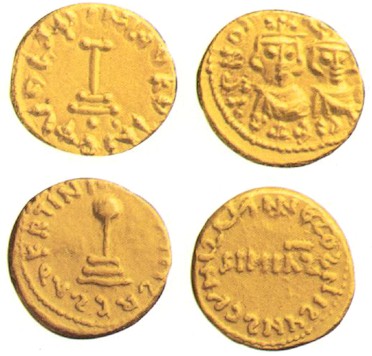 Caliph Abd al-Malik’s response was to issue a new dinar in 693 (figure 2). On its obverse was the upright figure of the caliph, wearing an Arab headdress and holding a sword, with the testimony of Islam inscribed in the margin. The reverse bore the same column on three steps and the sphere, but a new legend appeared around the margin: “In the name of God this dinar was struck in the year four and seventy” Only eight of these early Arab-Byzantine dinars, dated according to the new Islamic calendar, have survived. Once more, the Byzantine emperor responded by striking a new coin similar to that of the Arabs, which greatly displeased Abd al-Malik. In 697 the caliph decided to abandon all traces of iconography and introduced the first Islamic coin devoid of figurative representation (figure 3). On both sides of the new dinar were inscribed verses from the Qur’an, expressing the message of Islam and making each piece an individual missionary of the faith. After he introduced this coin, Abd al-Malik issued a decree making it the only currency to be used throughout Umayyad lands. All remaining Byzantine and Arab-Byzantine pieces were to be handed to the treasury, to be melted down and re-struck. Those who did not comply faced the death penalty. The new gold dinars weighed a bit less than the solidus and the state controlled the accuracy of its weight along with the purity of the gold. Umayyad gold coins were generally struck in Damascus, while silver and copper coins were minted elsewhere.

During the rule of the caliphs who followed, coins of one-half and one-third of a dinar were struck; they were smaller than the dinar in size and weight, and carried shorter inscriptions in the margin denoting the value of each coin. After conquering North Africa and Spain, the Umayyads established new mints in their western provinces where dinars similar to the early half-dinars were struck; these included the name of the city and date of minting.

According to the Qur’an, which commands, “When you measure, give an exact measure and weigh with an accurate scale” (Surah 17:35), the caliphs were responsible for ensuring the purity and weight of the coins, established by the shari’a as seven mithqals of gold to ten dirhams of silver. Obsolete coins, whether from foreign countries or previous governments, and gold and silver bullion were brought to the mint to be refined and struck into a new currency. At the mint, the bullion was first examined to determine its purity, and then it was heated and refined to conform to the established alloy standards. After smelting and casting, the ingots were rolled out and cut into discs. Each disc was then placed on the obverse die and the reverse die placed on top. Finally, the top side of the die was struck one or more times with a mallet so that the design was impressed clearly on both sides of the coin. This method is called die-sinking; these dies were usually made of bronze and could manufacture several thousands of coins before they had to be discarded.

Generally, Islamic coins indicate the place and date of their mint, the name of the ruler, his father’s name, and that of his heir-apparent or envoy. When a new caliph came to power, he had a new coin struck in his name to make the change of rule official. When a revolt took place in some part of the Islamic empire, the leader of the uprising would establish himself by immediately substituting his own name on newly minted coins. Through the study of Islamic coins historical events could be traced with a certain amount of accuracy.

Beauty and Aesthetics in Islam