[Proceedings of the conference 1001 Inventions: Muslim Heritage in Our World organised by FSTC, London, 25-26 May 2010]. In this vibrant plea for cultural inter-appreciation in the Balkan, Sali Shahsivari outlines the role that may be played by heritage research in the case of this tormented region. Departing from his detailed knowledge of the cultures and histories of the South-East Europe, he states that the world has never been before in more need of understanding and cultural coexistence than today. Arguing that much of the current dialogue between nations and groups is mainly confined to Inter-Faith and Inter-Political dialogue, he indicates that there is a dire necessity to search for a new dimension of dialogue, that of cultural dialogue, developed on our shared common heritage, with its multiple dimensions rooted in the past and the present of the different communities. 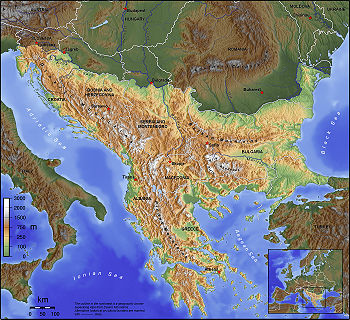 Let me first use this opportunity to congratulate the FSTC and the 1001 Inventions team for this astonishing initiative and very successful story that they brought to light, wishing them a continuous success in their Global Tour.

I am honoured to address such a respected auditorium, and try to share with you some moments on The Heritage Research and its Importance in the Cultural Inter-Appreciation in General, and in the Balkan region in particular.

Never before has the world been in more need of understanding and cultural coexistence than today. Much of the current dialogue between nations and groups is mainly confined to Inter-Faith and Inter-Political dialogue, which kind of dialogue very often turns into a deeper misunderstanding and dispute, and in the best cases into diplomacy and mutual smiles, hiding deep divergences and disagreements.

Therefore, there is a dire necessity to search for a new dimension of dialogue, which will focus more on the common ground and will bring the sides involved in the dialogue into a win-win situation. Hence, the importance of 1001 Inventions initiative which created a new and a wonderful space for dialogue, where the winner is the whole humankind, and there is no loser; that is the celebration of the one and only civilisation – the universal human civilisation – built by different cultures and denominations, based on inter-dependence, sharing one ideal, that is the betterment of life and society.

This reality was very well understood by the founder of sociology, Ibn Khaldun, who, while writing his well-known book Al-Muqaddimah, which was supposed to be a historical book, made a non-religious philosophical analysis of history and civilisation, and founded a new science which he called ‘Ilm al-‘umran, or the science of building the life, the society or the civilisation, by defining the principles of “Al-‘Umran” or the process of such building…

Later on, his successor, Ahmad bin Ali al-Dalji, in his book Al-falaka wa al-maflukun, while talking about the principles of “Al-‘Umran”, noted that “no society can succeed if there is no cooperation even in doing a loaf of bread.”

By projecting the positive contributions each culture made to the development of science and knowledge, we can promote respect and appreciation between them. Much of science has roots in the discoveries of other cultures.

The Balkan Case: Past, Present and Future

Therefore, this new space of dialogue is very important for the Balkan region in particular, a region known historically as a place of clashes and antagonisms, earning a reputation of “balkanization”, which led to many battles, from the old times, passing through the Balkan Wars, up until the conflicts that occurred during the 1990’s, turning it into a fragile place of hatred and ethnic cleansing, known today as the ‘back garden of Europe’.

The Balkans (often referred to as the Balkan Peninsula, is a geopolitical and cultural region of south-eastern Europe. The region takes its name from the Balkan Mountains, which run through the centre of Bulgaria into eastern Serbia. The region has a combined area of 550,000 km2 (212,000 sq mi) and a population of 55 million people.

“Balkan” comes from a Turkish word, meaning “a chain of wooded mountains”. The ancient Greek name for the Balkan Peninsula was the “Peninsula of Haemus” (Chersónesos tou Haímou). The Romans considered the Rhodope Mountains to be the northern limit of the Peninsula of Haemus and the same limit applied approximately to the border between Greek and Latin use in the region (this was later called Jirecek Line). The Balkans are also referred to as South-eastern Europe.

The identity of the Balkans is dominated by its geographical position; historically the area was known as a crossroads of various cultures. It has been a dividing line between the Latin and Greek parts of the Roman Empire, the destination of a massive influx of pagan Slavs, an area where Orthodox and Catholic Christianity met, as well as the meeting point between Islam and Christianity.

In pre-classical and classical antiquity, this region was home to Greeks, Illyrians, Paeonians, Thracians, Dacians and other ancient groups. Later, the Roman Empire conquered most of the region and spread Roman culture and the Latin language, but significant parts still remained under classical Greek influence. The Slavs arrived in the 6th century and began assimilating and displacing the older inhabitants of the northern and central Balkans. During the Middle Ages, the Balkans became the stage for a series of wars between the Byzantine, Bulgarian and Serbian Empires.

By the end of the 16th century, the Ottoman Empire had become the controlling force in the region, after expanding from Anatolia through Thrace to the Balkans.

Despite the fact that the Balkans, historically, has earned such a reputation for clashes and antagonisms, the fact is that it has been an important bridge and a knowledge transfer place. The Balkan region was the first area of Europe to experience the arrival of farming cultures in the Neolithic era. The practices of growing grain and raising livestock arrived in the Balkans from the Fertile Crescent by way of Anatolia, and spread west and north into Pannonia and Central Europe.

But, unfortunately, just as there has been amnesia about one thousand years of Islamic Heritage, I can say that there is still amnesia about the Balkan Heritage and its contribution to the world civilization. This contribution maybe starts somewhere in the ancient Egypt with Thoth (of Albanian origin), who contributed by compiling hieroglyphs (according to the Italian philologer Giusepe Catapano, in his book Thoth-Tat Parlava Albanese (Thoth was speaking Albanian)), and ending with many other scholars who contributed under the Ottoman Empire (like Hasan Tahsin, the first rector of the Istanbul University, and Muhammed Ali Pasha, the founder of modern Egypt).

Nowadays, the Balkans is more diverse then ever. Different cultures, ethnicities, religions and denominations are divided in many countries and societies, turning it into the most heterogeneous place in Europe. This richness in diversity, as much as it can be beneficial, can also be dangerous, if it is not used properly. Therefore, the best use of this cultural richness is by promoting common values and encouraging the young generations on heritage research, because the bad experience in the past has proven that in times of hatred, the first thing to be sacrificed was the common heritage, as was the case with the old town of Dubrovnik and the National Library in Sarajevo.

The Balkans has been always a place and a bridge where different cultures created a mosaic of a diverse heritage, among which are many unstudied manuscripts, a heritage still waiting to be uncovered.

Hope to see you soon in the Balkans!