Figure 1. A description in words of a 12-sector scheme of sacred geography is contained in al-Fārisī’s treatise on folk astronomy. Appended to the treatise in the only known copy are these two diagrams which contain different information. From MS Milan Ambrosiana X73 sup., courtesy of the Biblioteca Ambrosiana. See Schmidl, Volkstümliche Astronomie, for details.(Source)(Archived) 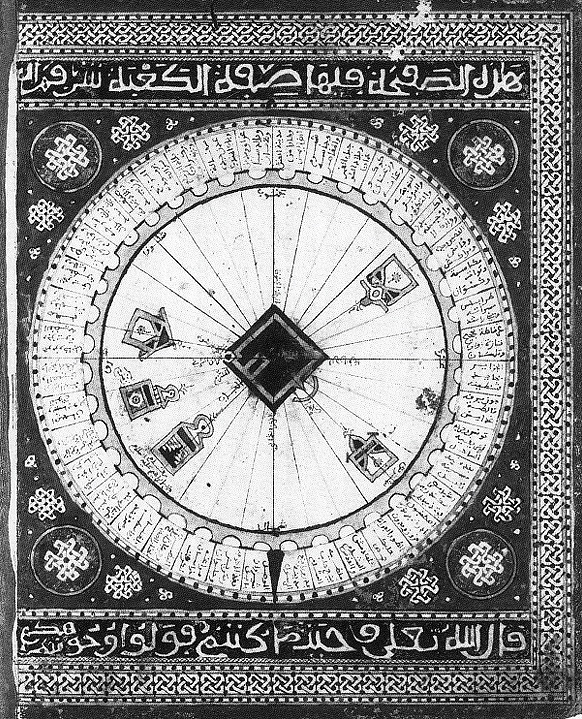 In spite of ample documentation, it is not generally known that in historical Islamic civilization, astronomy was practiced at two different levels. The first was what we now call “folk astronomy”, based on what one can see in the sky, without observation, theory or calculation. The second was what we now call “mathematical astronomy”, involving serious observation programmes, theories about and models for the motions of the sun, moon and planets, and extensive tables for computing celestial positions. In the first two centuries of Islam, only the former tradition was known; the Qur’ān, the Prophetic ḥadīth, and pre-Islamic folk astronomy combined to produce a distinctive Islamic folk astronomy such as one finds in the كتب الأنواء , kutub al-anwā’, books on the seasons and associated heavenly phenomena, and the كتب الهيئة السنية , kutub al-hay’a al-sunniyya, books on sacred cosmology. Thereafter, until the introduction of modern astronomy, the former tradition prevailed amongst the scholars of the sacred law and experts on folk astronomy, and the latter tradition prevailed amongst a small, but highly significant and remarkably active and impressively creative group of Muslim astronomers.

Both of these traditions had their influence on the determination of the qibla, the sacred direction toward the sacred Kaaba in Mecca. That edifice is itself related to the heavens: its rectangular base is aligned primarily to the rising point of the star Canopus (سهيل , Suhayl), the brightest star in the southern sky, its minor axis points toward summer sunrise (مطلع الشتاء) and winter sunset مغرب الصيف)), and its corners (labelled الشامي ، العراقي ، اليمني ، الغربي, Syrian, Iraqi, Yemeni, Western) point roughly toward the cardinal directions. The legal scholars and the specialists on folk astronomy developed their own ways of facing the Kaaba using astronomical alignments. They developed a set of schemes for finding the qibla without any calculation. The astronomers, after the middle of the 8th century, began calculating the direction of the qibla using (medieval) geographical coordinates and mathematical procedures, either trigonometric or geometric or rule-of-thumb. They prepared lists of qiblas of hundreds of localities between al-Andalus and China, and even highly sophisticated cartographic grids with which one could find the qibla for the whole world without any calculation at all. All of these qibla-values were based on medieval longitudes and latitudes, which were, of course, less accurate than the modern ones. 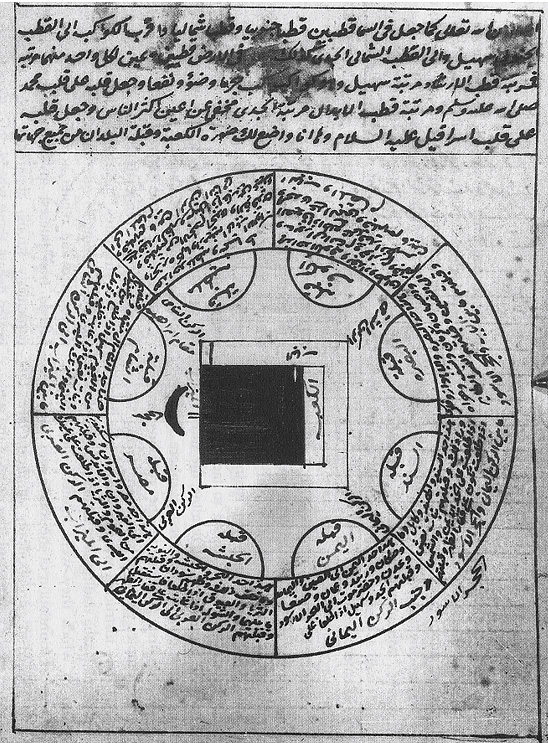 Figure 3. This diagram is a particularly important 8-sector scheme of sacred geography because although it is found in an 18th-century Ottoman Egyptian manuscript it is in fact many centuries (6? 7?) older.(Archived)(Source)

It is important to keep in mind that the qiblas proposed by the Muslim legal scholars would be different from those proposed by the Muslim astronomers. Both sets would necessarily different from modern qibla values, which are based on modern geographical coordinates. Therefore, when investigating the orientation of a historical mosque one must remain aware that there were different (now well documented) methods for finding the qibla, and it would be foolish to expect any historical mosque to be oriented in the modern qibla, unless by coincidence.

We present here the known sources for historical Islamic sacred geography, the notion of the world divided in sectors about the Kaaba with the qibla of each sector defined in terms of astronomical phenomena. These sources have never been surveyed before, although they were first introduced in the article “Makka as centre of the world” in the Encyclopedia of Islam (1987). They were rediscovered mainly in previously-unstudied medieval Arabic scientific manuscripts in libraries around the world. Many more manuscripts of works on astronomy, folk astronomy, geography, sacred law, and encyclopedias, were searched for such materials with negative results. On the other hand, there are surely many more such sources that have not yet been located in manuscript libraries.

It was only twenty years ago that we discovered a different tradition of Islamic sacred geography based on complicated mathematics. The world-maps were so designed that for any locality in the Muslim world one could simply read off the direction and distance to Mecca at the centre. The maps were from 17th-century Isfahan, and their sophisticated grids could not possibly have been conceived by Iranians or Europeans at the time. Further investigation of unstudied manuscripts (and some good luck) revealed treatises from 10th-century Baghdad and 11th-century Isfahan in which the mathematics underlying the cartographical grids was described.

Some 10,000 manuscripts in Arabic, Persian and Turkish await future researchers interested in exploring further the history of the Muslim scientific heritage. Anyone who thinks that the history of that heritage has already been written should have another think. It is not without interest to compare four overviews of Islamic astronomy written successively over the past century (Nallino, King & Morrison (2)). Those who now write surveys of Muslim contributions to science on the internet without having a clue about the available resources or the substantial published literature do a great disservice to future generations. The material presented here constitutes a prime example of an entire tradition of scientific materials that were previously unknown in modern times. 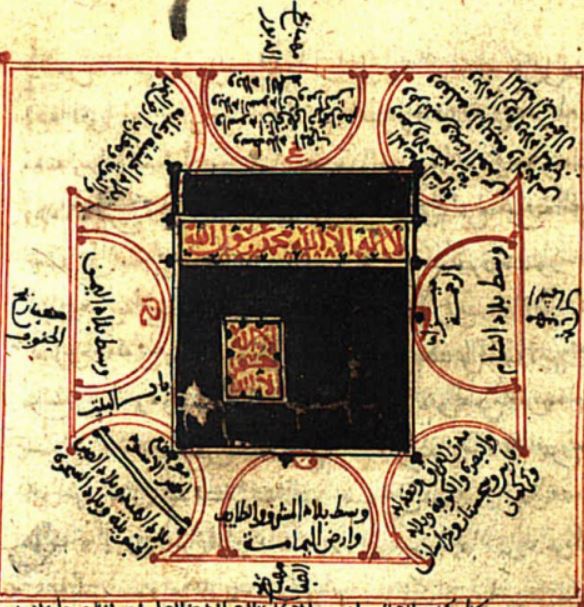 Figure 4. The anonymous 8-sector scheme in MS Şehit Ali Paşa 2776,2, fol. 56v, courtesy of the Süleymaniye Library, Istanbul, which has kindly made the entire manuscript available on the internet.(Source) (Archived)

Various modern authors ignorant of or deliberately ignoring historical qibla procedures have recently attempted to investigate the orientations of two groups of mosques – Dan Gibson on 50 mosques from the first 150 years of Islam and A. J. Deus on 250 mosques from the Turkish world. The absurd conclusions of these two authors are mentioned in the Appendix. Since nobody had bothered to measure these mosque orientations before, the investigators were able to discover for themselves using Google Earth that both groups of mosques did not face Mecca. Gibson has found that the early mosques face (the MODERN direction of) Petra, which confirms his false theory that Islam started in that splendid city where, unfortunately for Gibson, in the early 7th century there were neither Arabs nor Muslims. Deus thinks the four significant directions of each Turkish mosque ✢ have more to do with military campaigns than with religious piety. Now of course these mosques do not face Mecca in the modern sense. However, they do face the direction of the Kaaba as prescribed by Muslim legal scholars (we have 20 different schemes) and/or the direction of Mecca as prescribed by Muslim astronomers (we have 80 different Islamic tables of dozens or hundreds of geographical coordinates and a dozen different mathematical procedures, approximate, exact and simple practical for architects). The flawed methodology of these two authors and their outrageous conclusions have already been demolished but they – both authors and their claims – will surely continue to pervert the history of Islamic civilization for that was their original objective.

Islamic Sacred Geography and Finding the Qibla by the Sun and Stars:
‘A survey of the historical sources,  مسح كتب دلائل القبلة, with an appendix on some recent fallacies about mosque orientations’ by David A. King, Johann Wolfgang Goethe University, Frankfurt, www.davidaking.academia.edu