“Bayt al-Hikma of Baghdad as a Model of an Academy of Sciences” from Dirasat, Human and Social Sciences, Volume 44, No. 3, 2017: This study aims to introduce academy-type institutions of the pre-Islamic era. To illustrate the ascendance of the Islamic tradition of science institutionalisation, founding and patronage of academies, the example of Baghdad’s Bayt al-Hikma (House of Wisdom) which flourished in the ninth century AD is examined closely in the light of primary Arabic sources on the subject as well as recent contemporary international literature. The study will then go beyond the existing narrative on Bayt al-Hikma to argue that it was an ‘academy of sciences’ that preceded by centuries the Academia dei Lincei of Rome, considered by many scholars as the world’s first academy of sciences established in 1603.

A view of one of the two “Iwans” overlooking the courtyard of the so-called “Abbasid Palace” (“al-Qasral-‘Abbasi”) in Baghdad. (Source)

Science institutions have evolved historically, eventually emerging in many forms. Nowadays, they include schools and universities, research centres, learned societies and academies of sciences. However, even with the existence today of over 120 Connally recognised academies of sciences around the world (IAP, 2015), the understanding of the term `academy of sciences’ is, at present, lacking. Many people are ignorant of the fact that an academy of sciences’ primary role is to act as the science advisory or sovereign (supreme authority) (Ravetz, 1980) which actively promotes science in the catchment[1] area where it operates, and a forum where scientific issues are debated, studied and communicated.

A quotation from Drenth, which appears in his book Walks in the Garden of Science provides a definition of an academy of sciences (Drenth, 2006). It reads:

“An Academy is basically a learned society, with (a restricted number of) members who are solely selected on the basis of their scientific or scholarly qualification and reputation… An Academy’s main responsibility is the promotion of science and scholarship through independent research, reflection and discussion as well as evaluative and advisory activities, and the public disclosure of its opinions and judgements.”

Although the above definition essentially explains what the term ‘academy’ means in the context of the 20th century, many of the elements embedded in it are applicable to academies of sciences and academy-type institutions of the past including Bayt al-Hikma of Baghdad in the first half of the ninth century.

This paper aims to provide a short history of ancient academy-type institutions. Moreover, to illustrate the rise of the Islamic tradition of science institutionalisation and patronage, the example of Bayt al-Hikma of Baghdad will be re-examined and the perception that Bayt al-Hikma of Baghdad was an `academy of sciences’ of its day involved in translation, research and information dissemination, will be investigated leading to the conclusion that Bayt al-Hiktna preceded the Accademia dei Lincei, viewed by many scholars as the world’s first academy of sciences established in Rome in 1603.

This, to draw lessons that can help to raise the profile of science and further institutionalise the scientific enterprise in developing countries, today… 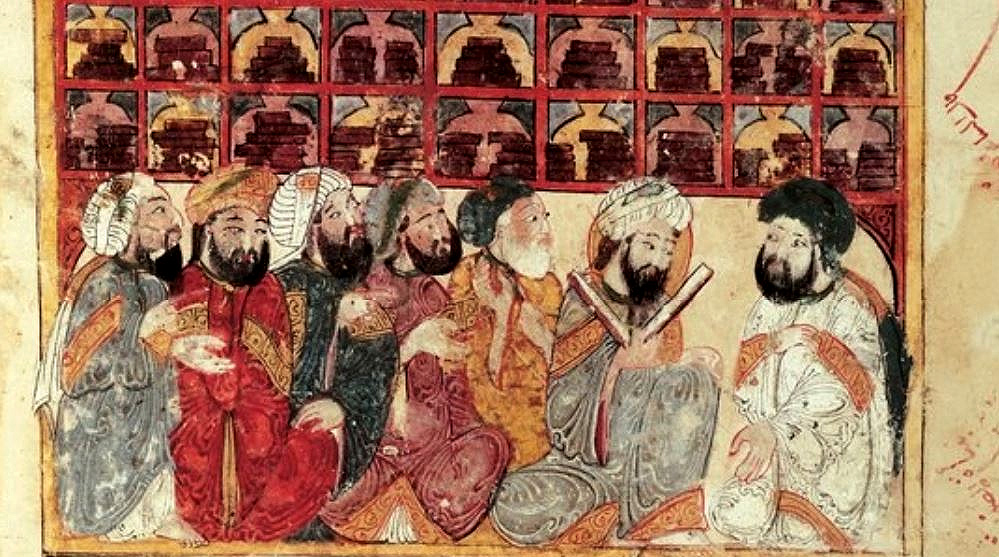 The public Library of Hulwan in Baghdad, from a 13th century manuscript of ‘Maqamât by Harîrî (Source)

Bayt al-Hikma: An Academy of Sciences?

Of the most famous scientific institutions to appear in the early ‘Abbasid era of the Islamic civilisation was Bayt al-Hikma of Baghdad.

Ahmed went as far as to describe it as the Baghdad Academy of Sciences (Ahmed, 2008); Abdus Salam described it as an institute of advanced study (Dalafi and Hassan, 1994), while Youssef Eshe described it as a stronghold of Mu’tazelite Thought during the reign of al-Ma’mun (Al-Awady, 1997). It is highly likely that it was more than an institution of learning of the type described by Makdisi in his book, The Rise of Colleges: Institutions of Learning in Islam and the West (Makdisi, 1981).

The Rise of Bayt al-Hikma

The preliminary founding of Bayt al-Hikma as a concept or indeed as a forum for debate can be attributed to Harun ar-Rashid (AD 763-809) who regularly convened intellectual debates with scholars and scientists (Shalaby, 1954) (Yazigi, 1966).

The majority of historians, including Hitti (2002) in his History of the Arabs, however agree that it was the ‘Abbasid Caliph al-Ma’mun (AD 786 —833) who had formally instituted Bayt al-Hikma in Baghdad around AD 830(41as a combination of a forum of debate, a library, an academy, and a translation bureau.

Al-Ma’mun was an outstanding caliph who was best known for sponsoring the translation of Greek philosophy into Arabic and for promoting the activity of mathematicians, astronomers, engineers and physicians, as the Fihrist of Ibn al-Nadim (the premier Arabic-language bibliographical book to survive to the present day) highlights(Saliba, 2007b) (Ahmad, n.d.) (Cooperson, 2005). His interest in the sciences of earlier civilisations could be traced to the time he had spent at Merv; which has been a stopover town on the Silk Road and on the path of every conqueror that has appeared in Eurasia. Al-Ma’mun was thus influenced by the rich heritage that the earlier cultures of the Greeks. Zoroastrians. Christians, and Buddhists had left (Morgan, 2007). Moreover, Merv, in Khorasan, had a great deal to do with the fortunes of the ‘Abbasids, who drew strong support from that province. The Barmakids, moreover, the family that later supplied the all-powerful ministers who guided and controlled the ‘Abbasid government had its roots in that very city (O’Leary, 1979).

The account of Syed Ameer Ali (1955) of al-Ma’mun’s reign as the most brilliant and glorious included a reference to his academic and scientific pursuits including how he collected the writings of the school of Alexandria, and secured from Athens the best philosophical works of ancient Greece. It was during his reign that new learning reached a climax that culminated in the formal institution of Bayt al-Hikma(Sarton, 1927-31) (Kirk, 1964)(Majeed, 2005).

Modelled after the ancient Library of Alexandria, Bayt was a centre of scholarly activities where books from the Greek, Syriac, and Persian languages were translated into Arabic by expert Arabists (Lerner, 1998); a forum for translating and documenting the rational sciences which were called the ‘sciences of the ancients’ (ulum al-awā’il) to distinguish them from disciplines that dealt with Islam and Arabic language (Sabra, 1987).

Notwithstanding testimonies that Bayt al-Hikma was an academy as important as the Library of Alexandria, and Saliba’s declaration that Bayt al-Hikma (c. 830) and the Accademia dei Lincei (founded in 1603) were carefree physical environments for the pursuit of science (Saliba, 2002), questions were raised on the validity of this argument by Gutas (1998)and later by Saliba himself (2007a) (2008). Gutas has according to Lindberg (2007) debunked the theory that Bayt al-Hikma was a research institute.

In what follows, an attempt will be made to show that Bayt al-Hikma was an academy of sciences of its day with all the associated roles including that of a formally instituted learned society, a forum for debate, research, translation … and should be conceived as such… 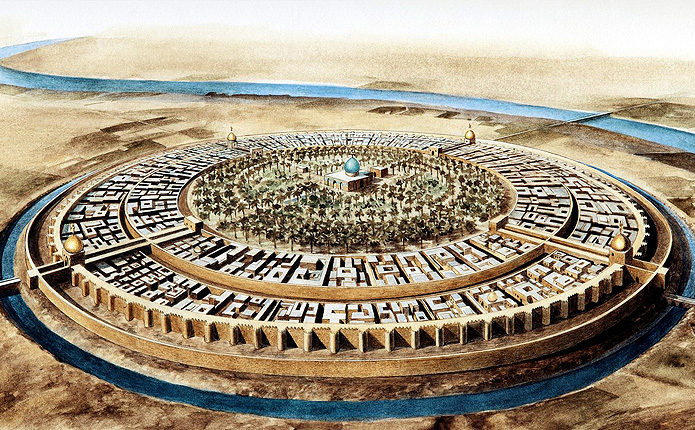 The round city of Baghdad in the 10th century at the time of House of Wisdom. Illustration: Jean Soutif/Science Photo Library (Source)