Charles Burnett Publishes a New Book on the Arabic-Latin Transmission

by The Editorial Team Published on: 18th March 2010

The book Arabic into Latin in the Middle Ages: The Translators and their Intellectual and Social Context by Charles Burnett is a collection of previously published articles on the transmission of Arabic learning to Europe. It concentrates on the identity of the Latin translators and the context in which they were working. The articles are arranged in roughly chronological order, beginning with the earliest known translations from Arabic at the end of the 10th century, and continues until the transfer of the translation activity to Frederick II's entourage in the 13th-century Sicily. 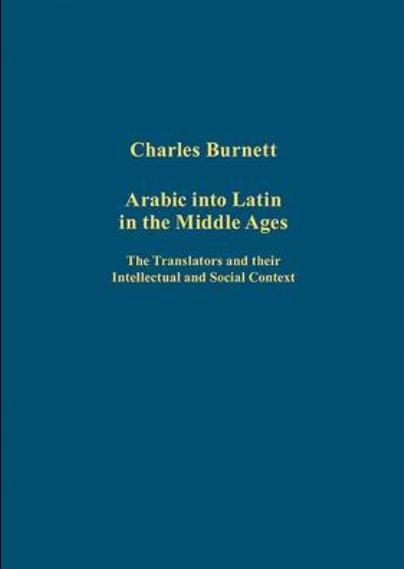 The book published by Ashgate in December 2009 Arabic into Latin in the Middle Ages: The Translators and their Intellectual and Social Context is a collection of previously published articles by Charles Burnett on the transmission of Arabic learning to Europe. The book contains nine articles on some of the main themes of the Latin translation of Arabic texts during the high Middle Ages. The themes range from historical research on the identity of the Latin translators and the context in which they were working on specific texts translated from Arabic and which are preserved in manuscripts, some of which are still unpublished.

The articles are arranged in roughly chronological order, beginning with the earliest known translations from Arabic at the end of the 10th century, progressing through 11th-century translations made in Southern Italy, translators working in Sicily and the Principality of Antioch at the beginning of the 12th century, the first of the 12th-century Iberian translators, the beginnings and development of ‘professional’ translation activity in Toledo, and the transfer of this activity from Toledo to Frederick II’s entourage in the 13th century. Most of the articles include editions of texts that either illustrate the style and character of the translator or provide the source material for his biobibliography.

King Ptolemy and Alchandreus the philosopher: the earliest texts on the astrolabe and Arabic astrology at Fleury, Micy and Chartres

Adelard of Bath and the Arabs

John of Seville and John of Spain, a mise au point

About the Author: Charles Burnett is Professor of the History of Islamic Influences in Europe at the Warburg Institute, University of London, UK. For a full list of his publications (until 2008), click here.

– Arabic Medicine in the Mediterranean

– The Appreciation of Arabic Science and Technology in the Middle Ages

– The Impact of Islamic Learning: The spread of Arabic scientific literature to Europe

– The Impact of Islamic Science and Learning on England: Adelard of Bath and Daniel of Morley

– Transmission of Muslim Astronomy to Europe