by The Editorial Team Published on: 22nd April 2014

Last November 2013, the world has seen a new unique publication. The Al-Furqan Islamic Heritage Foundation of London published a new book authored by Mohammed Abattouy and Salim al-Hassani containing the critical edition of the Arabic texts composing the corpus of mechanics of Abu Hatim al-Muzaffar al-Isfizari, a Muslim scientist from the late 5th-early sixth century after the Hijra (corresponding to the late 12th-13th centuries CE).

This critical edition of al-Isfizāri’s book deals with the field of mechanics, known in the Arabic scientific tradition as “the sciences of weights and ingenious devices” (‘Ilmay al-Athqāl wa-‘l-Ḥiyal). On the basis of the extant manuscripts of Al-Isfizari’s works in these two fields, the book introduces the theory of the “steelyard” and its applications, and extensively describes and provides exhaustive details on a large group of mechanical devices. The critical edition of these works is organized into seven parts, producing the first complete version of Al-Isfizari’s contributions to the fields of theoretical and applied mechanics . Reading this work of Al-Isfizāri enhances the knowledge of historians and researchers of the Islamic heritage in science and technology, and specifically the history of Arabic mechanics. It also confirms both the originality and innovative characteristics of the Arabic contribution to the field of machinery in terms of using mathematics and physics in both experimentation and theory. The work demonstrates how Muslim scientists’ ventures had substantially participated in transferring and developing scientific knowledge in addition to elaborating its value from the history of technology and mechanical engineering perspective. 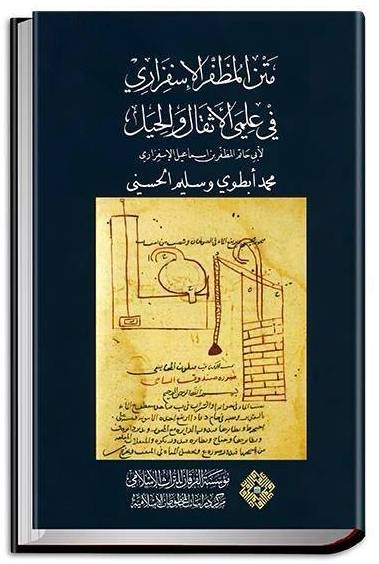 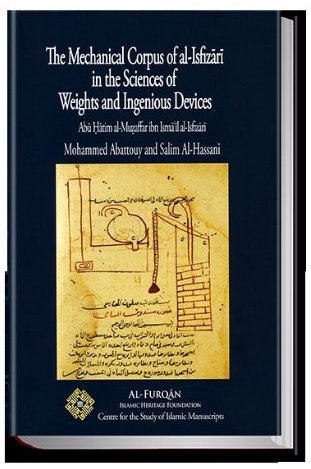 Fig. 1a-b: The Arabic and English front covers of the book.

Details of the book

See here the announcement of the book on the Al-Furqan Islamic heritage Foundation’s website. The book can be purchesed through Amazon.co.uk. 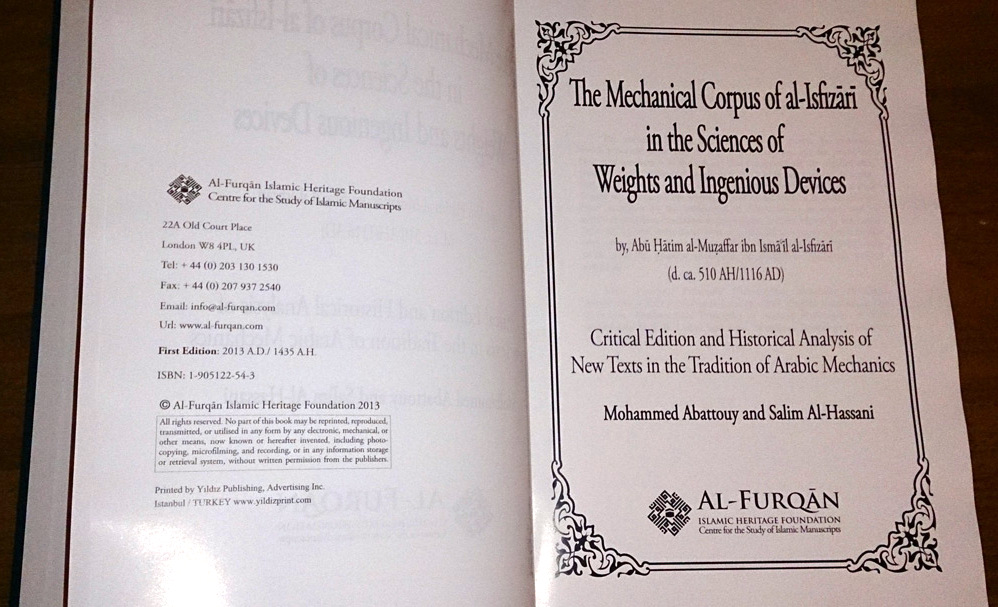 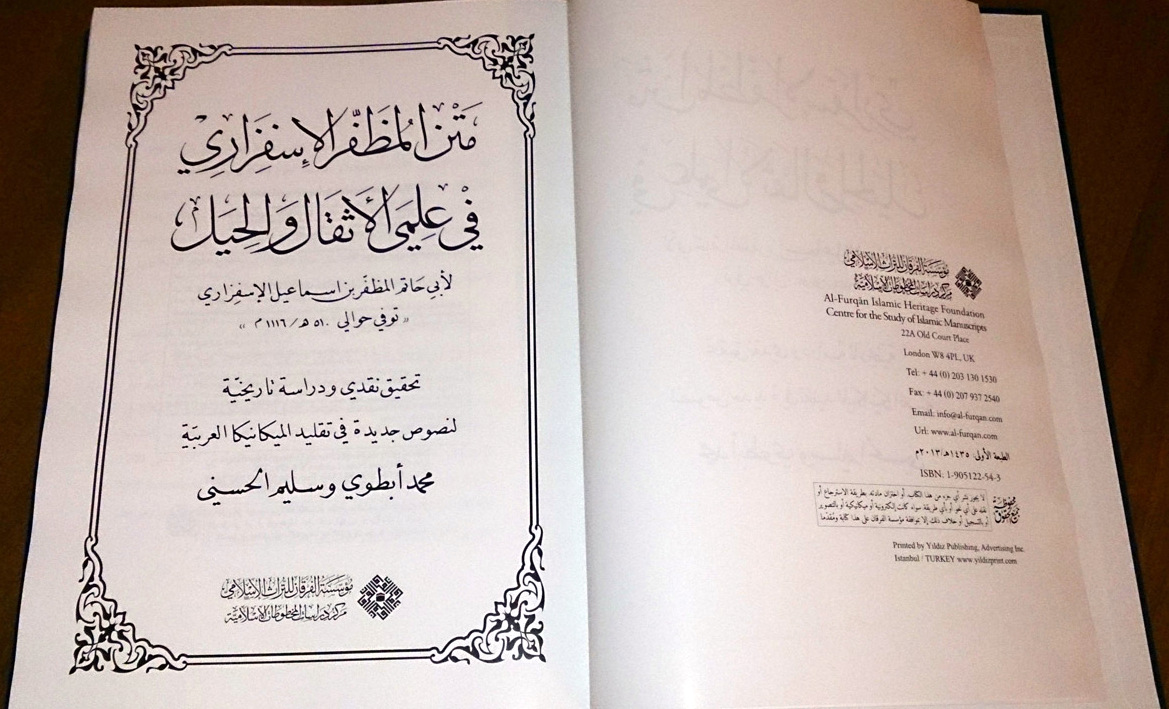 Fig. 2a-b: Arabic and English frontispices of the book.

Up until this point, academic endeavour in medieval Muslim engineering was confined largely to few prominent figures, such as the Banū Mūsa brothers (flourished 9th century CE), al-Jazari (d. ca. 1206 CE), and Taqi al-Din ibn Ma’ruf (d. 1588), thanks mainly to the pioneering work of the late Donald Routledge Hill (d. 1994), a British engineer and historian of science and technology whose primary interest was the engineering heritage of the Arabic-speaking Muslim world, and Ahmad Yusuf al-Hassan (d. 2009), the Palestinian and Syrian historian of Islamic technology. The edition of the corpus of mechanics of Al-Isfazārī brings to light for the first time the work of Abū Ḥātim al-Muẓaffar al-Isfazārī, a great, but previously obscure, scholar of mechanics from the generation preceding Al-Khazini. One of his great achievements was that he expanded the horizons of our knowledge of medieval mechanics, engineering and technology as practiced by scholars in the Islamic world. The publication of a critical edition of al-Isfazārī’s scholarship in theoretical and practical mechanics is, therefore, a highly significant publication in the field of Muslim engineering history, and should prove to be a real treasure for the academic and the interested layman alike.

Providing such a critical edition with an introduction and large appendixes, which was the product of years of painstaking work by the editors, Prof. Mohammed Abattouy and Prof. Salim al-Hassani, is just a first volume in an endeavour which is still pursued by the two authors, who are working on the English translation and analysis of Al-Isfizari’s corpus of mechanics. 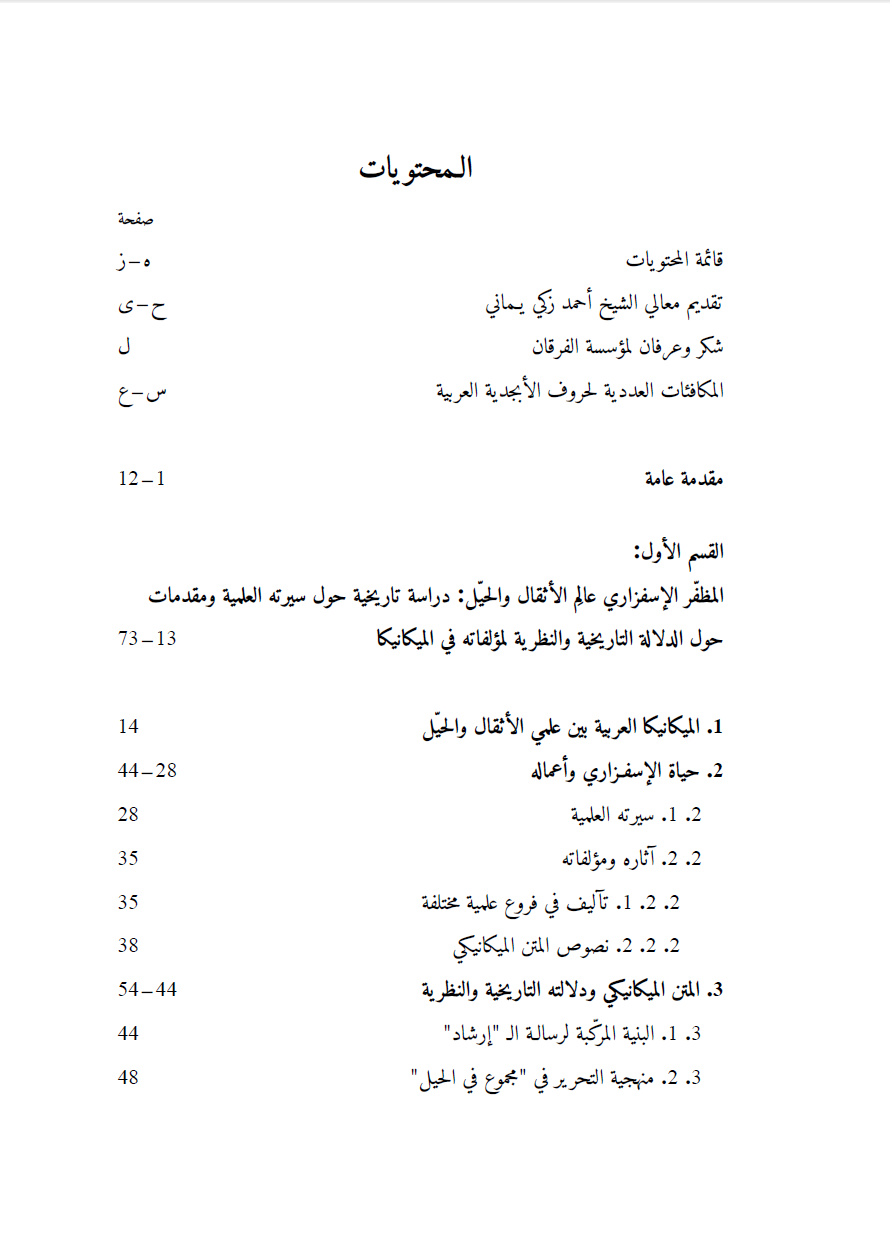 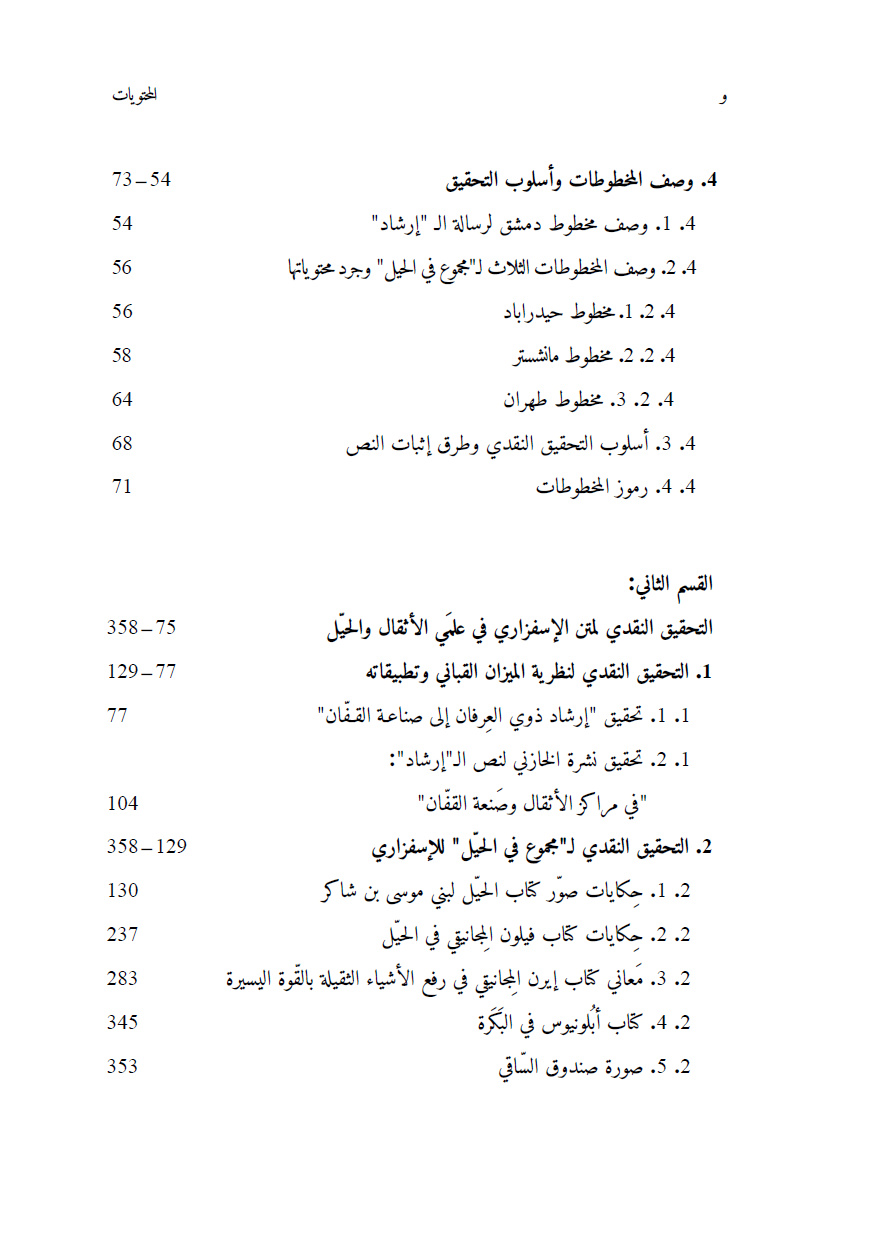 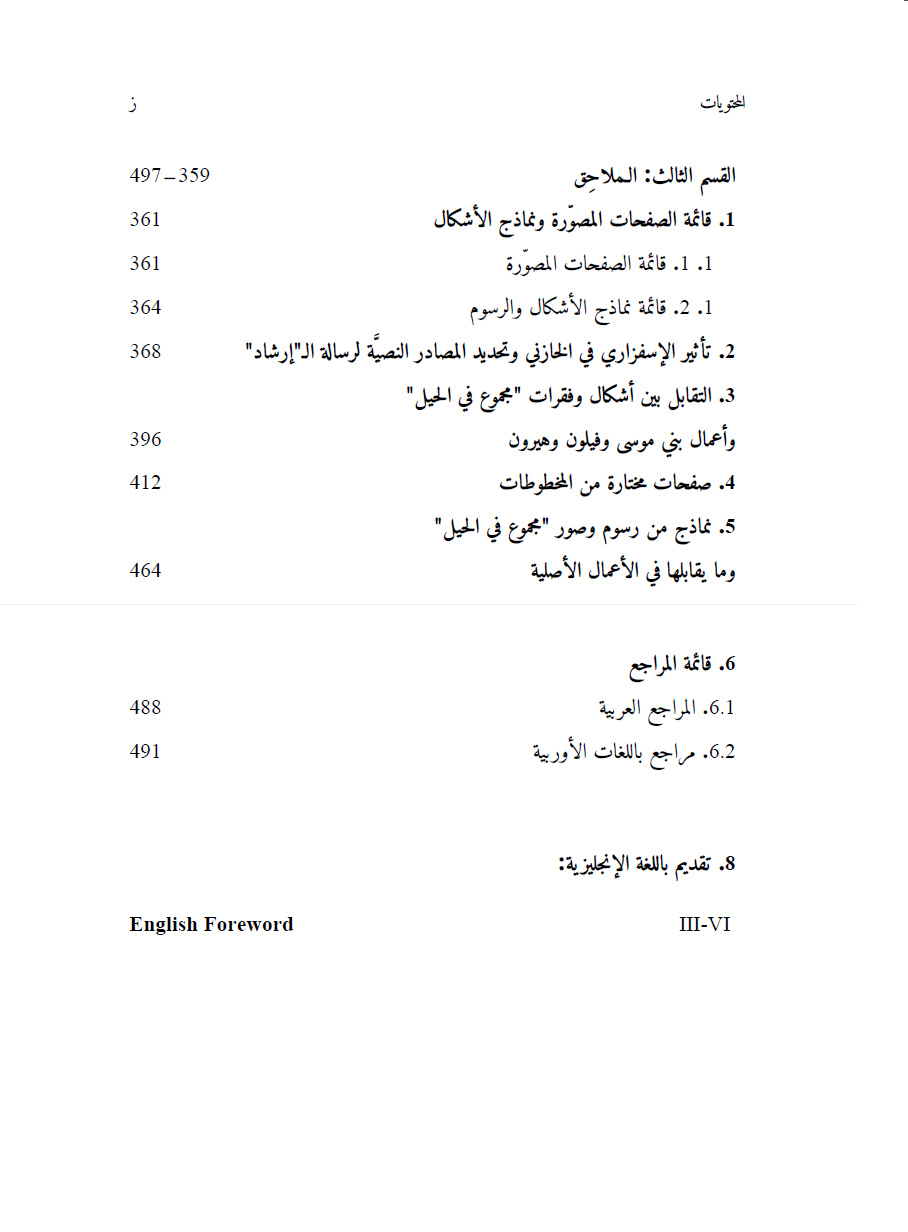 Fig. 3a-c: Table of contents of the book.

Al-Isfazārī and his manuscripts of mechanics

Al-Isfazārī flourished in Khurasan in the late 11th– early 12th century CE, a period of time when the Seljuk Turks were the main political power in the region. He was a contemporary of cUmar al-Khayyam and Abd al-Raḥmān al-Khāzinī. A mathematician, astronomer, and author of texts in geometry, meteorology, measurements, and several works in mechanics, Al-Isfazārī was also a member of the team of scholars who worked in the observatory of the Seljuk Sultan Malikshah in the city of Isfahan during the period 1074-1092 CE (467-485 H).

The contents of the Codex have the form of a compendium in which al-Isfazārī collected his own abridgements and commentaries on the works of applied mechanics of his predecessors: Heron of Alexandria, Philon of Byzantium, and the Banū Mūsa brothers. 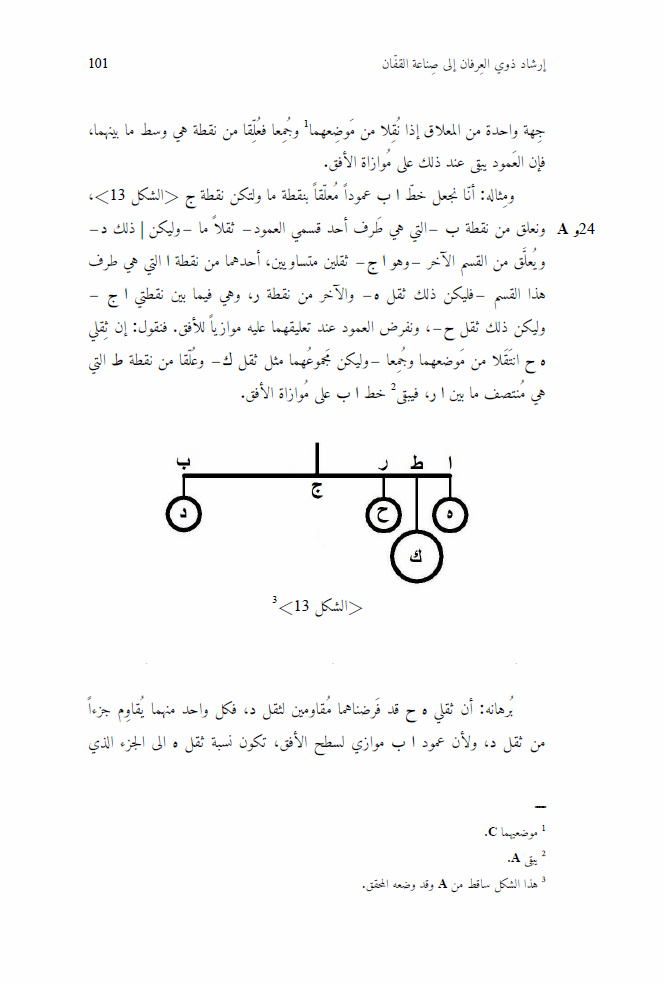 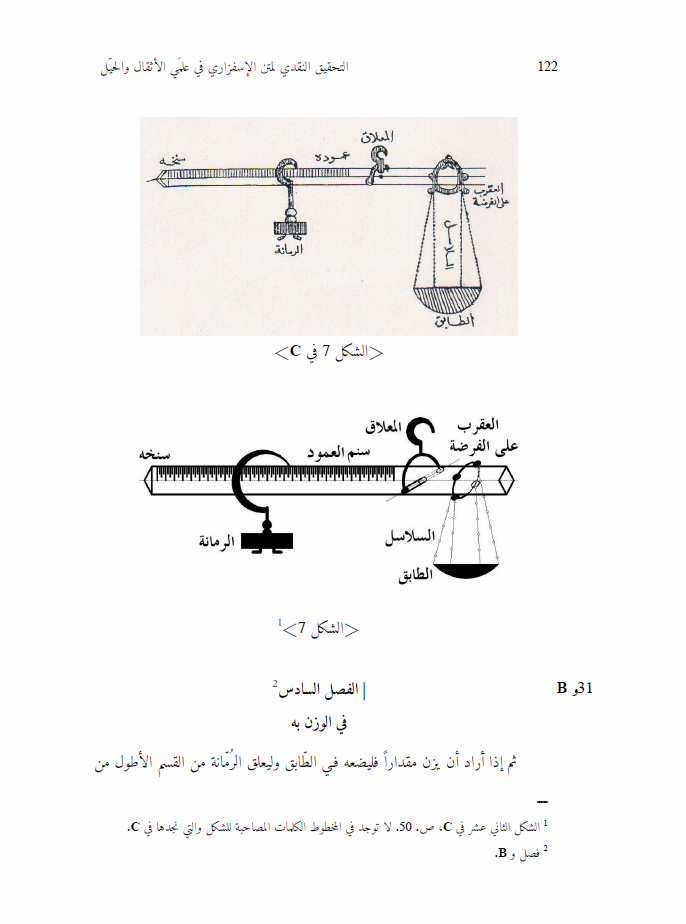 In addition to these three major components of the Codex, he added a text on pulleys by the Greek mathematician Apollonius, which had been mentioned by sources from Antiquity, but never found until its discovery among the items of al-Isfazārī’s Codex. The inclusion of this text in the Codex has provided a unique opportunity to learn about some of the contents of Appolonius’ original text.

Finally, the Codex also includes a short fragment called Ṣūrat Ṣundūq al-Sāqī, in which the second paragraph describes a machine similar to the organ of Murisṭus which was described in some Arabic manuscripts and ascribed to that ancient Greek author.

In both the Irshād and the Codex, al-Isfazārī gathered together, edited, revised and summarized the works of his predecessors, and added new results of his own. The list of authors and texts he touched upon is vast and highly impressive. They include: Pseudo-Aristotle, Pseudo-Euclid, Philon of Byzantium, Heron of Alexandria, Apollonius, Murisṭus, Thābit ibn Qurra and the Banū Mūsā brothers. This attempt to create what amounted to an encyclopaedia of the whole corpus of Greek and Arabic scholarship in the field of mechanics is unique in the literature of Arabic-language mechanics. 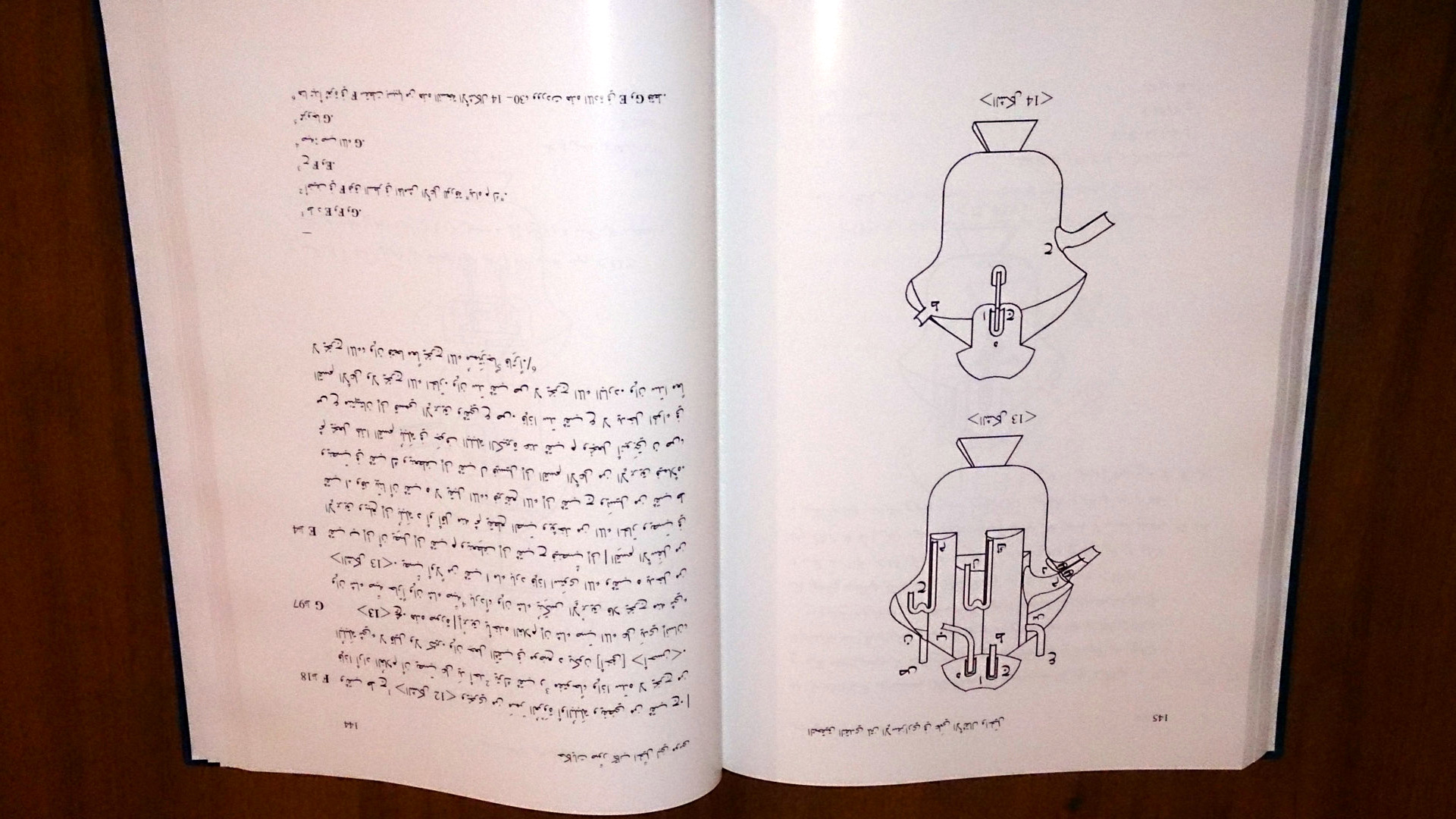 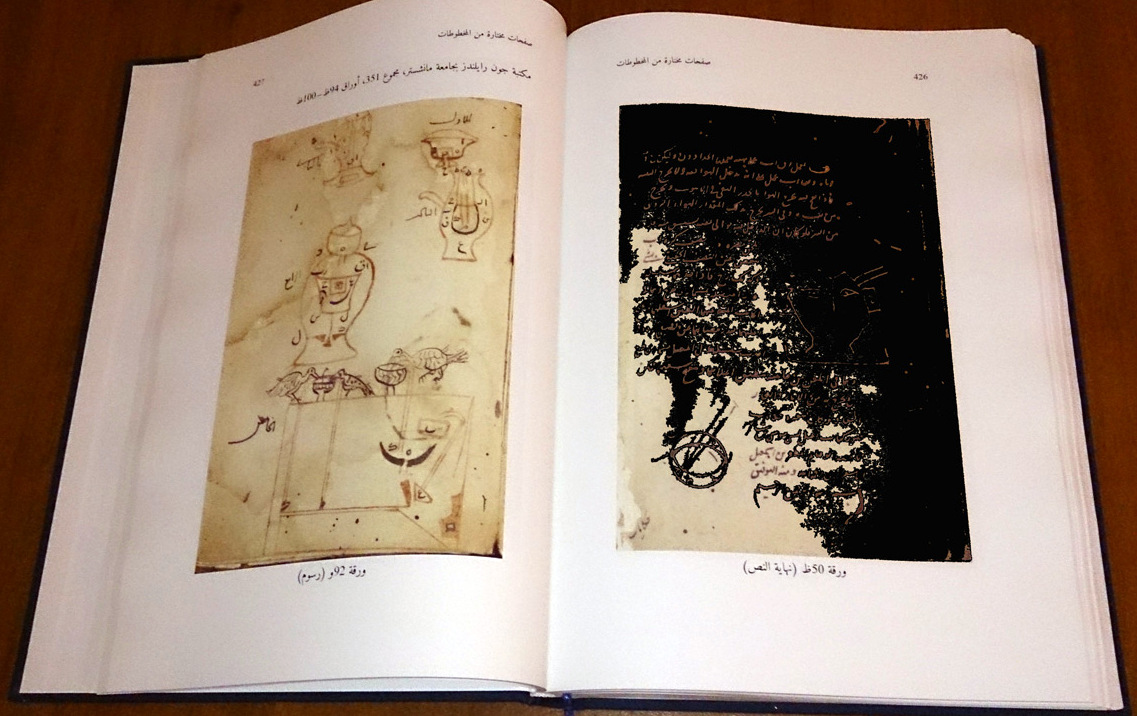 The first part of the book is an extensive biography of al-Isfazārī, as well as a bibliography of his works, and analyzes the historical and scientific context of his contribution within the tradition of mechanics in Muslim civilization, and in the history of mechanics at large.

The second part of the book is more technical and specialised, presenting and critically analyzing al-Isfazārī’s corpus of mechanics. In order to present an accurate and rigorous critical edition of al-Isfazārī’s scholarship in this field, the editors utilised all known extant manuscripts of al-Isfazārī’s work, housed in libraries across the world, including: Manchester, Hyderabad, Tehran, Damascus, Saint Petersburg, and Philadelphia. The result was as the reconstruction of the texts of seven treatises, of different lengths, making a total of about 300 pages of Arabic text and diagrams. The critical edition is accompanied by a detailed critical apparatus, consisting of variant readings documented in footnotes and in various tools and data presented in five large appendixes (approximately 130 pages). Finally, all the diagrams (approximately 250) of al-Isfazārī’s corpus of mechanics were reconstructed and redrawn in the edition, mainly in line-drawing format, but also many were reconstructed in 3-D. Such modern diagrams greatly aid in understanding the original texts and sketches. 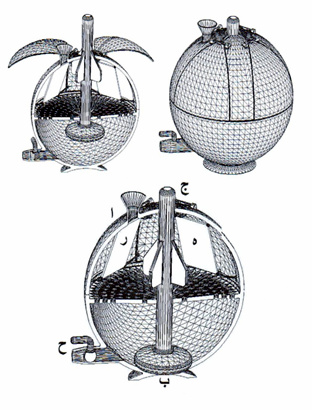 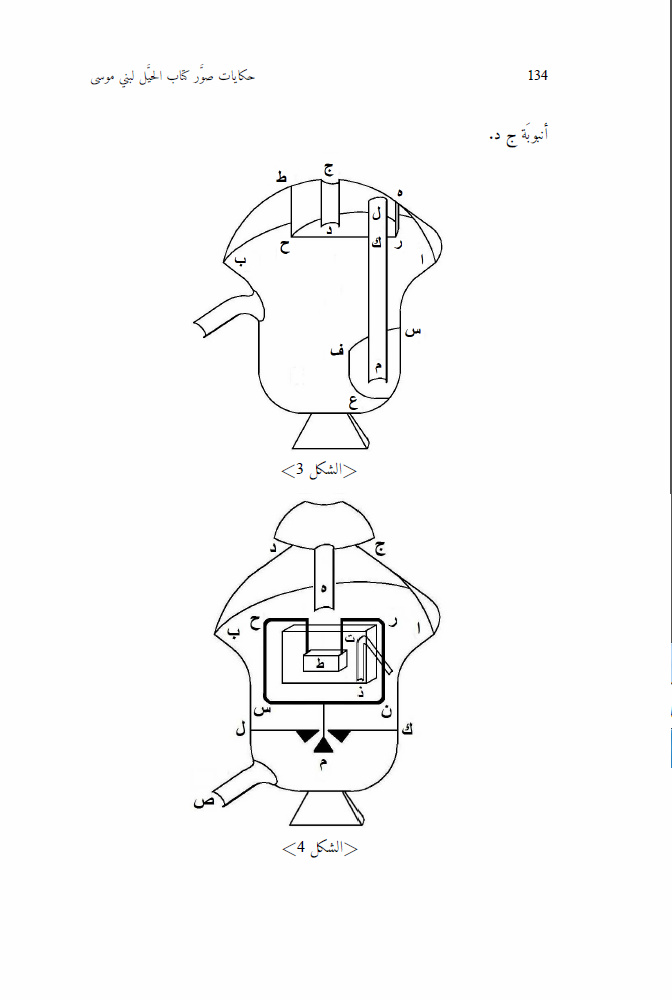 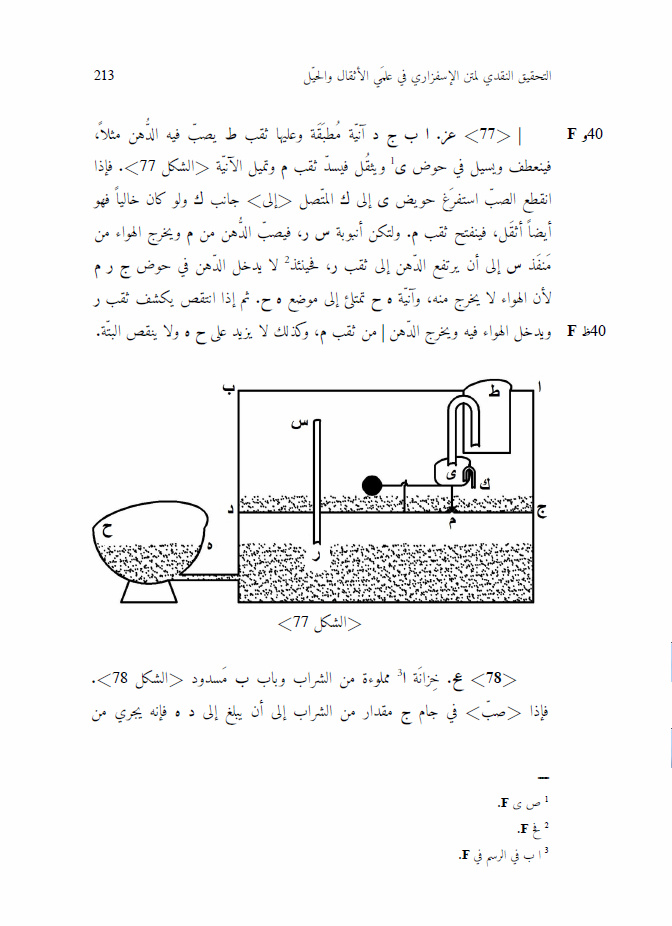 Significance of the work

By reconstructing the life and works of Abū Ḥātim al-Isfazārī and presenting the first complete critical addition of his scholarship in mechanics, Matn al-Muẓaffar al-Isfazārī fī cilmay al-aṯqāl wa’l-ḥiyal (The Mechanical Corpus of al-Isfazārī in the Sciences of Weights and Ingenious Devices) fills a gap in the study of mechanics in Muslim civilization, and in the history of mechanics at large. It brings to life a long-neglected, but extremely important and original scientist and renders into a readable, modern, critical edition his ambitious and unique attempt to create what amounted to an encyclopaedia of the whole corpus of Greek and Arabic scholarship in the field of mechanics, until his time. 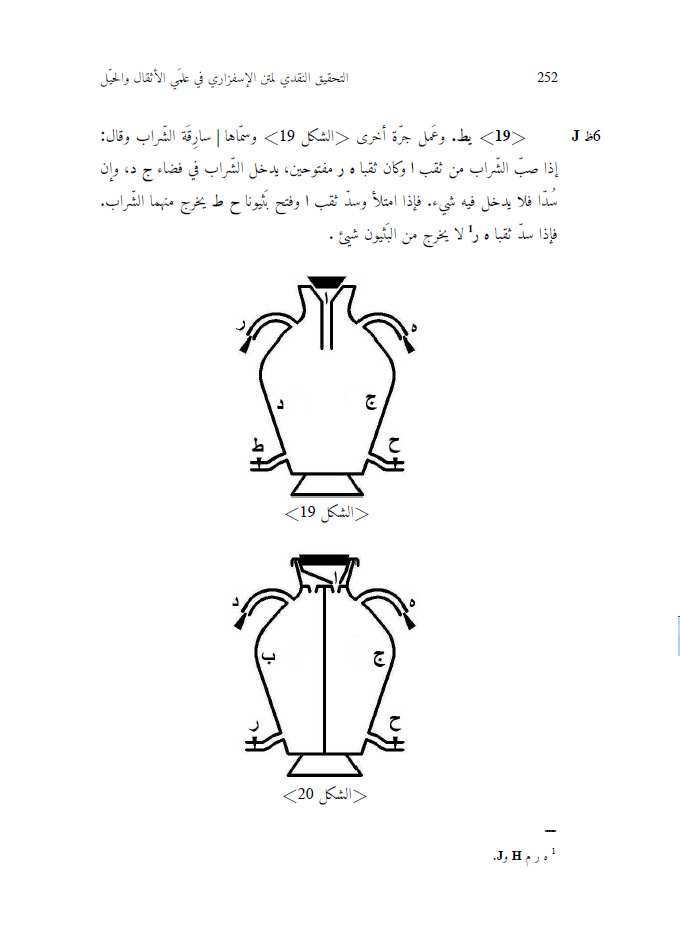 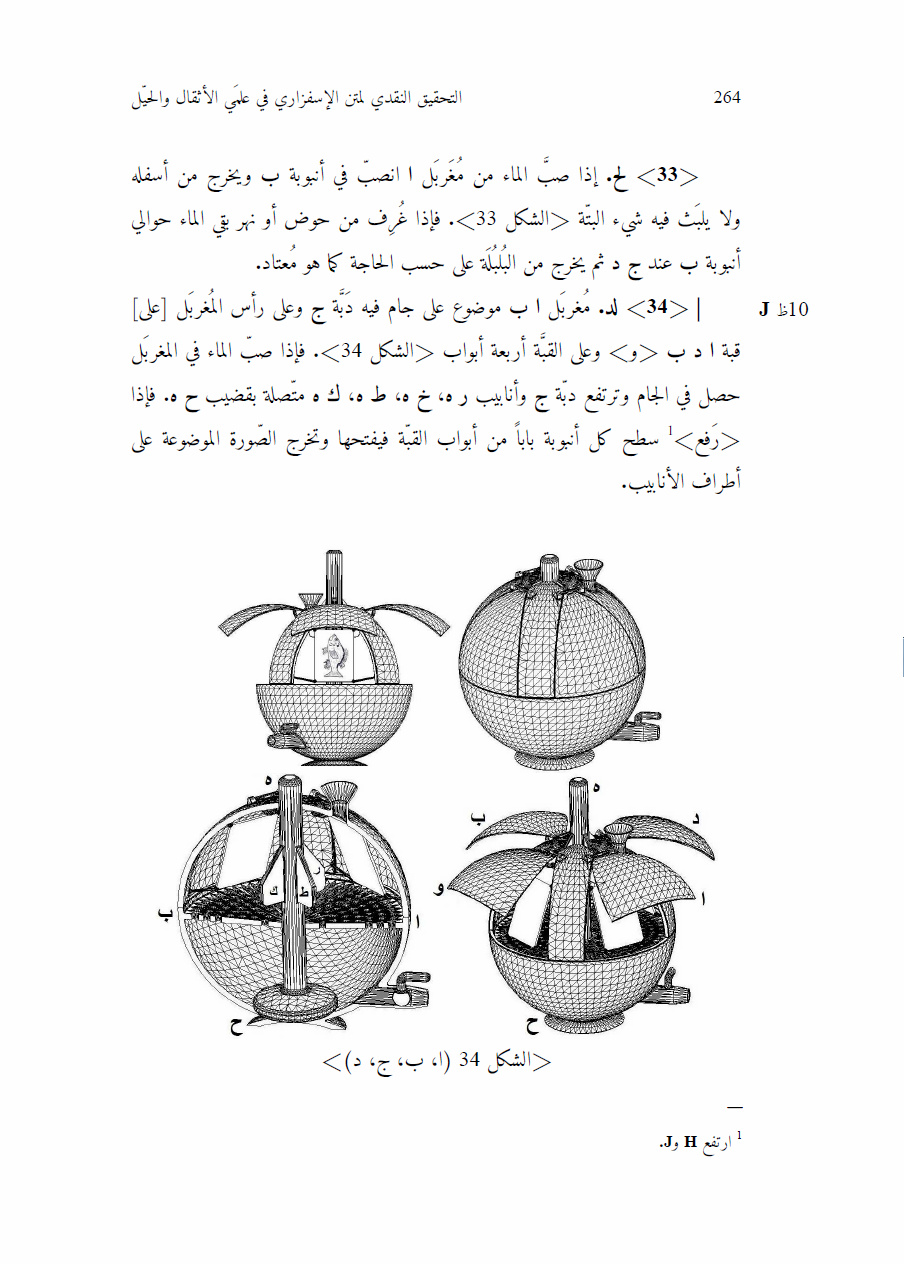 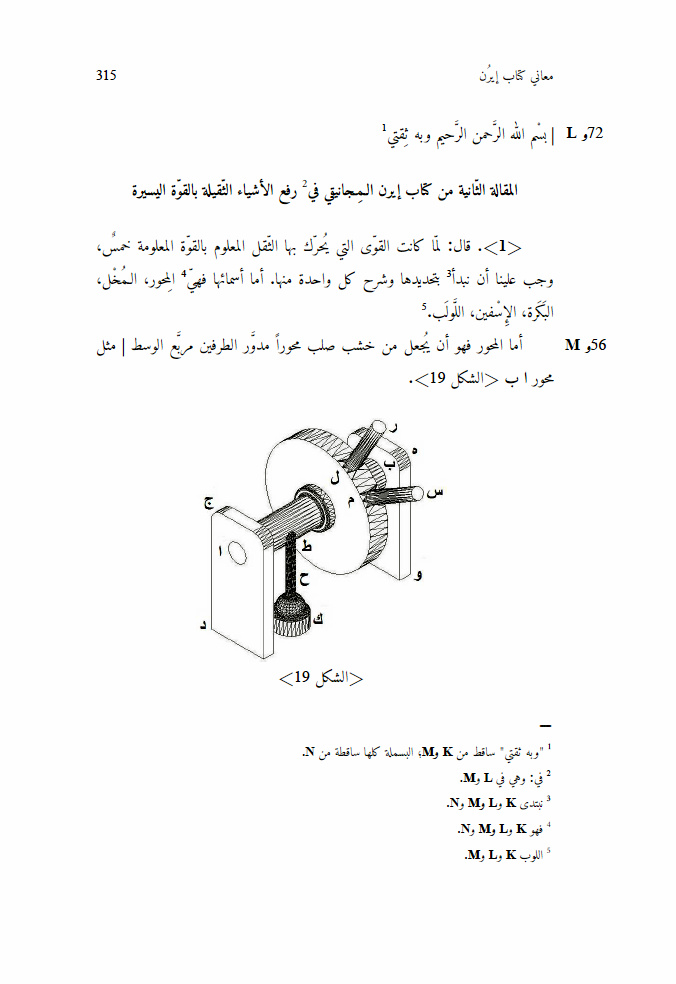 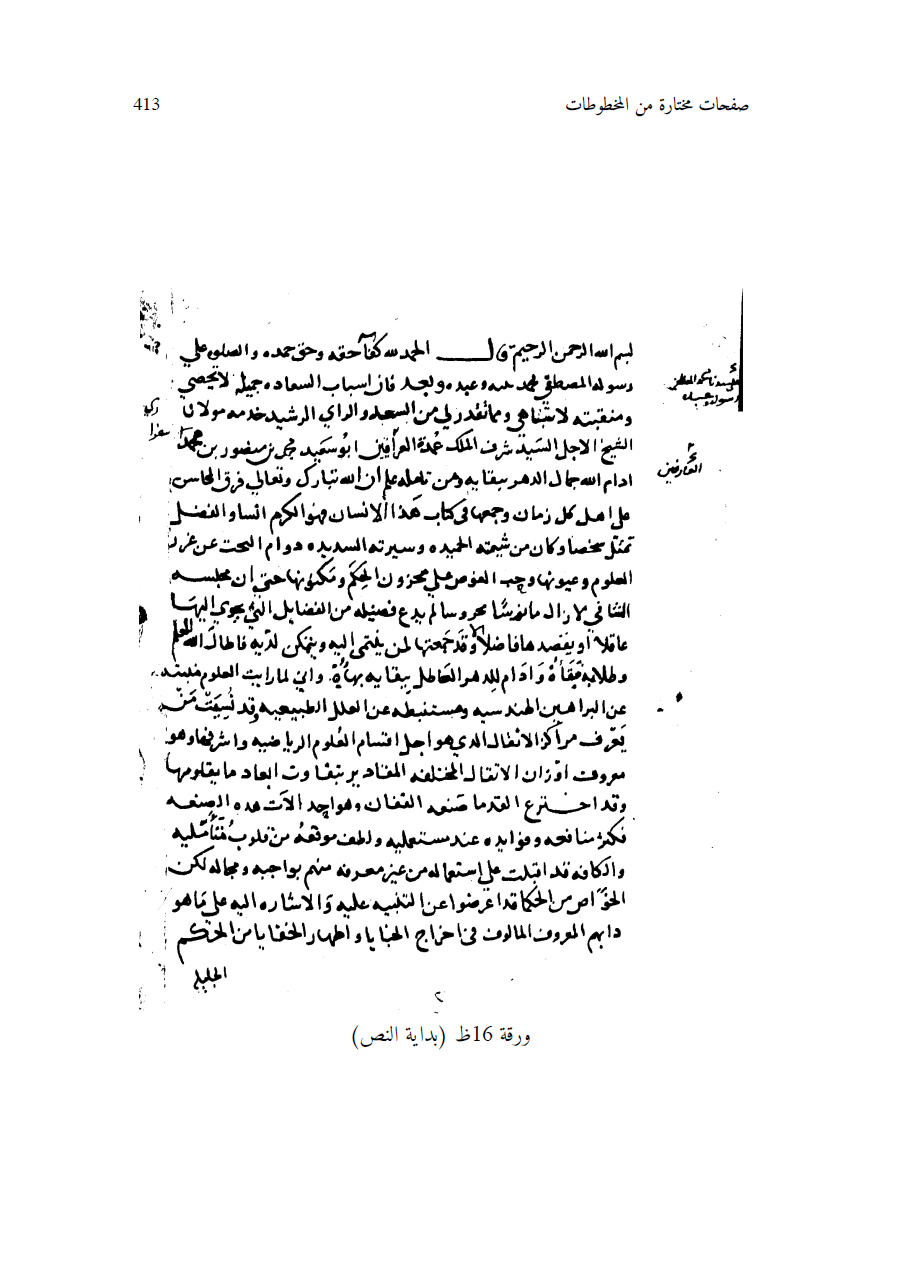 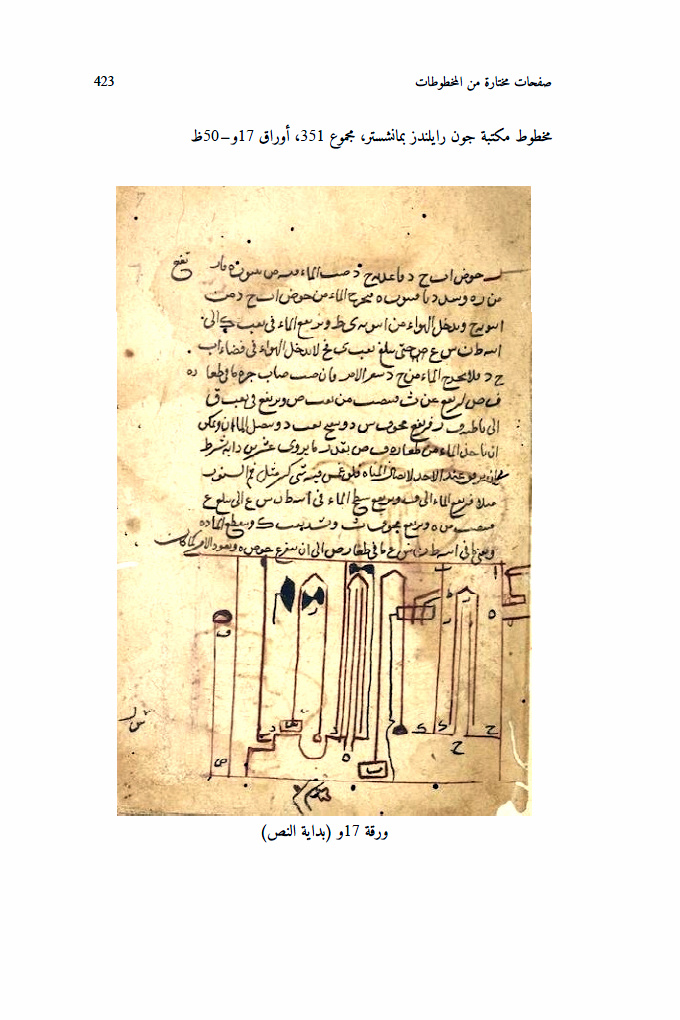 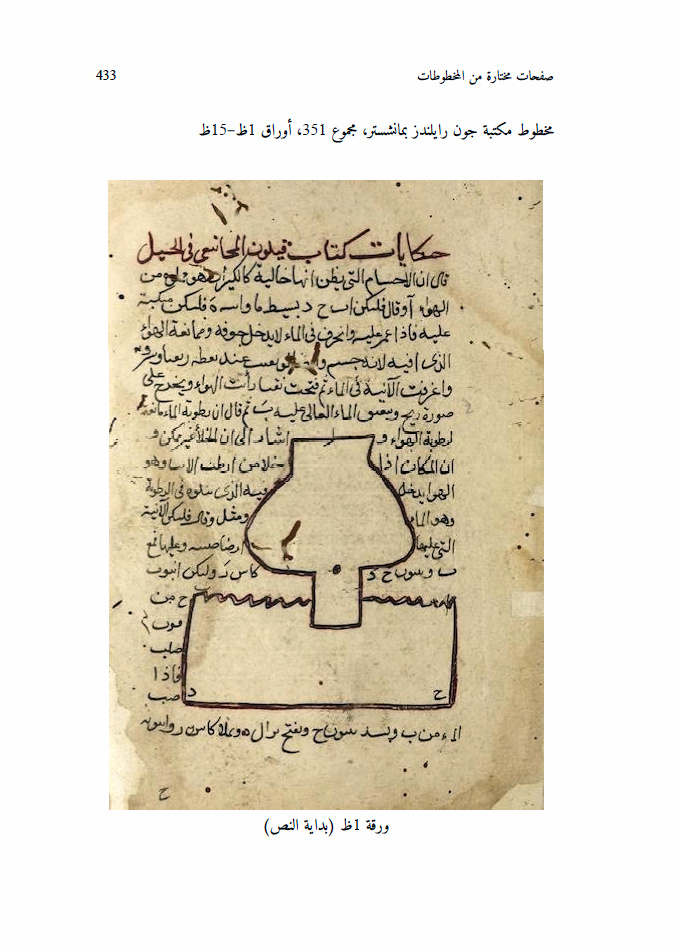 Fig. 12a-c: Samples of pages of the various manuscripts used in the critical edition, published in the book’s appendixes
respectively on pp. 413, 423, 433. 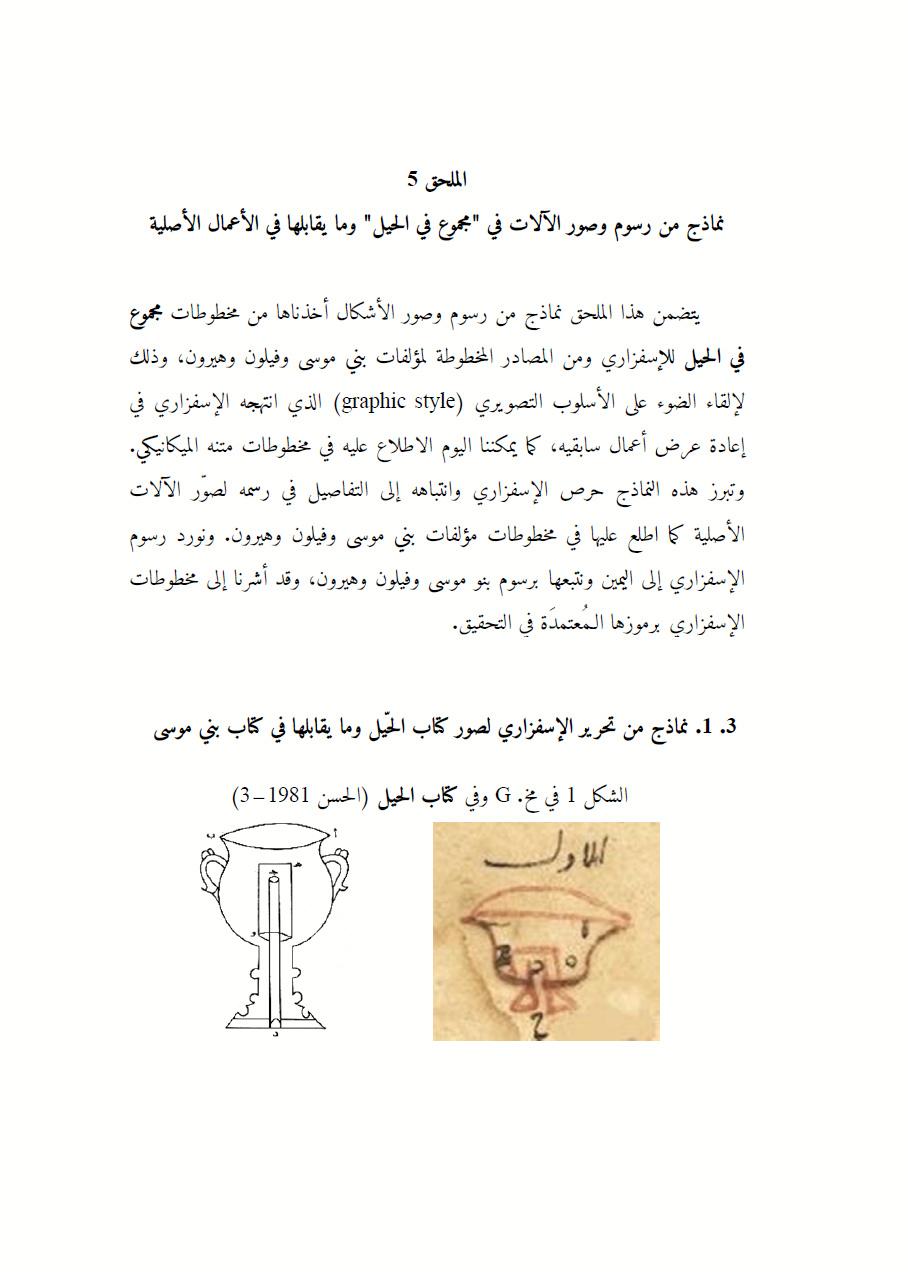 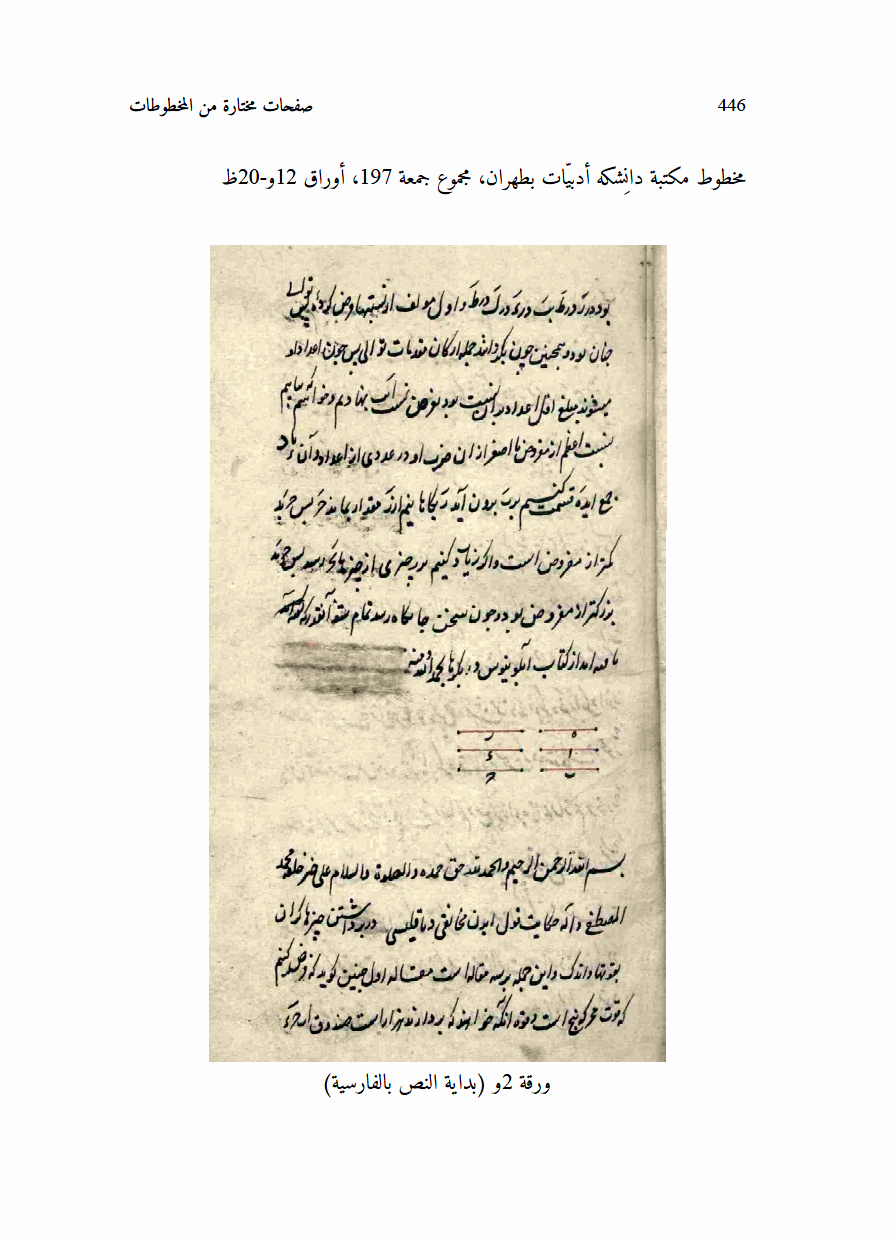 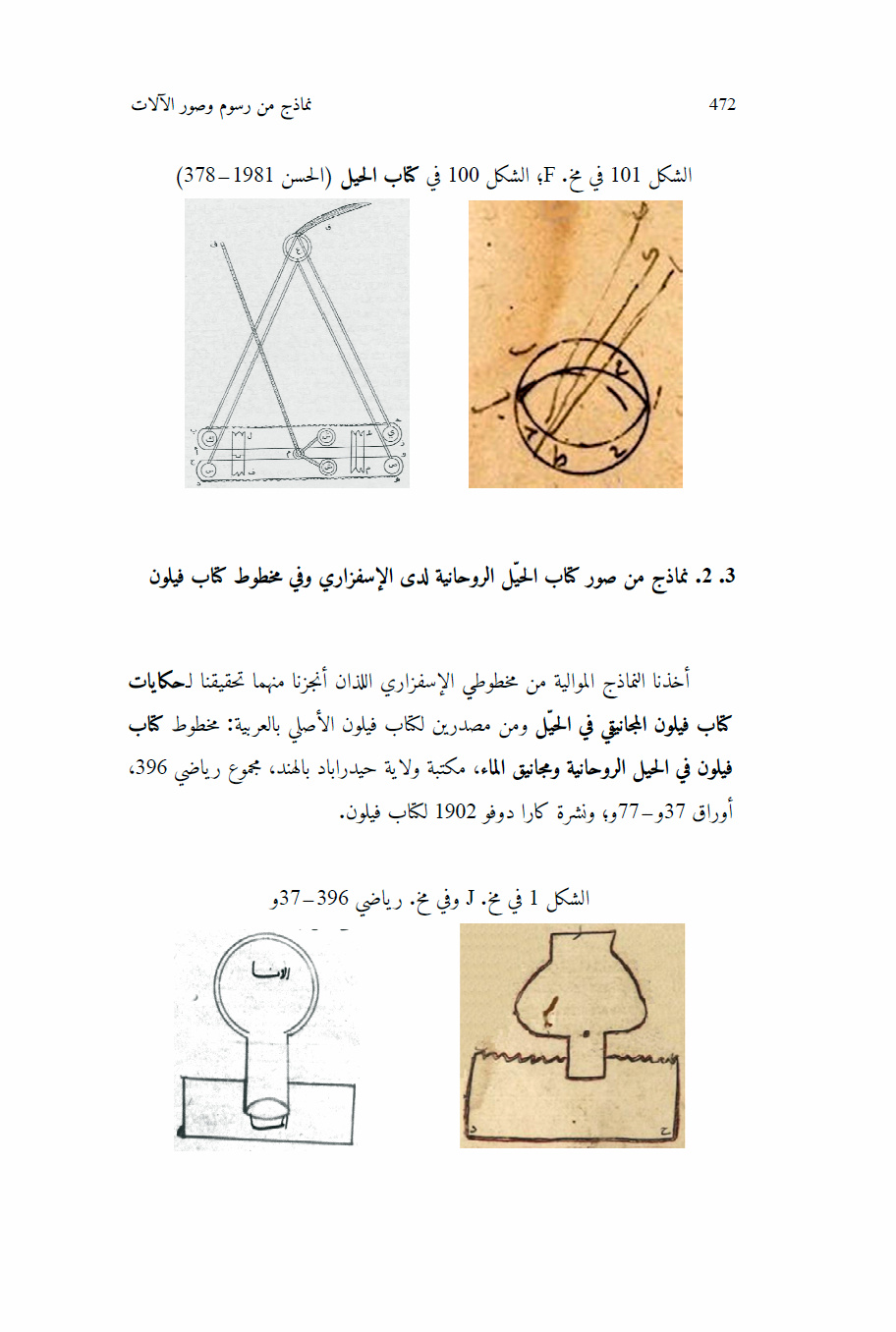 Fig. 13a-c: Samples of the original drawings of Al-Isfizari’s machines and their reconstruction in the critical edition, published in the book’s appendixes respectively on pp. 464, 466, 472. 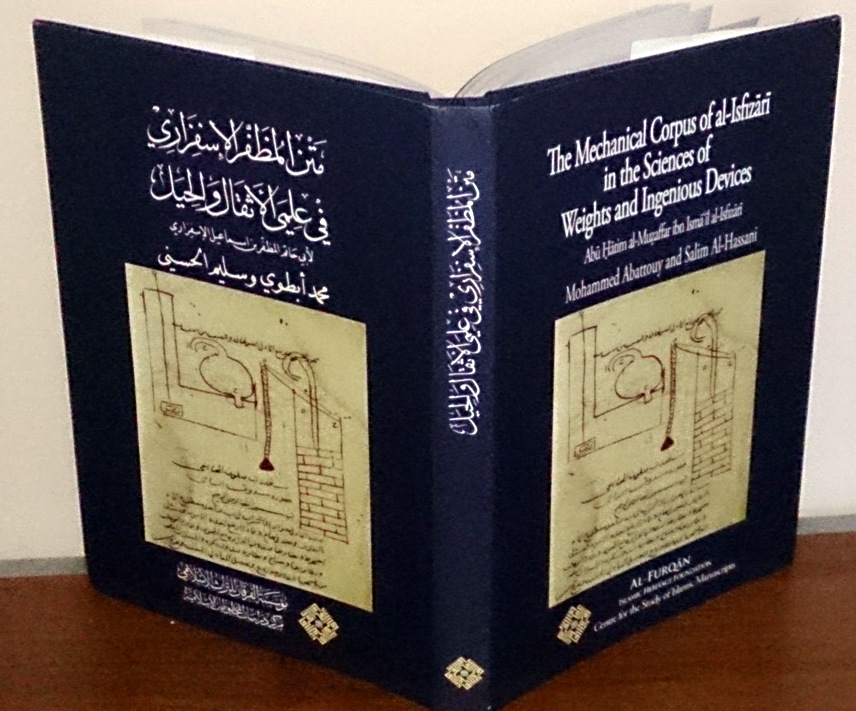