The Aghlabids ruled Tunisia and an area that included Sicily and temporarily Sardinia and regions of southern Italy. Here the role their capital city Qayrawan is highlighted for its important legacy. 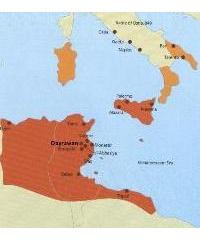 Extracted from the full article:
Al-Qayrawan (Tunisia) by Salah Zaimeche

It was under the Aghlabids (800-909) that Al-Qayrawan underwent considerable expansion and reached the zenith of its prosperity; [1] and whatever legacy it has left to history dates from its Aghlabid period. The Aghlabid rulers vied with each other in enriching the city with rich monuments and multiplied the works of public utility.[2] Ibrahim Ibn Ahmad (876-7) built a palace celebrated for the purity of its air, a castle around which grew up an important town with bazaars, baths, and large parks and gardens. [3] The Aghlabids, most importantly, left great engineering works, such as the huge water storage basins, a number of aqueducts and bridges, various water works, and the complex sewage system. [4]

One such remarkable work was the reservoirs, one of which al-Bakri describes:

`is circular in form and of enormous size. In the centre rises an octagonal tower covered by a pavilion with four doors. A long series of arcades of arches resting one upon the other ends on the south side of the reservoir.’ [5]

These reservoirs are by far some of the most original ever to be erected, and done good justice by the lengthy (about 270 pages) account of them by the French historian Solignac.[6] Solignac corrects in fact one of the greatest fallacies of history, for these reservoirs, due to their high aesthetics and remarkable engineering skills, and like many other Islamic achievements,[7] were attributed, despite all evidence,[8] to both Phoenicians[9] and Romans;[10] obviously too advanced to deserve a Muslim authorship. Such erroneous views were adopted by a number of Western `scholars’ until modern archaeological excavations and advanced studies proved the Islamic origin of such structures.[11] These reservoirs have two basins, one used for decantation, one as a reserve, and at times a third one for drawing water out of it.[12] Other than their impressive numbers, over two hundred and fifty in the region, such reservoirs also offer a great attraction in their form and structure. The photograph of such the `Basin des Aghlabides,’ (The Reservoir of the Aghlabids) built in the ninth century by Abu Ibrahim Ahmed reveals, was indeed a sort of temple of water which, it is hoped, is still preserved in its majesty.

One of the glories of Islam, to be found in Al-Qayrawan, and not owed in its founding to the Aghlabids is the large mosque. Al-Qayrawan mosque, also known as Jamii Uqba built sometime between 670 and 680 by Uqba ibn Nafi, the founder of the city of Al- Qayrawan.[13] It is the first mosque in the Maghrib, several times rebuilt and lavishly embellished in the course of centuries. [14] There is a very large and very instructive account on the edifice as well as of the city of Al-Qayrawan in the excellent study by Saladin dating from early in the twentieth century.[15] The great mosque could rival the most famous monuments of the East. [16] And once more, it was under the Aghlabid that it witnessed its glory, the mosque being rebuilt by Zyadat Allah, who set up in the prayer hall the multitude of splendid columns, rich panelling of glazed tiles and ornamentations of sculptured wood. [17]

Malik, who died in 795, considered Al-Qayrawan, together with Kuffa and El-Medina, the three capitals of Muslim sciences and learning. Yahia Ibn Salam al-Basri (745-815) composed and taught there his tafsir; Assad Ibn al-Furat (759-828) made a synthesis of teachings of all his masters.[18] The city was a great centre of learning, where the study of Maliki law was particularly honoured; and it had celebrated professors like Asad b. Al-Furat, Ibn Rashid, and Sahnun (ca.777-854).[19] But it was, once more, under the Aghlabids, in 845, that al-Qayrawan became one of the main cultural centres of Islam, attracting students from all parts, including Muslim Spain.[20] At the end of the 9th century, still under Aghlabid rule, a Bayt al-Hikmah (House of Wisdom) was established there rivalling its counterpart in Baghdad in the study of medicine, astronomy, engineering and translation.[21] As in the rest of the Muslim world, intellectual debate raged at al-Qayrawan, mostly around religious and issues of jurisprudence.[22] Public education and al-Qayrawan were deeply entwined and women actively participated in the pursuit of learning there, and scholars, reigning monarchs and men from all walks of life seem to have supported eagerly the library of their town’s grand mosque.[23] Long, before al-Tabari, Yahyia b. Sallam al-Basri (741-815) was writing there and taught his Tafsir, which has been partially preserved. Just as at the Zautuna, at Al-Qayrawan university, alongside the Qur’an and jurisprudence were taught grammar, mathematics, astronomy and medicine.[24] The study of medicine was well represented by Ziad. B. Khalfun, Ishak B. Imran and Ishak B. Sulayman.[25] Their works were translated by Constantine The African in the 11th, and were taught in Salerno (to become subsequently one of the first European universities, with a specialisation in the study of medicine.)

The rich collection of manuscripts assembled in the mosque university date from this period. [26] During his investigation at Qayrawan Mosque, Shabuh unearthed a catalogue which was compiled in 693 AH /1293 CE, and which is quite detailed in its description of the contents of the mosque.[27] The Great Mosque has preserved some of the remnants of its great intellectual apogee and memory of its scholars through books and documents they wrote in their own hands, or that they assigned others to write.[28] These documents, which included unique cultural data, formed part of the curriculum taught at the great mosque then.[29]

The collection in the ancient library of Qayrawwan is in large part written on parchment, and is the largest and best known collection in the Arab Islamic world.[30] In Qayrawan, the manuscripts were endowed to students by those who sought Allah’s favour and His pleasure with them, as was recorded on many such manuscripts.[31]

Mosque libraries, of course, contained to large extent books on religion, jurisprudence and language, but they also included large numbers of scientific works, and manuscripts no-one suspected they would possess. Abd al-Wahab located at the Qayrawan’s Atiqa Library an Arabic translation of Tarikh al Umam al-Qadima (history of Ancient Nations), which was written by Saint Gerome sometime prior to his death in 420.[32] Also, in the same mosque library, the same Abd al-Wahab states that it holds works such as Pliny’s on botany which was translated from Latin.[33]

A venerated sanctuary, and capital of a powerful state, Qayrawan was also a great commercial city, the shops of the merchants stood on either side of a covered street about two miles in length. [34] Al Qayrawan was greatly reputed for its carpets woven by the city’s women on about a thousand handlooms.[35] The typical carpet of al-Qayrawan is described as made of a large bordure formed of parallel stripes, each made of a repetitive floral pattern, highly geometrical. Within this bordure is a large rectangle whose middle is occupied by a hexagon: the Kamra, whose four angles release further motifs. The wools used for such carpets are dyed with natural colourings. The Al-Qayrawan carpet has remained according to tradition, a produce made solely by women’s hands.[36]

Not surprisingly, under the Aghlabids, it was that Islam expanded from the Maghrib in direction of the Mediterranean islands, Sicily, above all, and in this the city of al-Qayrawan, playing the leading part. The Aglabid ruler, Ziyadat Allah I (817-38) pursued a policy, granting al-Qayrawan the first role in the expansion of Islam, just as Okba did centuries before him. He carried the dynasty’s prestige to its highest, and set about a policy of Muslim expansion around the Mediterranean.[37] In 827 the mounted Muslim expedition succeeded in establishing a long term foothold on the island of Sicily.[38] From their base in Mazara, on the west coast, taken in 827, the Muslim force of ten thousand men moved forward.[39] Palermo fell in 831, Messina in 843, Enna in 859, and the island was under effective Muslim control.[40] The Muslim expeditionary force was a remarkable expression of the whole character of Islam, faith and civilisation, ‘an infinitely mixed lot of Arabs, Berbers, Spaniards and Sudanese.’[41] To emphasise the religious character of the endeavour, Ziyadat Allah appointed the reputed theologian of al-Qayrawan, Asad Ibn al-Furat, as the supreme commander of the expeditionary forces.[42] This course was systematically followed by his successors who bore Muslim arms as far as Rome. [43]

[7] A list that includes Arabic numerals, the invention of the pendulum, the use of the compass in navigation, the vaulted arch in construction, blood circulation, and so on and so forth, all attributed to various sources other than Islam despite all evidence in favour of the Muslims. On the other hand, acts such as slavery, the burning of the famed Library of Alexandria, the persecution of scholars, etc, are all, without hesitation attributed to the Muslims.