By far the most multi-ethnic culture and civilisation that had ever existed, the Muslim Scientific community included Jews and Chrisitians. 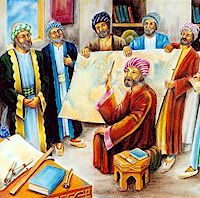 Summarised extracts from a full article:
An Introduction to Muslim Science by Salah Zaimeche

Unlike their successors and some of today’s `historians’, the Muslims never denied the contribution of other races and peoples to the rise and spread of science.

Science and learning have been recognised in earnest by the Muslims that they were not the God given gifts to one race or entity, and that instead all nations and creeds and colours shared in genius and creativity. The prophet (PBUH) himself stated the crucial role of China when commanding Muslims to seek knowledge. Muslim scientific intercourse with other people, the Chinese, above all, but also the Indians, the Africans, the local Europeans people, the Jews and all others dwelling on their lands never ceased. Many of the scientists under Islam have nothing Muslim about them.

Thus, some of Islam earliest and most prominent scientists at the Abbasid court, Ishaq Ibn Hunayn and Hunayn Ibn Ishaq were Nestorian Christians. Thabit Ibn Qurrah, the astronomer, was a Sabean. The Bakhishtu family who held most prominent positions in the court in the ninth century were Christians, too. So were the historian-physicist Abu’l Faraj; Ali Ibn Ridwan, the Egyptian, who was the al-Hakem’s Doctor; Ibn Djazla of Baghdad and Isa Ibn Ali, another famed physicist; and so on. Yaqut al-Hamawi, one of Islam’s greatest geographer-historian, was of Greek antecedents, and so was Al-Khazin (the champion author of the Balance of Wisdom).

The Jews had the most glorious pages of their civilisation under Islam, too. To name just a couple, Maimonides (philosopher-physicist) was Salah Eddin Al-Ayyubi’s doctor, and Hasdai Ibn Shaprut, followed by his sons, held some of the most prominent positions in terms of learning and power in Muslim Spain. The Ben-Tibbon family were the ones who played a most prominent role in scattering Islamic learning in all provinces other than Spain (such as the South of France).

Nearly all Muslim envoys to Christian powers were Jews; and about all Muslim trade was in the hands of the Jews, too. Moreover, amongst the Muslims, only a number of such scientists were Arabs; most were instead Turks, Iranians, Spanish Muslims, Berbers, Kurds… thus a myriad of people and origins brought under the mantel of Islam, a religion open to all who sought to, and excelled in learning.

That was the first and by far the most multi-ethnic culture and civilisation that had ever existed, not equalled in many respects, even today; not even in countries and institutions which keep advertising their equal opportunity status.