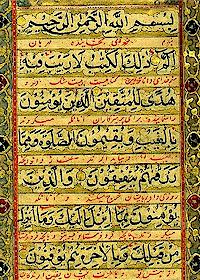 Summarised extracts from a full article: Islam and Science by Salah Zaimeche

“Read: In the name of your Lord Who creates, creates man from a clot. Read: And your Lord is the Most Bounteous, Who teaches by the use of the pen, teaches man that which he knew not.” Quran 96:105

The Quran, itself, as seen by some eminent scholars, is so rich depository of science, prompting Bucaille to state that knowledge of science of an `encyclopaedic’ range is needed to assess such vast scientific wealth.(endnote 19) Bucaille also states that whilst the Quran contains so much of the scientific, it is also impossible for the scientist to find inconsistencies in it, in contradiction of science. And whilst scientific truths are very regularly questioned, and abandoned, the truths in the Quran are permanent and unchangeable. Thus it is said under the heading Verses Containing General Statements are verses that are intended to lead `man to meditate on the Beneficence of God towards His creatures,’ and include also statements that are relevant to modern science. Thus in:

(sura 2, verse 22):
“(God) is the One who made the earth a couch for you and the heavens an edifice, and sent down water from the sky. He brought forth therewith fruits for your sustenance. Do not join equals with God when you know.”

(sura 2, verse 164):
“Behold! In the creation of the heavens and the earth,
In the disparity of night and day,
In the ship which runs upon the sea for the profit of mankind,
In the water which God sent down from the sky thereby reviving the earth after its death,
In the beasts of all kinds He scatters therein,
In the change of the winds and the subjected clouds between the sky and earth,
Here are Signs for people who are wise.”

(sura 13, verse 3):
“(God) is the One who spread out the earth and set therein mountains standing firm and rivers. For every fruit He placed two of a pair. He covers the day with the night. Verily in this there are Signs for people who reflect.”

(sura 20, verses 53 and 54):
“(God is) the One Who has made for you the earth like a cradle and inserted roads into it for you. He sent water down from the sky and thereby We brought forth pairs of plants, each separate from the other. Eat! Pasture your cattle! Verily in this are Signs for people endued with intelligence.”

(sura 79, verses 30-33):
“After that (God) made the earth into a spheroid. Therefrom He drew out its water and its pasture. And the mountains He has anchored. Goods for you and for your cattle.”

In these verses is shown the role and benefit of water in sustaining life on earth. The reference in the Qur’an however, as is pointed out by the author, goes far beyond this geographical detail.

“According to scientific knowledge the character the Earth has of a planet that is rich in water is unique to the solar system, and this is exactly what is highlighted in the Qur’an. Without water, the Earth would be a dead planet like the Moon. The Qur’an gives first place to water among the natural phenomena of the Earth that it refers to. The water cycle is described with remarkable accuracy in the Qur’an. When the verses of the Qur’an concerning the role of water in man’s existence are read in succession today. they all appear to us to express ideas that are quite obvious. The reason for this is simple: in our day and age, we all, to a lesser or greater extent, know about the water cycle in nature.”

The Scholars of Damascus