Although Muslim architecture has been investigated by both Muslims and non Muslims, it still remains omitted from main stream architecture theories and much of existing works are no more than curiosities undertaken by a group of sympathisers. 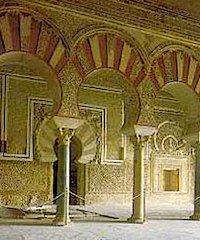 Although Muslim architecture has been investigated by both Muslims and non Muslims, it still remains omitted from main stream architecture theories and much of existing works are no more than curiosities undertaken by a group of sympathisers mostly Orientalists.

Here, the notion of Islamic architecture has been associated with Muslim monuments such as mosques, palaces, and castles. Some of these such as Briggs (1924) called it Muhammedan; a name Muslims take much objection to as it implies that Islam was started by Muhammed (pbuh) and not a continuation of God’s message revealled to all Prophets before him. Sometimes, it is denoted as Saracenic, a crusaders name for the Muslims.

In some textbooks, we find deliberate silence, an example of this is Simpson’s book, one of early key references of History of architecture. This 3 volume work, used as a major reference in western universities, touched upon the architecture of most nations but jumped from Sassanian and Byzantine architecture (4th and 5th century AD) to European Medieval architecture of the 11th century (Romanesque), ignoring some 500 years of Muslim architectural achievement (700-1200).

Hope (1835) provided a chapter on Islamic architecture entitled: “Derivation of the Persian, Mohammedan, and Moorish architecture from that of Byzantium”. The title clearly demonstrates why Hope referred to Islamic architecture. Meantime, publications referring to it often present a shy coverage. Kostof (1994), for example, gave it a mere 8 pages with 5 figures in his 800 pages work.

Furthermore, there are views circulating in the West which reject the “islamisation” of architecture arguing that Muslim architecture was used by Orientalists only to differentiate it from other types of architecture. This prejudice is often argued by the misconception of Islam’s reluctance to building and urbanisation which circulates among some Western scholars. They propound that the nomadic lifestyle of the Arabs discouraged any form of permanent settlement and thus any architectural or building tradition. Much of the building heritage of what is called Islamic architecture, they claim, came from Christian, Persian, or Indian origins and Muslims only imitated and sometimes employed masons from these cultures.

The answer to these arguments involves the following three main issues:

From the above, it appears clearly that despite the fact that early arabs lived a nomadic lifestyle which discouraged buildings, Islam has no objection to building and urbanisation. On the contrary it requests the sons of Adam “to work and settle Earth if they are to fulfil their main divine purpose, as Allah’s entrusted servants (Khalifs)”. As for borrowing from other cultures, we find the argument endorsing the universal concept of the message of Islam. Islam’s accommodation and tolerance to other cultures have been its strongest point: “There is no difference between An Arab (Muslim) and a non Arab except by Piety” declares the Prophet (pbuh). “Believers are but brethern” adds the Quran (49:10). In no other part of the world was the population so diversified, yet united, than in the Muslim World. This is the secret of the success story of Muslim art, architecture, science and technology of the Middle ages. Its expansion over a vast territory, incorporating three continents, provided a cultural richness that played a significant role in the elaboration of Muslim art and architecture.

Converts from Christian, Persian and Indian origins enthusiastically redefined their knowledge, as well as their experience in arts, industry and various accomplishments of their respective nations, to conform with Islamic values and injected it into their new world. Muslims were not blind imitators but “were content to adopt each local style that they found, modifying it mainly in distinctive ornamental details, but also introducing several important new features of plan and structure” (Fletcher, (1961, p.1226). On the other hand, early imitation or sometimes adaptation of non-Muslim buildings was deliberate, as these buildings were often communal centres for pagan societies.

The early introduction of a completely alien architecture was not desirable as Islam remoulded existing traditions and built on them the new value and life systems. So, these centres which played important community roles in ignorant pagan times, provided new enlightened rays of the new belief. The early use of churches in Syria and Spain, and temples in Persia and India is evidence of these attitudes. According to H. Saladin (1899), the plan of the mosque was derived from older Semitic sanctuaries. Muslims have always maintained that Islam is a purification and renovation of Allah’s old religion revealed to previous Prophets Ibrahim, Moses and Jesus (pbuh). The building of mosques and diffusion of the new architecture did not take place until Islam became established in that community or region. For example, in Spain and Sicily Muslim architecture clearly showed no connection with existing Visigoth and Lombard/Byzantine building cultures.

As Islam took firm roots and a degree of economic and cultural prosperity was reached, unique core architectural features, forms and techniques evolved. Such factors became distinguishing features of Muslim and Islamic architecture. Similarly, the existence of other elements unique to Christian or Japanese architecture would define their building style.