Msatta is a renowned Ummayad palace with spectacular architectural and artistic details that continues to attract many. The decorative aspects of the Palace are of immense detail and splendour and thus has become an important source of information for oriental studies of Muslim art and decoration. 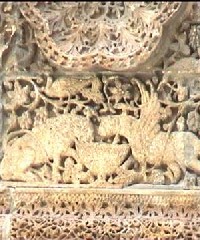 Mshatta, renowned as one of the largest and most impressive of all the Umayyad palaces, was built by Caliph al-Walid II in 744CE in the Jordanian desert. Despite its short lived splendour, as it was abandoned before it was fully completed, the palace has never ceased to attract the attention of archaeologists and researchers as well as tourists. The main feature of this once great edifice was the façade of its main portal, a section of which is kept in the Pergamon Museum in Berlin where it became an important source of information for oriental studies of Muslim art and decoration.

The absence of any inscription or literary information referring to the exact date of the foundation of the uncompleted palace of Mshatta raised speculation about its owner and the circumstances surrounding its desertion. However, by comparing some of its architectural and artistic details and the type of materials employed with other monuments of the region academics are becoming increasingly confident in relating it to the work of Caliph Al-Walid II who started its construction some time before 744 CE. These sources also related the account reported by Ibn al Muqaffa in 744 that Caliph Al-Walid had “collected workmen from all quarters” for the construction of Mshatta. Furthermore, many of his reported royal activities, e.g. the audiences he has given in a vast hall, his ascension to the summit of the building which dominated the camp of his guards and many others, also point towards the Mshatta palace[1].

In relation to the reasons behind the desertion of the palace it seems the events occurring in the period around 744, relating to the rise of the Abbasids and the war they fought against the Umayyads forced Al-Walid to abandon the palace and eventually he was assassinated[2].

With this history, Mshatta becomes one of the earliest palaces known in Islam, although not earlier than Dar al-Imara built in 638 CE by the Emir Saad ibn Abu Waqqas in Kufa or the palaces built by the ancestors of Al-Walid II such as Hauravin (680-4), Qasr Burku (700)[3] and Kastal[4] which once were thought to be pre-Islamic. However, these palaces were all but completely lost without a trace.

Architecture of the Palace

Mshatta, about 32 km south of Amman, Jordan, was first discovered by Layard in 1840[5]. The palace was set within a square enclosure, heavily protected with stone buttressed enceinte. The preserved parts of the wall reveal that it was between 3 and 5.5m high with semi-circle towers inserted at intervals in similar fashion to those seen in many earlier as well as later palaces [6]. Some scholars such as Creswell claimed that the adoption of such fortified buttressed enclosures for Muslim palaces in usually safe territory, far from an unstable frontier, is merely an imitation of the Roman limes or frontier forts which the Umayyads had occasionally occupied on the army route during their advance towards the East [7]. Mshatta is thereby wrongly accused of being no more than an emulation of a late Roman castrum [8].

The entrance of the palace is found at the centre of the southern section of the wall framed by two polygonal towers resembling the dispositions made at palaces of Qasr al-Hair al-Gharbi and Qasr al-Hair al-Sharqi although the latter have circular towers.

Within the enclosure, the palace emerges as three parallel strips of land; the central one represents the built part of the building complex while the two side ones were left undeveloped following the abandonment of the palace. The central built strip was developed into two symmetrical sections; the first was not completed and comes immediately after the entrance gateway which Creswell names as the Gateway Block [9]. The second section is located at the northern end, on the same axis of the entrance block, consisting of the throne room and its corresponding structures. A large courtyard connects the two.

Immediately after the entrance, there was a hall leading into a comparatively small courtyard which was thought to contain a series of arched recesses all round, resembling the Court of Honour at Ukhaidir[10]. Flanking this court from the west is a set of living quarters consisting of a number of rooms arranged around smaller courts. These may have been intended for the guards, dignitaries and royal entourage. As customary practised, the palace mosque was located to the right (east) side of the entrance with the concave of its Mihrab appearing on the southern wall indicating the direction of the Qibla.

Beyond the entrance hall and its court, one proceeds to a massive courtyard extending over an area over 57 m square. On its northern side is a triumphal triple-arched entrance leading to the northern built section of the palace, which Creswell named the Main Building. The three arches thought to be semi-circular rose on four piers, two of which were free standing. The central arch, as expected, was the largest having a span of more than 6.5 metres. The façade was decorated with moulding defining the shape of the arches within the rectangular frame of the entrance. Three rosettes, resembling those found on the exterior façade (see below), decorated the frame above each of the side arches giving the gateway an extra splendour.

As anticipated, the building compound behind the above entrance formed the most prestigious part of the palace which was fully built symmetrical to the Gateway Block. This royal structure consisted of a 21m long vaulted tripartite hall which was laid out immediately behind the triple-arched entrance. Continuing on the same axis there was the throne room, a medium sized area covered with a brick dome and flanked from three of its sides by three apses at right angles. The apses were canopied by semi-circular half domes. Recent excavation in the Dar al-Imara has revealed the presence of a similar design scheme involving the triple aisled hall leading to a domed chamber with a door in each side.

In addition to the above, the remains of Mshatta reveal the presence of four compounds, each comprising a number of barrel-vaulted self-contained suites of rooms arranged around oblong courts and lighted by pairs of oculus windows. These were most likely designated for the royal household’s domestic use, probably accommodating the harem and the extended family of the Caliph[11].

Decorative Aspects of the Palace

As much of the construction work was not completed, little decoration was executed although several blocks of a magnificent green stone were found lying in the eastern side which can only suggest that they were intended for decoration[12]. Nevertheless, the art work applied to the façade of the main entrance may provide a good insight of the general theme of what was meant to be. Specimens of this decoration are found on a large section of the façade which was gifted by the Ottoman sultan Abdelhamid to Kaiser Wilhelm, now preserved at the Pergamon Museum in Berlin. The decoration consisted of stone carving executed above the socle which was left plain. Immediately above, there is a base of more than one metre (1.28m) in height, richly decorated with moulding made of pairs of interlacing vine-stalks which form loops; each loop includes a vine-leaf rising upwards paired with a bunch of grapes hanging downwards resembling a specimen found on one of the tie-beams of the Dome of the Rock[13]. Above this base, the wall surface incorporates beautiful triangular panels of up to 2.85m in height arranged up and downwards forming a big zigzag. At the centre of the triangles rosettes alternate between octagonal shapes for inverted triangles and hexafoil for upright triangles. Inside the rosettes are series of radially disposed combinations of lotuses and pinecones, while the remaining background surface was densely carved with interwoven vines and groups of animals and humans. The most prestigious of these animals are those of heraldic character such as griffins, lions and oxen which were combined with other mythical motifs, such as a cupid bending over a basket of grapes, a dog-bird and human-headed lion to express power and wisdom.[14] Sources indicate that the origin of much of these mythic and iconographic figures is Sassanian and Coptic respectively; thus the contribution of Persian and Egyptian craftsmen in the building and decoration of the palace is, without a doubt, significant.