The Muslim influence on musical theory is strongly denied by Western scholars. Even those who accept the Muslims playing some role, reject their deep involvement with the theory,although the Muslims used notation in musical theory as early as the ninth century.

Extracted from the full article:
The Arab Contribution to Music of the Western World by Rabah Saoud

The Muslim influence on musical theory is strongly denied by Western scholars. Even those who accept the Muslims playing some role, reject their deep involvement with the theory, limiting it to instruments only. The first to suggest the contribution of Muslim scholars and artists to musical theory was a French scholar named Laborde. In his book “Essai sur la Musique ancienne et moderne” (1780), pp.8-9, p.22, he attributed the alphabetic notation of musical notes to Muslims. The notation, which consists of the syllables (known as solmisation); do, re, mi, fa, sol, la and si, is widely known as Latin, borrowed from the syllables of the Hymn of St. John. The Italian musician, Guido of Arezzo (c.995-1050) is the one who is credited with its invention in 1026. A recent British Channel 4 programme on the history of music claimed that Guido was the inventor of such a system, failing to refer to any Muslim involvement[1]. However Villoteau, (d.1839)[2] took the position of Laborde, admitting the Muslim influence on the theory of music. From comparing Guido’s music scale with that of the Muslims, he found striking resemblances which led him to believe that the former had adopted his theory from the Muslims. He commented[3]: “according to all appearances it is this latter which served as the model for that of Guido of Arezzo“.

Farmer in his monograph provided detailed analysis and critics of such views credibly demonstrating the Muslim origin of the use and invention of the notes. The phonetic similarity with the Arabic alphabet is striking:

The Muslims used notation as early as the ninth century at the time of Al-Ma’mun (d.833) and Ishaq Al-Mausili (d.850). We find it in the works of Al-Kindi (d.874), Yahia Ibn Ali Ibn Yahia (d.912), Al-Farabi (870-950), Ibn Sina (d.1037), Al-Hussain ibn Zaila (d.1048) and many others. We find Dominucus Gundissalinus (d.1151) used Arabic texts for his musical definitions. The Count Souabe Hermanus of Reichenau was particularly interested in the works of Al-Kindi and his musical theory and system of notation. The musical works of both Avicenna and Averoes were also influential on European music (as were their works in medicine) particularly in Provence[4] and Montpellier[5]. The works of Al-Farabi were influential on European musical theorists as recent as the eighteenth century, teaching le rapport 5/4 (major tierce) and 6/5 (minor tierce)[6].

But how did Guido know about Muslim work?

Soriano[7] revealed that Guido had studied in Catalogna. Hunke[8] established that these Arabic syllables were found in an eleventh century Latin treatise produced in Monte Cassino, a place which had been occupied by the Muslims a number of times, and was the retiring place of Constantine Africanus, the great Tunisian scholar who migrated from Tunis to Salerno and then to Monte Cassino. The role of Christian scholars who spent some time studying in the land of Islam is also an important factor. It is widely known that music was taught in Andalusian colleges. Ibn Farnes (d.888) was the first to introduce it as an integral part of the department of the quadrivium. Zariyab (789-857) was also renowned for his teaching of music in Spain as well as for his establishment of the first conservatory in the world. 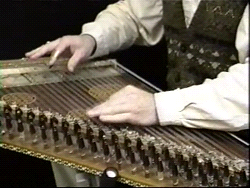 Evidence shows there at least one scholar who, acquiring a vast knowledge of musical art forms from the Muslims, taught in European circles. Gerbert of Aurillac (later Pope Sylvester II) (d.1003), known for playing a very important part in the renewal of scientific thought in Europe, was also influential in disseminating Muslim musical knowledge, including their musical theory, in Europe. He studied in Andalusia and was nicknamed the Musician[9]. Gerbert also taught the quadrivium which consisted of the four subjects in the upper division of the seven liberal arts: arithmetic, astronomy, geometry, and music. Gerbert taught Arabic numerals; evidence of this is found in “Cita et vera divisio monochordi in diatonico genere“, a work of Bernelius (c 990), his former pupil, which contained the Arabic numerals[10]. This teaching was soon spread abroad by Gerbert’s pupils Bernelius, Adalboldus (d.1027) and Fulbertus (d.1028). These numerals are also found in Pseudo-Odo of Cluny (d.942) in a tract entitled “Regulae Domni Oddonis super abacum“. Odo of Cluny, in discussing the eight tones, referred to Arabic and Jewish names including buq, re, schembs and so on[11]. Meanwhile, Fulbertus is known to have taught in Chartres. Musical knowledge must have taken similar courses.

The contribution of translators and their translations were influential, particularly since the twelfth century. We find Muslim musical ideas, like the rest of subjects, appearing in many works. Ideas such as those of Al-Farabi (Alpharabius) and Ibn Sina (Avicenna) were translated into Latin and borrowed by Vincent de Beauvais (d.1264), Pseudo Aristotle (c.1270), Roger Bacon (d.1280), Walter Odington (c.1280), Jerome of Maravia (13th century) .

Latin translations of Ihsa’ Al-Ulum of Al-Farabi was influential in Latin compilations and treatises. In the mid ninth century Aurelian of Rome, who is considered to be the first musical theorist with Remi of Auxerre, mentioned a new musical theory of eight tones, although he claimed to have obtained it from Greek sources. Pseudo Hucbald, Pseudo Bernelinus and Notker Labeo (1022) all used phonetic (alphabetic) notation, a method used first by the Muslims, especially Al-Kindi (d.874). Hermann Contract (d.1054) was deeply influenced by Muslim learning. He is credited with a number of scientific works including “De mensura astolabii” and two other treatises on music[12]. In 1242 when the Christians took the Andalusian town of Murcia, a Muslim scholar Muhammed Ibn Ahmed al-Raquti, famous for his mathematical and musical writings was retained by the Christian King to teach in his schools[13].

[4] There was a Provencal translation of surgery written by Al-Zahrawi (‘Abd al-Qasim) written long before any Latin treatise.

[5] The famous Latin Arabic school of Medicine of Montpellier was founded by the Muslims teaching principally medicine of Avicenna. Since 1180 it was substituted by Averros medicine.