Aydin Sayilli (1913-1993) was an eminent historian of science whose pioneering work during a 50-year career uncovered many hidden treasures in the history of mathematics, astronomy and medicine, especially in the Islamic tradition. In this special section, we celebrate his memory and publish the list of his articles published on our web portal. 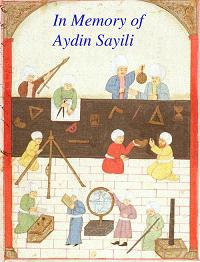 Aydin Sayilli (1913-1993) was an eminent historian of science, especially of Islamic science. His career was aided by chance when meeting with Mustafa Kemal Atatürk, whom he impressed enough to receive a state-supported scholarship to attend graduate school at Harvard, where he studied under George Sarton.

One of his biographers, Professor Ekmeledin Ihsanoglu, qualified him in the following words: “Aydin Sayili is one of the first eminent figures of the history of science in Islam to pursue an academic career in this discipline. He was fortunate to earn the first PhD from the history of science chair established by George Sarton in Harvard University. With this distinguished background, he made valuable contributions to this field throughout his life” (see Aydin Sayili (1913-1993) At Work: His Scientific Biography).

The doctoral dissertation of Aydin Sayili on scientific institutions in the Islamic civilization, completed in Harvard in 1942, was the first thorough essay on this important topic. Its chapter on the multi-faceted aspects of the observatory in the world of Islam is until now a unique example of deep investigation in which minute analysis of sources led to outstanding historiographical results.

The work of Sayili may be outlined briefly as follows:

“Aydin Sayili was born in Istanbul in 1913. His primary and secondary education took place in Ankara for the most part. After completing his secondary education, he took part in competitive state examinations and was sent by the Turkish Ministry of Education to the United States for his higher education. The program of his university education was planned and organized under the guidance of George Sarton, one of the foremost pioneers in the field of the history of science and one of the most central figures in securing for it the status of an independent academic discipline. Sayili’s training at Harvard was broad in scope with his so-called “horizontal” specialization or concentration in the history of science being in the world of Islam and his “vertical” specialization in the history of physics. He obtained his Ph.D. degree in the history of science in 1942 from Harvard University which was apparently the first such degree to be given in that discipline anywhere” (In Memoriam of Aydin Sayili: Biography and Account of his Scientific Activity).

During a long and fruitful career that span over 50 years, until he passed away in 1993, Aydin Sayili produced an impressive list of monographs exploring different areas of history of Islamic sciences and history of science at large. His work touched on the history of mathematics, astronomy, medicine, and he was interested in other different areas, one of which had attracted his attention throughout his life: setting the record for the Turkish contribution to history of science, since the time of Abdulhamid ibn Turk in the 9th century until the Ottoman period (see the list of his publications section 2 of In Memoriam of Aydin Sayili: Biography and Account of his Scientific Activity).

The list of articles by Aydin Sayili published on www.MuslimHeritage.com:

2. The Observation Well
Observation wells received much historical interest relating to observatories. In this article Prof. Aydin Sayili describes the history of “observation wells” both in Islamic and European worlds.

1. Logical Necessities in Mixed Equations by Abdulhamid ibn Turk and the Algebra of his Time
The famed Muslim scholar Al-Khwarizmi has long been known as the father of Algebra. In this article, Aydin Sayili presents an alternative view of the inception and development of Algebra in the works of ?Abd al-Hamîd Ibn Turk, a well known mathematician of the early 9th century, probably contemporary to Al-Khwarizmi. The author raises an outstanding hypothesis according to which Ibn Turk may have written the first Arabic book on algebra in Islam, and not Muhammad ibn Mûsâ al-Khwarizmi.

2. Al-Khwarizmi, Abdulhamid ibn Turk and the Place of Central Asia in the History of Science and Culture (see also FSTC: introductory article)
Abu Ja’far Muhammad ibn Mûsâ al-Khwârizmî is a truly outstanding personality and a foremost representative of the supremacy of the Islamic World during the Middle Ages. Medieval Islam was largely responsible for the shaping of the canon of knowledge that dominated medieval European thought.

2. Central Asian Contributions to the earlier phases of hospital building – Activity in Islam (see also FSTC: introductory article)
Modern hospitals find their origin in the Islamic civilization, replacing institutions known for magic and religion with a science based on tradition which took knowledge from various places including the Greeks, Egyptians, Indians and others.

4. Certain Aspects of Medical Instruction in Medieval Islam and its Influences on Europe
In this article, Professor Aydin Sayili analyses the medical teaching in the different phases of Islamic civilization, especially in the madrasa system. The network of schools covered the Islamic world from the 11th century, while the European university was developed over a century later and at a time when already Latin translations of Arabic philosophical and scientific works were available. Thus he establishes a parallelism between the features of the madrasa and the university in pre-modern Europe and stresses how the medical authorities of Islam such as Al-Râzî and Ibn Sînâ were accorded a place of honor in European medical schools.

1. Turkish Contributions to Scientific Work in Islam (see also FSTC: introductory article).
Turks have played an active part in the pursuit of science and learning in the Islamic World throughout its history. This activity is outlined here from the very formative stages of the Islamic civilization down to the present day.

2. George Sarton and the History of Science
George Sarton was a pioneer scholar who played a decisive role by his scholarship, methodology and academic career in establishing the history of science as a recognized subject in modern academia. His monumental major work in multiple volumes Introduction to the History of Science set a high standard and led the way for many others to follow. In this article, the late Professor Aydin Sayili, who was a student of George Sarton in Harvard University, scrutinizes Sarton’s contribution through his own analysis and memories, and relies on the corpus of literature produced on Sarton by historians and academics.

1. In Memoriam of Aydin Sayili: Biography and Account of his Scientific Activity
The article presents a thorough intellectual biography of the late Aydin Sayili, the well known historian of Islamic science. The second part of the article is a comprehensive list of his works. This bibliography shows the richness and variety of his contributions to the history of medieval Islamic sciences, with a special focus on astronomy, mathematics and physics, the queen sciences that established the fortune of history of science as an independent discipline in 20th century scholarship.

2. Aydin Sayili (1913-1993) At Work: His Scientific Biography
Aydin Sayili is one of the first eminent figures of the history of science in Islam to pursue an academic career in this discipline. He was fortunate to earn the first PhD from the history of science chair established by George Sarton in Harvard University. With this distinguished background, he made valuable contributions to this field throughout his life. In the following article, Professor Ekmeleddin Ihsanoglu draws a lively picture of the scientific biography of the late Aydin Sayili and points out the hallmarks of his scholarly work.