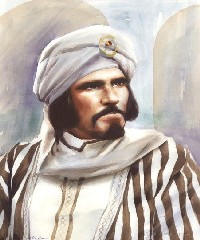 I was in the Library of the great Mosque in al-Medina al-Munawara (the Illuminated city) during my visit to Saudi Arabia for hajj (pilgrimage) when I came across a book called Al-Mujaz fi Al-Tibb [1] (A Summary of Medicine). I must admit that although I had been in the profession of medicine for more than 14 years and with my Arabic and Islamic background that this was the first time I had examined an old Arabic Islamic manuscript which dealt with the subject of medicine.

The book, which is about 500 pages, was written in Arabic yet I could not comprehend what I was reading for I had studied medicine at the medical school of Benghazi, Libya, where the subject was taught in English. Arabic for me was for poetry. Undeterred I moved to the index at the back of the book, looking for anything related to my speciality field of Ear, Nose, and Throat Surgery (Otolaryngology). There was a chapter dealing with discharging from the ear or what is called Otorrhea in medical terminology. Ibn Al-Nafis was describing different preparations and remedies which I could not fully grasp but vinegar was one I immediately recognised. Memory took me immediately back to Dublin where I did my Ear Surgery training. I remembered a day when one of my fellow Irish colleagues came out with the idea of using vinegar to irrigate the external ear for a condition called Otitis externa where there was discharge and irritation within the external ear canal. He did not claim the discovery for himself. He knew at that stage that using vinegar was an old remedy but he was not clear about the historical background.

Born in Damascus [2] as Ala-al-Din Abu al-Hasan Ali Ibn Abi al-Hazm al-Qarshi al-Damashqi al-Misri in 1213, Ibn Al-Nafis became famous for his important discovery of the lesser blood circulation, known as the pulmonary circulation. He also described the heart muscle’s own circulation known as the Coronary arteries. He said, “The nourishment of the heart is from the blood that goes through the vessels that permeate the body of the heart.” Ibn Al-Nafis left for Cairo where he started work in the Nisaria Hospital and became the dean of the Muntaseria Medical School. His work on the anatomy of the heart and circulation was only acknowledged and credited to him in the 20th Century.

This is similar to our current story about the treatment of outer ear infection using vinegar. The use of such old remedies in the modern day treatment of diseases should always be ascribed to its first describer. Ibn Al-Nafis was describing a condition similar in its symptoms and signs to outer ear canal infection (otitis externa) [3], the ear was painful and tender, slightly swollen and producing a smelly, coloured discharge. His patient had a degree of hearing impairment. The vinegar was mixed with some milk and almond paste, and slightly heated before it was introduced drop by drop into the ear canal. In another manuscript he described treating a discharging divided ear with a mix of vinegar and opiates from a poppy for the pain. In that section he divided the condition into an early stage, what we call nowadays acute and later stage known as chronic [4]. This is exactly similar to modern day classification of ear diseases.

Ibn Al-Nafis wrote several books. His best-known work is Mujaz Al-Qanun which was an explanatory and complementary book to Avicenna’s Al-Qanun book. Ibn Al-Nafis died in Egypt in 1288 CE.

I do not think that Ibn Al-Nafis would have know that vinegar works by restoring and maintaining a low pH and hence an acidic environment which is not suitable for bacteria and fungus growth [5]. In his days, microorganisms like bacteria had not been discovered yet. Treatment was based on careful observation and trials.

Today vinegar is administered either as a diluted solution alone or as a salt in combination with antibiotics and mild local steroids. There are more preventive roles for vinegar in ear disease [6]. People at risk of developing this condition, like swimmers, are advised to prophylactically use a home remedy of white vinegar, 70% isopropyl alcohol and water [7]. One to two drops in the ear canal are used after exposure.

Vinegar can be prepared from any material containing sugar. There are two stages in this process. The first is to utilise yeast, this is called alcoholic fermentation. The second is acidic fermentation which utilises bacteria called acetobacter hence the name acetic acid. Ibn Al-Nafis explained the contents of vinegar in very simple words [8] describing its chemical components with the limited chemistry knowledge of those days. He prescribed vinegar for a long list of diseases ranging from digestive problems to skin abnormality. Hence, there are many beneficial uses for vinegar.