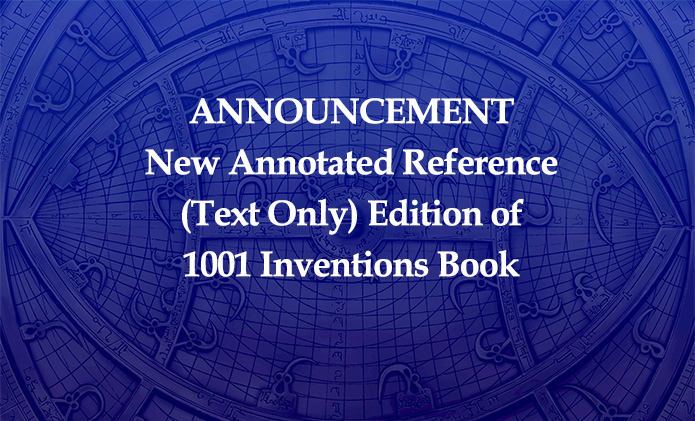 The Foundation for Science, Technology and Civilisation (FSTC) in partnership with 1001 Inventions announced today the planned publication of a new edition of the best-selling book 1001 Inventions: The Enduring Legacy of Muslim Civilization. More than one million copies of the previous three editions have been distributed around the world in many languages.

As HRH Prince Charles had then noted:

It is a matter of great pride that, although global in its outreach and operations, 1001 Inventions is in fact an initiative of a British-based team supported by a network of academics around the world. The 1001 Inventions exhibition, books and films have achieved significant success in popularizing public understanding of the cultural roots of science and, thereby, encouraging intercultural respect and appreciation.”

The eBook of the new edition will be available starting October 2017 as a text only annotated reference edition. Plans for a popular version in print are being finalised for 2018.

1001 Inventions: The Enduring Legacy of Muslim Civilization takes readers on a journey through history to discover remarkable achievements from the ‘Golden Age’ of Muslim civilization.

This fourth edition has been made available online to provide anyone anywhere, and more particularly students all over the world, with the possibility of broadening their appreciation of the contributions to science during the Golden Age of Muslim civilisation, and to see it as part of the main history of intellectual culture.”

While seeking to redress some of the neglect of science in Muslim Heritage, our work strongly acknowledges the Muslim debt to other civilizations; Chinese, Hindu, Greek, Roman, Egyptian, Mesopotamian as well as the modern Western civilization. We particularly acknowledge our debt to Western scholarship that has enlightened us on the merits and accomplishments of Muslim civilization. This new edition owes in very large measure to the many colleagues (see list below) who made it possible.”

The book uncovers groundbreaking scientific and technological advances made during a thousand-year period from the 7th century onwards. Through its seven main sections, it covers diverse aspects of life relevant to our every day lives including home, school, hospital, market, town, world and universe. It ends by a chapter entitled Wealth of Knowledge giving short biographical notes on significant scholars of various faiths embraced by Muslim civilisation and on various related European scholars of the time.

This new edition of the book casts new light and delivers new insights, and includes many new sources, extensive references and footnotes. The many scholars who reviewed the previous edition helped draw attention to many shortcomings and added so much valuable material to the previous editions.

FSTC decided to publish the Reference edition online, with extensive footnotes and annotations, in order to provide scholars the opportunity to review the book before the planned release of the popular edition in 2018.

This new edition will continue to support the 1001 Inventions global exhibitions that are touring the world and the eBook’s release is in conjunction with a 1001 Inventions exhibition launching at the Michigan Science Center from October 7, 2017 through January 7, 2018.

eBook will be available in October, 2017.

FSTC is a UK-based research and publishing educational non-religious non-political entity, which was formed in 1999 to popularise, and promote an accurate account of historical contributions from Muslim and other cultures to science, technology and civilisation. It is a non-profit organisation that boasts an international board of trustees, advisors and learned scholars and dignitaries.

It brings together a unique online community of Muslims and non-Muslims at www.MuslimHeritage.com, a website dedicated to raising awareness of the contributions of male and female scholars of different faiths from Muslim civilisation. It organises conferences, develops resources, provides lectures, and delivers training courses on a wide variety of topics deriving lessons from the past for building a better future. .

1001 Inventions has engaged with over 350 million people across the globe working with a network of international partners, including UNESCO, National Geographic and the academic organisation FSTC to produce interactive exhibits, short films, live shows, books and classroom learning materials that are being used by hundreds of thousands of educators around the world.

The publisher thanks the scholars who reviewed various sections and chapters of this new edition, each in their respective specialty. In alphabetical order, they are: