Kitab Al-Ma'a, a strange title for the first known Encyclopedia of Medicine arranged according to the alphabet was recently discovered in Algeria and published in Oman. Contains over 900 pages and was written by Ibn Al-Thahabi (died 1033AD). 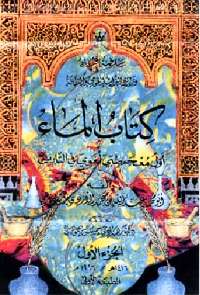 Kitab Al-Ma’a (The Book of Water) appears to be a strange title for the first known Encyclopaedia of Medicine arranged according to the alphabet.

It was recently discovered in Algeria and published in Oman.

The author’s apparent reason for naming the book as Kitab Al-Ma’a was because the word Al-Ma’a (the water) appears first in the book.

He was actually born in the city of Suhar, Oman. He moved to Basra then to Persia where he studied under Al-Biruni and Ibn Sina. Later he migrated to Bait Al-Maqdis (Jerusalem) and finally settled in Valencia.

The manuscript contains about nine hundred pages. Under each letter of the alphabet, there are names of an illness, a medicine, a physiological process or a treatment. This is the first known alphabetical classification of medical terms. In this encyclopaedia, Ibn Al-Thahabi not only lists the names but adds numerous original ideas about the function of the human organs. Indeed, he offers an original idea of how vision takes place. He described how seeing is a process of an image which goes through the pupil of the eye and strikes the vision nerves. The brain, then, unifies the two images into one and stores it in its memory bank. Such an explanation resembles the vision theory of Ibn Al-Haitham who died in 1040, just 33 years before the death of Ibn Al-Thahabi. However, it is not certain whether they met or were aware of each other’s work.

The book contains treatments, usually herbal, of a vast number of ailments and diseases. It also contains a course for the treatment of psychological symptoms. The main thesis of Ibn Al-Thahabi’s medication is that cure must start from controlled food and exercise and if the problem persists then use specific individual medicines and if it still persists then use medical compounds.

The manuscript has recently been edited by Dr. Hadi Hamoudi and published by the Ministry of National Heritage and Culture, Oman, 1996.