Syria in the 14th century was the scene of the most sophisticated developments in astronomy anywhere in the world. Shams al-Din al-Khalili was a muwaqqit, or mosque astronomer, in Damascus in the middle of that century. He was a colleague of the better-known Ibn al-Shatir, whose new planetary models were adopted 150 years later by Copernicus, and who constucted the most sophisticated sundial known to us. He was also a late contemporary of Ibn al-Sarraj of Aleppo, who constructed the most sophisticated astrolabe ever conceived, universal, that is, serving all terrestrial latitudes, in five different ways.

[This feature was prepared by Prof. David A. King of Frankfurt. His research since about 1970 has focussed on what he calls “astronomy in the service of Islam“, a topic mainly neglected by other historians more interested in planetary astronomy or theoretical astronomy or transmission or patronage. He has worked on Arabic scientific manuscripts and on Islamic astronomical instruments in libraries and museums all over the world and has published a dozen books and over 200 articles relating to Islamic astronomy. His website is www.davidaking.org.]

Al-Khalili’s most remarkable achievements were the compilation of two sets of universal tables. The first of these were tables for solving all of the standard problems of spherical astronomy for all latitudes. For example, the tables can be used to find, without any calculation beyond interpolation, the time of day for any solar altitude, for any solar declination (corresponding to the date in the solar year), and for any terrestrial latitude. The second of these was a table displaying the qibla in degrees and minutes for each degree of latitude and each degree of longitude (within the medieval world). In addition al-Khalili compiled a new set of tables for finding the times of prayer for the latitude of Damascus.

Al-Khalili’s corpus of tables was discovered in a manuscript preserved in the Bibliothèque nationale in Paris in 1970. At the time it was not known that ANY tables like this had been prepared by Muslim scholars. Since then we have discovered in the manuscript sources several other copies of al-Khalili’s table and numerous sets of tables of the same kind, but al-Khalili’s tables for timekeeping and the qibla are far superior to any of the others. In the sequel we present three studies on these tables, accessible below.

The second is “al-Khalîlî’s Auxiliary Tables for Solving Problems of Spherical Astronomy“, Journal for the History of Astronomy 4 (1973), pp. 99-110.

For further reading on all known Islamic tables for timekeeping by the sun and stars, including those of al-Khalili, see In Synchrony with the Heavens – Studies in Astronomical Timekeeping and Instrumentation in Islamic Civilization, vol. 1: The Call of the Muezzin, and vol. 2: Instruments of Mass Calculation, Leiden & Boston: Brill, 2004-05. More of the author’s studies, including the three articles accessible here, are reprinted in four volumes by Variorum: Islamic Mathematical Astronomy (1986/1993), Islamic Astronomical Instruments (1987), Astronomy in the Service of Islam (1993), and Islamic Astronomy and Geography (2011). 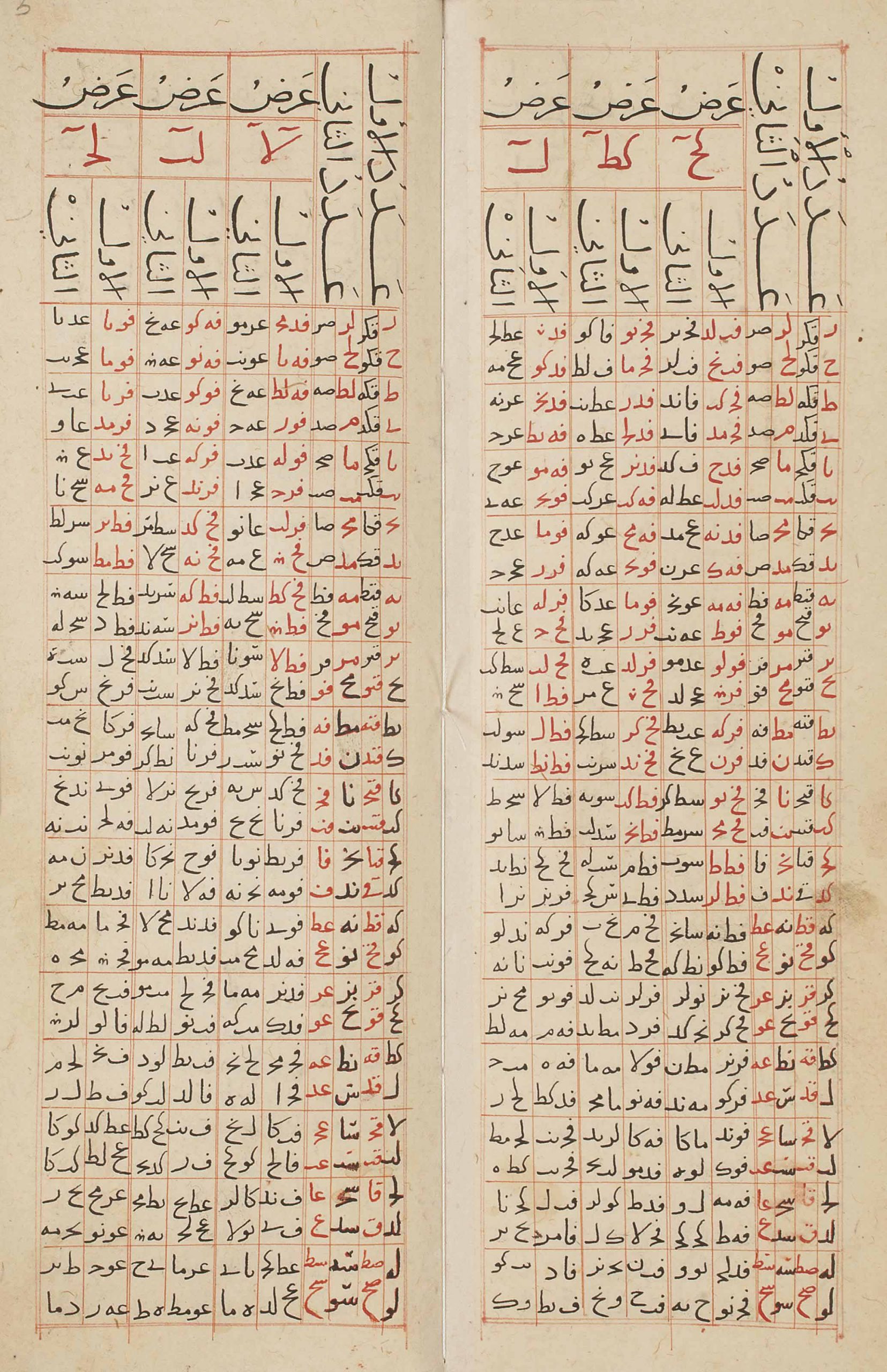 Astronomical tables of Shams Al-Din Abu ‘Abdullah Muhammad bin Muhammad bin Muhammad al-Khalili late Mamluk or early Ottoman, Syria, late 15th or 16th century. (Source) An extract from al-Khalili’s universal table for the qibla for the whole classical/medieval world. The values are in degrees and minutes for each degree of latitude from 10° to 56° and for each degree of longitude difference from Mecca from 1° to 60°. Altogether there are over 4,000 such entries and these are mainly accurately computed or in error by ±1 or ±2 minutes. The values shown here serve latitudes 28°, 29°, … , 33° and longitude difference 1°, 2°, … , 60°. The format of the tables exploits the symmetry of the qibla function on either side of the meridian of Mecca (with longitude 67°, according to the medieval convention). This splendid manuscript was copied in Damascus around the year 1400 (Source)

What is spherical astronomy?

The position of localities on earth is defined in terms of longitude and latitude relative to the terrestrial equator. We call these “coordinates“. Spherical astronomy, which concerns us here, is the study of the apparent rotation of the heavens – represented by a sphere – about the observer, which takes place about a celestial axis whose altitude above the horizon is equal to the latitude of the locality, or, in other words, parallel to the celestial equator. This branch of astronomy essentially involves the conversion of coordinates between three systems: the horizon-based coords of altitude and azimuth; the ecliptic-based coords of celestial longitude and latitude; and the celestial equator-based coords of ascension and declination. So, for example, the observer (at a specific latitude) can measure the altitude (above the horizon) of the sun (measured on the ecliptic) or a star, and convert this into a measure of time (measured on the celestial equator). He/She can achieve this either by calculation using trigonometric tables, or by using astronomical tables, or by means of an astrolabe together with a plate for his/her terrestrial latitude.

Muslim astronomers concerned themselves with these problems from the 8th to the 19th century. They excelled in producing trigonometric tables, tables for astronomical timekeeping, and varieties of instruments for facilitating the determination of time from celestial configurations. In particular, they produced tables and instruments that were universal, that is, serving all latitudes.

The determination of the qibla or local direction of Mecca is a problem of terrestrial geography. However, Muslim astronomers sometimes found it convenient to consider the qibla as a problem of spherical astronomy: the problem was then to determine the direction from the zenith of a locality to the zenith of Mecca. This they were able to solve using geometry or trigonometry or even special maps. Again, the most remarkable solutions to the qibla problem, dating from the 9th century onwards, are universal tables that display the qibla in degrees and minutes for each degree of longitude and each degree of latitude. Muslim astronomers in the 10th and 11th centuries even conceived of Mecca-centred world-maps with highly sophisticated cartographic grids that preserved direction and distance towards Mecca.

astrolabe: a 2-dimensional model of the 3-dimensional celestial sphere, with a movable part (rete) featuring the ecliptic and various bright stars and a fixed part (plates for individual latitudes) showing the horizon and meridian as well as altitude and azimuth circles for a specific latitude
astronomy, spherical: the study of the mathematics underlying the celestial sphere
axis, celestial: the imaginary axis about which the heavens appears to rotate
azimuth: the direction of a celestial body measured along the horizon (from Arabic al-sumût < samt, “direction“)
azimuth of Mecca: translation of samt Makka, also called inhirâf al-qibla in medieval Arabic, literally “deviation of the qibla from the local meridian“
coordinates:  here, the definition of the position of any point on the terrestrial sphere or celestial sphere by means of one measurement along the principal circumference and another perpendicular to it – compare terrestrial longitude and latitude, and ecliptic longitude (sun, moon and planets) and latitude (moon and planets)
ecliptic: the apparent path of the sun against the background of the stars, conveniently all on the celestial sphere – see also zodiac
equator, celestial: the great circle of the celestial sphere perpendicular to the celestial axis
qibla: the sacred direction of prayer and various other ritual acts towards the Kaaba in Mecca
sphere, celestial: an imaginary sphere of arbitrary radius encircling the observer at the centre, on which all celestial bodies appear to be fixed (stars) or moving (sun, moon and planets)
trigonometry, plane / spherical: the mathematics of angles / arcs, involving functions such as the sine and cotangent (labelled here Sine and Cotangent since the  functions used in medieval times were to base 60 rather than unity, as we use today)
zenith:  the point on the celestial sphere directly above the observer (samt al-ra’s in Arabic)
zodiac: the belt of the heavens straddling the ecliptic within which the moon and planets appear to move, divided historically according to 12 constellation figures