On December 7, 2011, Dr Ahmad Almansour presented a lecture at the Faculty of Policy and Management, Keio University, Japan on "1000 years of Inventions and Innovations: Discover the Muslim Heritage in our World." 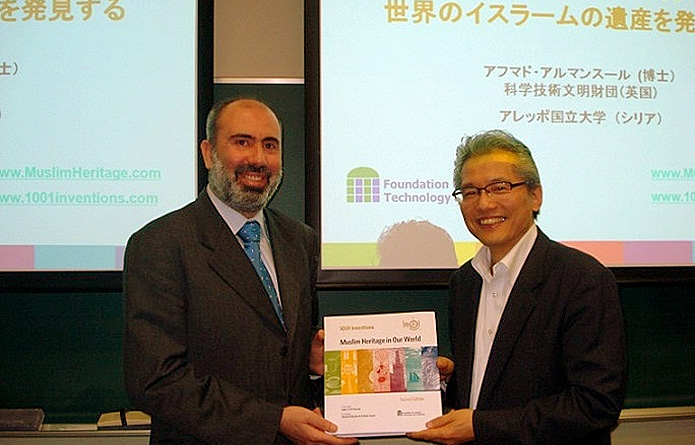 On December 7, 2011, Dr Ahmad Almansour presented a lecture at the Faculty of Policy and Management, Keio University, Japan on “1000 years of Inventions and Innovations: Discover the Muslim Heritage in our World”. At the beginning, Dr Almansour showed the audience the film produced by 1001 Inventions, 1001 Inventions and the Library of Secrets (see the film Library of Secrets – Live). Then he presented a lecture in which he spoke about the gap in the history of science and civilizations as taught to children in school. He gave some examples of misleading information from the internet which we find even in Japanese Language websites. For example, one Japanese site speaking about Ibn al-Haytham used the term setsu which means “theory” and goes further to claim that the information according to which Ibn al-Haytham is the inventor of the first idea of the camera is not proved. On the other hand when the website speaks about Leonardo Da Vinci, he is credited in very positive terms with being the first discoverer of many inventions.

Dr Almansour then moved in his talk to introduce the importance of Muslim Heritage to the present world by showing some of the Al-Jazari machines and also touching on other areas.

The talk ended with the explanation that good deeds are not limited to religious actions; rather they are any deed that leads to the prosperity of humankind. During the ensuing discussion, the guests asked questions and made comments, such as:

1. Why do you think Europe and the West were trying to hide this fact from their children and the rest of the world?

2. What reasons were behind the decline of Islamic civilization?

3. One comment was that it seems that Muslim scholars have given their knowledge to the world without caring about intellectual property rights. The advanced world is not very strict with IPR, and some developed countries cannot afford that.

4. Another comment was about how the Japanese Government and education authorities are trying their best to introduce all civilizations to children.

The lecture presented by Dr Almansour had great impact, especially as it was delivered entirely in Japanese. The audience was very interested by the movie 1001 Inventions and the Library of Secrets; many were laughing during the show.

This lecture was limited to post graduates, researchers and Faculty staff. Immediately after the lecture, Dr Almansour was asked to deliver the same lecture to a wide range of audiences. Arrangements were made to organize the next lecture in early January 2012.

One researcher was very much interested in the lecture. He sent me a message saying: “Now I’m so much interesting in the history of the technology, I will read papers and publications regarding the issue. I’m so glad if I collaborate with your research project.”

Finally, copies of the book 1001 Inventions: Discover Muslim Heritage in our World published by FSTC (edited by Professor Salim Al-Hassani, second edition 2008) were presented to the main library of Keio University.