by The Editorial Team Published on: 7th December 2014

President of FSTC, Professor Salim Al-Hassani, was invited to take part in an event entitled the “Turkish Innovation Week” in Ankara from 19th to 21st November, 2014. This event was organised by the Turkish Exporters’ Association named TIM. The main focus of the 3 days long congress was to promote greater levels of entrepreneurship and innovation in Turkey with the main body of attendees at the event being third level students from universities in Turkey. The remainder of the attendees consisted of senior business people with a background in innovation and technology, the two main themes of the event, and members of the ministries. 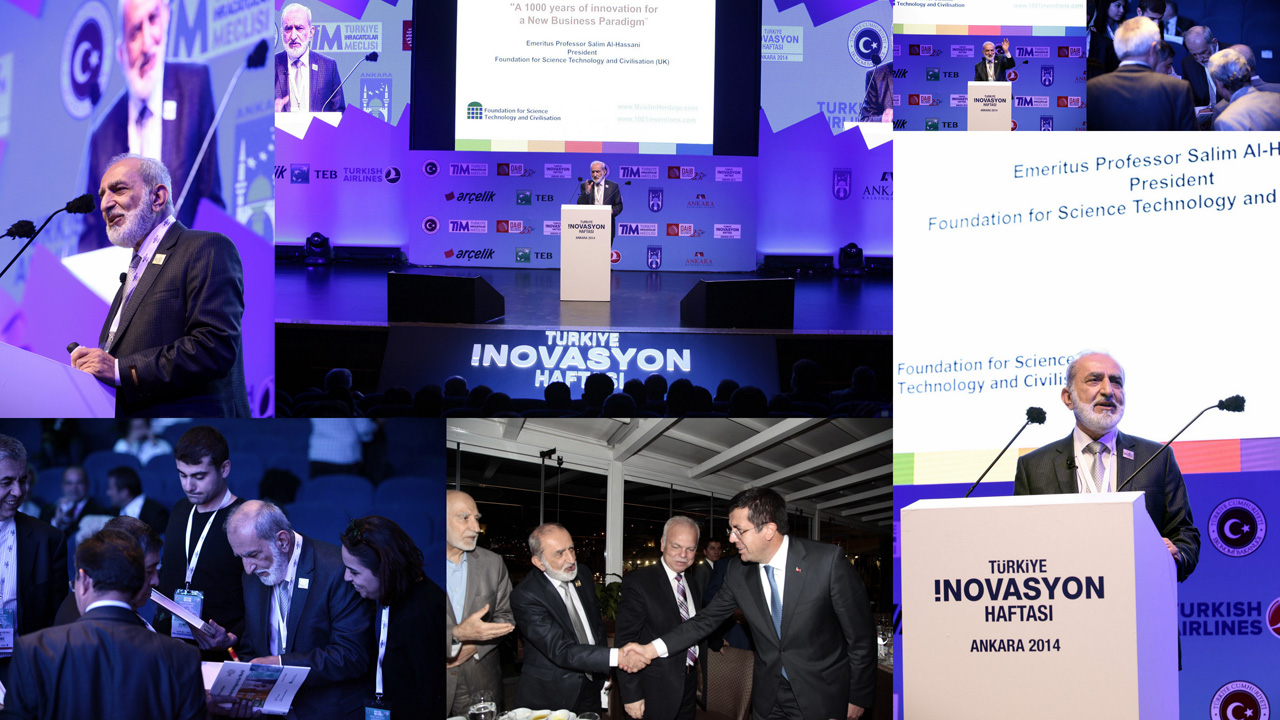 Whilst discussions regarding the financial climate in Turkey continue, this event on finding innovative ways to revive and/or enhance Turkey’s business and entrepreneurship seemed to be held at a most opportune time. Other speakers included Economy Minister Nihat Zeybekci, Irish Business and Employment Minister Ged Nash, various scientists, industrialists, entrepreneurs, academics and writers of one who was Professor Al-Hassani.

Professor Al-Hassani’s exciting speech “A 1000 years of innovation for a New Business paradigm”, though concerning celebrated personalities from the academic and business world in Muslim civilisation, superseded the sole mention of tradespeople or investors making profit. On the contrary, they highlighted the ethics and morals which helped them contribute towards science alongside humanity. Furthermore, Professor Al-Hassani highlighted that the underlying reason behind these big strides in creation and development are not just due to our efforts, rather it is also due to the hard work carried out by scientists originating from former civilisations. As Sir Isaac Newton once famously remarked “I can see thus far because I am standing on the shoulders of giants.”

Examples of works developed and/or discovered by multicultural and multi-religious men and women in Muslim civilisation included Al-Jazari’s “Elephant clock”, Al-Zahrawi and the discovery of using catgut in surgery, as well as Fatima al-Fihri’s founding of what is now believed to be one of the degree awarding universities in the world.

Additional themes and messages Professor Al-Hassani proceeded to highlight mentioned how the waqf (charity) not only supported the vulnerable in society but also funded scientific and knowledge seeking projects.

Professor Al-Hassani’s concluding remarks drew the audience’s attention to the incentives that drove great inventors and scholars from various cultures. He identified a number of them whose behaviour and writings demonstrate noble and non-materialistic objectives. One can see abundant evidence that their aim was, in the main, to improve the quality of life. He advised that we take lessons from the past to develop a better and prosperous future and to note that those men and women of different faiths built upon past ideas and generated thousands of new scientific inventions and beneficial innovations that transformed their world. Professor Al-Hassani advised that the present mind-set of the younger generation would need to re-perceive the past so that they may build a better future. The world needs a new business paradigm; one that is ethically guided and culturally rooted.

Islamic Manuscripts in the Schoenberg Collection at Pennsylvania University