The madrasas of the early Ottoman period can be considered as institutions continuing in the established educational tradition that had been practiced in such pre-Ottoman cities as Amasya, Konya, Kayseri, Karaman and Aksaray. Such scholarly activity in Anatolia was made possible by the contributions of scholars coming from the most important cultural centres of the time in Egypt, Syria, Iran and Turkestan.

The madrasa system inherited from the Seljuk Turks continued in existence augmented by the contributions of the Ottomans. The construction of a mosque and alongside it a madrasa had become a tradition in places conquered by the Ottomans, an integral part of their policy of conquest. This tradition was geared both to the provision of the necessary religious, scientific and educational services for the society and the state as well as for training administrative and legal personnel for the state administration. It was in this fashion that the Ottoman state was able to provide itself with educated personnel for its activities, individuals who were both knowledgeable in their areas of competence and at the same time able to perform their duties both in terms of the requirements of Islamic jurisprudence and customary practice. This tradition ensured that the central administration of the state was well founded and strong.

The first Ottoman madrasa was established in Iznik (Nicea) by Orhan Gâzî. This ruler had a new madrasa building constructed there immediately after the conquest of the city (1330-31).[1] After Orhan Gâzî had arranged to have a sufficient number of wakifs attached to the madrasa to meet its financial needs, he appointed as teacher and trustee Mevlânâ Dâvud al-Kayserî (d. 1350-51) who had completed his education in Egypt. Great scholars of the period such as Dâvud al-Kayserî and his successors, Tâceddin al-Kürdî and Alâeddin Esved (d. 1393) all taught at this madrasa.[2]

Until the time when the scholars educated at the Ottoman madrasas were in a position to be appointed as teachers, the first teachers at the Ottoman madrasas were either those who were born and raised in other parts of Anatolia, or those who were born in Anatolia and were educated in Islamic cultural centres such as Egypt, Iran and Türkistan (Turkestan) and then returned to Anatolia, or those who were born and educated outside of Anatolia and who later came to the Ottoman country. Of the 115 scholars who were determined to have received education in Anatolia or in other Islamic countries between the fourteenth and sixteenth centuries, the percentages according to countries or regions of origin are as follows: Iran is in first place with 43.3 percent, Egypt is in second place with 23.4 percent, followed by Anatolia with 14.7 percent, Transoxiana with 8.6 percent, Syria with 7.8 percent and Iraq with 1.7 percent. During the same centuries, when the countries of the authors of the thirty-three textbooks taught on various subjects at the Ottoman madrasas are examined, it is observed that various Islamic cultural centres were the source of the development of Ottoman education. According to a statistical research made on this subject Iran was still in first place with 39.3 percent. Egypt was in second place with 30.3 percent. It is observed that Transoxiana, Iraq, Khorezm and Fergana each had 6.06 percent and that Anatolia and Khorasan had 3.03 percent.[3] 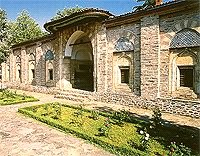 It appears as if the education offered in the madrasas was left entirely up to the initiative of the teachers appointed who would, following the tradition, be obliged to proceed within the framework of the conditions laid down by the wâkif (the founders of the wakf). For example, in the charter of the Iznik Orhan Bey Madrasa, other than the prescription that “instruction should be given on a daily basis to the students” there appears to be no other restrictive statement.[4] In the charter of the Bursa Lala Sâhin Pasha Madrasa, founded in 1348, it is stated “the teacher should be very knowledgeable and articulate and must not miss any classes without a legitimate excuse other than on holidays”. In addition to a specification by Murâd II in Edirne to the kind of lessons to be given at the Dâr al-Hadis Madrasa, it is also indicated that the instructors should be giving lessons in Hadith and complementary studies, but that in particular they should not be occupying themselves with philosophical studies in their classes.[5] In the charter of the Akmadrasa established in 1415 by Karamanoglu Ali Bey in Nigde, it is stated that “this madrasa is devoted to fakîhs and mütefekkihas (jurists and students of jurisprudence) engaged in Islamic legal studies (ulûm-i ser’iyye) and to married persons, bachelors, boarding students and day students who are engaged in literary studies required for religious studies and to teachers and tutors instructing according to the Hanefî and Shafi schools of law. The teacher should lecture every day on the subjects of fikih, legal theory and methodology (usûl-i fikih) as well as on matters pertaining to canonical law and other higher studies, whereas the tutor should go over the lessons with the students every day, engaging them in discussion…”[6] These statements are important in terms of bringing some clarity to the basic features of the traditional madrasa system prior to the Sahn-i Samân madrasas founded by Mehmed the Conqueror.

As is quite clear from the examples given above, education in Seljuk madrasas and those pre-dating Mehmed the Conqueror was pursued in terms of the traditions of the Nizâmiye madrasas. Their major goals were the teaching of religious studies and in particular fostering the study of fikih. However, the fact that hospitals were established alongside certain Seljuk madrasas and that sites for astronomical observation have been found next to others, gives us some indication that there was an interest in medicine and astronomy in those madrasas. Education in philosophy, mathematics and the natural sciences, which do not fit in the category of religious studies, was, during the Seljuk and pre-Mehmed II period, given in the homes of scholars or at hospitals following a tradition of great longevity. There is also some indication that some of these sciences were taught as extra curricular activities in Anatolian Seljuk madrasas.

From the beginning of the fourteenth century until the beginning of the reign of Mehmed the Conqueror there were a total of forty-two madrasas in the major cities: twenty-five in Bursa , thirteen in Edirne and four in Iznik. During the same period we note the existence of forty madrasas in smaller cities.[7] In short, the fact that between the years 1331-1451, during the period when higher education in the Ottoman Empire was in its initial stages, a total of eighty-two madrasas were founded, is an indication of just how rapidly the worlds of education and the sciences were developing in Ottoman society. This would mean that on an average at least two madrasas were being established every three years. As the numbers of madrasas grew in particular cities, a need began to arise to rank the institutions in relation to each other. The ranking of madrasas according to their status in the period prior to Mehmed II (the Conqueror) made more apparent the differences among those institutions.